Accessibility links
Cheap Eats: A Cookbook For Eating Well On A Food Stamp Budget : The Salt A Canadian scholar was unimpressed with the cookbooks available for people on food stamps in the U.S. So she decided to come up with her own set of tips and recipes for eating well on $4 a day. 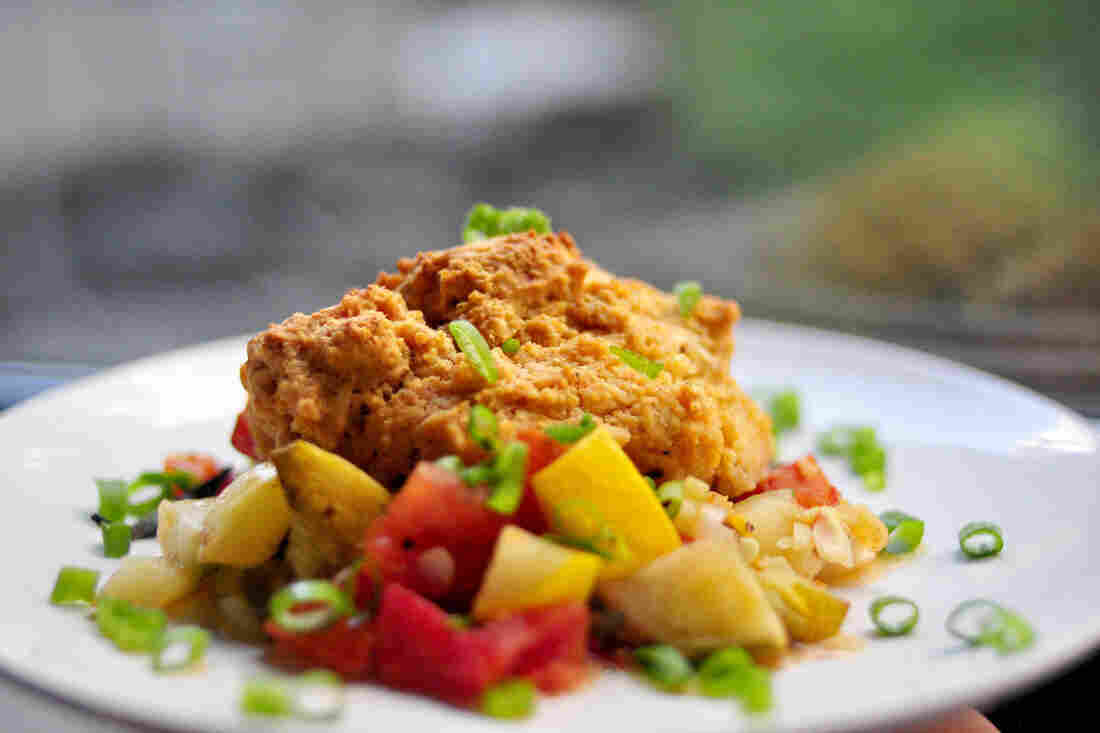 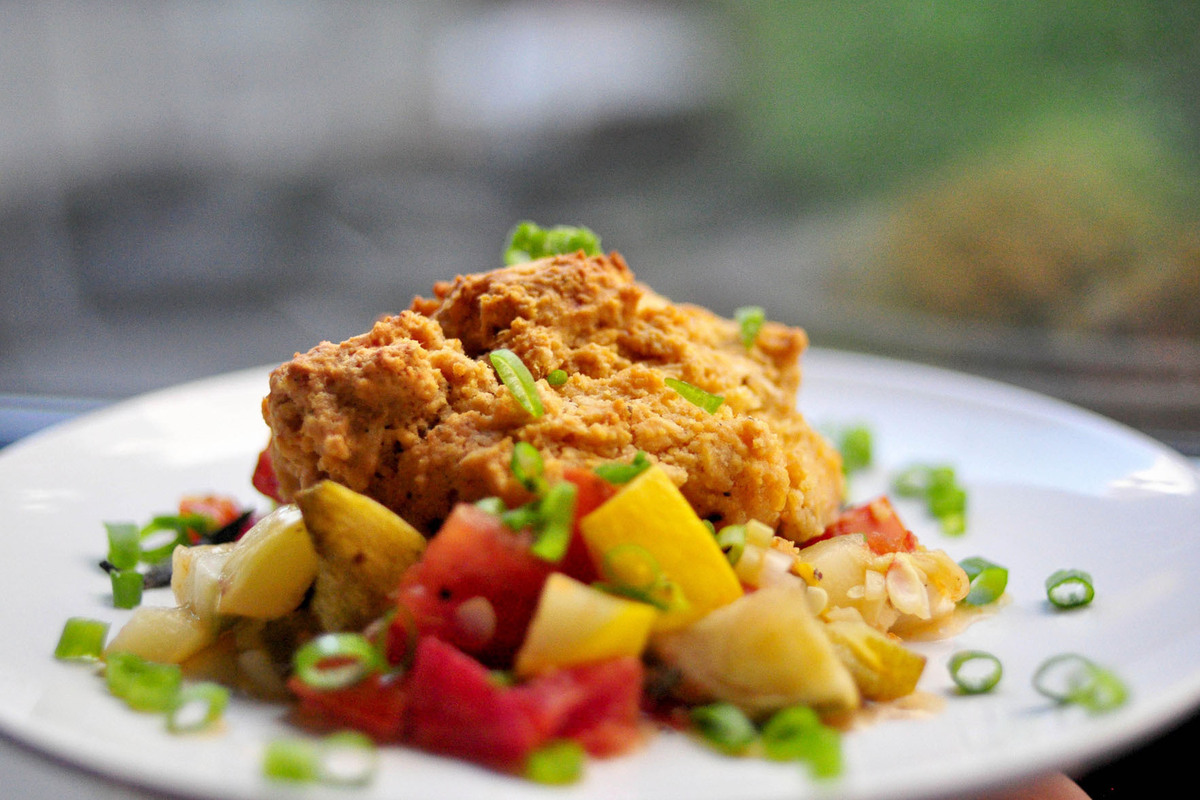 The Savory Summer Cobbler from the Cheap and Good cookbook features seasonal vegetables under a peppery biscuit crust.

When Leanne Brown moved to New York from Canada to earn a master's in food studies at New York University, she couldn't help noticing that Americans on a tight budget were eating a lot of processed foods heavy in carbs.

"It really bothered me," she says. "The 47 million people on food stamps — and that's a big chunk of the population — don't have the same choices everyone else does."

Brown guessed that she could help people in SNAP, the federal government's Supplemental Nutrition Assistance Program, find ways to cook filling, nourishing and flavorful meals. So she set out to write a cookbook full of recipes anyone could make on a budget of just $4 a day.

The result is Good and Cheap, which is free online and has been downloaded over 700,000 times since Brown posted it on her website in June 2014. A July 2014 Kickstarter campaign also helped her raise $145,000 to print copies for people without computer access. And on July 21, the second edition was published with 30 new recipes.

Advice For Eating Well On A Tight Budget, From A Mom Who's Been There

So what are Brown's secrets to eating well on $4 a day? It's about stocking the pantry with cheap basics to build meals from: things like garlic, canned vegetables, dried beans and butter.

She also emphasizes flexibility, and avoids prescribing strict meals and methods. That means lots of options for substitutions, especially when it comes to the produce aisle, where prices can fluctuate based on season and availability. Each meal is priced out by serving.

Last July, Deborahmichelle Sanders, 63, of San Francisco turned to the cookbook and found an intriguing recipe: cornmeal crusted vegetables with an Asian-inspired peanut sauce for dipping.

Since she couldn't afford the suggested beans or peppers, she tried carrots. The result? "It's so wonderful," she tells The Salt.

SNAP currently provides 46.2 million low-income people like Sanders with a monthly average stipend for food of $126 in the form of a debit card. They can take it to the grocery store, pick out their food and swipe the card at the register. 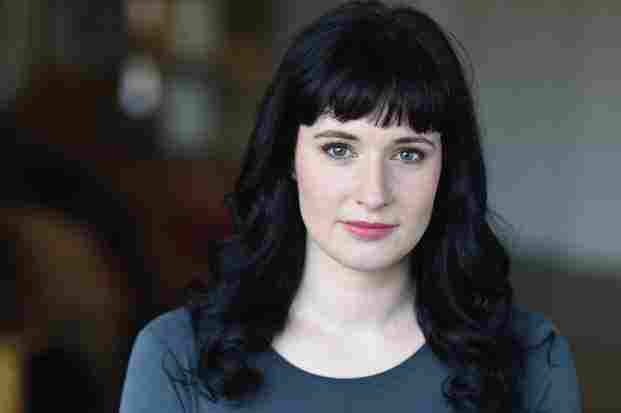 SNAP has no equivalent in Brown's home country of Canada; its public assistance programs are more flexible, she says. And she wasn't impressed with what she found when she went looking for resources for people in the U.S. program on how to cook well with the benefits.

"Tons of organizations are doing amazing, useful work, but usually their recipes can sound sort of preachy, or else they're very governmental," she says. Brown thinks the cookbooks that exist try to tell people the right way to live their lives — explaining what exactly they should eat and how exactly they should prepare it — and that often turns them off to the recipes.

"As much as a recipe book, [Brown's book] is an idea book," says Brenda Mahoney of Dallas, another woman in SNAP who's using the book. In fact, some of Good and Cheap's pages come with exactly that label: "ideas."

One page, titled "Leftovers," offers tips on the myriad ways to make good use of old meals, like putting the fixings you originally used to top toast in a wrap or on a pizza, or turning almost anything into a sandwich. Another called "Popcorn!" recommends livening up the familiar snack by adding spices.

Good and Cheap is also filled with beautiful photos — a visual feast, especially compared with the other recipe books tailored to people in SNAP. 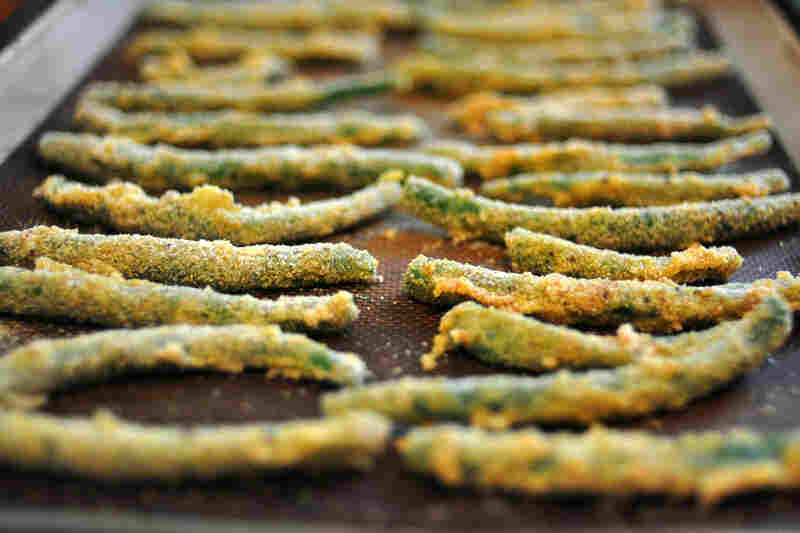 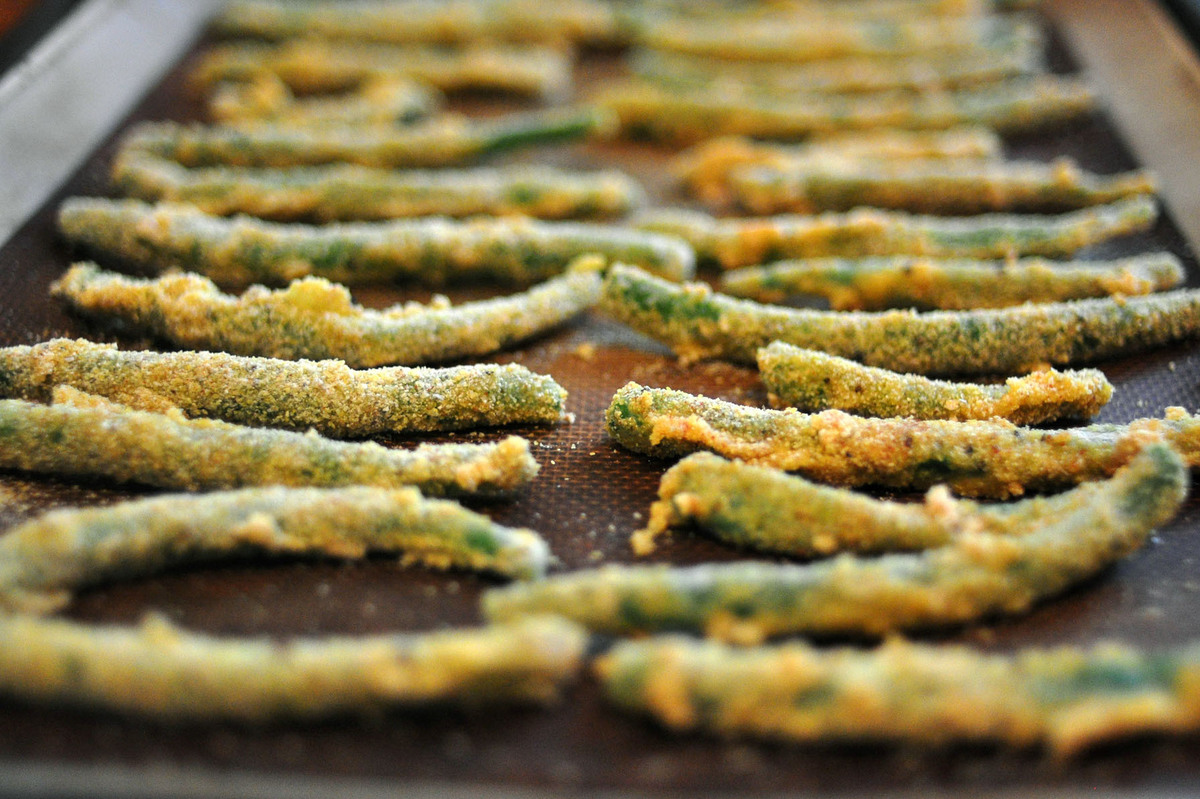 Cornmeal-crusted green beans from the Cheap and Good cookbook.

Take the U.S. Department of Agriculture's Tips for Healthy, Thrifty Meals. Orange lines and black bullet points fill up entire pages, with equally uninspiring sketches on the side.

And compare their Turkey Cabbage Casserole to Brown's Savory Summer Cobbler, which both Sanders and Mahoney cite as their favorite dish. Even the name draws a reader to the recipe, which features seasonal vegetables under a peppery biscuit crust. The lush photo that accompanies it on the page doesn't hurt.

"You choose what vegetables you want, so I used tomato and a green-striped crookneck squash, which was the cheapest I could find," says Sanders. "It is so, so good."

"My kids loved the recipe," she says.

Mahoney cooks for her two children and herself, much like Mia Pickering, who lives in Seattle with her two teenagers. Sanders, Mahoney and Pickering have all been on SNAP for a number of years, and they say Good and Cheap, which they discovered online, works better for them than anything else they've been able to find. And that's important when what they can cook determines how well they and their families can eat.

Pickering thinks so, too. For her, it's easier to cook fresh than heat up frozen meals. It means she and her children throw less food away and exercise better portion control.

"Many authors have tried hard to come up with cheap meals, but they taste so bad. Leanne is so gifted. It's just incredible," says Sanders.

Sanders has been cooking since the eighth grade, so that's not a snap judgment.

For every copy purchased of the just-published second edition, one copy will be donated through Access Wireless to low-income Americans, Brown says. The books are being distributed through groups like the Freestore Foodbank in Cincinnati.