Accessibility links
Me-Tea-Morphosis: Tea Bags Get Second Life As Works Of Art : The Salt Artists are reinventing the humble tea bag, letting its contents and simple shape and color shine in beautiful, fragile art. Some are even farming out the tea drinking to get to the used bags.

Me-Tea-Morphosis: Tea Bags Get Second Life As Works Of Art

Me-Tea-Morphosis: Tea Bags Get Second Life As Works Of Art 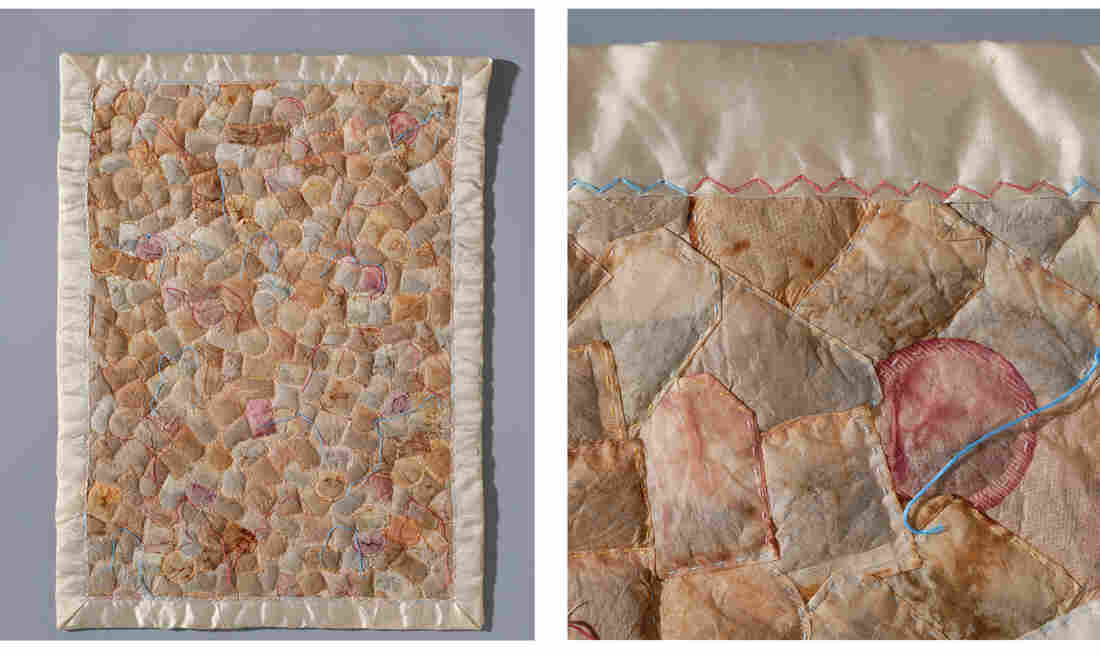 Artist Ruth Tabancay has played up the comforting nature of tea through a series of quilts made out of tea bags. Like quilts, she says, "I felt that tea bags carried with them connotations of warmth and intimacy." Dana Davis/Courtesy of Ruth Tabancay hide caption

Though tea strainers often come in brightly colored, sweet packaging with punny names like "the manatee," the lowly tea bag is often forgotten. Made from silk, plastic or paper, these bags are meant for one-time use only. Yet some artists are giving the tea bag a second life, letting their simple shapes and colors shine.

Colorado artist Wewer Keohane has been making art from spent tea bags for over 20 years. Sometimes she simply uses tea as a subtle dye, or pastes pieces of empty bags into an otherwise two-dimensional painting. 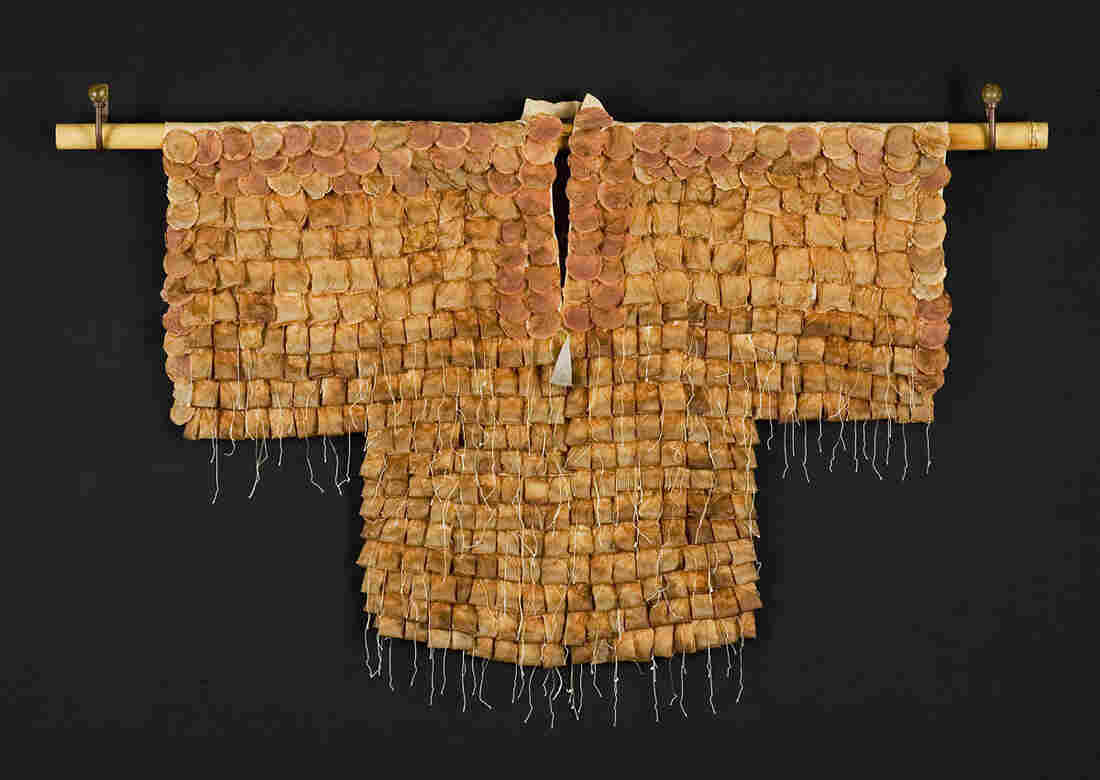 Tea Ceremony, a kimono made of used tea bags by Wewer Keohane. Much like a complex Japanese tea ceremony itself, Keohane says making her kimonos "is as much about the process as it is about the outcome." Courtesy of Wewer Keohane hide caption

But her most striking creations are tea bag kimonos. Each garb combines at least 600 steeped, dried and glued bags into a work of art that, while fragile, is actually wearable, too. The kimonos made from sturdier silk bags are better suited as actual apparel, Keohane says. As for the ones made from paper tea bags? "It would be risky — if someone hit you hard, you'd rip open," she says.

Ruth Tabancay of Berkeley, Calif., has played up the comforting nature of tea through a series of quilts made out of tea bags. Like quilts, she says, "I felt that tea bags carried with them connotations of warmth and intimacy."

Russian designer Andrew Gorkovenko created a packaging concept for TripTea using the tea leaves inside of tea bags. The illustrations are meant to represent the country of origin for individual teas. Here, his artwork for tea from Ceylon, with a detail at right. Courtesy of Andrew Gorkovenko hide caption

Over the past decade, she has expanded her repertoire outside of the colors dictated by the stain of the tea itself and started painting different bags with acrylic. These quilts are full-sized — some take as many as 1,400 tea bags to complete.

Tabancay uses pre-steeped tea bags, going so far as to farm out some of the tea drinking. When she came across a weaving school that was full of tea drinkers, she began supplying their tea in bulk — 250 bags at a time — and they, in turn, would save the bags and send them back to her.

But it's not just tea's delicate container that is finding its way into visual art. Russian advertising designer Andrew Gorkovenko has used dried tea leaves themselves to create dreamlike landscapes of the countries where individual teas are made. Taking inspiration from sandpainting, in which grains of sand, often colored, are corralled to create an image, Gorkovenko realized the same thing could be done with tea. 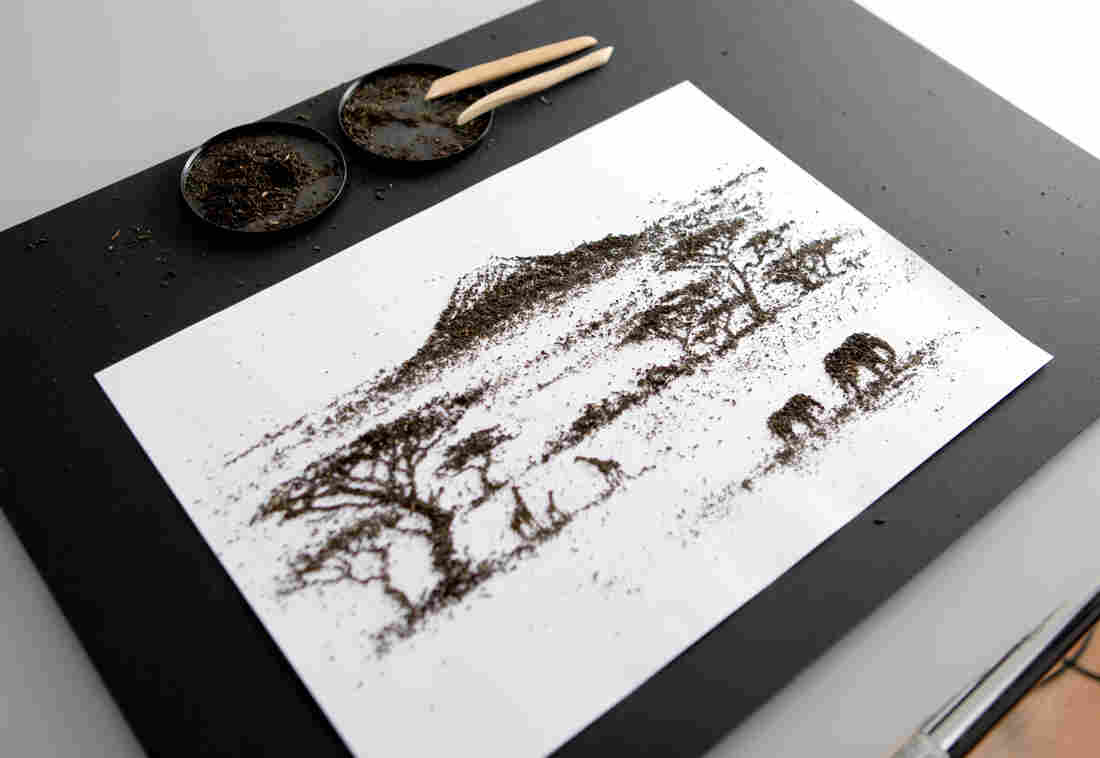 "A lot of people see this similarity, but tea is much more difficult to work with," Gorkovenko says. Unlike sand, he says, dried tea is not uniform in size and shape, so leaves have to be carefully selected to fit each part of the image.

Tea bag artists also tune in to the finer variations of tea. To achieve an overall effect that's more couture textile than tea, Keohane has become very familiar with the hues and shapes of bags from all over. The green teas, she says, do have a light green tint in the silk or nylon bags, while a harder-to-find blueberry tea ends up purple. She has made a red kimono from pomegranate teas. 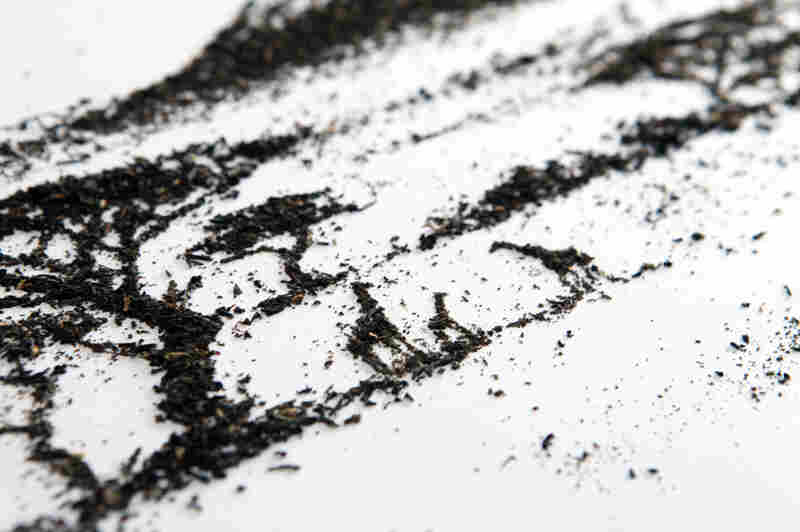 Of course, the sepia hue of black tea is the most familiar color. "People bring me tea bags from all over the country," Keohane says. To her, tea bags aren't common household objects but unique materials — each one with a slightly different heft, shape or hue.

Much like a complex Japanese tea ceremony itself, Keohane says making the kimonos "is as much about the process as it is about the outcome." She describes it as a meditative practice — tedious and often very slow (it took her months to make the first kimono), as it requires a great deal of patience to piece each one together.