Accessibility links
To Ease An Economic Meltdown, Zimbabwe Considers Returning Farmland : The Salt In 2000, the country launched a campaign that seized thousands of white-owned farms. The move helped send Zimbabwe into an economic tailspin. But now, some of those farmers may get that land back. 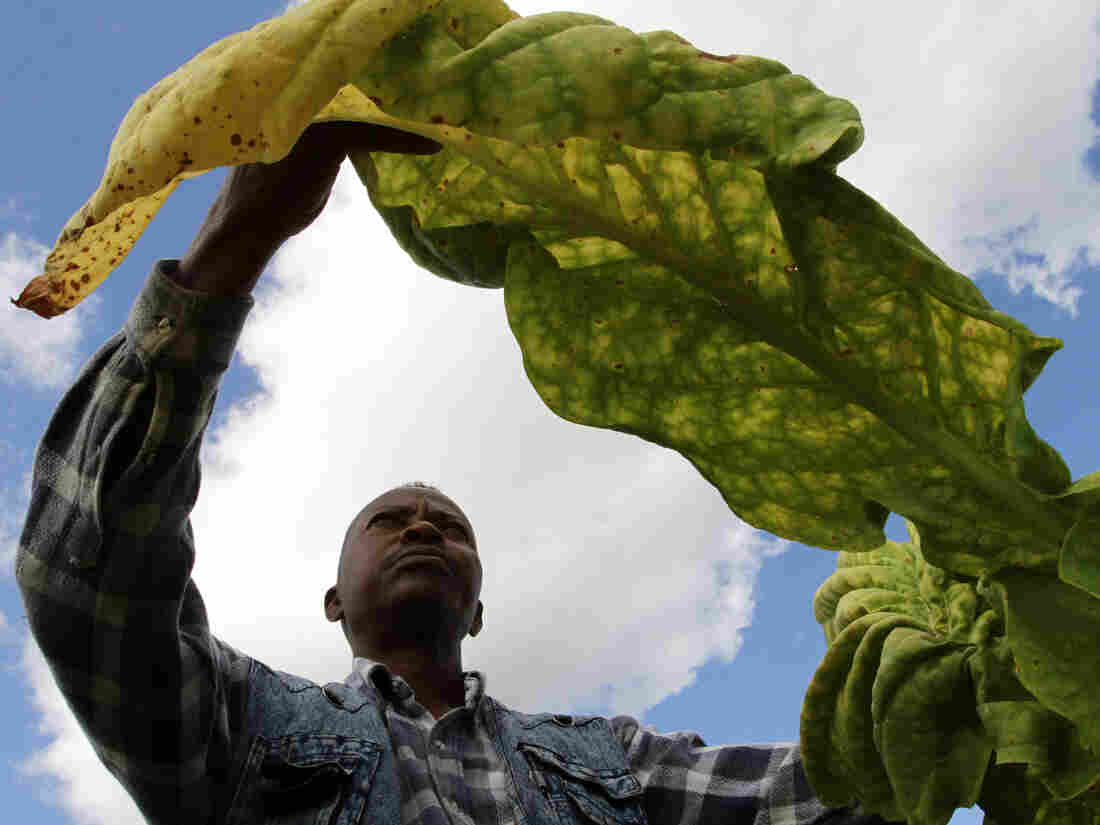 A farm owner inspects his tobacco crop in the sun. While Zimbabwe's tobacco production has made something of a turnaround lately, journalist Peta Thornycroft says much of the country's troubles since 2000 have been tied to failures in its capital-intensive tobacco farms. Philimon Bulawayo/Reuters/Landov hide caption 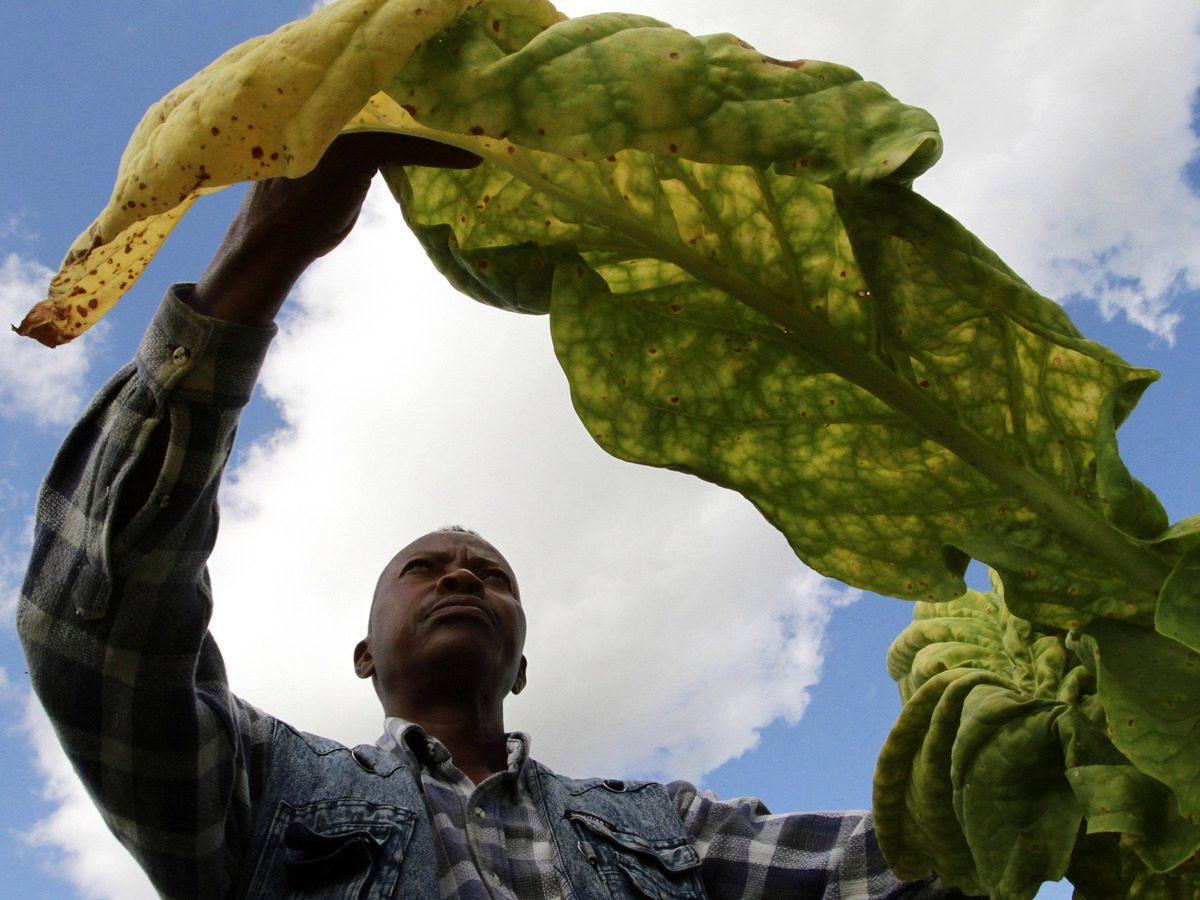 A farm owner inspects his tobacco crop in the sun. While Zimbabwe's tobacco production has made something of a turnaround lately, journalist Peta Thornycroft says much of the country's troubles since 2000 have been tied to failures in its capital-intensive tobacco farms.

It's been 15 years since Zimbabwe launched a campaign to seize large tracts of land from white farmers. At the time, more than 4,000 white-owned farms were taken; that land was to be given to disaffected war veterans, many of whom had little prior experience in agriculture.

The move proved to be a disaster. Many of those farms failed after they changed hands, and Zimbabwe fell into an economic tailspin. Even the country's longtime president, Robert Mugabe, admitted to failures in the program earlier this year.

Tobacco Is Smokin' Again In Zimbabwe

Lately, Zimbabwe has seen a turnaround in its tobacco production — output increased by 235 percent last year, when compared with 2009. But the country, once known as the breadbasket of Africa, continues to feel the effects of the meltdown. It is still forced to import most of its food.

Now, the government is suggesting that some of those white farmers may get their land back through 99-year leases. It's asking provincial leaders to provide a list of farms designated "of strategic importance."

To learn more about the decision, and the history behind it, NPR's Scott Simon talks with journalist Peta Thornycroft.

On who got the land 15 years ago

Fifteen years ago, individual groups of people who said they had fought in the liberation war against white minority rule began invading white-owned farms, and by the end of about four years, they had taken about 90 percent of them. There was a small number who survived all of those years and are still on their land.

In 2005, the government changed the constitution and nationalized all of white-owned commercial farmland, and most of it is occupied now by small-scale farmers. About 180,000 to 200,000 families got some of that land. And then there's about 18,000 to 20,000 wealthier guys who got bigger portions of land and are supposed to be the new commercial farmers in Zimbabwe.

On what's happened to the economy since then

To begin with, agriculture was the main anchor of the economy. Tens of thousands of hectares of land that was normally irrigated is no longer irrigated. Many of the valuable crops, like fruit trees, avocado pear trees have been lost. The country just began to collapse.

Tobacco produced 40 percent of Zimbabwe's foreign currency earnings, and tobacco is a difficult crop in that it's very capital-intensive. And it's a particular skill. It uses a great amount of heat to be cured. Zimbabwe's economy's collapsed because it had forward-sold its tobacco for many years, as it was such a reliable production from Zimbabwe.

As the foreign currency disappeared, so the black market of the Zimbabwe dollar increased. By 2008, you could go into a pub and order a beer, and if you stayed there too long, you would — the price would change in the afternoon.

On whether the former landowners would consider coming back

There are about 300 who remain on their farms despite harassment threats, eviction orders, etc. In one province alone, what the government did was offer six of them the right to remain on their lands with 99-year leases. They decided, in this province, that they were needed for particular reasons. One of them produces 10,000 day-old chicks a week and is seen as vital. Another one is a dairy farmer, and probably more dairy farmers have survived by sector than any other sector.

On whether Zimbabwe can feed itself today

Not this year and not last year and hardly ever since 2000. It hasn't even grown half what it needs to feed the population, and it will have to import the staple food, which is maize. And the price of the corn is of course much higher than it would be if it was grown in Zimbabwe. USAID [U.S. Agency for International Development] has put out warnings, and I'm watching the prices of food go up — and I'm also watching the availability of the food declining.

Owing to a technical error, the original comments for this story were disconnected from this page. Those comments are archived here.