Accessibility links
Heavy Loads Of Pollen May Shift Flight Plans Of The Bumblebee : The Salt Foraging bumblebees can pick up nearly half their weight in pollen before heading home to the hive, research shows. All that weight tucked into hollows on their hind legs can complicate flying. 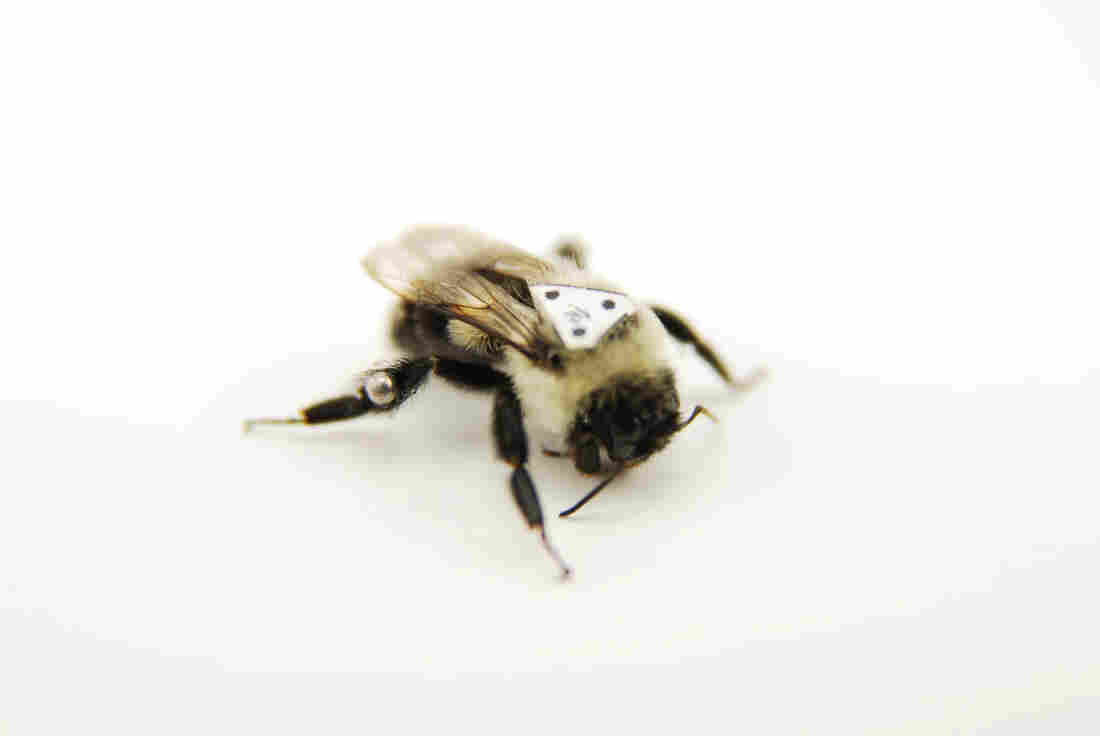 Ready, set, fly! The ball bearings glued to this bumblebee's legs simulate the weight and placement of pollen loads. The tag on the insect's back is a lightweight sensor, designed to track its movements in flight. Courtesy of Andrew Mountcastle hide caption 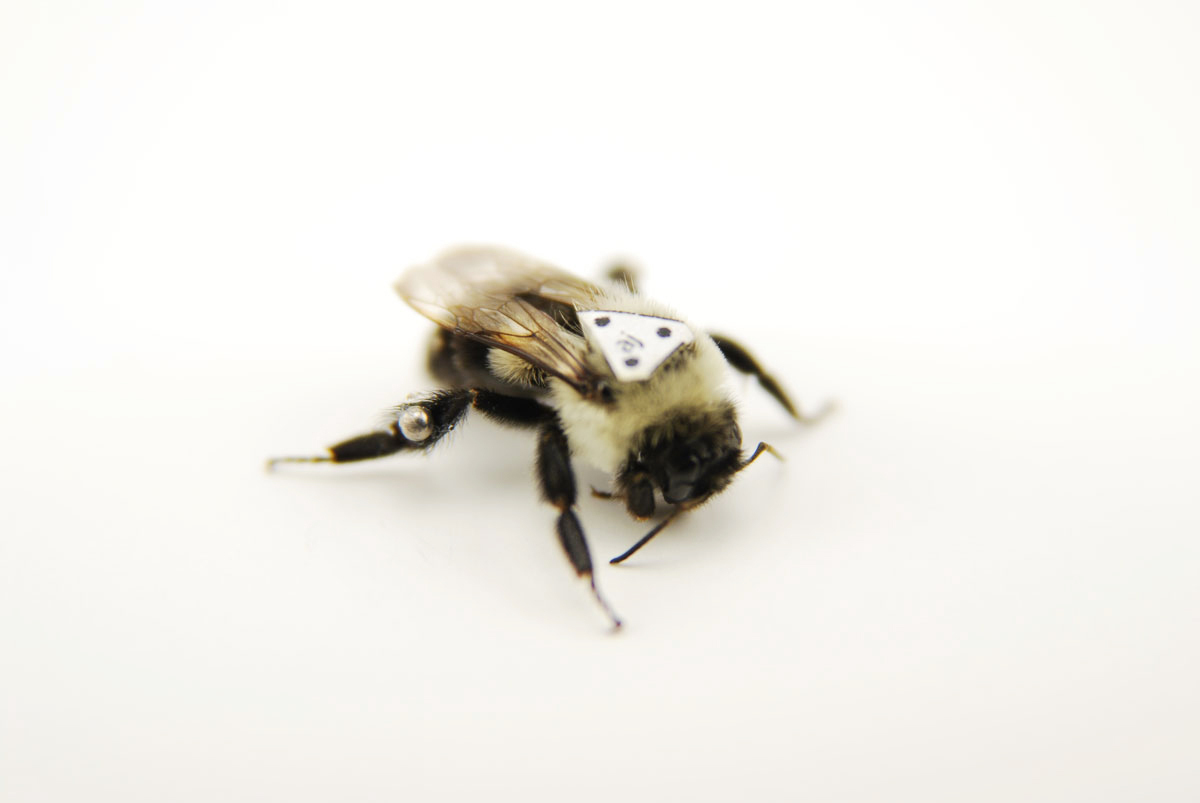 Ready, set, fly! The ball bearings glued to this bumblebee's legs simulate the weight and placement of pollen loads. The tag on the insect's back is a lightweight sensor, designed to track its movements in flight.

Bumblebees are important pollinators of crops and wildflowers across the U.S., and they gather heavy loads of nectar and pollen from flowers. A study published Monday shows that the type of food they carry affects how they fly.

That's because they store nectar in a special pouch inside their abdomen, while pollen gets packed into little hollows in their hind legs. When bumblebees carry a pollen load rather than a nectar load, "they are more stable, but less maneuverable in flight," according to an online report in the Proceedings of the National Academy of Sciences.

Despite what you may have heard, bumblebees do not defy the laws of physics when they fly.

"Of course, bumblebees fly in a very different way than airplanes do," he notes. "They flap their wings, and their wings bend and twist as they flap them."

Bumblebees are very good at flying in all kinds of weather, says Mountcastle, and they do it while loaded down with cargo.

"What might be surprising to many people is just how much load they're able to carry," he says. "Bumblebees are basically aerial tankers." They can store enough nectar to roughly double their body weight; and they can carry nearly half their own weight in pollen.

Mountcastle and his colleagues wanted to understand how a bumblebee's flight is affected by what it's carrying. After all, they note, many insects carry substantial loads, but not too many studies have assessed how this affects their flight performance.

Scientists monitored this loaded-down bee's every flight adjustment inside a wind tunnel, as the insect tried to maintain a steady course toward the fake "flower" moving at the bottom of the screen.

So, first the scientists ordered a hive of bumblebees online. "It comes packaged in a nice box," says Mountcastle. "And it always excites the FedEx guy when he drops off a buzzing hive at your door."

They trained the bumblebees to fly through a wind tunnel by rewarding them with nectar from an artificial flower at the other end.

Next, to start the experiment, they weighed the bumblebees down. "We use artificial weights, in the form of really, really small steel ball bearings," says Mountcastle. They either glued them on the bees' legs — to simulate a pollen load — or on their abdomens, to simulate a load of nectar.

They sent the bees flying through the wind tunnel again, under various wind conditions, and filmed them with high-speed video.

When they analyzed the video, they found that the type of cargo did make a difference. In turbulent wind conditions, bees were more stable when they carried weight on their legs — as they do when gathering pollen.

"Conversely though, carrying a pollen load carries a downside when the goal is maneuverability," says Mountcastle. In calm air, bees with heavy legs were less nimble than bees with fully loaded bellies.

All of this leads to an interesting possibility: Maybe bumblebees consider the wind conditions when deciding whether to gather pollen or gather nectar.

"This is something which would be the next question we ought to tackle," says Sridhar Ravi, of the Royal Melbourne Institute of Technology in Australia, who also worked on this study.

After all, bumblebees are very clever. "They can solve problems," Ravi notes. "We have them go through obstacle courses, mazes — and they just come up trumps. You just have to wonder, 'Oh, my God, they're so smart!' You know?"

He says experiments are now in the works to see if the weather really does influence whether bumblebees bring home more pollen or nectar.