Accessibility links
Wanted: More Bulls With No Horns : The Salt Most U.S. dairy cows are born with horns, but most farms remove them. Animal welfare groups say dehorning is cruel. Instead, they want ranchers to breed more hornless cattle into their herds.

Wanted: More Bulls With No Horns

Wanted: More Bulls With No Horns 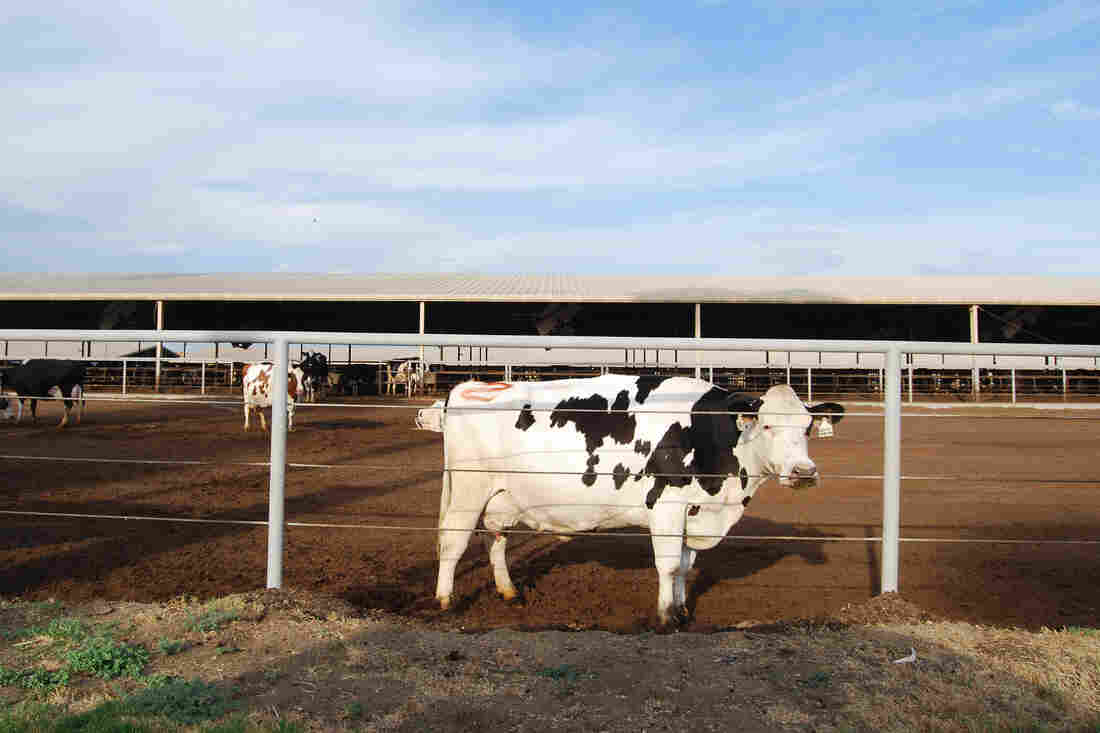 One of the hornless Holsteins at Steve Maddox's California dairy farm. Maddox is beginning to breed hornless cattle into his herd, but it's slow going. Abbie Fentress Swanson for NPR hide caption 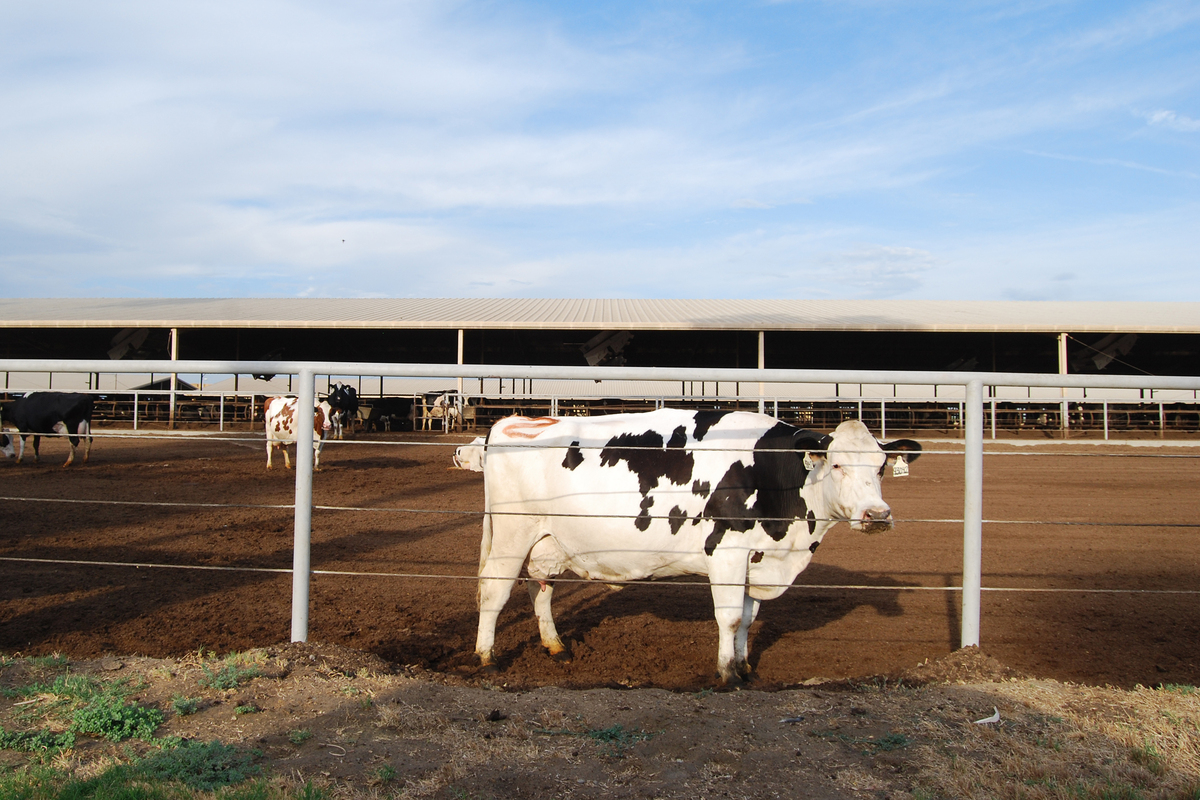 One of the hornless Holsteins at Steve Maddox's California dairy farm. Maddox is beginning to breed hornless cattle into his herd, but it's slow going.

The next time you're in the dairy aisle at the supermarket, take a moment to imagine the animals that produced all that milk. Do these cows have horns? Chances are they do, or at least they did at birth.

About 85 percent of milk sold in the United States comes from Holstein cows born with horns. But it's standard practice for farms to remove horns from cattle to prevent injuries to workers, veterinarians and other cows in the herd.

"Horned cattle: You get them on the truck, you get twice as many bruises when you get to the slaughterhouses. Bruises have to be cut out and thrown away," says Colorado State University professor and well-known animal advocate Temple Grandin. "In the dairy industry, removing horns improves safety for the stock people and the farmworkers."

But not everyone agrees with the practice of dehorning cattle. In recent years, animal welfare groups including The Humane Society and People for the Ethical Treatment of Animals (PETA) have called for an end to horn removal in cattle.

Their research shows it causes animals significant pain and stress, and that painkillers are rarely used during these procedures.

In the United States, there are no national rules regarding how farms should remove horns from cattle. Many farms follow the guidelines of the American Veterinary Medical Association and the National Milk Producers Federation, which recommend a practice called disbudding. Disbudding halts the growth of horn tissue in very young calves before pointy horns start to grow. Other dehorning techniques, like excising developing horns with metal scoops, are arguably harder on the cows and the workers.

Grandin is in favor of disbudding, as long as it's done quickly and with pain relief. "It's just like the dentist — you've got to wait for the drugs to take effect," she says.

But PETA and The Humane Society are pushing for a different approach. They want dairy farms to breed more hornless, or polled, animals into their herds. Thanks to advances in genomic selection and DNA testing, farmers can more easily find animals that carry naturally occurring hornless genes and breed the best of these animals with horned cattle. To be clear, this isn't genetic modification but breeding, since the polled gene occurs naturally in cattle.

"What's really exciting is that the polled gene is a dominant gene. Right away you get at least 50 percent of offspring born without the horn gene. Right off the bat, 50 percent of animals are spared from this cruel procedure," says PETA spokesman Dave Byer.

Until recently, selecting for the hornless gene hasn't been a top priority for the dairy industry, which is more interested in traits like superior milk production, cow health and fertility.

"In the past, there weren't very many polled bulls for farmers to choose from, so the ability to find one with good genetics for milk production and all the other traits was low," says Virginia Tech genetics professor Ben Dorshorst. That's changed now: "It is easier to find a good one, and that gets even more farmers interested in using polled genetics," he says.

Dorshorst recently conducted an analysis that revealed there are now twice as many polled dairy bulls for farmers to buy semen from than there were two years ago.

Aurora Organic Dairy, which milks 19,000 cows in Colorado and Texas, began using polled genetics in its herd more than three years ago. Now nearly 70 percent of the farm's newborn calves are hornless.

"The main reason that we do a lot of these things at Aurora is because cow care, animal wellbeing, is our no. 1 priority. And we share what we're doing with our customers, and they love it," says Aurora's vice president, Juan Velez. 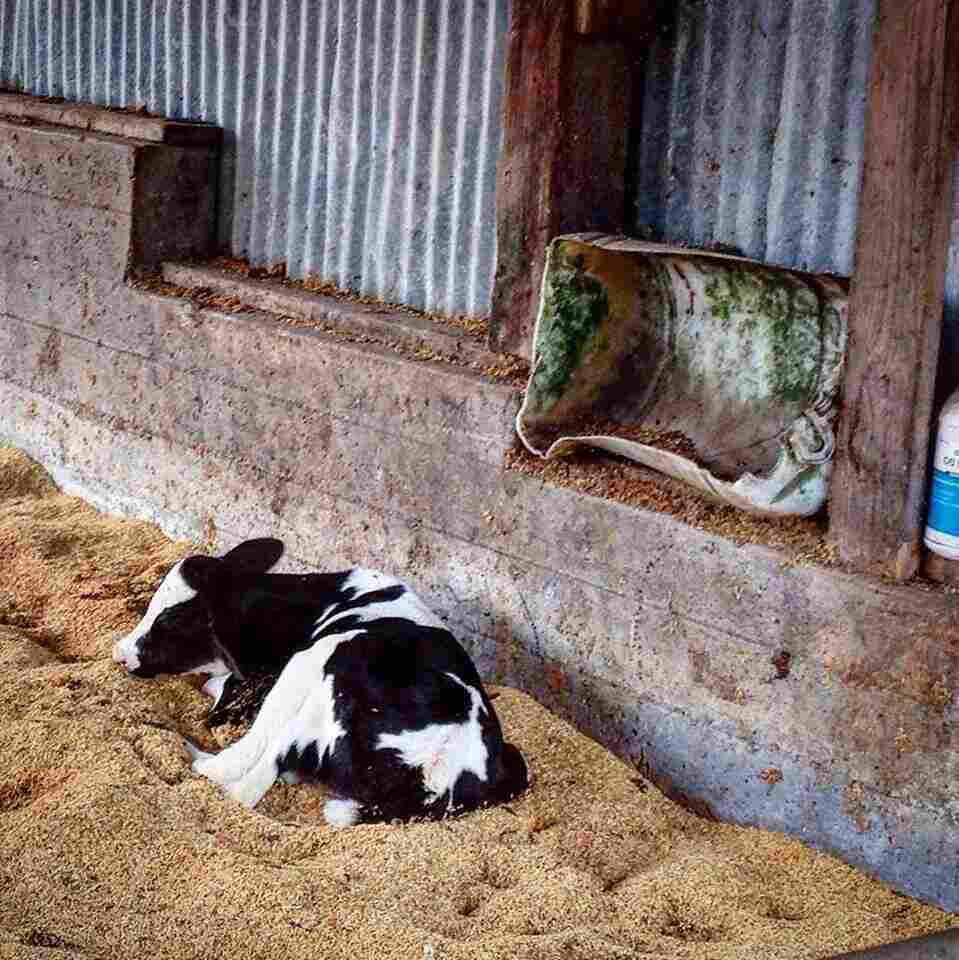 Most of the milk sold in the US comes from Holstein dairy cows that are born with horns. To protect animals and workers, it's standard practice for farms to remove horns from calves soon after they're born. Abbie Fentress Swanson for NPR hide caption 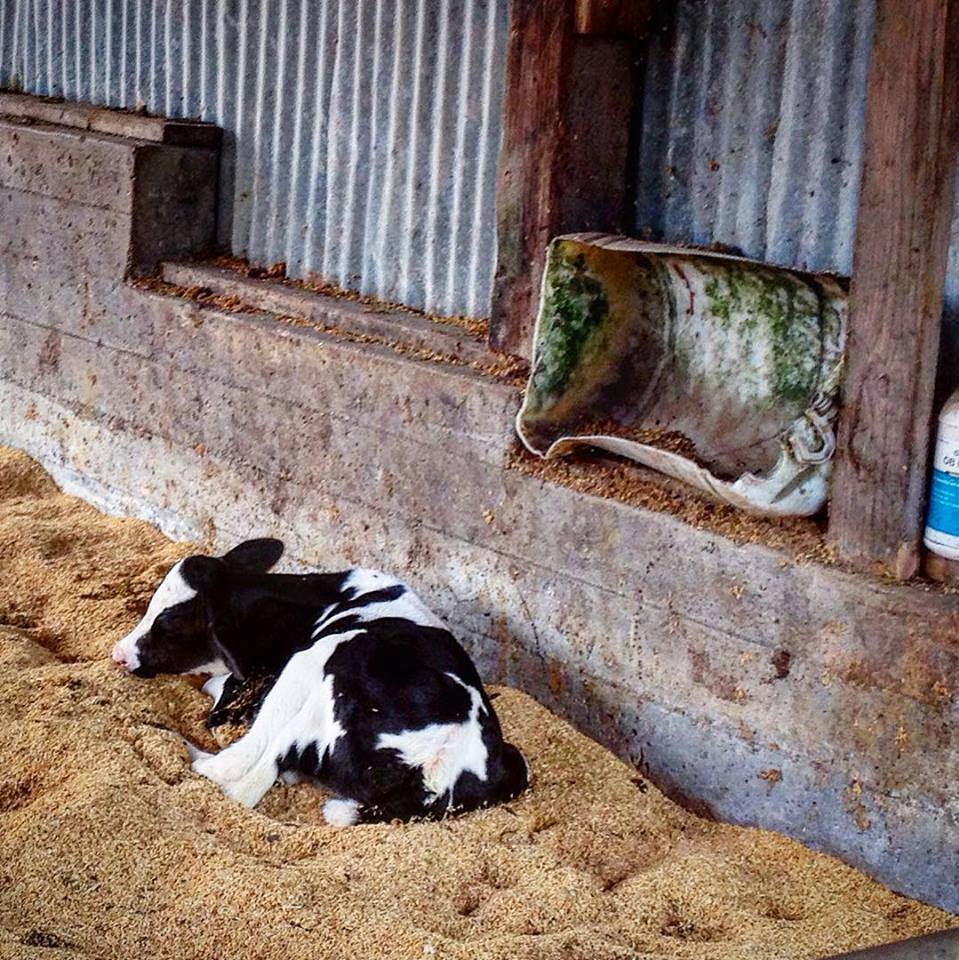 Most of the milk sold in the US comes from Holstein dairy cows that are born with horns. To protect animals and workers, it's standard practice for farms to remove horns from calves soon after they're born.

Responding to calls from PETA, the Humane Society and concerned customers, many food manufacturers, retailers and restaurants are asking their suppliers to integrate more polled cattle into their herds. In July, the nation's largest supermarket, Kroger, became the latest retailer to get on board. Other companies with animal welfare policies that address dehorning and polled genetics in the supply chain include Starbucks, Sodexo, Dannon, Aramark, Nestlé, General Mills, Chipotle, Dunkin' Brands and Wal-Mart.

But these companies aren't requiring suppliers to act, and farms aren't exactly chomping at the bit to make their herds 100 percent polled. Fair Oaks Farms milks 15,000 cows in Indiana and is one of Kroger's largest milk suppliers.

"As soon as bulls start catching up, you'll see dairy producers across the country using polled breeding, because we all would like to eliminate the process of dehorning," he says.

There's also the question of cost. A recent study from Purdue University and the U.S. Department of Agriculture found adopting polled genetics and phasing out dehorning may save farmers money in labor and veterinary costs. But polled genetics could also cost farmers lost profits if their hornless cattle produce less milk. Farmers may also have to pay a premium for hornless bull semen – a concern that keeps many farmers from making the jump to polled bulls, says Mark Kerndt, an analyst with the cattle reproduction company Select Sires.

Even if all of America's dairy farms adopt polled genetics, it will be a while before all the milk we buy comes from cows born without horns. Since polled genes in Holsteins occur at a relatively low frequency, farmers and breeders fear inbreeding if they move too quickly.

Steve Maddox, who has 3,200 milking cows on his California dairy, is working hard to identify genetically polled animals in his herd. But he says it's slow going.