Accessibility links
New Jersey Born And Bred: How The Wild Blueberry Was Tamed : The Salt In the past 10 years, the global blueberry crop has tripled. Yet the big, round commercial blueberry is a fairly recent innovation. It was created by breeders exactly 100 years ago, in New Jersey. 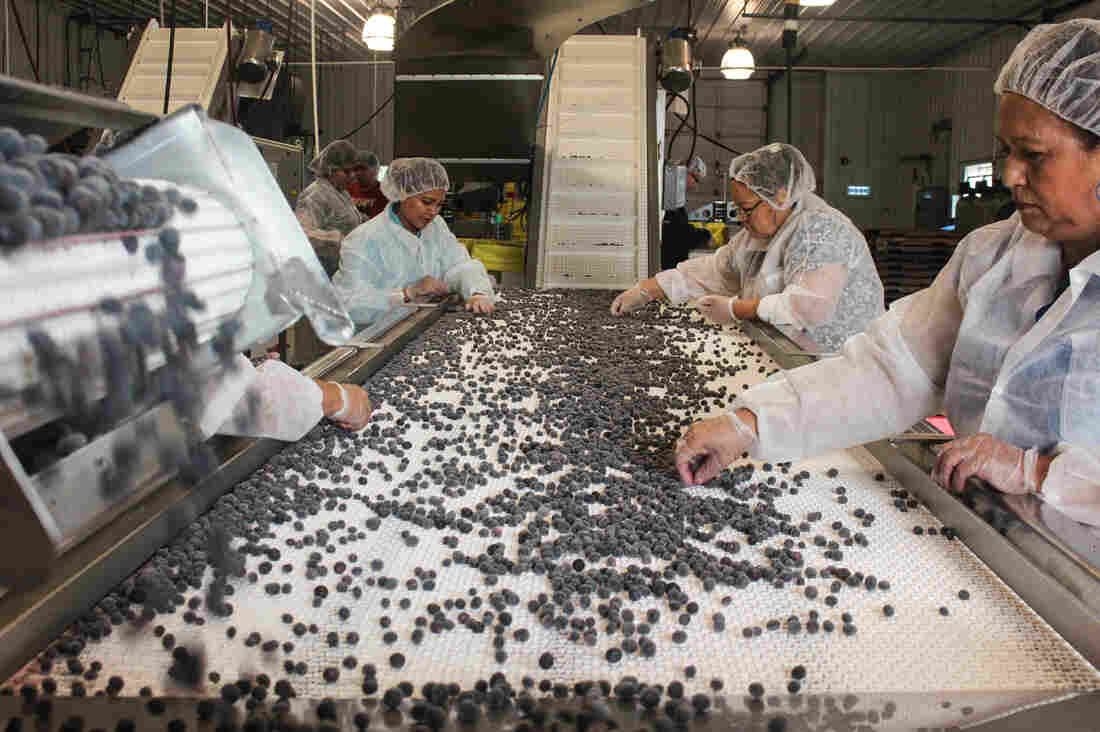 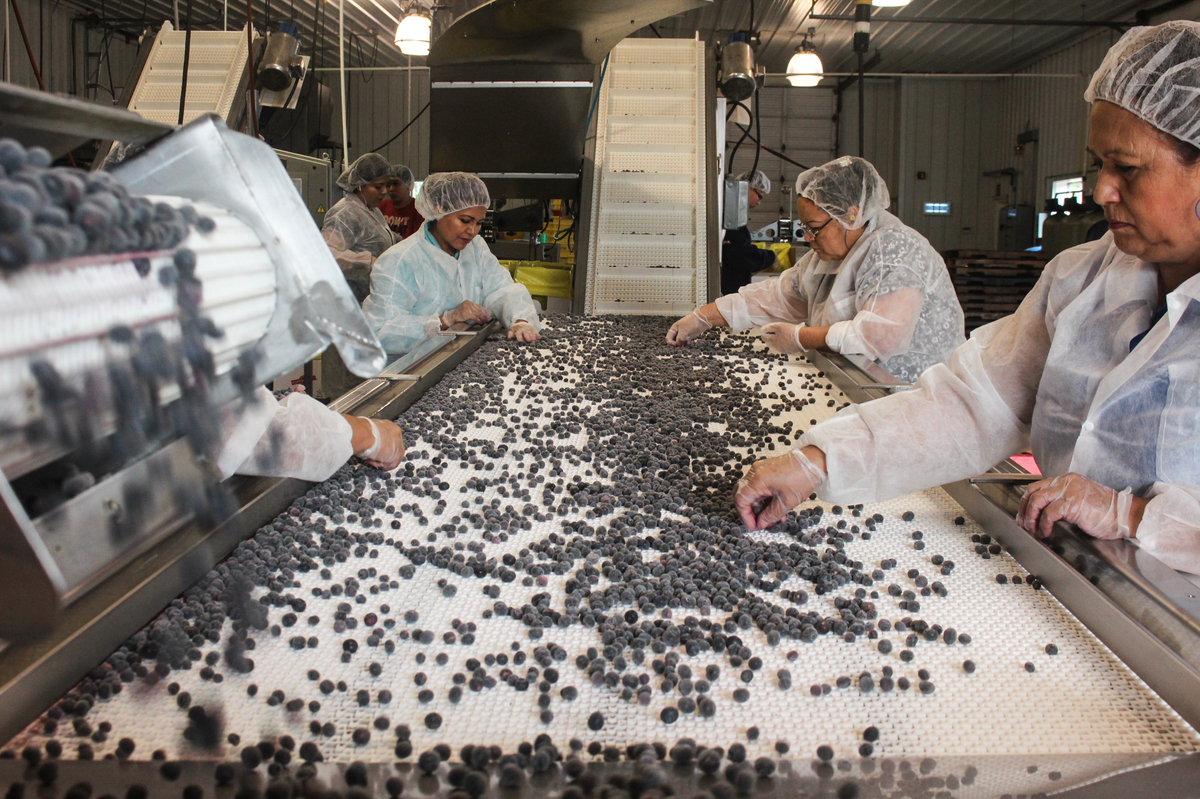 Final inspection of frozen blueberries at the Atlantic Blueberry Co.

Nearly every plant that we now depend on for food — from wheat to beans to tomatoes — comes from ancestors that once grew wild on hills and in forests.

In most cases, we don't know who, exactly, tamed those plants. We don't know which inventive farmer, thousands of years ago, first selected seeds and planted them for food.

The blueberry, though, is different. We know exactly who brought it in from the wild, and where.

It happened in the pine barrens of New Jersey.

This land is called barren for a reason. "It's sandy soils, acidic soils, tough conditions," says Mark Ehlenfeldt, a blueberry breeder with the Agricultural Research Service of the U.S. Department of Agriculture. "It's not suitable for most agriculture, short of cranberries and blueberries."

Ehlenfeldt and I are standing in a tiny, historic settlement called Whitesbog. It's a kind of time capsule from a century ago. There are dirt paths and a few old buildings, their sides made of plain, weathered, wooden shingles. 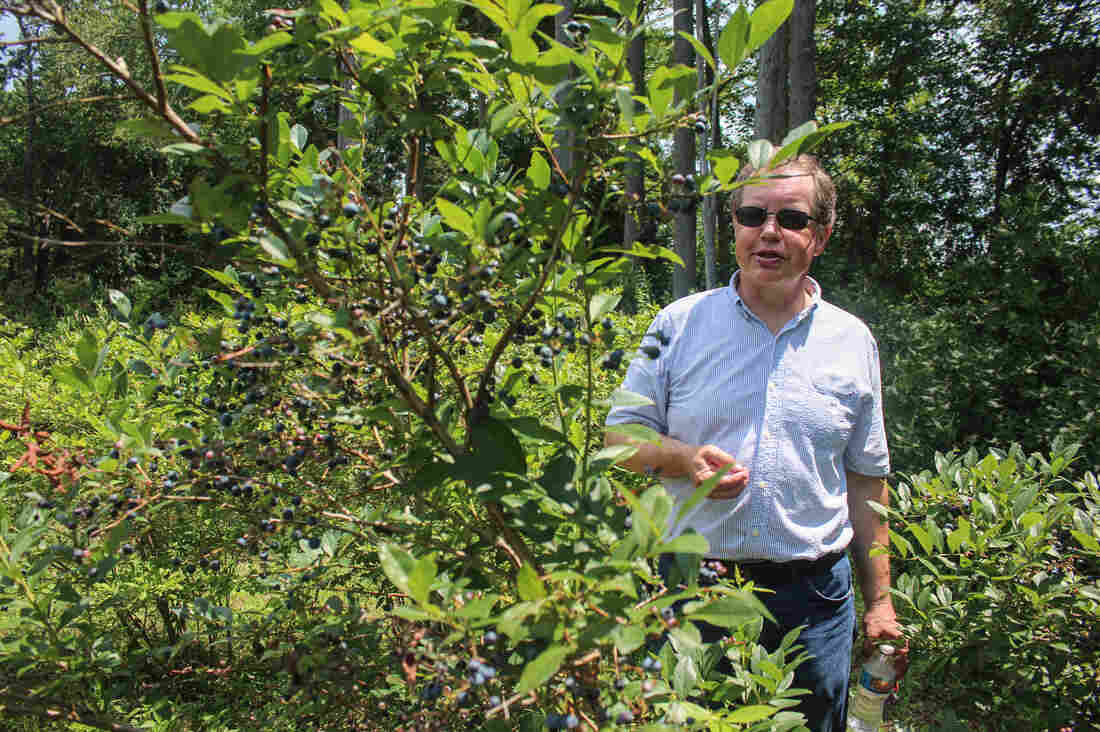 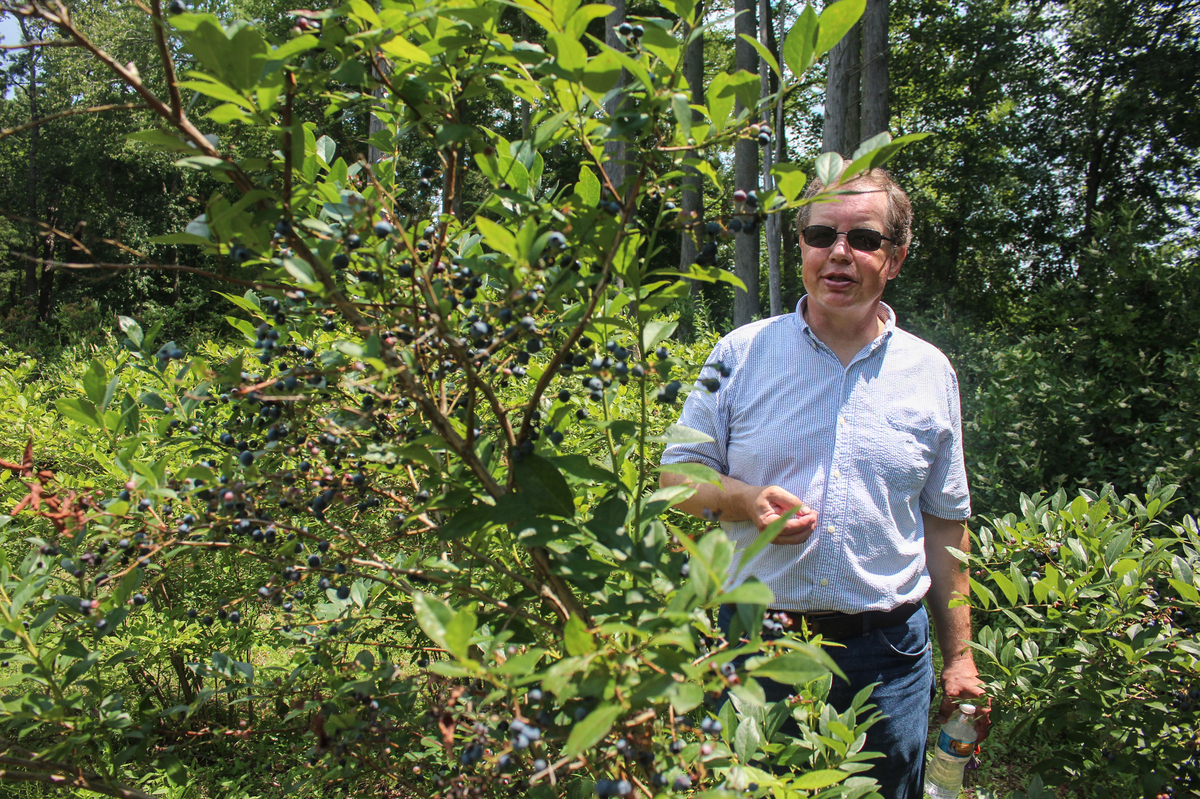 Mark Ehlenfeldt, a USDA blueberry breeder, in a century-old planting of Rubel blueberries in Whitesbog.

When these buildings were erected, the White family owned this land. They were Quakers. Joseph White was a big landowner. He grew cranberries. His oldest daughter was named Elizabeth.

"I always describe her as the son he never had. When he rode around with his superintendent, she was the one who rode with them on the wagon. She was very interested in the farm work," Ehlenfeldt says.

She was also alert to new possibilities for this farm. In 1910, when she was 39 years old, she came across a report about blueberries from the U.S. Department of Agriculture, from a botanist named Frederick Coville. 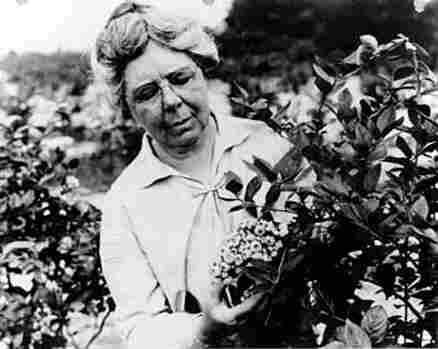 Coville had been investigating the wild blueberries that grew near his family's vacation home in New Hampshire. He'd figured out, for instance, why wild blueberries usually didn't prosper when people tried to grow them at home, in gardens. Blueberries, he reported, need acidic soils — very different from most food crops.

The report suggested that farmers might be able to use this knowledge to grow blueberries as a crop. And it got Elizabeth White's attention. She sat down and wrote a letter to Coville's boss at the USDA. She made sure to keep a carbon copy of this letter; she kept it in a fireproof safe for years afterward.

Elizabeth White offered to pay the USDA to carry out additional blueberry experiments on her family's farm. She wrote that this land would be "admirably suited to blueberries, judging by the way the wild ones flourish" in the pine forests nearby. These were tall, "high-bush" blueberries.

Within months, Frederick Coville, the botanist, came to Whitesbog to start the work. Elizabeth White sent word to local people who knew the forests that she would pay generously for any bushes with especially large berries. 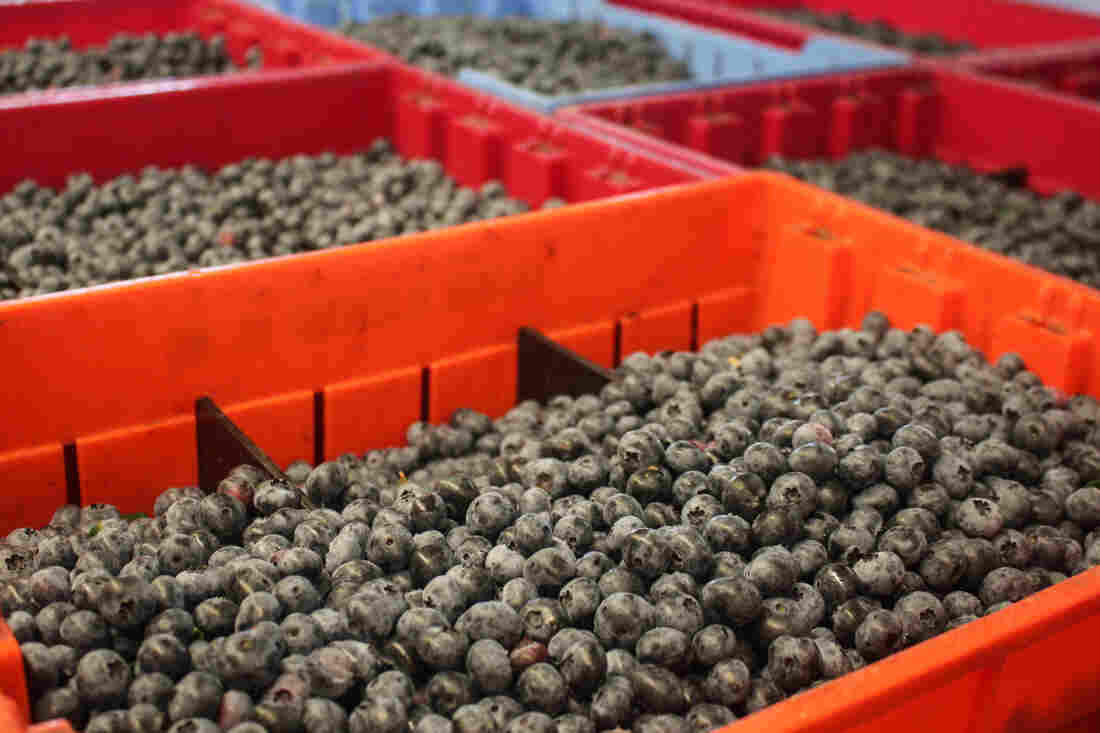 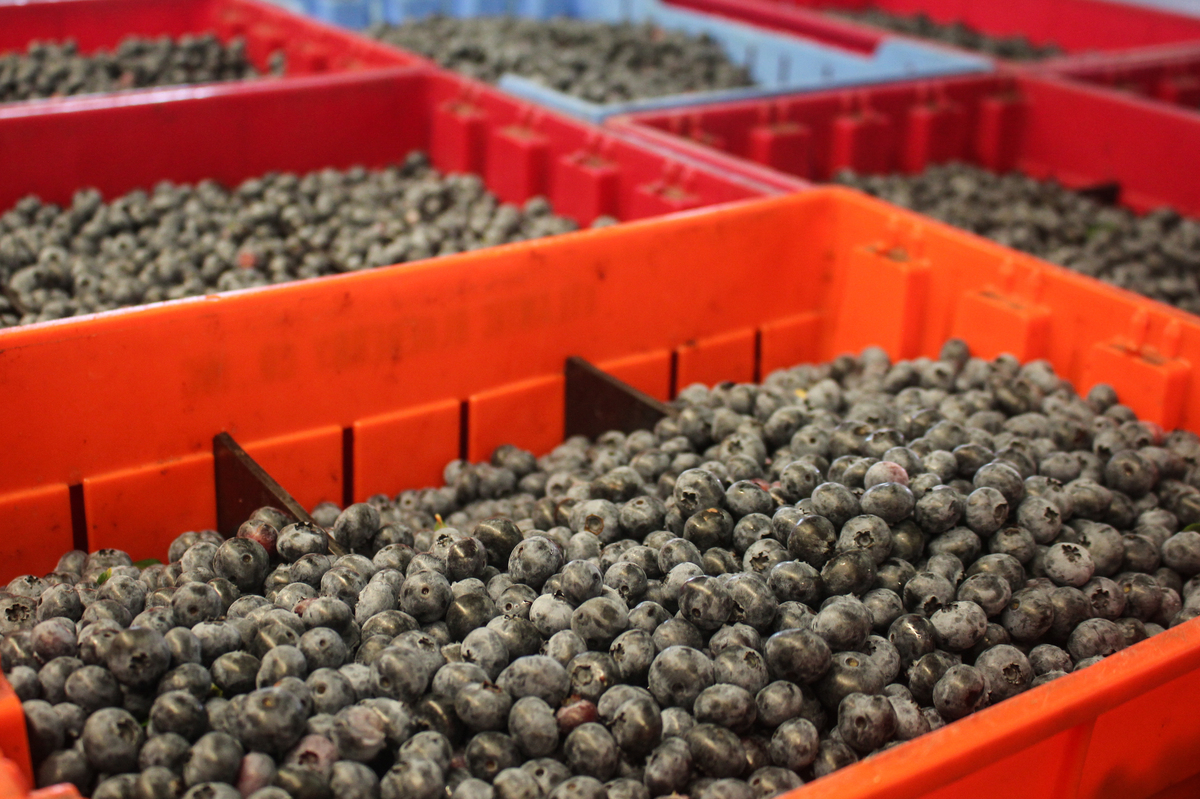 The pine people, as they were known, located 100 promising blueberry bushes.
White named each one for the person who found it: Harding, Hanes, Rubel. (Rubel was actually found by a man named Rube Leek. White didn't think she should use Leek as a blueberry name, and "Rube" didn't seem polite, so they settled on "Rubel.")

Coville figured out how to take cuttings from these bushes and grow new ones. These were clones of the original. "You could take that single bush and make 100 bushes. You could make 1,000 bushes. 10,000 bushes. And they would all be uniform," says Ehlenfeldt.

A few of those bushes were great berry producers. In fact, some of them still are growing here in a field at Whitesbog, right where they were planted 100 years ago, and they're still putting out berries.

But Coville also used these native bushes to start breeding. He cross-pollinated them, collected the seeds and grew them, selecting new bushes from among the offspring that produced the biggest and best crop of berries.

Elizabeth White described this work, years later, as a "joyous memory." She wrote that "encouraging developments came thick and fast. Dr. Coville and I gloated over them together, the enthusiasm of each fanning to brighter flame that of the other."

In 1916, they had a totally different kind of blueberry harvest to sell: large berries that all looked and tasted the same.

The blueberry had been tamed. A new business was born.

And in recent years, it's turned into a global phenomenon. 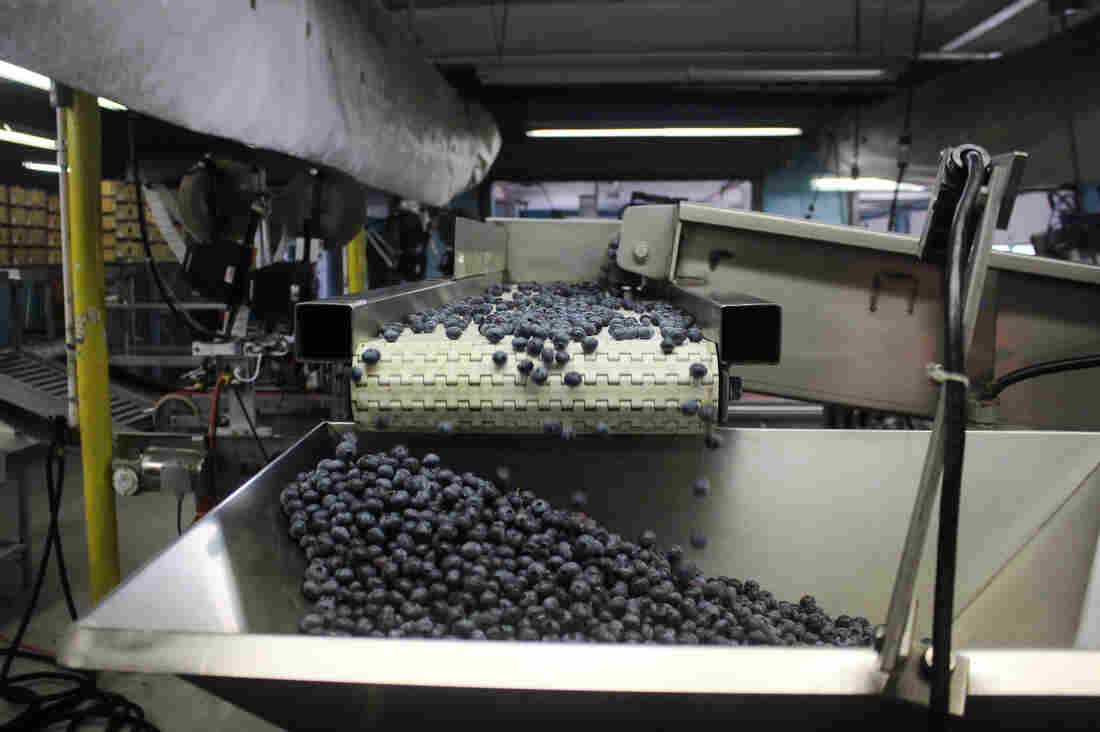 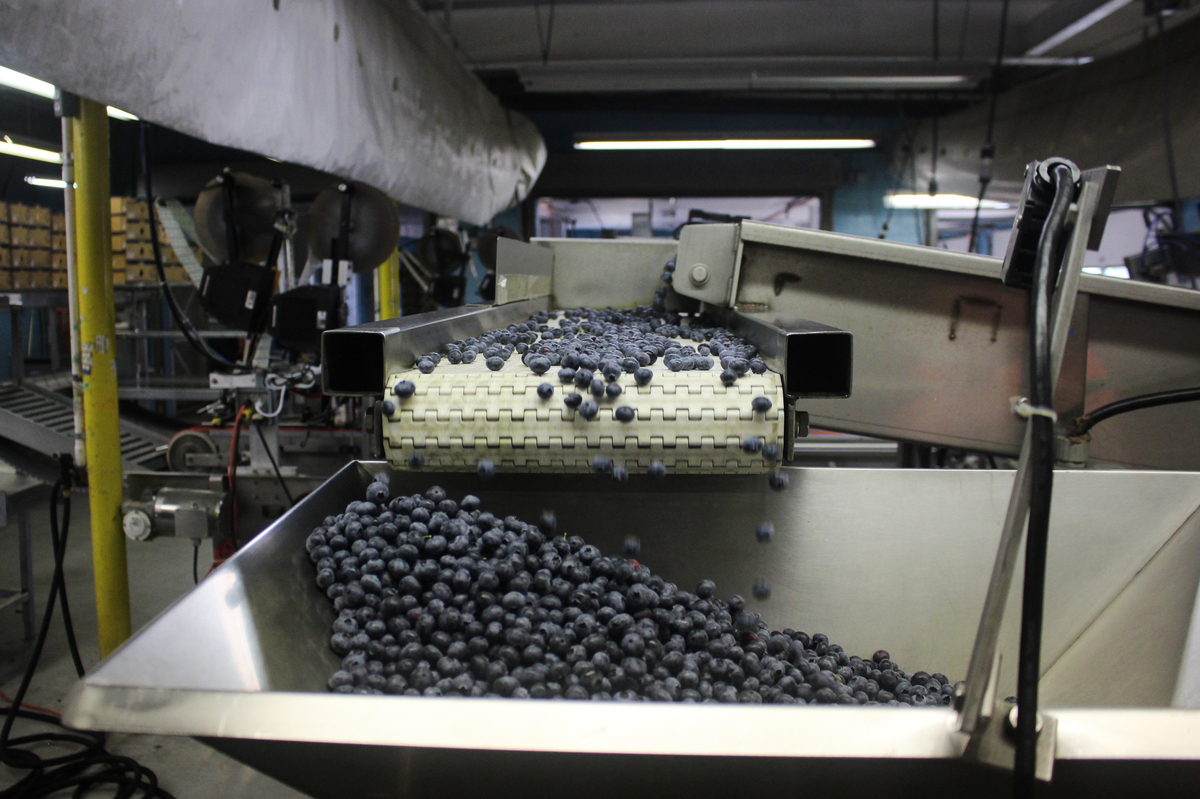 Part of the fresh blueberry packing line at the Atlantic Blueberry Co.

I got a small taste of that growth at the Atlantic Blueberry Co. of Hammonton, N.J., a town that calls itself the Blueberry Capital Of the World. The Galleta family started this business with four acres of blueberries in 1936. Today, the company is still family owned, but its fields cover more than 1,000 acres.

Thousands of tons of blueberries flow through the packing house here during the two-month harvest. A river of blue flows underneath a video camera, which can detect any berries that aren't quite blue enough. A computer instantly activates air jets that blow the not-quite-ripe berry out of the stream.

"If it's red or green, it's coming out!" shouts Denny Doyle, the company's general manager, over the din of equipment.

Some berries go into boxes and straight off to the supermarket. Others go into a supercharged cooler, where it's 15 degrees below zero.

"Within 30 to 60 seconds, it'll start freezing the berries," says Doyle. "I'm running 80-mile-an-hour winds in there. It's very turbulent in there."

Even though Atlantic Blueberry's production has grown, demand for blueberries has grown even faster.

A few decades ago, plant breeders in Florida created new kinds of high-bush blueberries that could grow in warmer climates. Blueberry production spread from its traditional sites in New Jersey and Michigan to Florida, Georgia, California and Oregon.

Jim Hancock, a blueberry breeder at Michigan State University, watched this growth in amazement. "I couldn't believe that this could be sustained," he says. "And it's never diminished."

North American consumers can now get fresh blueberries in winter. They grow in Chile and Peru. Europeans are now growing high-bush blueberries.

Just in the past 10 years, global blueberry production has tripled. "It's become a world crop. It's huge!" says Hancock.

And no matter where they grow, these high-bush blueberries trace at least part of their ancestry to Whitesbog, and the enthusiasm of Elizabeth White and Frederick Coville.