Accessibility links
How Percy Shelley Stirred His Politics Into His Teacup : The Salt In 19th century Britain, keeping sugar out of tea became a political statement against slavery. The sugar boycott was no easy choice for the radical poet, who hated slavery but loved tea.

How Percy Shelley Stirred His Politics Into His Teacup

How Percy Shelley Stirred His Politics Into His Teacup 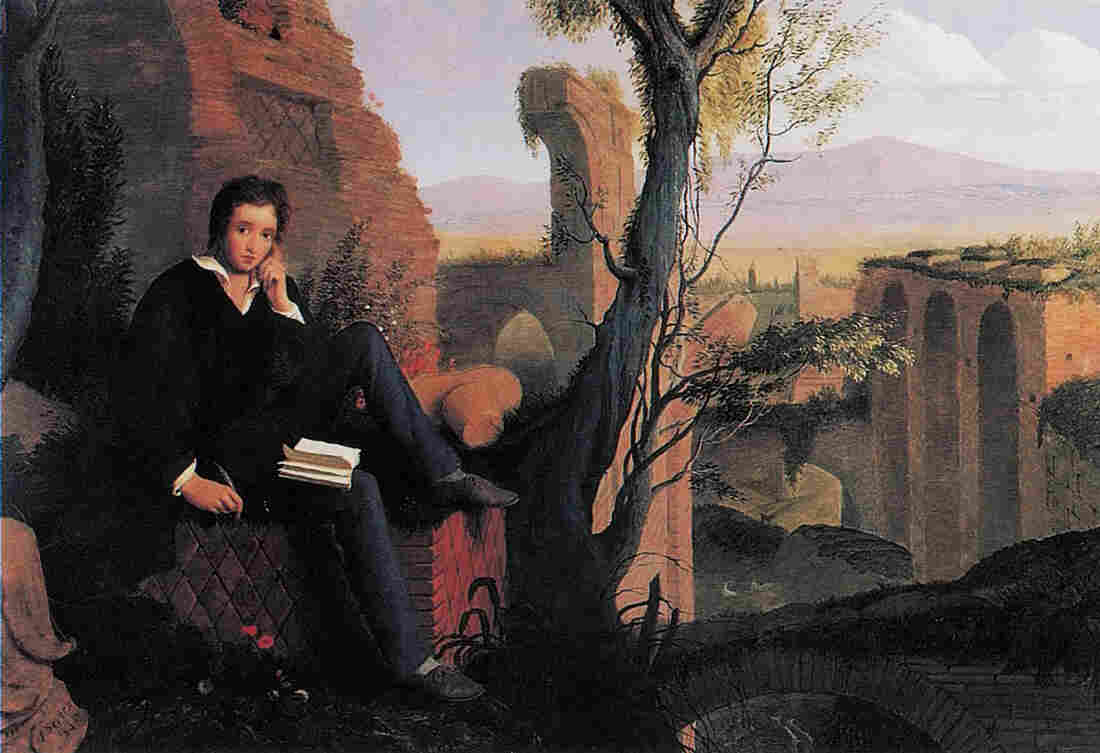 Joseph Severn's portrait of Percy Bysshe Shelley. The radical 19th century poet practiced the politics of the plate. For Shelley and other liberals of his day, keeping sugar out of tea was a political statement against slavery. Joseph Severn/Wikimedia hide caption 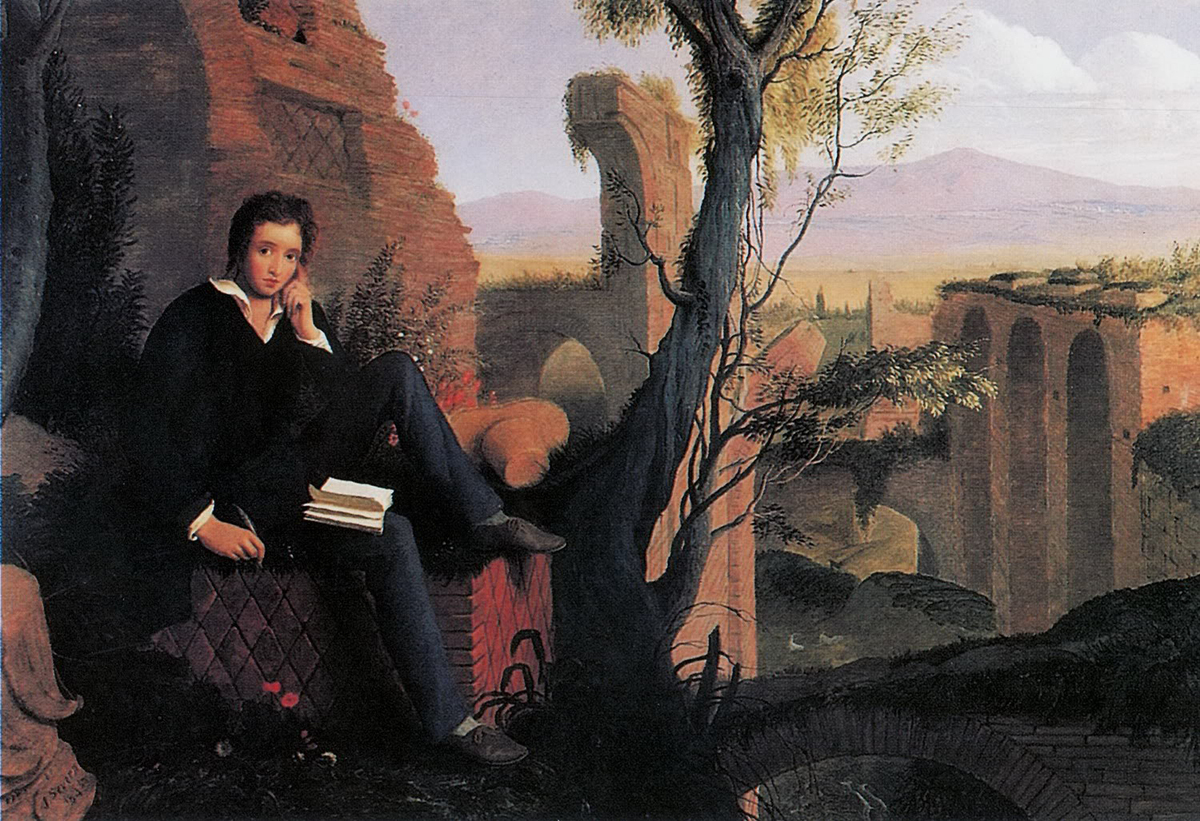 Joseph Severn's portrait of Percy Bysshe Shelley. The radical 19th century poet practiced the politics of the plate. For Shelley and other liberals of his day, keeping sugar out of tea was a political statement against slavery.

Born 223 years ago on Aug. 4, the great Romantic poet Percy Bysshe Shelley is celebrated for such works as his sublime odes to the skylark and West Wind. But he was also a radical thinker — and his revolutionary politics stormed in his teacup.

Slender of build and Spartan in habit, the tall, fair-haired poet had no taste for rich foods or wine. A vegetarian who shuddered at animal slaughter — though there were lapses into muttonchops and bacon — Shelley was an indifferent eater. He would absently spoon congealed food down his throat while his bright blue eyes devoured Aeschylus or Plutarch, whose essays on vegetarianism he translated.

But the one beverage to which he was addicted was tea.

His appetite for tea was limitless. Presumably, Shelley would have loved to load his cup with sugar — he had a strong sweet tooth. Except that in his lifetime, sugar came to epitomize the evils of slavery. In the liberal circles Shelley moved in, eating sugar was about as acceptable as displaying tusks of ivory in one's living room is today.

In 1791, the year before Shelley was born, the abolitionist William Fox published his anti-sugar pamphlet, which called for a boycott of sugar grown by slaves working in inhuman conditions in the British-governed West Indies. "In every pound of sugar used, we may be considered as consuming two ounces of human flesh," wrote Fox. So powerful was his appeal that close to 400,000 Britons gave up sugar. 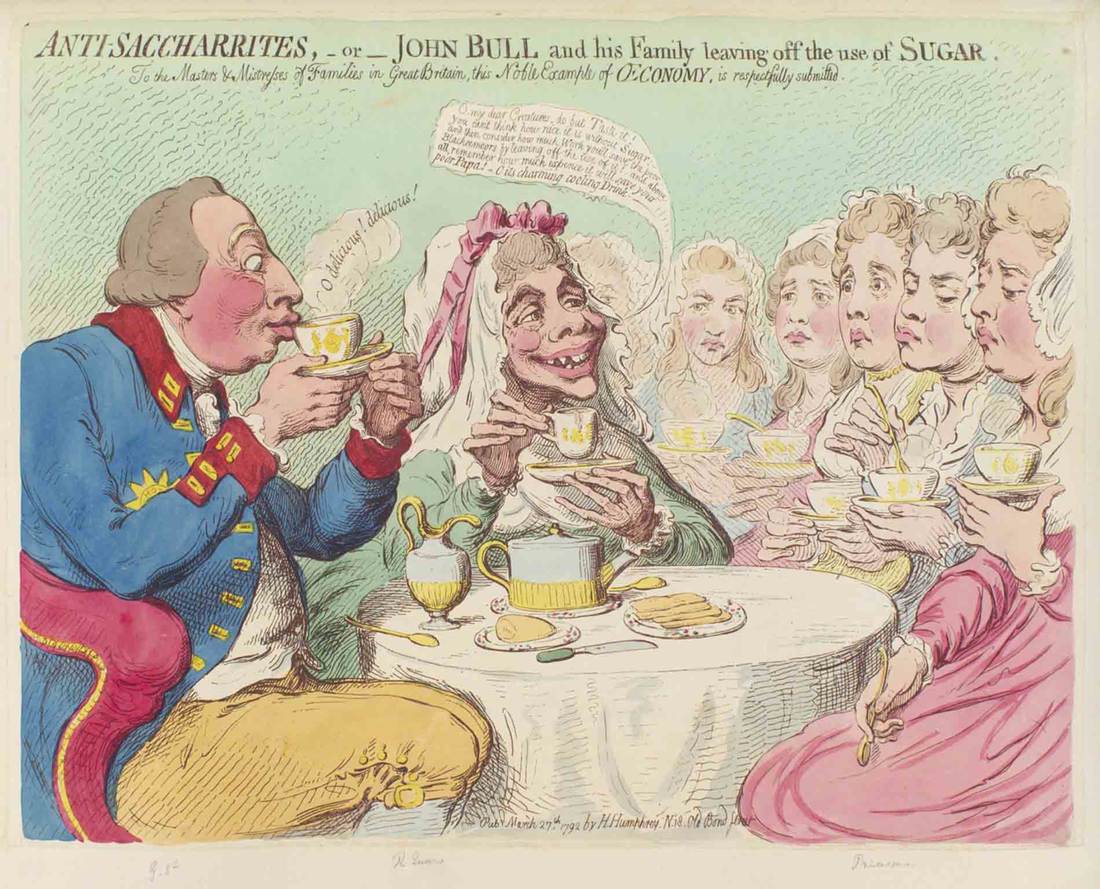 Anti-Saccharrites, a caricature by James Gillray from 1792, depicts King George III of England and his wife, Charlotte, drinking tea without sugar and urging their daughters to do the same. At one point, close to 400,000 Britons gave up sugar as part of the anti-slavery boycott. James Gillray/Wikimedia hide caption 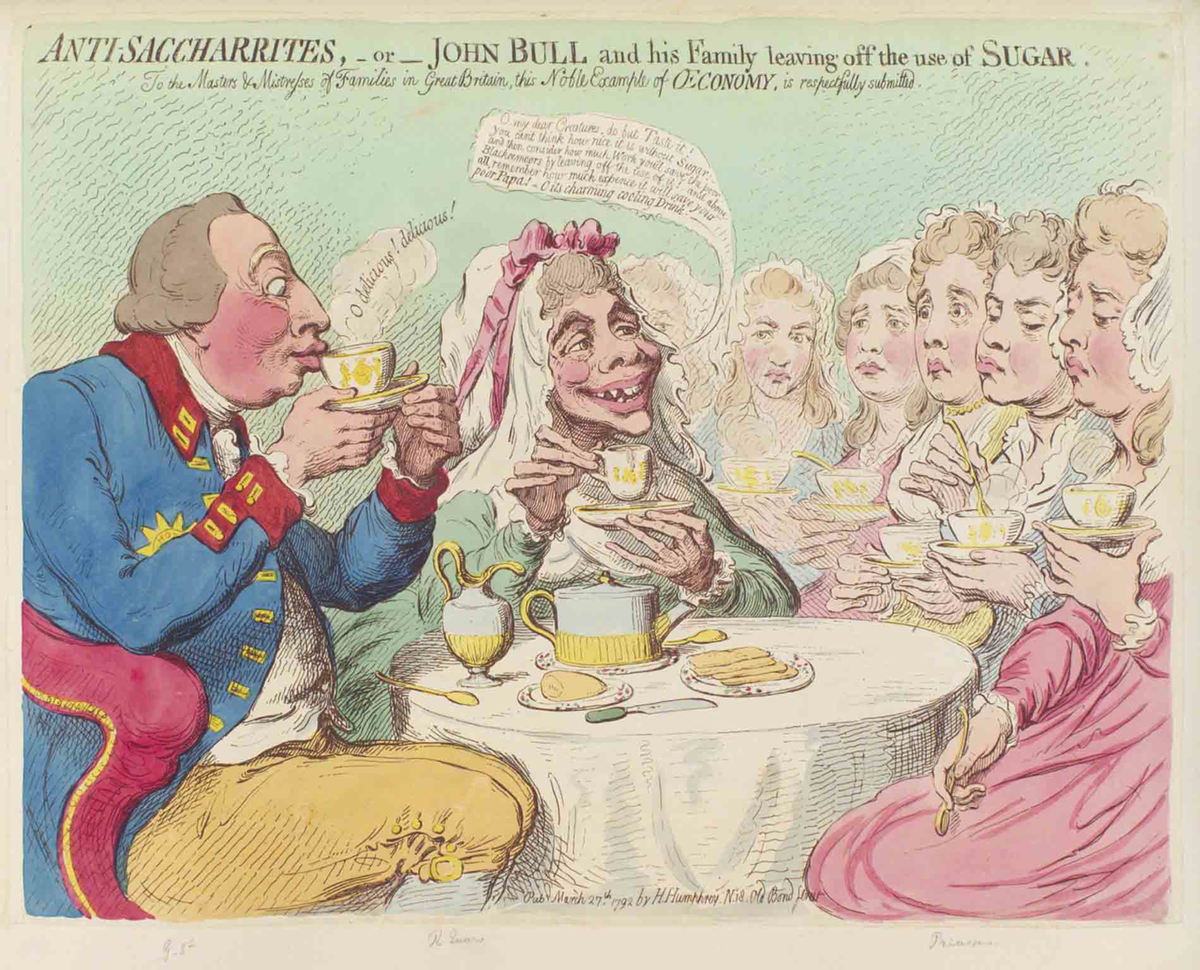 Anti-Saccharrites, a caricature by James Gillray from 1792, depicts King George III of England and his wife, Charlotte, drinking tea without sugar and urging their daughters to do the same. At one point, close to 400,000 Britons gave up sugar as part of the anti-slavery boycott.

The sugar boycott squarely affected that most beloved of English rituals: afternoon tea. As The Salt has reported, sugar was an integral reason why tea became an engrained habit of the British in the 1700s. But with the sugar boycott, offering or not offering sugar with tea became a highly political act.

Soon, grocers stopped selling West Indies sugar and began to sell "East Indies sugar" from India. Those who bought this sugar were careful to broadcast their virtue by serving it in bowls imprinted with the words "not made by slave labor," in much the same way that coffee today is advertised as fair-trade, or eggs as free-range.

Leading the boycott were the Romantic poets Coleridge and Shelley's early hero, Robert Southey, who described tea as a "blood-sweeten'd beverage" produced under the "mangling scourge" of the trader's whip. Shelley used these very words in his first long poem, Queen Mab, to evoke plantation slaves toiling "to the sound of the flesh-mangling scourge" to produce "all-polluting luxury and wealth."

Both Shelley and his second wife, Mary, abstained from sugar and drank green tea instead. According to Mary Shelley's biographer Miranda Seymour, the lonely and misunderstood monster in Mary's 1818 masterpiece, Frankenstein, is based on the African slaves she saw being worked at the quays in Bristol, a major slave port at the time. Mary's father, William Godwin — a radical socialist philosopher at the forefront of the antislavery movement, and Shelley's mentor — enjoyed a strong smoky green tea known as Gunpowder.

Still, even Shelley's high-minded avoidance of sugar had its limits. This, after all, was a man who liked to lick honey straight from the honeycomb. As his friend, Thomas Jefferson Hogg, wrote, Shelley "would greedily eat cakes, gingerbread, and sugar." And at Oxford, at least, Shelley took his tea with sugar.

For the most part, though, the poet seems to have maneuvered around the need for the sweet stuff in his cup by drinking only the best, most expensive green tea. Though barely a step ahead of the debt collector, he insisted on having the finest tea shipped to Italy when he and Mary moved there for the last four years of his life. It was, Mary explained, a necessity, as "Townley tea" — a common brand — "was tried and found wanting."

What else would one expect of Shelley? He was, after all, born an aristocrat. His radical politics caused his estrangement from his wealthy family, but they did not strip him of his taste for good tea. Indeed, the man who got kicked out of Oxford for writing a pamphlet on "The Necessity of Atheism" liked to joke that he was actually a "théist" — by which he meant, a devotee of tea.

That devotion never wavered. Though doctors of the age cautioned against excessive drinking of stimulants like tea and coffee, Shelley — in his usual rebel manner — sneered at their counsel. A couple of years before his death, he wrote:

"The liquor doctors rail at—and which I
Will quaff in spite of them—and when we die
We'll toss up who died first of drinking tea,
And cry out,—'Heads or tails?' where'er we be."

Afternoon tea didn't kill Shelley — an afternoon storm did. A month before his 30th birthday, Shelley drowned off the coast of Italy.