Accessibility links
Protein Goes Green: Can Algae Become The Next Soy? : The Salt Some companies think microalgae could be the alternative protein of the future, but can it top plant proteins? 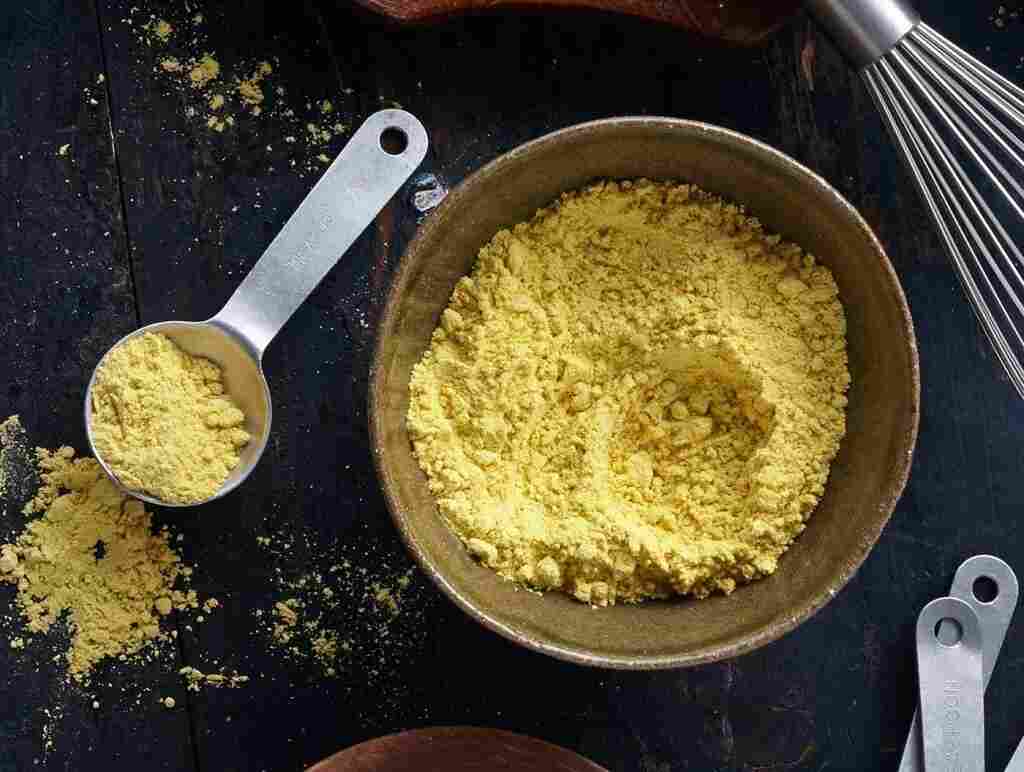 This microalgae powder is designed for use in cooking, baking and smoothies. Marketed under the name AlgaVia, the powder is starting to show up as an ingredient in grocery store items. Solazyme hide caption 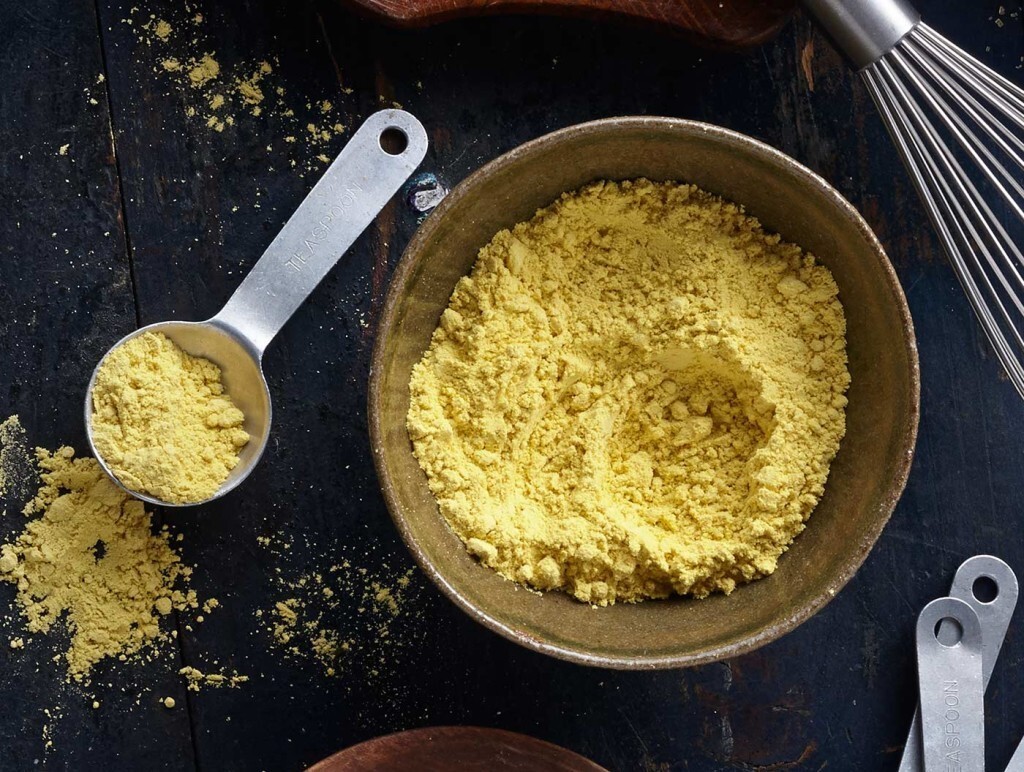 This microalgae powder is designed for use in cooking, baking and smoothies. Marketed under the name AlgaVia, the powder is starting to show up as an ingredient in grocery store items.

Could the next big thing in alternative proteins be a something tiny and green?

Several companies see a bright future for plant protein, and for microalgae in particular. But whether this attractive protein source can muscle out a place for itself against heavyweights like soy and pea is an open question. While soy has been the alternative protein of choice for years, up-and-coming companies like Hampton Creek are using pea protein to make a substitute for eggs and mayonnaise, and are attracting high-powered investors. Will microalgae companies be able to follow suit?

Demand for plant protein of all stripes is growing in concert with growing interest in the U.S. in reducing meat consumption. Lots of people, from vegans to flexitarians to Meatless Monday dabblers, are substituting vegetables for meat. And the national Dietary Guideline Advisory Committee concurs: Their 2015 recommendations emphasize a plant-based diet and suggest that Americans cut back on meat for health and environmental reasons.

Many are seeing a business opportunity in this shift.

"[Product] developers realize we need to broaden our protein horizons and are on the hunt for alternative protein sources," Camilla Stice, a food and nutrition research analyst at the tech strategy firm Lux Research Inc., tells The Salt via email.

Vegetable proteins are especially attractive, because consumers accept them more than other trendy protein alternatives, like insects. As The Salt has reported, even though it's getting easier to snack on bugs, entomophagy still seems pretty creepy to most Westerners.

Soy currently dominates the plant protein market, according to Stice. But it has lost some ground, due in part to consumer concerns about estrogen-mimicking compounds and GMOs. Other plant proteins — from pea, rice, bean, potato and quinoa — are making some inroads.

But the algae boosters say it has nutritional advantages that make it stand out. Microalgae is 50 to 60 percent protein, but unlike many soy protein products, where the protein has been isolated from the plant, microalgae is generally used as a whole-food ingredient and retains more than just protein. Nutrients vary by strain, but can include fat; fiber; vitamin A, B, C and E; and minerals.

"Algae" informally refers to a variety of organisms that are aquatic and photosynthetic but lack stems, roots and leaves. There are two broad categories of algae: macroalgae and microalgae. Macroalgae are seaweeds, like dulse and kelp. They're large and multicellular, and are also of interest as a food crop. Microalgae are single-celled organisms, and some species (there are thousands) might make good biofuel.

A handful of microalgae species, Spirulina or Chlorella in particular, also show promise as a natural superfood. Technically, Spirulina isn't even an algae; it's a kind of cyanobacteria, called blue-green algae. But both Spirulina and Chlorella have been used as dietary supplements and in food products like green smoothie drinks, and both are relatively easy to grow. For some companies trying to make microalgae catch on as an alternative protein source, Chlorella is the microalgae of choice.

Here in the U.S., there's some buzz around Solazyme, a San Francisco-based company best known for its work with plant-based fuels. Now it's also developing microalgae powder for use in cooking, baking and smoothies. The food products are being marketed under the name AlgaVia, and are beginning to be used as ingredients in grocery store items.

Mark Brooks, the senior vice president of Solazyme's food division, says he's excited about the prospect of bringing algal protein to the masses. "We are making new-to-the-world, game-changing protein," he says.

At Solazyme, a strain of Chlorella microalgae is grown in closed, stainless-steel fermentation tanks (as opposed to the open-pond system used in other production facilities) and then washed, dried, and milled into powder.

With fermentation, Brooks says, Solazyme can turn plant sugars into protein quickly. The short time required for a finished product is why he calls Solazyme's technology "revolutionary:" Instead of taking months to grow a crop, or years to raise an animal into adulthood, high-protein microalgae can be produced in a matter of days.

In Portugal, another company, called Allma, is offering microalgae food products. Allma produces a different strain of Chlorella algae that, unlike Solazyme's microalgae, requires light to grow inside a closed system called a photobioreactor. Sofia Mendonca, the business development manager at Allma, says that this method of growth allows a high level of control over algal growth.

Allma is offering several Chlorella products, Mendonca says, and consumer feedback has been positive. "Microalgae products are needed," she says, because "they represent a natural, high quality source of essential micronutrients." Mendonca thinks the future of microalgae is bright.

But that doesn't mean it's quite ready for prime time. "Microalgae cannot be yet considered a food commodity," Mendonca says. And, she says, there are some obstacles for her company and others to overcome before they can implement microalgae as a food ingredient.

Mario Tredici, a professor at the University of Florence who has spent several decades researching microalgae, says that for now, microalgae is still too costly to compete with other plant proteins. In 10 years, he predicts, the price may come down enough where it could compete with milk and eggs.

Stice agrees that cost is a problem. "The industry is looking for a low-cost, sustainable protein source," she says, "and developers have yet to prove algae is that source." Other concerns are also holding microalgae back, she says. Depending on the species of algae, the type of production system, and location, growing microalgae can use a lot of water and have high energy costs.

What needs to happen, Tredici says, is more research on growing microalgae at large scales. And if we can figure this puzzle out, cultivation of microalgae could have very large impacts. Growing microalgae saves soil, uses fertilizer with very high efficiency, and doesn't require pesticides. Water can be a problem, but closed systems of cultivation recirculate water to limit waste. Tredici's group is looking into cultivation of a marine microalgae as food, so that freshwater wouldn't be needed at all.

It may not be ready yet, but in the future, Tredici says, microalgae could compete with alternative protein sources like insects, with the added benefit of more vitamins and nutrients. "Protein is important," he says, "but algae are much more than protein."