Accessibility links
Dining Like Darwin: When Scientists Swallow Their Subjects : The Salt Some scientists carry on the tradition of eating the animals or plants they study: leeches, tadpoles, 30,000-year-old bison. Darwin did it first, but why do it at all? Call it all-consuming curiosity. 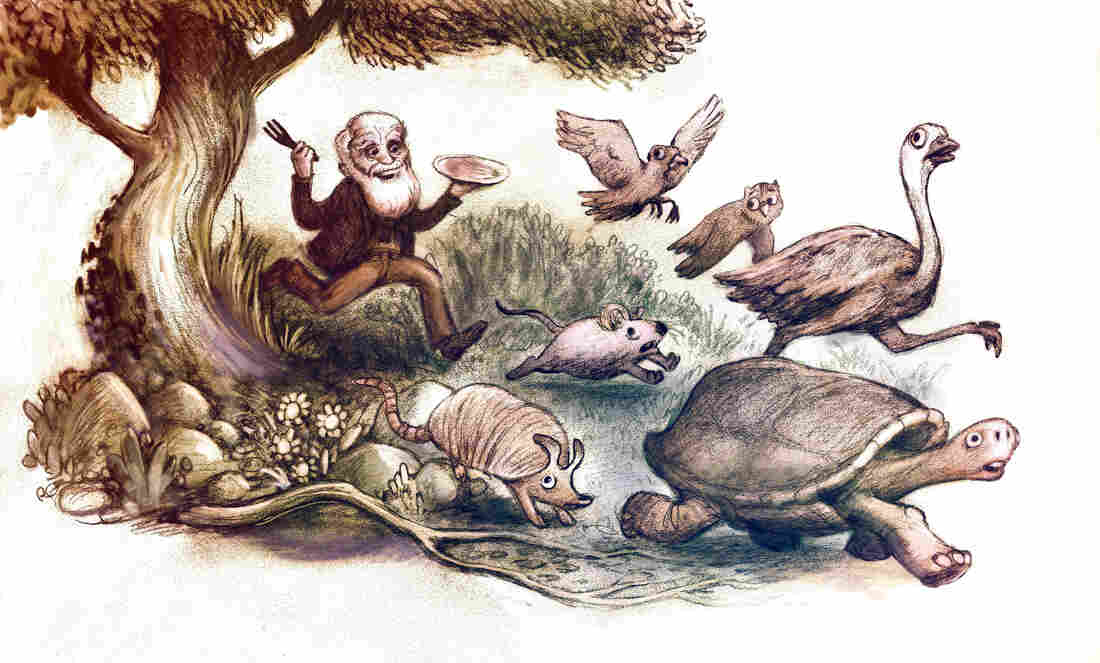 Scientists who eat the plants and animals they study are following in the tradition of Charles Darwin. During the voyage of The Beagle, he ate puma ("remarkably like veal in taste"), iguanas, giant tortoises, armadillos. He even accidentally ate part of a bird called a lesser rhea, after spending months trying to catch it so that he could describe the species. Benjamin Arthur for NPR hide caption 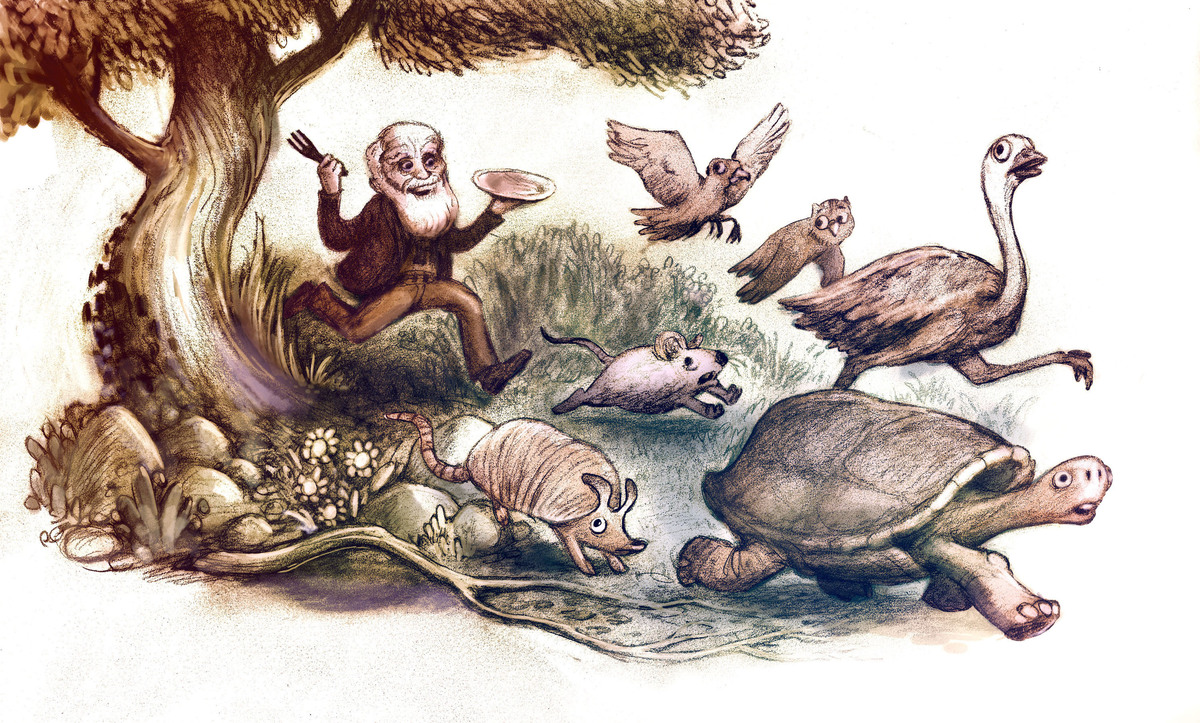 Scientists who eat the plants and animals they study are following in the tradition of Charles Darwin. During the voyage of The Beagle, he ate puma ("remarkably like veal in taste"), iguanas, giant tortoises, armadillos. He even accidentally ate part of a bird called a lesser rhea, after spending months trying to catch it so that he could describe the species.

Scientists are a driven bunch, dedicated and passionate about understanding the inner workings of the world. You must be focused, willing to work strange hours in every kind of weather. Willing to go beyond the known and be constantly inspired by your curiosity.

It takes guts to be a scientist. And a strong stomach doesn't hurt, either.

I was in a graduate ecology class when I first heard about the scientific tradition of eating the organism you study. Other students were swapping stories of friends who had chomped down on grubs and beetles, or illicitly slurped a tadpole. It was hilarious, disgusting and revealing. I was finally learning what it meant to be a biologist.

Over the years, I've heard enough of these stories to know that this phenomenon is widespread. There are, of course, regulations about how you use experimental animals (those with backbones, at least), but scientists off the job sometimes get adventurous. Nobody's eating endangered or rare species, but beyond that, the sky is the limit. So I set out to learn who was scarfing their science, and what made them do it. The answers came pouring in, via Twitter, Facebook and email. I heard from so many scientists, I started to wonder: Who hasn't eaten their study organism?

Some scientists are lucky in that they study delicious plants and animals. I got a lot of responses from these fortunate few, for whom eating their study organism was as easy as heading to the grocery store. Blueberries, trout, yeast, lobster, strawberries and rice sound like the makings of a pretty fabulous dinner. Kelp and wild boar are unusual, but nothing you couldn't find in a hip Brooklyn restaurant.

But what I was most interested in were the few, the bold — those scientists who let their curiosity lead them to what some might consider rather ill-advised places. Who, in their quest to understand an organism inside and out, made sure it spent some time, well, on the inside.

We can't start any discussion of eating strange plants and animals without invoking that epicure of evolution: Charles Darwin himself. You see, Darwin was quite the adventurous eater, even before he became a naturalist. At Cambridge, Darwin was a member of the Glutton Club, a group of students devoted to devouring "birds and beasts which were before unknown to human palate," according to a college friend. They tasted hawk and a heron-like wading bird called a bittern, but the club dissolved after trying to eat a brown owl, "which was indescribable," Darwin reported.

Once he embarked on The Beagle, Darwin's penchant for bold food choices continued to evolve. He ate puma ("remarkably like veal in taste"), iguanas, armadillos. He not only ate giant tortoises, but tried drinking their bladder contents: "The fluid was quite limpid, and had only a very slightly bitter taste." He ate a 20-pound rodent (usually assumed to be an agouti) that provided "the very best meat I ever tasted." He even accidentally ate part of an ostrich-like bird called a lesser rhea, after spending months trying to catch it so that he could describe the species. (Don't worry: Once he realized what they were dining on, Darwin made everyone stop eating and sent a package of leftover bones, skin and feathers back to England.)

Sometimes, the sampling is ostensibly for science. In 1971, Richard Wassersug published a paper that tested the comparative palatability of eight species of tadpoles. That's right — Wassersug's experimental subjects tasted (though didn't swallow) tadpoles. Wassersug's hypothesis was that if a tadpole were easy to catch, it would probably taste bad, since in nature, if you're not very good at getting away from predators, you probably survive best if you taste horrible. For the experiment, he says, "I needed a predator that had general broad-spectrum tastes." But in the jungle of Costa Rica, options were limited. "The most available generalist predators I could find were fellow grad students, who were bribed with beer," he says.

Though Wassersug wasn't a subject ("I would have been biased!"), he tasted the tadpoles, too. And his study supported the rule that easy-to-catch tadpoles were gross. "In truth," he says, "none of them tasted sweet and delicious." But one species of tadpole stood out: toad tadpoles. "It was one of the worst things I'd tasted," he says. "So astonishingly bitter. A teaspoon full of Tabasco sauce might get you close."

Today, this study would never be permitted. But it was the '70s! And what wouldn't grad students do for beer?

Or because of beer.

Mark Siddall is a leech expert and curator of invertebrates at the American Museum of Natural History, but years ago he was a graduate student taking a break from studying leeches to drink beer around a campfire. Someone dared him to eat one. "I thought, OK," he says, "but it might be a little dangerous to pop a leech in my mouth. It has a sucker! It might go crawling down my windpipe if I lost control of it!" So he anesthetized it ("I don't remember, it may well have been [with] whiskey") and roasted it over the campfire. "It tasted a lot like charcoal."

Richard Wassersug has a similarly alcohol-fueled story about salamanders. In fact, he once got into a salamander-eating contest. Wassersug's competitor ate six salamanders; Wassersug ate only one. "I took mine with a mouthful of vodka," he says, "and did swallow it." How did it compare with tadpoles? "I didn't bother to taste it," he says. "It felt like a salamander in my mouth."

One great argument for eating study organisms is that it's an excellent way to dispose of invasive species. Sarah Treanor Bois did her Ph.D. research on invasive plants, and told me about an invasive species cook-off she attended. Some of the better dishes she tried featured pulled nutria, house sparrow drumsticks and bullfrog legs, with garlic mustard pate and Himalayan blackberries on the side. "Not only is eating invasives a great way to bring attention to the problem," she wrote, "many of them taste great. And you never feel bad about overharvesting!"

But the reason I heard most often for eating strange things is good old-fashioned scientific curiosity.

My favorite example came from Robert Thorson, a geologist, who in the late 1970s was in Alaska studying rock layers. In a thawing bank of permafrost, he and his colleague found the frozen carcass of a 30,000-year-old, now-extinct giant steppe bison. You know where this is going. Thorson pulled some meat out of the ice.

"It came out attached to a bone fragment," he writes via email. "I wasn't trying to prove anything, I was just curious to see what such old meat tasted like. So I hauled it down to the stream, rinsed it free of silt, and chomped away."

And the verdict? "It had a weird stringy, leathery texture," he says, "with little flavor beyond the ambient pungent rankness."

And on that note, we must step back and consider the big picture: Why are scientists so comfortable chowing down on unusual things?

Mark Siddall thinks it's all about familiarity. Think about the average omnivore, he tells me. They eat what they're familiar with: chicken, beef, pork. "Now fundamentally," he says, "the contents of a lobster — muscle and exoskeleton — is not dramatically different from the contents of a crayfish." And a crayfish isn't that different from a grasshopper, but to many, a grasshopper is not familiar as food. To people who grew up eating grasshoppers, however, that's dinner.

So it makes sense that biologists eat what they study, he says. "There are few other organisms on the planet that they're more familiar with."

To Richard Wassersug, eating your study organism is more of a side effect of being a naturalist. "There're so few people left that are attentive to nature," he says. But naturalists still pay attention. And in Wassersug's opinion, the curiosity that led scientists to study the world makes them want to experience it more fully: through seeing, smelling, feeling and, yes, even tasting. "To be a naturalist is a prelude to bringing your total sensory systems into play when you meet up with nature," he says.

That makes a kind of sense. But when I tell Wassersug about Thorson and the steppe bison, he says, "He beats me!" then pauses. "There's a certain sense of competitiveness," he admits. "We know other [scientists] have tasted their own animals. We feel we ought to do it as well."

Jessie Rack is a doctoral candidate in ecology and evolutionary biology at the University of Connecticut, where she studies (but doesn't eat) salamanders. She is a 2015 Mass Media Fellow with the American Association for the Advancement of Science.