Accessibility links
Restaurants Feed New Orleans' Recovery: 'I Knew I Had To Come Back' : The Salt After Hurricane Katrina wiped out the city 10 years ago, locals fought hard to preserve their deep-rooted cuisine. But devastation also brought opportunities for more experimental eateries to move in. 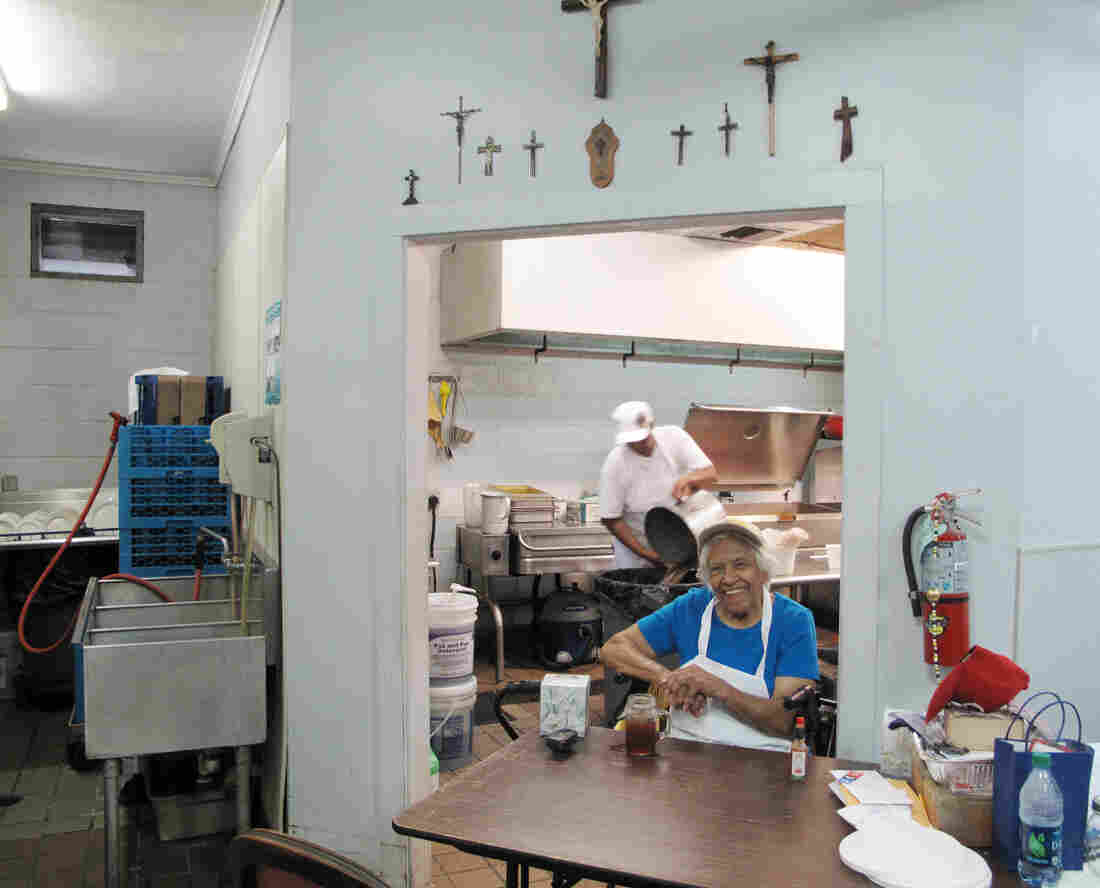 Chef Leah Chase, 92, here in the kitchen of Dooky Chase, had no qualms about rebuilding the restaurant her father-in-law opened in 1941 in New Orleans' Treme neighborhood. Debbie Elliott/NPR hide caption 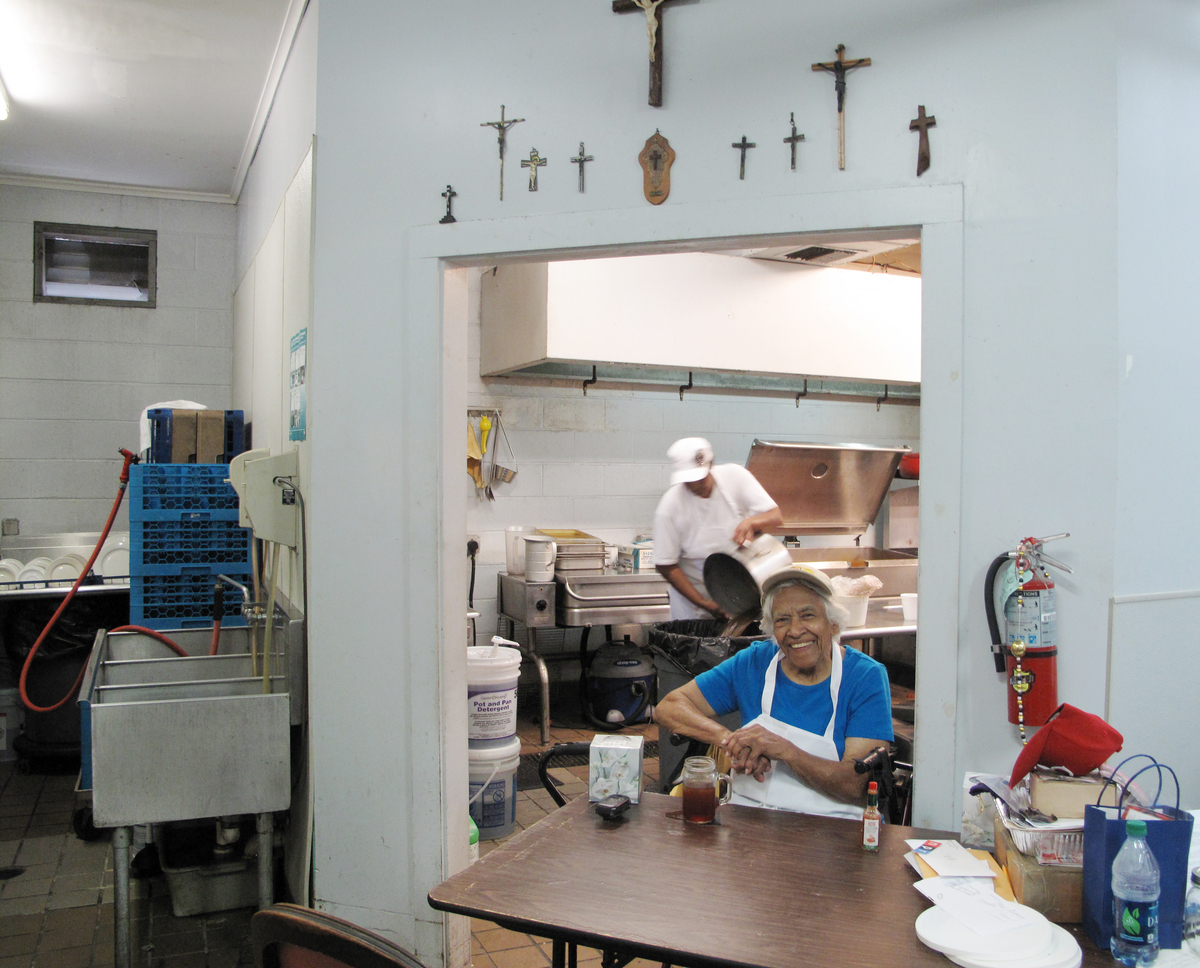 Chef Leah Chase, 92, here in the kitchen of Dooky Chase, had no qualms about rebuilding the restaurant her father-in-law opened in 1941 in New Orleans' Treme neighborhood.

Baskets of perfectly seasoned deep-fried chicken sizzle during lunch hour at Dooky Chase Restaurant in New Orleans, a city famous for its food. But the real magic happens early in the morning, when Leah Chase, 92, arrives to prepare the day's specials.

"I made meatloaf today. Smothered pork chops. I did oyster and artichoke soup," says Chase.

Dooky Chase is a landmark in the city's historically African-American Treme neighborhood.

Resting her legs at a table in the bustling kitchen, Chase says when her father-in-law Dooky and his wife, Emily, first opened the restaurant in 1941, it was groundbreaking.

"The so-called Creoles of color didn't have any place to go. But they knew my father-in-law and my mother. So they would come here," Chase says.

In the decades that followed, Dooky Chase became a fine-dining destination for civil rights leaders, musicians and more recently presidents.

After Hurricane Katrina devastated the city 10 years ago, the storied restaurant, along with many others, was 5 feet underwater. But Chase had no hesitation about rebuilding: "I knew I had to come back. I knew I could come back," she said.

Dooky Chase received an outpouring of financial support from around the country. The family moved into a FEMA trailer across the street and started over, reopening in two years.

That resolve was inspirational, says food writer Lolis Eric Elie, who was also a story editor for HBO's Treme.

"Each time a restaurant like Dooky Chase came back online, it reminded us that others among us were dedicated to the return of our city," Elie says.

It took nearly eight years for another Treme landmark, the Circle Food Store, to get back on its feet. The city's first African-American owned grocery originally opened its doors in 1939.

Elie says the return of such authentic neighborhood places is a comfort: "The big fear was that New Orleans would come back as a caricature of itself, as a sort of Disneyfied version of itself."

That didn't happen, in part due to the raw determination of locals to preserve what they had despite the chaos of government response after Katrina.

Chef Donald Link had opened his downtown restaurant Herbsaint and was about to launch another, Cochon, in 2005.

"Here you are evacuated from your home, and knowing your home is destroyed and most of the city is gone. And if you listen to the media: 'It'll be another six to nine months before anybody can come home,' and I mean ... you can't say that. This is my city, it's my home. Nobody's going to tell me when I can come back," Link says.

Two weeks after Katrina, Link says, he and his father fashioned fake passes in order to get past the national guard checkpoints that surrounded the city.

Herbsaint was not flooded. Link says he found the tables still set, but the food had spoiled.

"A hundred degrees, no a/c, no electricity. It was rotten. It was bad. Real bad," Link says.

He wore a gas mask to clean out the walk-in cooler, and tried to reach staff spread around the country. In five weeks, Herbsaint was serving food again. Link says being able to eat from real china was like therapy for people who had lost everything.

"Inside these walls, everything felt normal. It's just kind of like the first restaurants that opened were like this beacon of hope that everything's gonna be all right. It can be done," Link says. 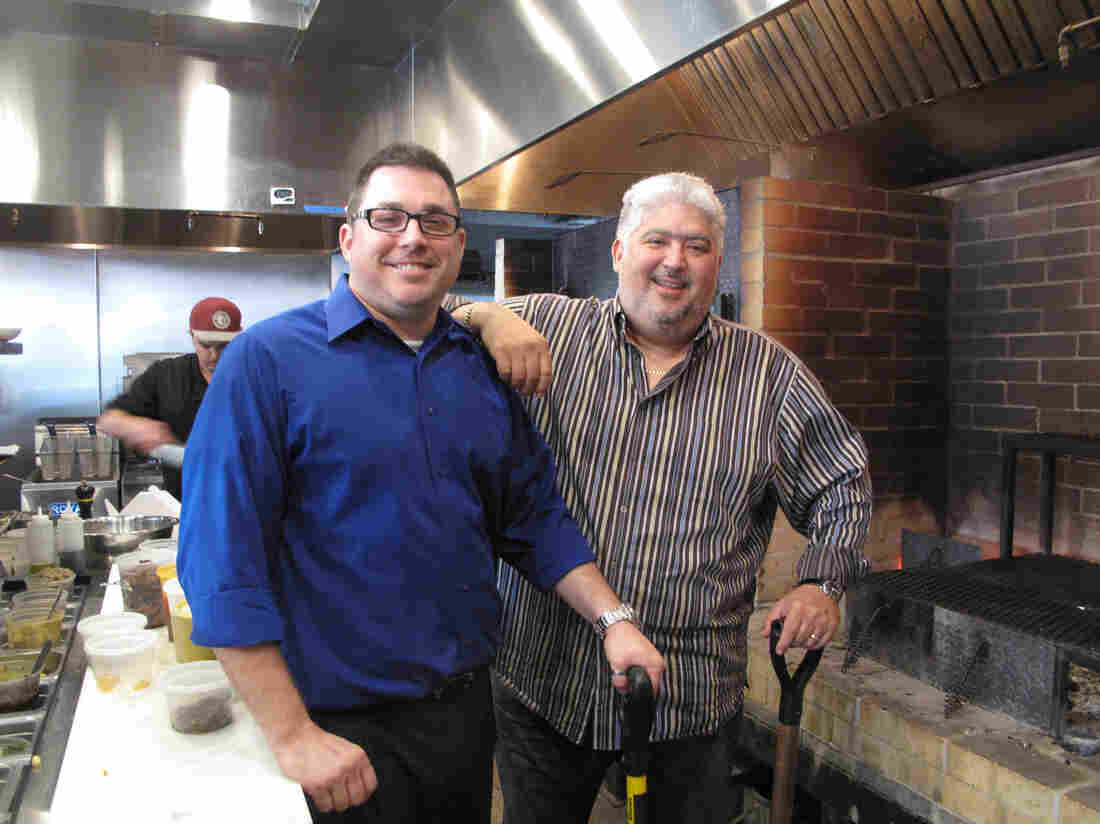 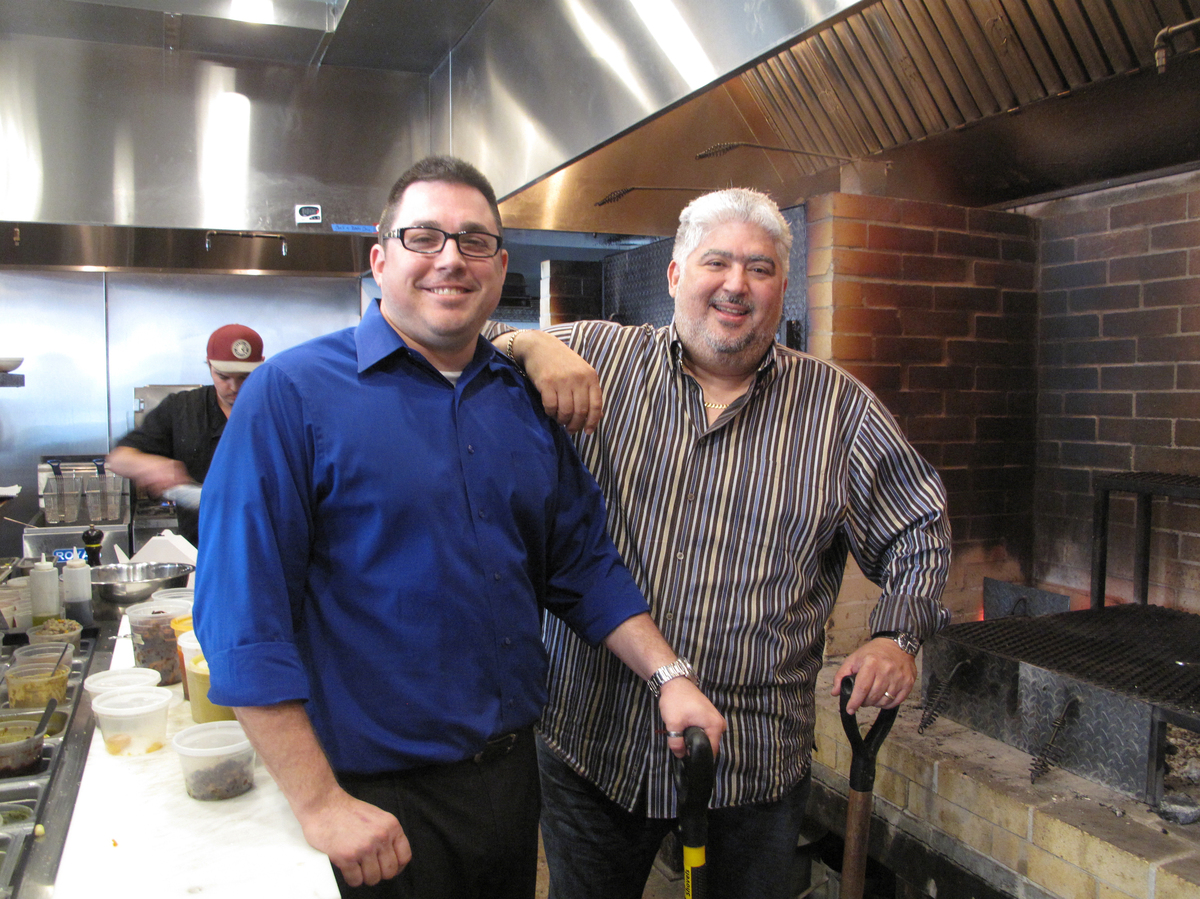 Link has since opened four more acclaimed restaurants in New Orleans, part of a food renaissance that has spread to parts of the city that had languished even before the storm.

On Oretha Castle Haley Boulevard, named for a local civil rights leader, the city has targeted a once-blighted commercial corridor for redevelopment. Along with storefront churches, a fresh food market is preparing to open. There are new museums, art and cultural centers, nonprofit headquarters and restaurants.

Chef Adolfo Garcia opened his restaurant Primitivo earlier this year along with his partners Jared Ralls and Ron Copeland. Garcia had one restaurant before Katrina. Now he's involved in four.

Garcia says the post-Katrina rebuilding period has opened the door for more experimentation in what had been a mostly traditional restaurant scene.

"It's given opportunity to other people ... next generation, they don't have to have a trout meuniere restaurant, they can do whatever they want. They can do Filipino food, Asian, Latin food. There's all these opportunities out there," Garcia says.

Elie says seeing the new commerce on the boulevard is encouraging, but "Unfortunately I don't see the people who have lived in this community for generations as being the customers for this kind of place."

That's been a recurring concern as New Orleans has come back. The city's population is up to about 80 percent of pre-Katrina levels, but it has about 30 percent fewer black residents than it did before. 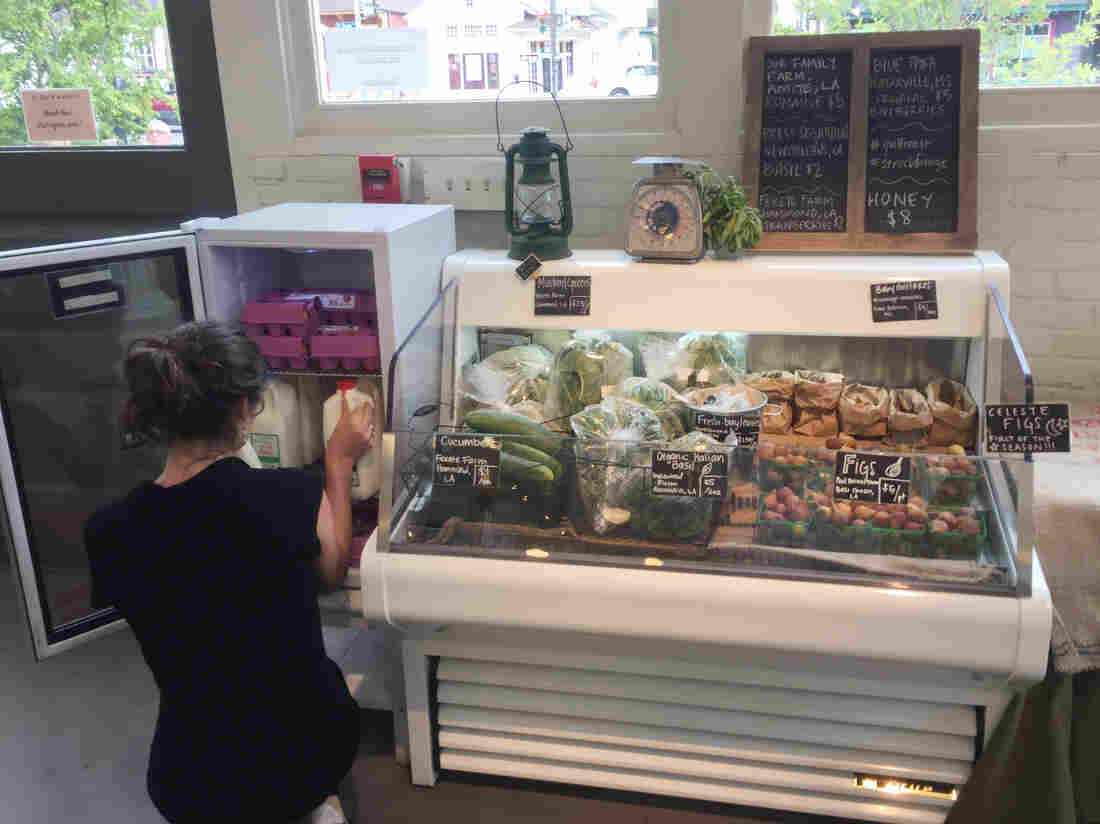 A woman grabs some milk at St. Roch, a light-filled hall lined with food stalls inside an open-air shell that dates back to 1875. Debbie Elliott/NPR hide caption 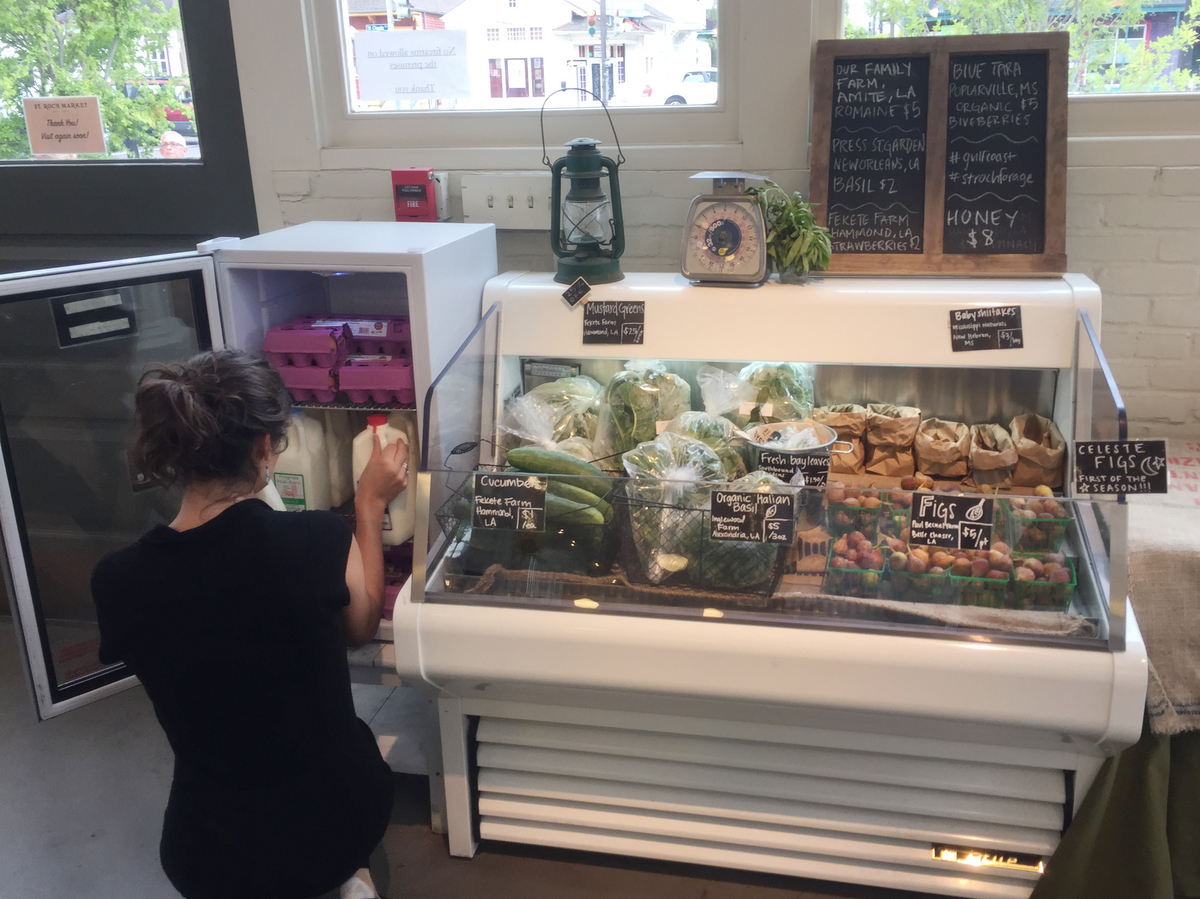 A woman grabs some milk at St. Roch, a light-filled hall lined with food stalls inside an open-air shell that dates back to 1875.

Questions of gentrification have swirled around another redevelopment project touted by the city — the historical St. Roch Market. The light-filled hall lined with food stalls opened earlier this year in the shell of an open-air market that dates back to 1875.

Retired policeman Ed Perkins is waiting at a counter for a spicy chicken sandwich, reminiscent of the po'boys once sold there. He's not troubled by the new look, he says, because St. Roch has been abandoned for so long.

"These were rough areas. Most people drove through here at 60 mph with windows rolled up. But it's turned around," Perkins says.

He says it's only fitting that food is part of the city's recovery: "New Orleans is food, music and hospitality. I love it. This is tradition. This is New Orleans. This is the real New Orleans."