Accessibility links
Guzzling 9,000 Years Of History With 'The Comic Book Story Of Beer' : The Salt A new illustrated history explores beer's journey from the cradle of agriculture, to the rise and fall of Ancient Rome, to the modern-day craft beer heyday. 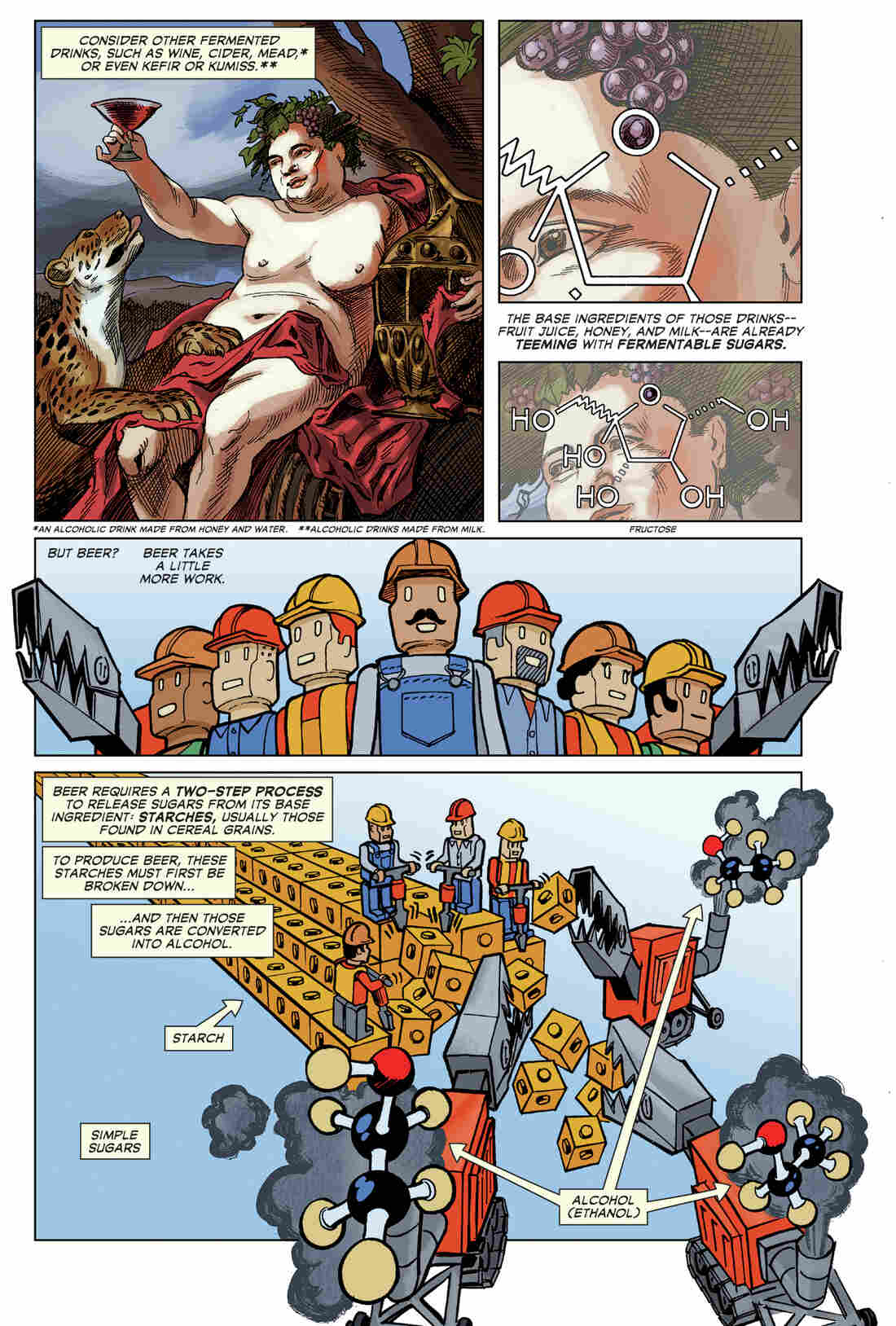 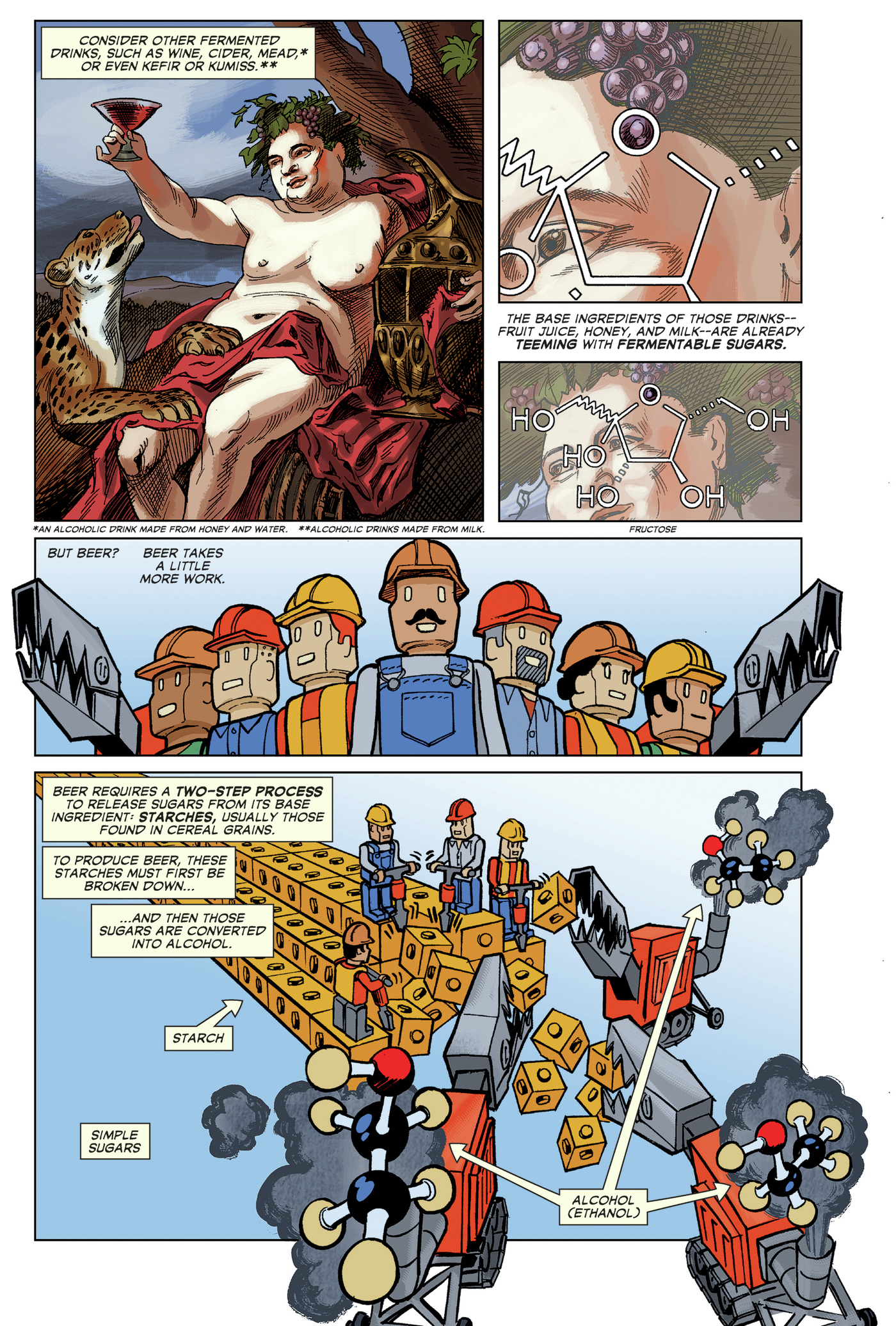 In ancient times, farmers worried about losing precious grain to spoilage during wet winters. So they figured out how to malt grain and brew it into beer, thus preserving a nutritious source of calories. In The Comic Book Story of Beer, due out in September, we get a graphical tour of such pivotal moments — from the cradle of agriculture to the modern-day craft beer heyday.

Illustrator Aaron McConnell, writer Jonathan Hennessey and professional brewer Mike Smith cover a lot of ground in 173 pages. We learn that the covered beer stein was invented during the Black Death, when piles of bodies on the streets attracted flies and it was necessary to keep swarms of them out of drinks. The Vienna Lager style of beer was meanwhile born out of a 19th-century act of industrial espionage.

Food Comics Turn 'ZAP' And 'POW' Into 'Sizzle' And 'Bubble'

We spoke with the authors about the inspiration for the project and the challenges and joys of boiling 9,000 years of human history, economics, culture and, of course, beer into a graphic novel.

The Salt: What was the most interesting thing you learned about the history of beer while researching this book?

John Hennessey: One eye-opening revelation was that our culture arguably inherited a bias against grain-based beverages from the Ancient Greeks and Romans. Oriented as they were in grape-growing regions, the Greek and Roman civilizations were centered around wine. Beer was the choice of the "barbarian" enemies that surrounded them, and this doomed beer and beer drinkers to a second-class status for centuries to come. 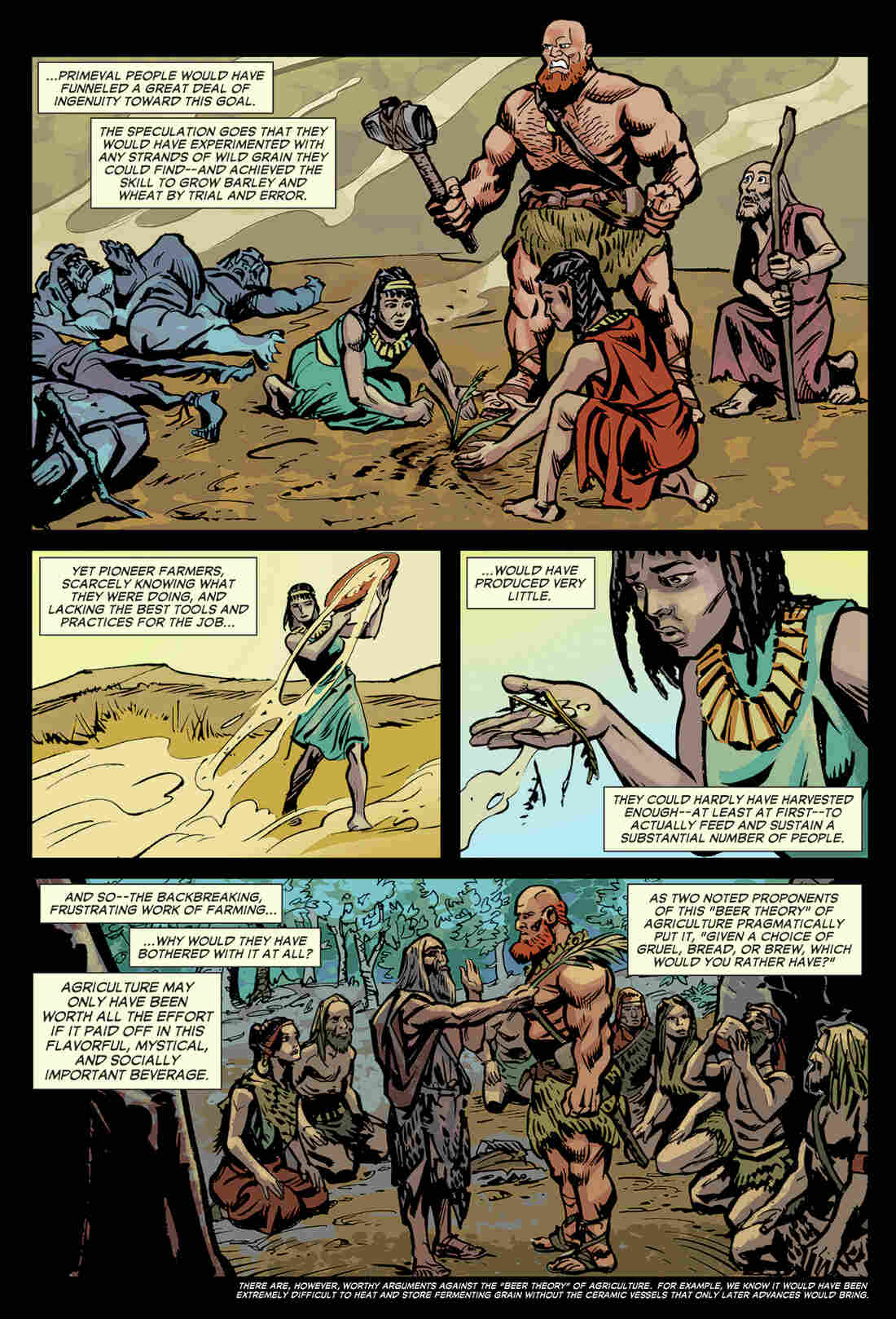 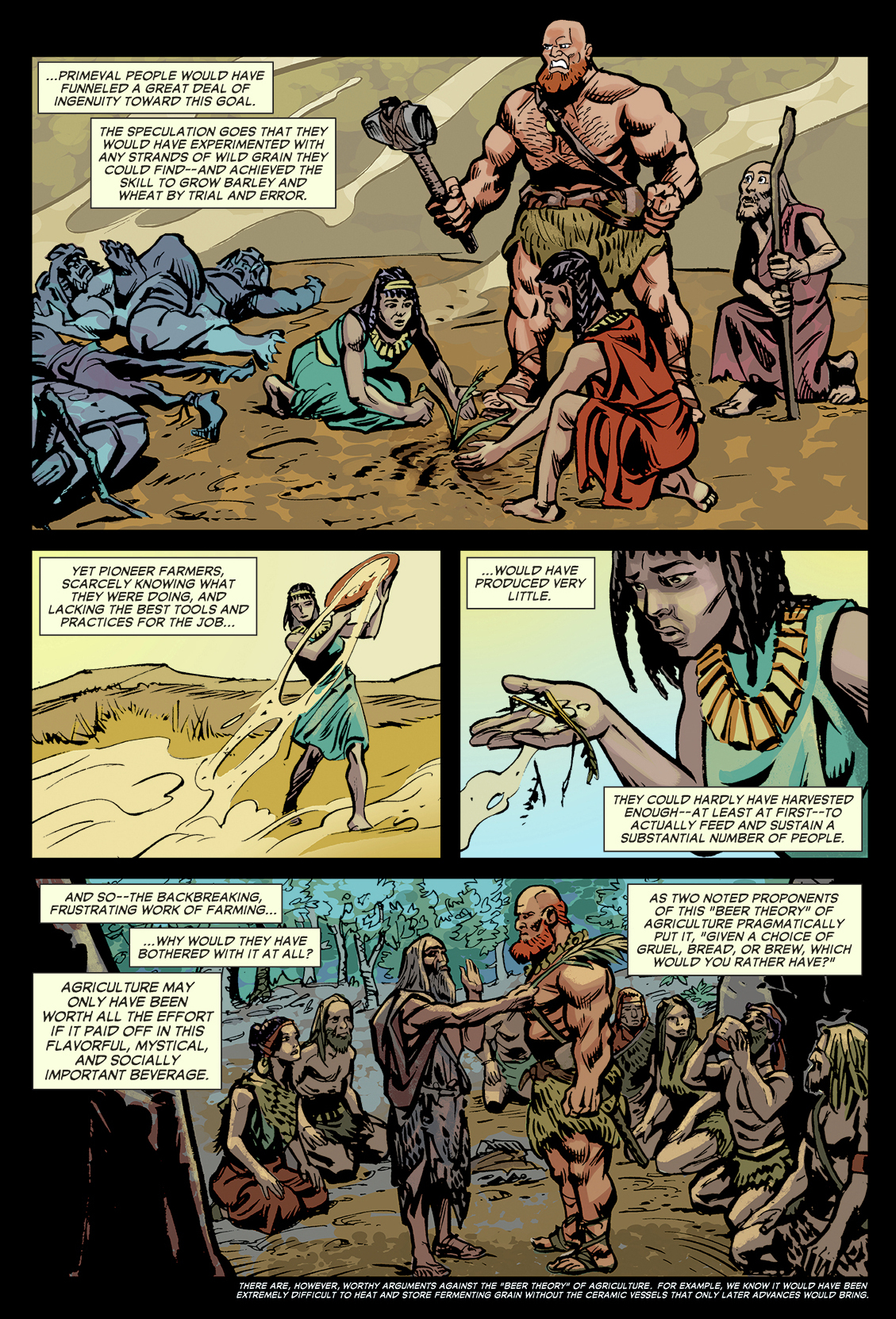 The Salt: Your book covers 9,000 years of history. Does a story about craft beer really need to go back so far in time?

Mike Smith: Yes. Beer is so cool because it is everything. It is a metaphor for human history. In many ways it shaped the world, and its history still affects us now. As I'm mixing grain to brew a beer, how cool is it that the tax structure [on beer ingredients] of Medieval Europe affects what I'm doing now? [Barley and hops became the primary ingredients of beer due in part to taxation and economic forces.] Or, the way that Neolithic farmers needed to store their grain over the winter [as beer] — how cool is it that that's part of what I'm doing here, now? And while it seems mind-blowing and new to be drinking a delicious sour beer with blood orange and mint from the craft brewery down the street, it's still a part of the story that goes all the way back to the very beginning of civilization — I think that's fascinating. 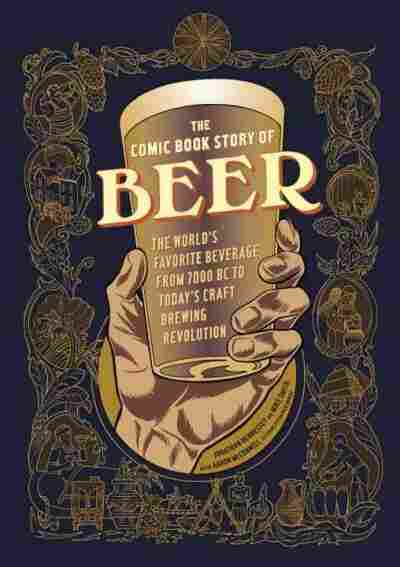 The Comic Book Story of Beer

The Salt: The history of beer has been told before. How does the comic-book format break new ground?

Mike Smith: A lot of beer books tend to be very serious, and I think the comic medium allowed us to tell the story of beer with a degree of levity. Another thing is, in the part of the book that explains just what beer is, we talk about sugar molecules, or long chains of starches, being broken apart by enzymes. It's really a simple, simple, simple thing that's happening, but it can seem very dry and be very hard to explain. When you draw it out with cartoon characters — little Lego men breaking apart things — it makes the concept a lot clearer.

The Salt: What was it like illustrating this graphic novel, with its focus, in parts, on beer chemistry and culture, as opposed to others you have illustrated?

Aaron McConnell: There was more opportunity to get playful. .... The beer chemistry info is depicted with a variety of colorful characters and visual metaphors. I particularly enjoyed drawing the "Yeast-Bots" gobbling up starch and converting it to alcohol. Also, there's a nod to a favorite Dr. Seuss story in the depiction of the malt-roasting process.

Mike Smith: Yes, certainly. There is a lot of geek overlap between beer and comics. A lot of the same sorts of people who are comic fans are craft beer drinkers. The genres themselves are similar in some ways, too. Just as beer is now exploding, so are comics. They're both mainstreaming now. And, just like we have so many types of beer, with a different beer for every different occasion, in comics there are so many little niches that really allow comic book fans to geek out the way beer people sometimes do, and so beer and comics tend to invite a really similar personality type.

An earlier version of this post stated that "in ancient Rome, women were the brewers." This is inaccurate. An earlier version also incorrectly stated that lagers were born out of industrial espionage. In fact, lagers predated the espionage; it instead led to the reinvigoration of the Marzenbier style and creation of the Vienna Lager style of beer.