Accessibility links
At Farm To Ballet, Watch Vermont's Cows And Tomatoes Do Arabesques : The Salt A dance troupe is performing the story of a Vermont farm from spring to fall, told through reinterpretations of classical choreography.

At Farm To Ballet, Watch Vermont's Cows And Tomatoes Do Arabesques

At Farm To Ballet, Watch Vermont's Cows And Tomatoes Do Arabesques 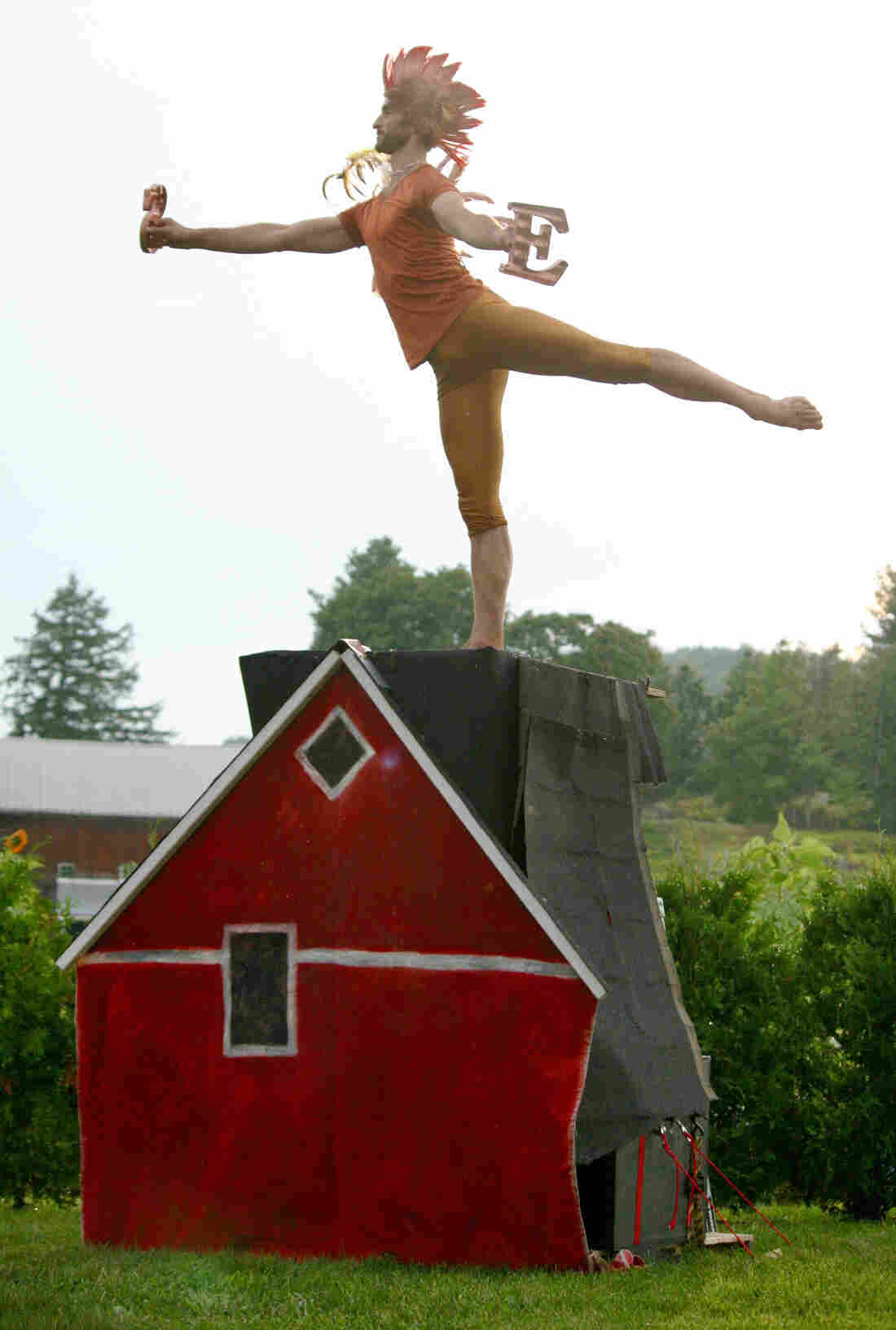 At a farm in Charlotte, Vt., Chatch Pregger dances as a weathervane rooster. Pregger, who directs the Farm to Ballet project, modified classical ballet dances to depict the changing seasons on a New England farm. Sujata Gupta for NPR hide caption At a farm in Charlotte, Vt., Chatch Pregger dances as a weathervane rooster. Pregger, who directs the Farm to Ballet project, modified classical ballet dances to depict the changing seasons on a New England farm.

In a grassy Vermont field as a horse skitters in the distance, dancer Chatch Pregger is scaling a makeshift barn. He stretches his arms outward, holding an E for East in his hand. As the chicken feathers on his head flutter in the breeze, it's easy indeed to imagine him as a graceful weathervane rooster.

You've heard of farm-to-table, surely. Vermont is now one step ahead, with Farm to Ballet, a series of performances across the state this month. It's the brainchild of Pregger, a professional dancer who has performed with the Boston, Washington, D.C. and Houston ballets. As a native Vermonter, he wanted to create a performance piece around the state's bucolic rhythms.

To create the spectacle, Pregger modified classical ballet pieces to depict the seasons on a New England farm, starting with a dance titled "Return of the Geese" and culminating with "Geese Fly South" – both set to Swan Lake. Cows, as we know, can dance, kicking up their heels the ways humans do. At Farm To Ballet, humans dance as cows. The hour-long affair is also chock full of dancing chickens and waving fronds of lettuce.

If Pregger, now a ballet teacher at Spotlight dance studio in South Burlington, Vt., has clear dance bona fides, his knowledge of farming is more limited. "I know what comes in my farm share," he says, referring to the selection of veggies he gets from a local farm every week. 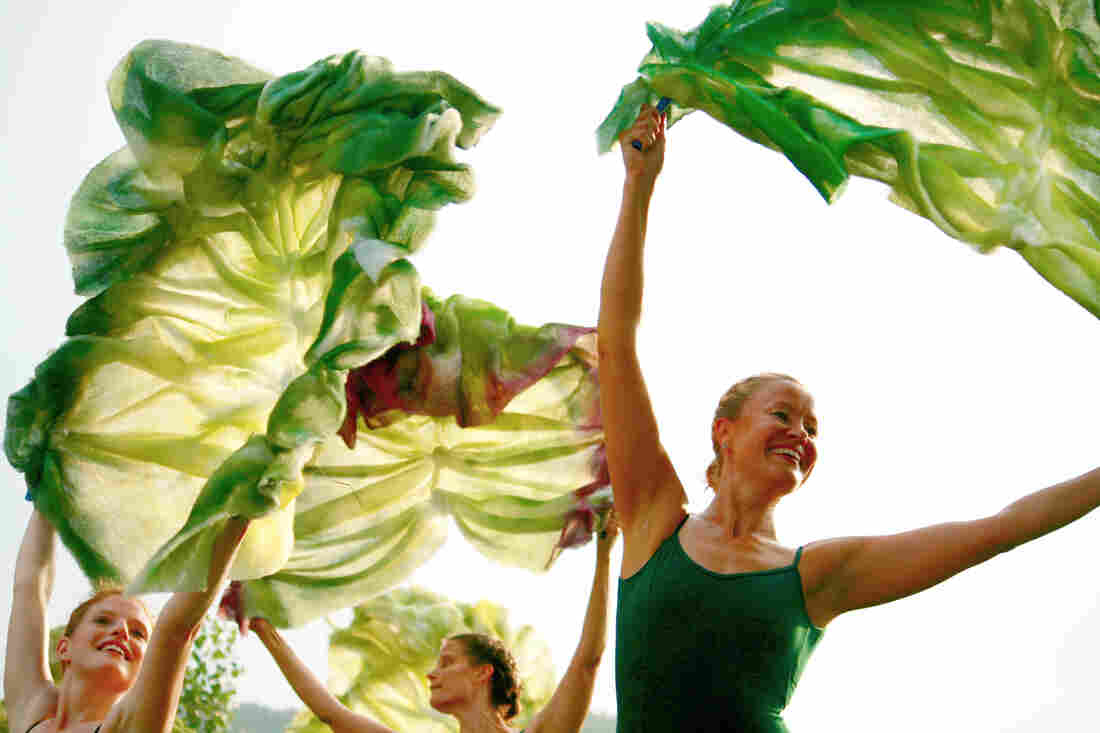 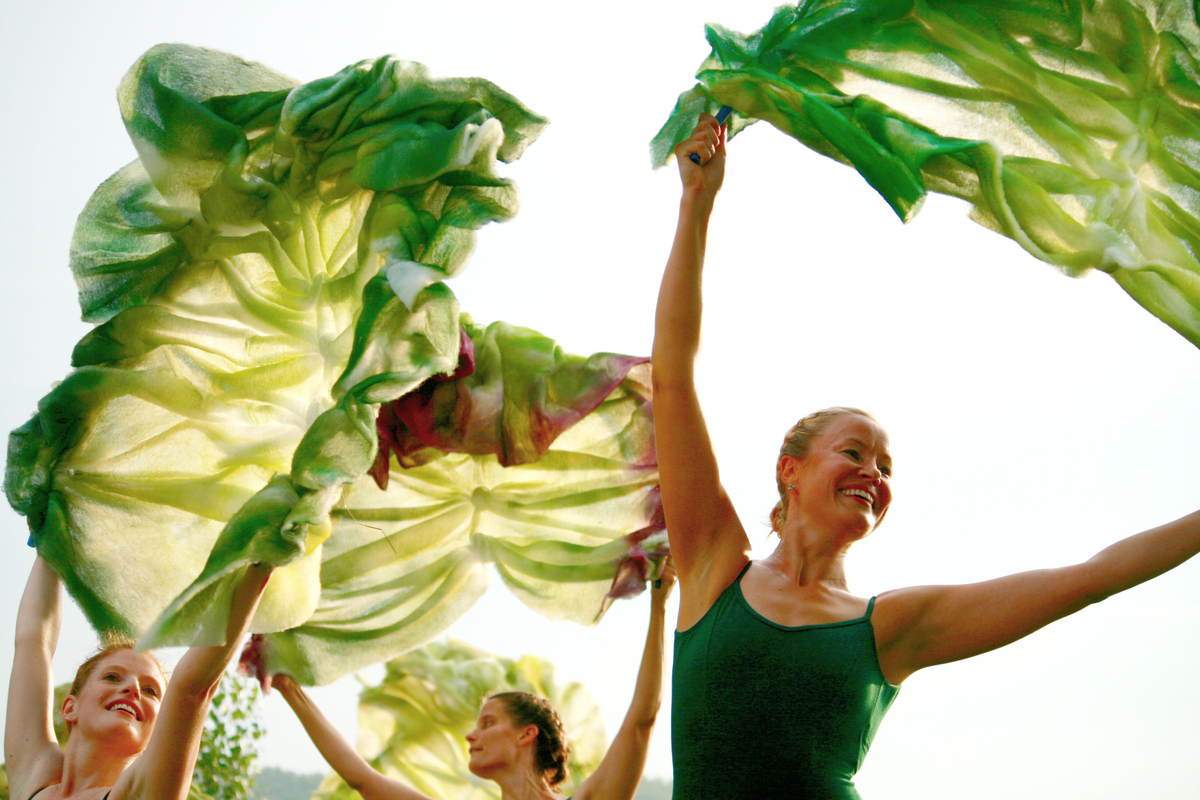 The idea for the project emerged last year when he held a couple adult classes at a local park. He and his students got to wondering if there was a way to combine their love of the outdoors with ballet. Given their commitment to eating local, the group joked about basing the performance around food. Nobody took the idea seriously at first, says Rini Lovshin-Smith, a preschool teacher who only began studying ballet two years ago. But eventually the idea took hold, especially as dancing with a backdrop of salad greens and livestock seemed so quintessentially Vermont.

To sort out just how to create a food-centric ballet, Pregger set out to learn the backstories of those weekly shares of kohlrabi and garlic scapes. "I talked to a lot of farmers," he says. Those conversations largely set the mood and tone of the performance.

In one piece called "The Salad Dance," Pregger modified a selection from the ballet Giselle in which two lovers, Giselle and Albrecht, dance with grape pickers. In his rendition, Pregger replaced Albrecht's love of Giselle with a Vermont farmer's true loves: cows, goats, bees and tomatoes. 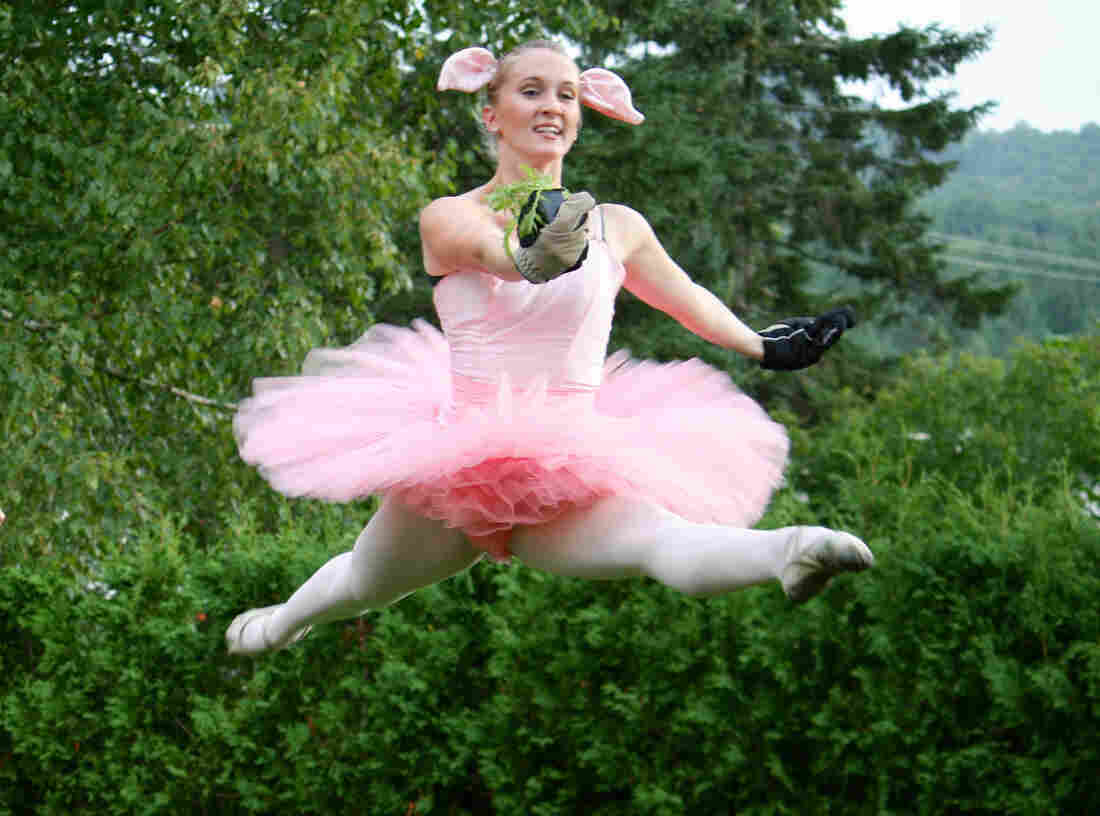 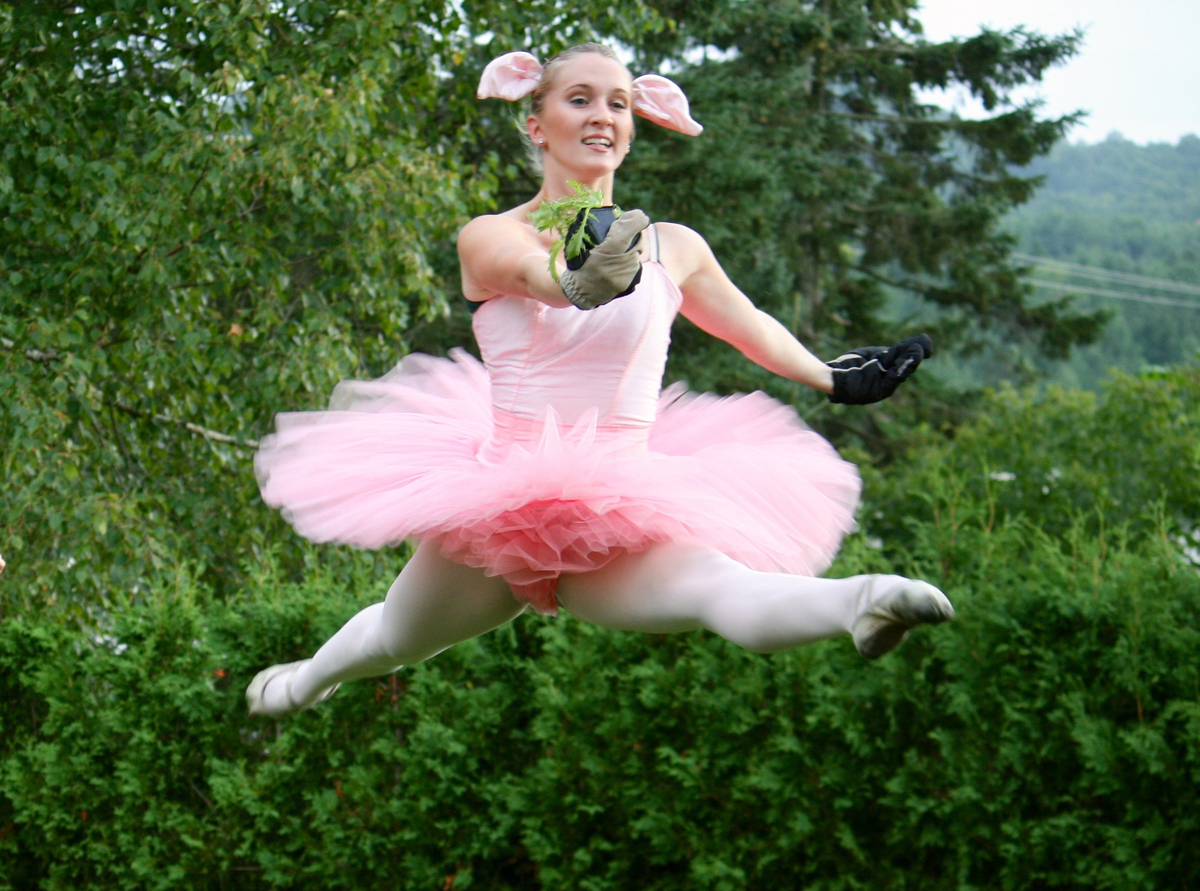 Kyla Paul performs a grand jete in the Farm to Ballet Project.

Through his research, Pregger learned that tomatoes require near constant tending and trimming. "They're naughty," Pregger says. So in the Farm to Ballet, when the farmer points to the lettuce heads, they dutifully run to their places, but when she points to the tomatoes, they wag their fingers at her and go exactly where they please.

Pregger himself choreographed a few numbers, including one involving a bee and another an apple tree, when he couldn't find a suitable dance to modify. To prevent twisted ankles on grass, he replaced turns and pirouettes with soaring jumps and leaps.

Proceeds from the seven performances, held at farms across the state and running through Aug. 23, go to nonprofit organizations that support agriculture, the arts, or both. To date, Preggers says the shows have been a resounding success, with each small farm performance attracting 200 or more audience members and often selling out.

At one performance on Aug. 15 at Philo Ridge Farm in Charlotte, a town about 20 miles outside of Burlington, Will Dempsey, a business analyst for the state, is there to watch a friend of his mother's perform. "We didn't expect chairs," he says.

Meanwhile another couple saw an ad for the performance when they went to pick up their farm share and couldn't resist. "I'm not a ballet person at all," says Susan Munkres, a sociologist at the University of Vermont in Burlington, "but I love gardening."

But she, along with the rest of the crowd, are entranced. As the show hits its finale and the musicians launch into a segment from Swan Lake, Pregger climbs the doghouse-sized barn again. Only now, the sun has begun to set and the clouds and hilltops glow orange. Pregger appears as a silhouette against the darkening sky. The crowd lets out an appreciative "ahhh."

Sujata Gupta is a freelance science writer based in Burlington, Vermont. Her work has appeared online and in print in the New Yorker, BBC, NovaNext, Scientific American and others. Follow her on Twitter @sujatagupta.