Accessibility links
No-Fear Homemade Mayonnaise: Better Than What's In The Jar : The Salt This week in our Do Try This At Home series: Making mayonnaise that's just as delicious as, if not better than, what comes out of the jar. 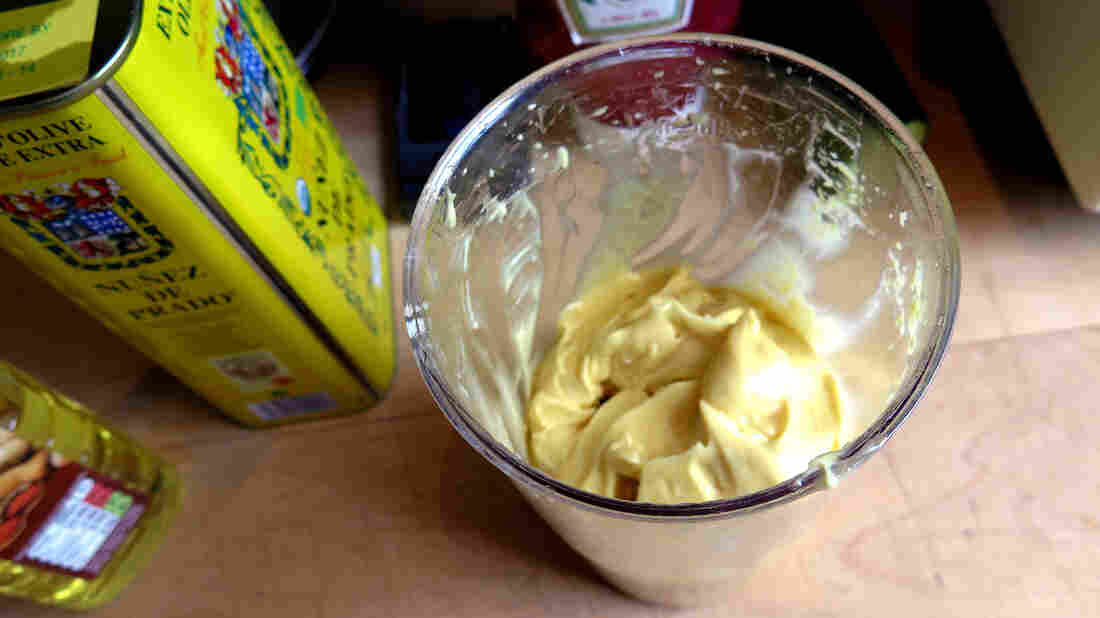 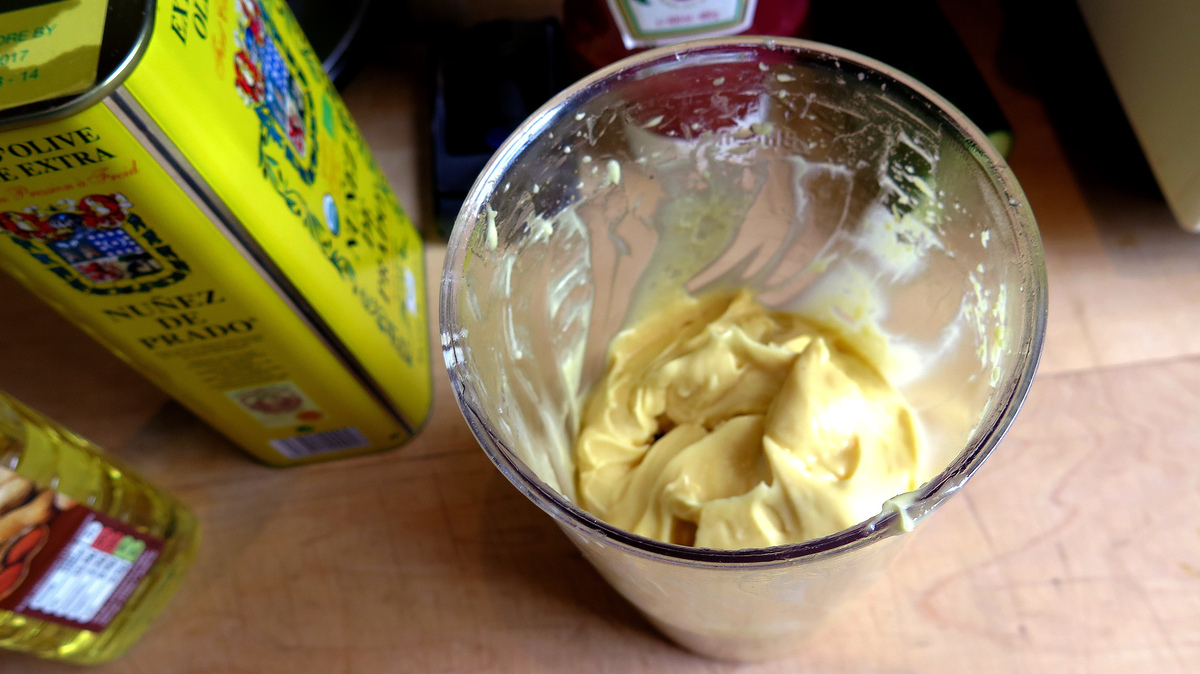 Chef Simon Hopkinson says mayonnaise is a total pleasure to make, but people are often frightened to try to make it themselves.

This summer, NPR is getting crafty in the kitchen. As part of Weekend Edition's Do Try This At Home series, chefs are sharing their cleverest hacks and tips — taking expensive, exhausting or intimidating recipes and tweaking them to work in any home kitchen.

This week: Making mayonnaise that's just as delicious as, if not better than, what comes out of the jar.

Simon Hopkinson created a highbrow restaurant, Bibendum, in West London and he has been filling seats there for nearly 30 years. His books, like Roast Chicken and Other Stories, are famous. So this is a man with class.

And he's noticed that "mayonnaise ... is something that is such a pleasure to make, but people are often frightened of it, and it's one of the most delicious things."

Hopkinson has two secrets for making mayonnaise at home. The first one is to spare your arms and use an electric whisk. 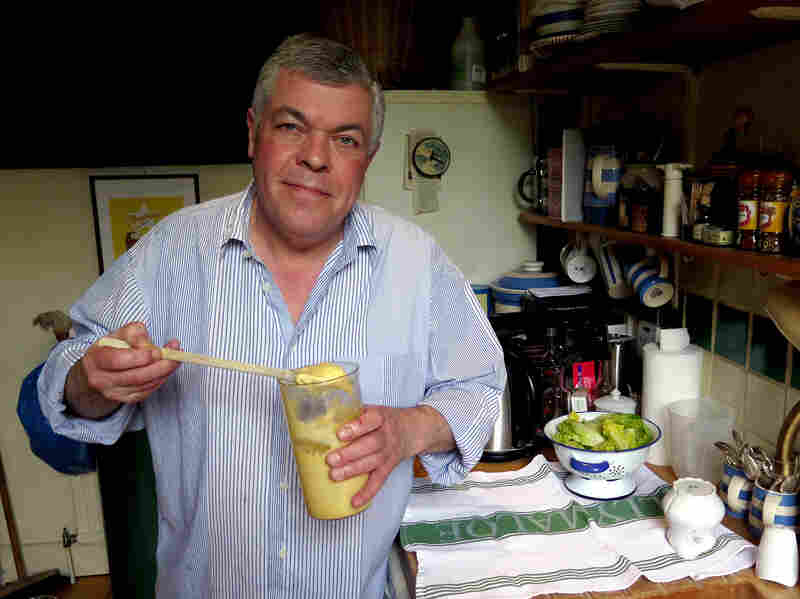 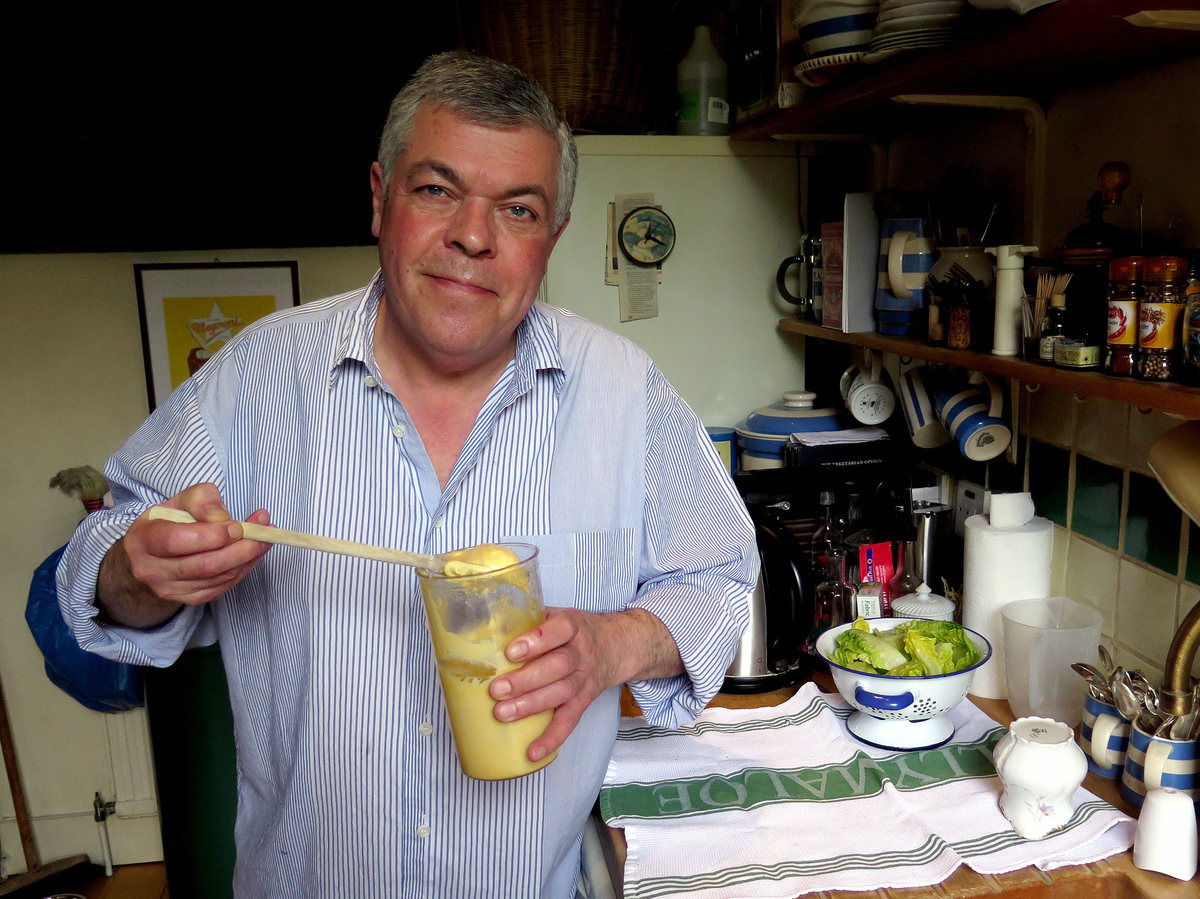 Chef Simon Hopkinson created a highbrow restaurant, Bibendum, in West London and has been filling seats there for nearly 30 years.

The second secret is to use a tall, narrow beaker, or a small pitcher, not a wide bowl. That way everything stays in one place and doesn't splatter.

You start with two egg yolks, a blob of Dijon mustard, a squeeze of lemon, salt and white pepper.

Throw that into the beaker and whisk it around a bit. Then comes the oil — he uses a mix of olive oil and peanut oil.

Slowly pour a thin stream of the oil into this mixture as you're whizzing it in the beaker. And then you turn up the speed a little bit, so it gets absorbed.

One final touch: a splash of boiling water to smooth the taste.

That's it: glossy, smooth, homemade mayonnaise. It's more yellow than the version out of a jar and tastes much fresher.

It's also a base for a variety of other lovely sauces.

Then comes Marie Rose — sort of like Thousand Island dressing. It's a classic British sauce from the 1950s, usually served with cold shrimp.

It's just a big dollop of mayo, a shake of Tabasco, a squirt of ketchup and a trickle of cognac. It "needs to be pink," he says. "Very important."

Hopkinson pivots easily from lowbrow to highbrow. He reaches into his crowded fridge and pulls out a Tupperware container. Inside is lobster. What a happy surprise!

He puts a bite of lobster on a small lettuce leaf topped with the Marie Rose.

"Just coat it with the sauce. And a little, just to pretty the thing, a little shake of cayenne or paprika on the top," he says.

Simon Hopkinson suggests putting a few of the lobster, lettuce and Marie Rose sauce bites on a plate, next to a bottle of summery wine.

A squeeze of lemon juice

Whisk together egg yolks, salt and pepper, mustard and lemon. Continue whisking as you add the oil, drop by drop and then in a steady stream, until the mayonnaise reaches the desired consistency. Season to taste with more lemon juice, if necessary. Stir in boiling water.

NOTE: Save your arms from exhaustion by using an electric whisk and a narrow, tall beaker.

Stir all of the ingredients together. This is a classic accompaniment to fried fish or seafood.

3 to 4 tablespoons mayonnaise (above)

A dribble or two of cognac

Stir all of the ingredients together. It should be regulation pink, a bit like Thousand Island dressing. Serve with cold shrimp or — if you're feeling decadent — lobster.