Accessibility links
Scourge No More: Chefs Invite Corn Fungus To The Plate : The Salt American and Canadian chefs are learning what Mexicans have long known: a bluish fungus that infects corn kernels is delicious. And now scientists want to figure out how to grow it on corn on purpose. 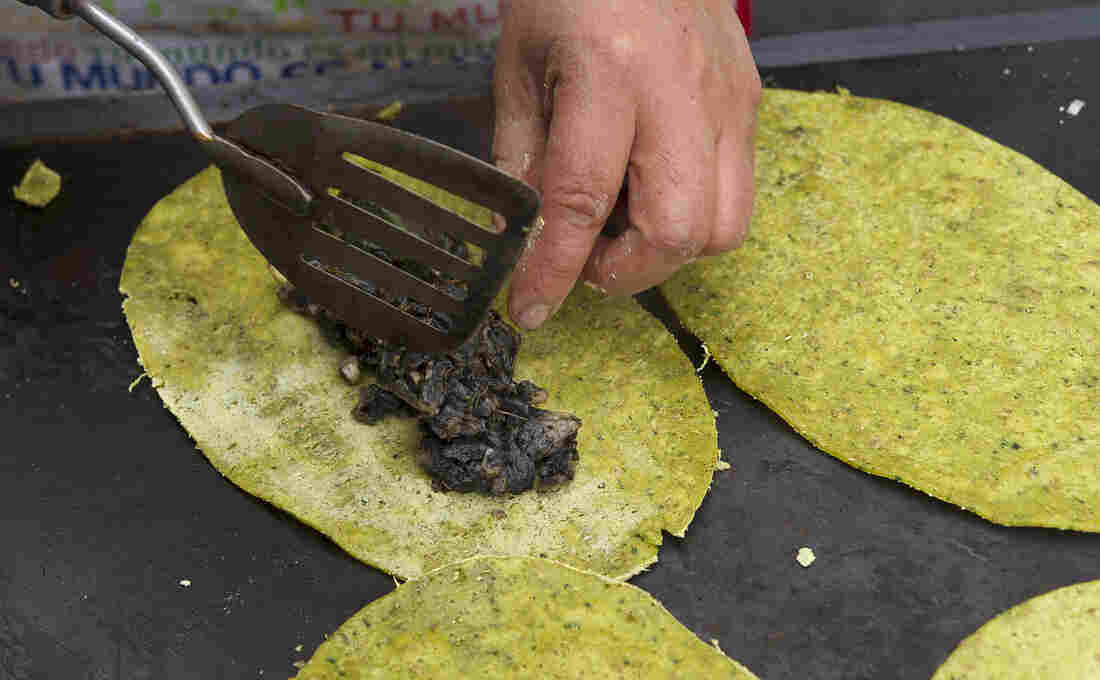 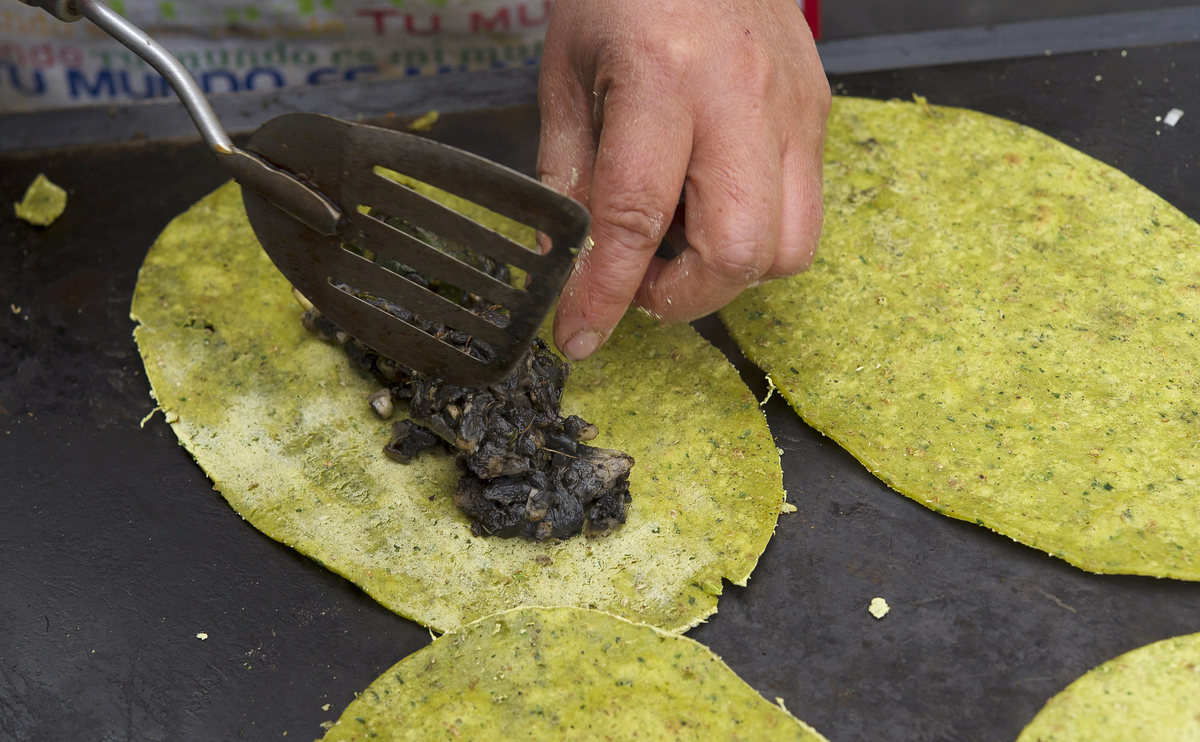 Huitlacoche quesadillas with spinach in Mexico City in 2013.

One evening last July, Nat Bradford walked along rows of White Bolita Mexican corn at his Sumter, S.C., farm, and nearly wept. All 1,400 of the corn plants had been overtaken almost overnight by corn smut, recalls Bradford, who's also a landscape architect. The smut, from a fungus called Ustilago maydis, literally transforms each corn kernel into a bulbous, bulging bluish-grey gall. It is naturally present in the soil and can be lofted easily into the air and onto plants.

Smut is considered a scourge by most U.S. farmers, and it goes by the nickname "devil's corn." Just one discolored kernel typically renders an ear completely unsellable. Bradford was particularly devastated because he was growing the corn for Chef Sean Brock, who'd imported the White Bolita seeds from Mexico and asked Bradford to grow it for the handmade tortillas he planned to serve at Minero, his Mexican restaurant in Charleston, S.C. After Bradford saw the smut, he sat at his kitchen table, shoulders slumped and said to his wife, "How am I going to tell him?" 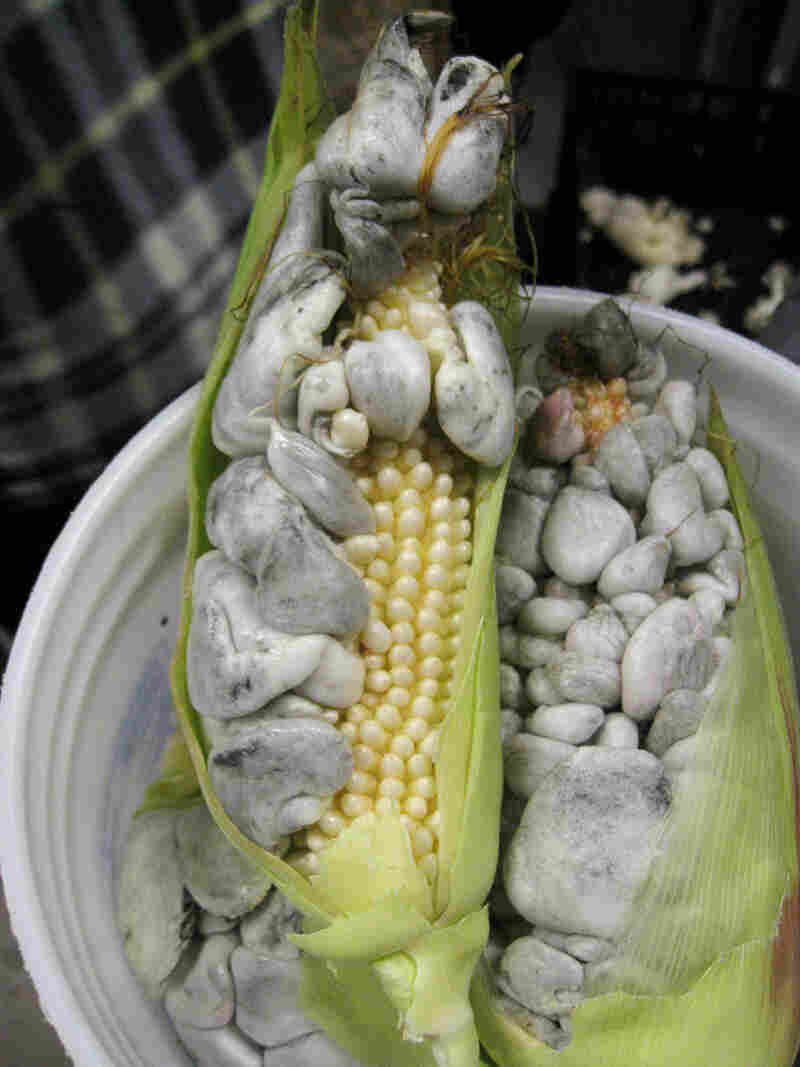 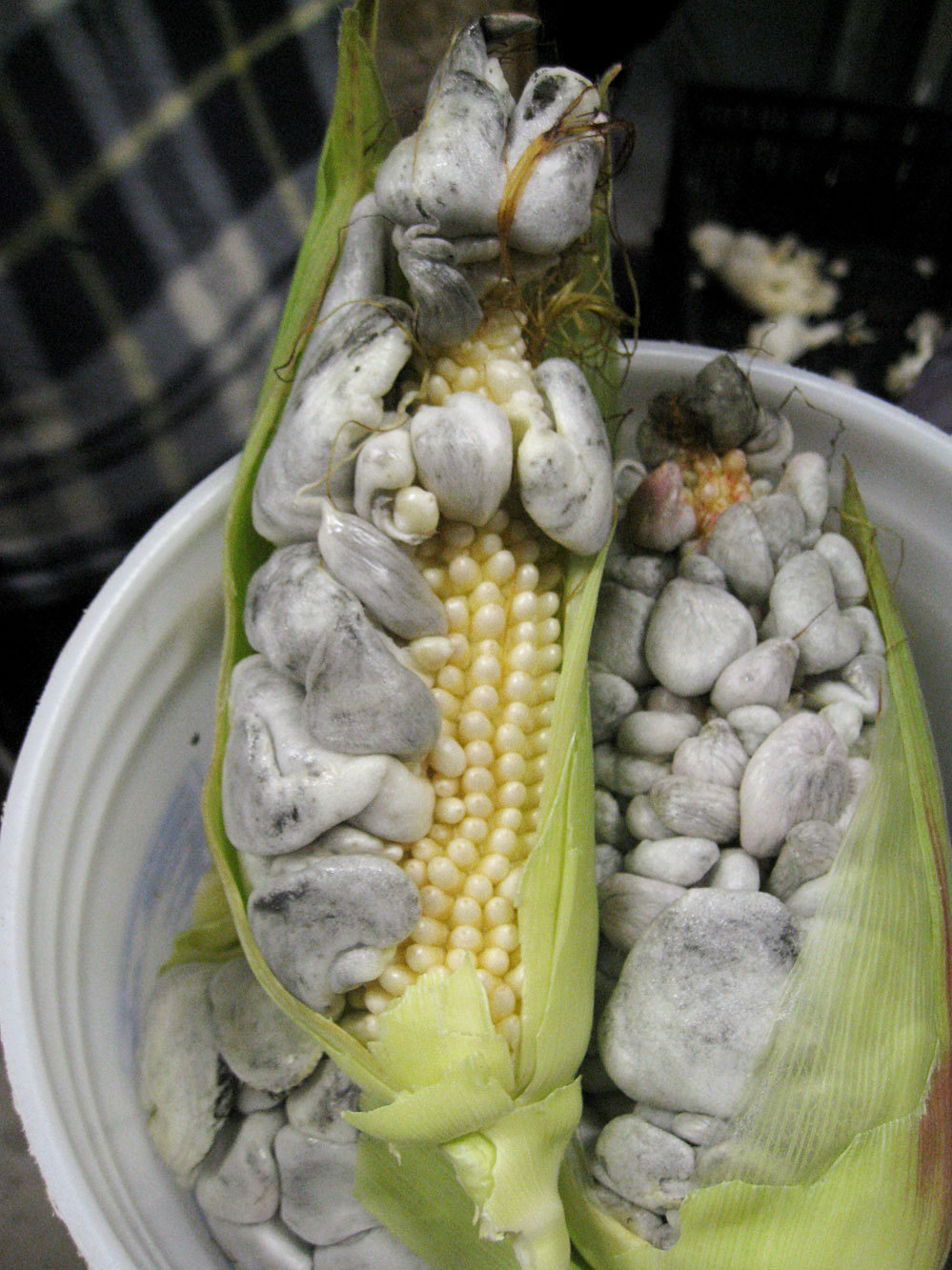 But one man's blight is another man's treasure, and Brock, also an executive chef at Husk Restaurant and co-owner of McCrady's Restaurant, both in Charleston was delighted to hear that his crop had been infested with the fungus. He'd first encountered it in 2001 when working with a chef named Walter Bundy at LeMaire restaurant in Richmond, Va.

He asked Bradford to harvest the smut by hand and bring it to Charleston, where Brock prepared tacos with it. "I love when nature throws you a curveball, and it tastes like this," says Brock. "It's insanely delicious and luxurious, like black truffles."

Brock isn't alone in his view—there has been a dedicated corn smut underground for decades in America, even as corn growers and the government have spent millions trying to eradicate it, forbid imports of it and breed strains of corn resistant to it.

But in Mexico, corn smut is known as huitlacoche, and it's long been a delicacy . Traditionally, families would walk miles among the cornstalks just to gather a basket of ears infected with this distant relative of mushrooms. It is still sold fresh at markets and used as a filling in tacos, quesadillas and soups. "It may have been ambrosia of the Aztec gods with an inky, mushroomy flavor that is almost impossible to describe," wrote Diana Kennedy, the "Julia Child of Mexico," in her 1986 book The Cuisines of Mexico.

In Mexico's corn-loving culture, the quasi-mushroom also provides nutrition: high amounts of the essential amino acid lysine that's absent in corn, as well as lots of fiber and protein. Together, corn and huitlacoche make a complete protein meal.

Here in the U.S., huitlacoche first gained national attention in 1989, when Josefina Howard, chef and co-founder of the Mexican food chain Rosa Mexicano, served a celebrated huitlacoche feast at the James Beard House in New York City. The restaurant still regularly offers huitlacoche dishes at its New York and Washington, D.C., locations, and it can be found at assorted other restaurants around the country.

But even if some chefs are keen to serve huitlacoche, it's difficult to source fresh. The fungal infection depends on nature's whims. "My husband Randall and I grow a really tall local heirloom field corn that produces one ear per stalk," says Liz Porter, of Buckeye Creek Farm in Woodstock, Ga. "When we get ears with huitlacoche we harvest them and sell it to local chefs. But we never know when it will show up."

Rosa Mexicano's executive chef, Joe Quintana, gets his huitlacoche flash frozen from the nation's only specialty grower: Roy Burns of Burns Farms Huitlacoche in Groveland, Fla. "More and more customers are willing to try it," says Quintana. "It's sweet, savory and earthy."

How A Sleepy Pennsylvania Town Grew Into America's Mushroom Capital

Farmers like Liz Porter and Nat Bradford say they would like to inoculate a certain amount of corn each year, with advance orders from chefs. That may soon be possible, as mycologists and scientists start to get involved in a new approach to infecting corn deliberately.

At Mushroom Mountain farm in Easley, S.C., mycologist Tradd Cotter has a 42,000-square-foot mushroom production facility. He is now growing huitlacoche on several varieties of corn, including Brock's favored White Bolita. "Years ago I found one black, dry kernel of corn in an old warehouse at Clemson University, ground it up and injected a solution into every ear of Silver Queen heirloom corn, a variety susceptible to the fungus, growing at my house," he says. "Within two weeks, we had our huitlacoche and we ate it all."

Cotter plans to produce and stock a pure liquid inoculum that farmers can buy —just as beer brewers buy yeast. He notes that huitlacoche must be picked when firm but spongy, sort of like a foamy popcorn, before it starts to degrade and turn sooty black. If harvested too late, it's not only far less tasty, but can loft clouds of black fungal spores into the air, which might infect the entire crop, as well as neighboring cornfields.

At Trent University in Peterborough, Canada, scientist Barry Saville is also working with a liquid inoculum. Saville specializes in genomic approaches to mitigate fungal threats to crops, but is fascinated by huitlacoche and runs a program to infect local varieties of sweet corn.

In 2014, Saville harvested over 600 pounds, all of which was used by local chefs in Ontario. One chef pickled the huitlacoche and later in the year another chef simply rinsed off the vinegar and used it as if it were fresh. Saville plans to offer it at farmers markets this fall and hopes Canadians will adopt the delicacy. "We eat lots of foods like this that don't look palatable, like mussels or bleu cheese. You just have to have the right mindset to eat it."

Nat Bradford, the farmer in South Carolina, is also hoping huitlacoche's moment has arrived. "Next year I'm going to make sure Chef Sean Brock has all he wants," he says. Bradford plans to import other Mexican corn strains along with White Bolita and with Tradd Cotter's help, infect his entire crop.

"Smut is part of the natural life cycle of corn," says Brock. "It's how Mother Nature works, and I'm thankful for that, because huitlacoche tastes like nothing you've ever had. It's a treasure."