Accessibility links
Chef Wants Diners To Remember Her Cooking, Not Her Blindness : The Salt Laura Martinez defied many skeptics when she opened up her Chicago restaurant, La Diosa, this year. It helps that she used to work for the late Charlie Trotter, one of the city's most acclaimed chefs. 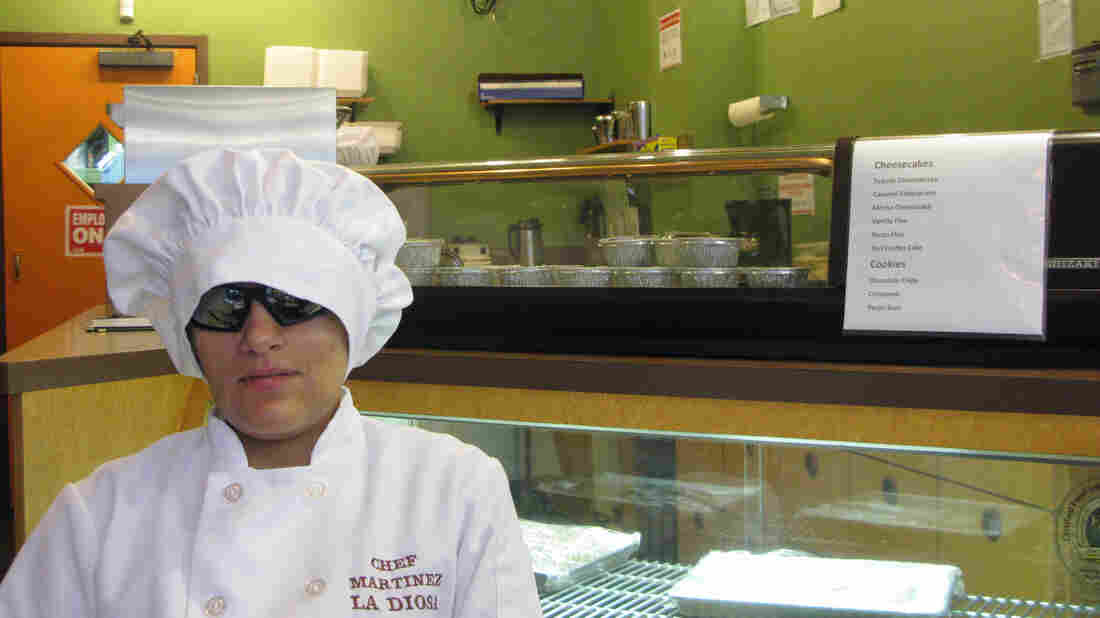 Laura Martinez may be the only blind chef in the country running her own restaurant. La Diosa opened in January. Martinez was hired directly out of culinary school by acclaimed Chicago chef Charlie Trotter and worked for him until his restaurant closed in 2012. Cheryl Corley/NPR hide caption 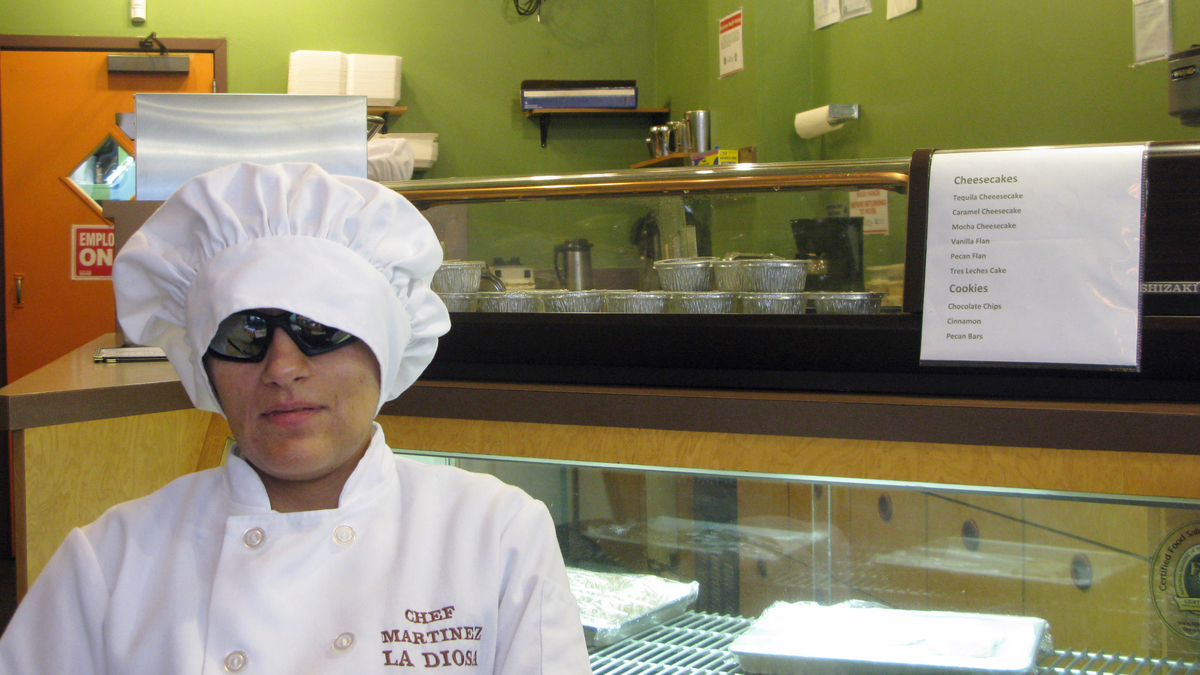 Laura Martinez may be the only blind chef in the country running her own restaurant. La Diosa opened in January. Martinez was hired directly out of culinary school by acclaimed Chicago chef Charlie Trotter and worked for him until his restaurant closed in 2012.

Many chefs dream of opening their own restaurant. But Laura Martinez faced an obstacle that many people thought would make that dream impossible to fulfill: The 31-year-old chef is blind.

It took two years for Martinez to open La Diosa, her tiny restaurant in Chicago, this past January. In addition to her white chef's jacket, Martinez wears dark sunglasses when she works.

The soft-spoken chef traces her passion for cooking to a few things. First, there were the knives: "I always loved knives. In fact, when I was a child, they were my favorite toy."

Later, in college, she didn't like the cafeteria food. "I was used to homemade meals from my mother and good food," she says, "so when I got this weird food, I didn't want to eat it. And I guess that when I started to focus on flavors and smells."

La Diosa means "the goddess" in Spanish. It is a modest space. Pictures and newspaper articles about Chef Martinez line one wall. There are five tables and some stools near a counter at the front window. 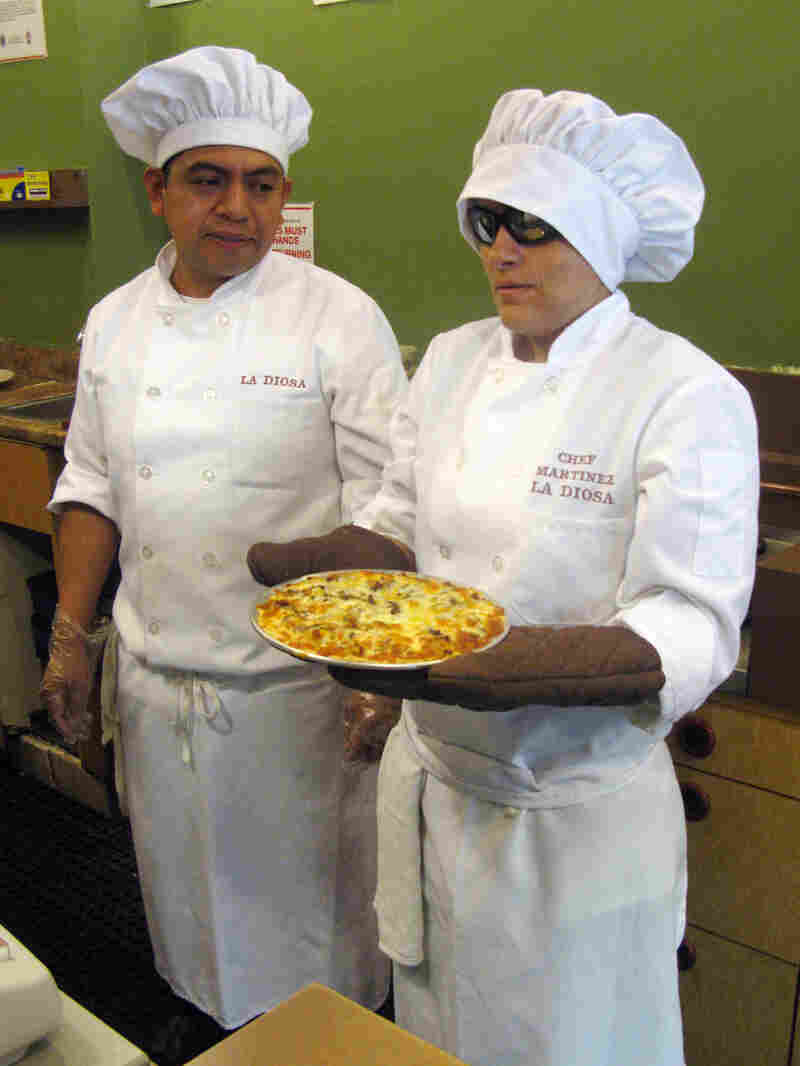 Chef Martinez and her husband, Maurilio Ortega, who also works at La Diosa, get ready to serve a tartizza. Martinez calls her creation something between a tart and a pizza, with a light, flaky crust. Cheryl Corley/NPR hide caption 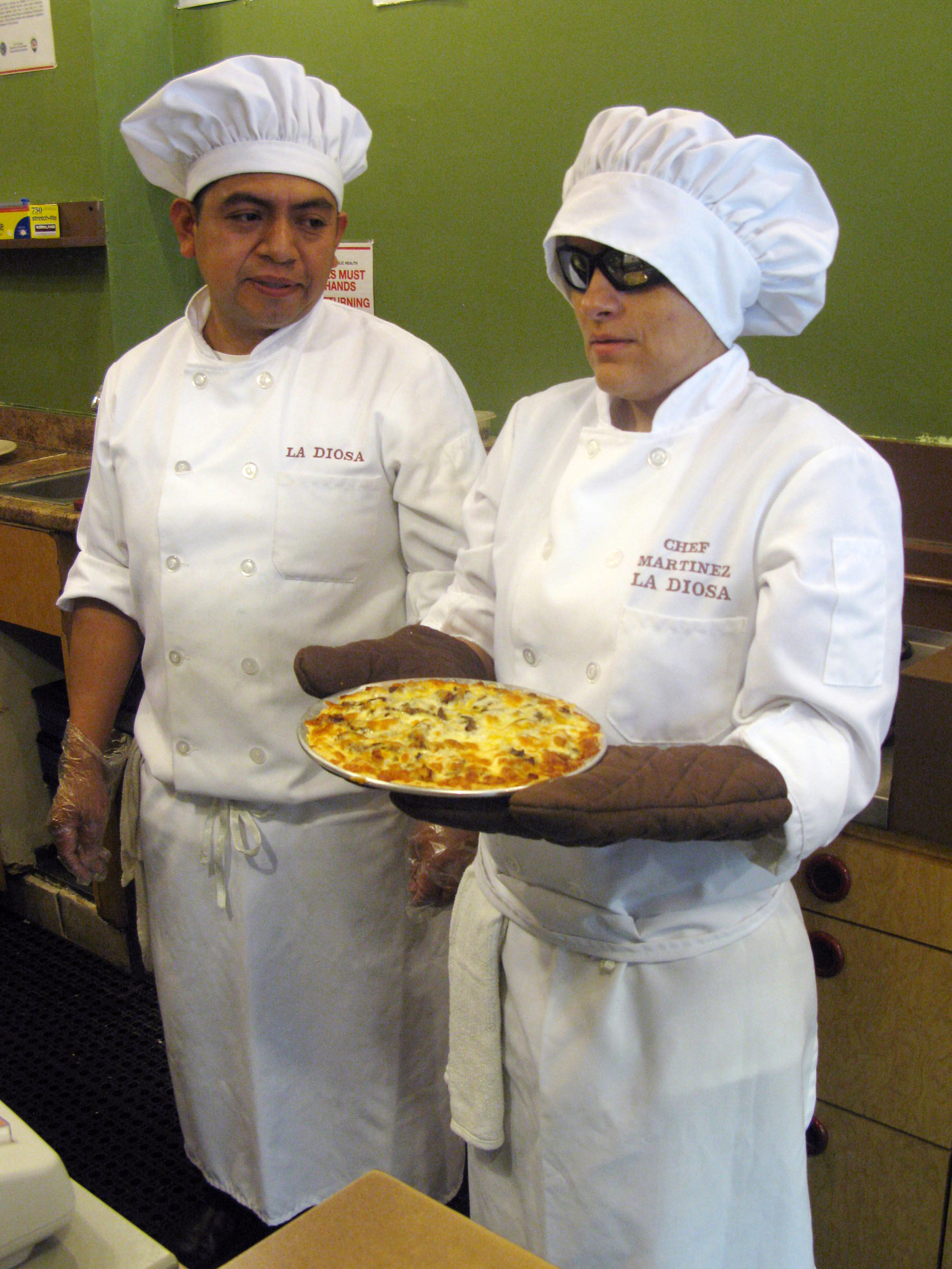 Chef Martinez and her husband, Maurilio Ortega, who also works at La Diosa, get ready to serve a tartizza. Martinez calls her creation something between a tart and a pizza, with a light, flaky crust.

Despite its size, La Diosa is a full-service restaurant that's open for breakfast, lunch and dinner. Martinez says her menu is Mexican comfort food with a French touch. In addition to quiches, omelets, quesadillas and empanadas, there's also her own creation, tartizzas.

"I call it tartizza," she says, "because it's kind of between a tart and pizza, but the dough is delicate and light, but flaky at the same time."

Martinez's husband, Maurilio Ortega, works in the restaurant as well. They jokingly call him Sous Chef Maury. As Martinez rolls out the dough for the tartizza, he gets the other ingredients ready, including Martinez's special sauce.

Martinez lost her eyesight to cancer when she was a baby. In college, she pursued a degree in psychology — she knew there were blind psychologists. But when she later decided to go to culinary school, she looked for blind chefs, and couldn't find one.

"I said, 'Oh, my God,' " Martinez recounts, "this is going to be interesting, because I like challenges." It was, indeed, a challenge. She got help from an attorney to get into culinary school. During an internship, her supervisor was not supportive.

Martinez got a break, though, when the now late Charlie Trotter, one of Chicago's most acclaimed chefs, watched her work, tasted her food, and offered her a job.

Martinez worked at Trotter's restaurant until it closed in 2012. Then, with no prospects in sight, she decided it was time to work toward her dream of opening a restaurant.

A business adviser, Andrew Fogarty, was flabbergasted at first by the idea of a blind chef, but then he worked with Martinez to develop a business plan.

"Chef had the name the first day we met," says Fogarty. "She had the idea for her dream; she had the menu. All she needed to do was execute."

Chicago Tribune restaurant critic Phil Vettel says a restaurant kitchen is a hectic madhouse, even for the sighted.

"It's kind of incredible," he says, that Martinez is running La Diosa.

Vettel says there's intense competition in Chicago's restaurant industry but that Martinez's former association with Trotter is tremendously helpful. "The food community and customers are very aware of names and reputations. It's an immediate statement of legitimacy," Vettel says.

Martinez says she knows that business is a gamble. Even so, she's already been an inspiration to others.

Another blind chef who won first place on a television cooking show sent out a message on Twitter telling Martinez so.

In the restaurant, after using her talking cash register to ring up a customer, Martinez says she has another wish. "Now that I'm known for being the blind chef," she says, "I want people to look beyond that." What she really wants people eating in La Diosa to remember, she says, is the food.