Accessibility links
Parisians On Hunt For Baguettes As Bakers Get Nod To Take Vacation : The Salt An arcane law required bakers to tell city hall when they wanted to close up shop. Now that it's been scrapped, bakers can close any time, leaving Parisians hungry for good bread amid summer holidays. 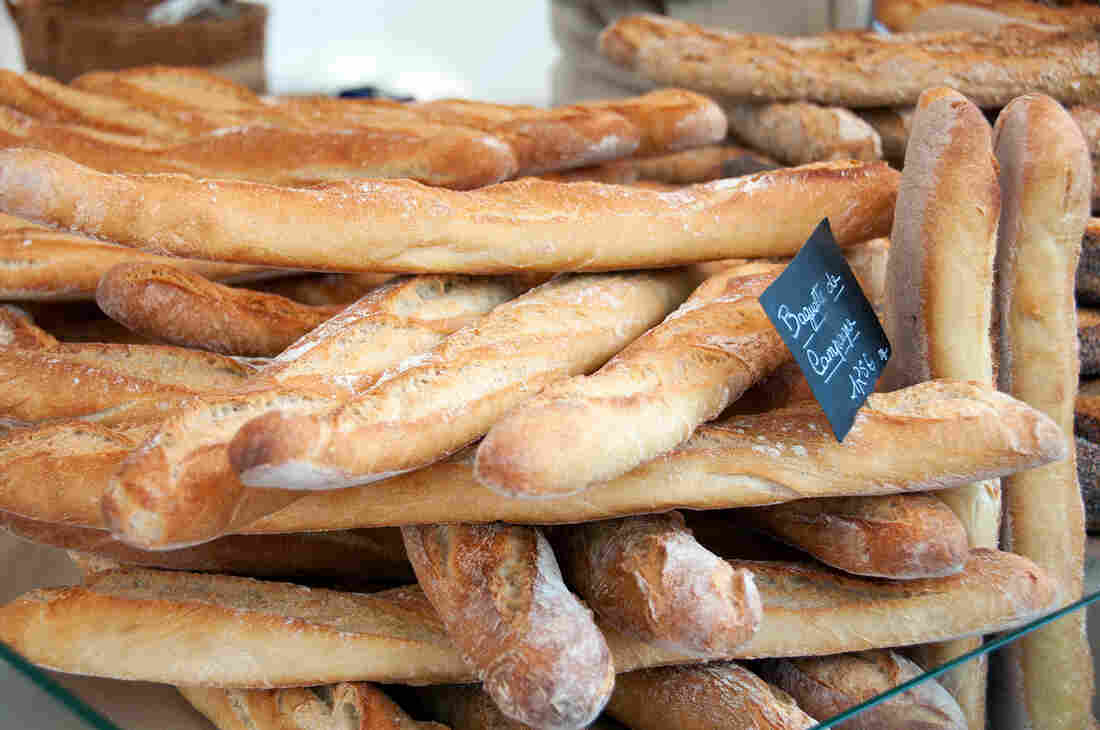 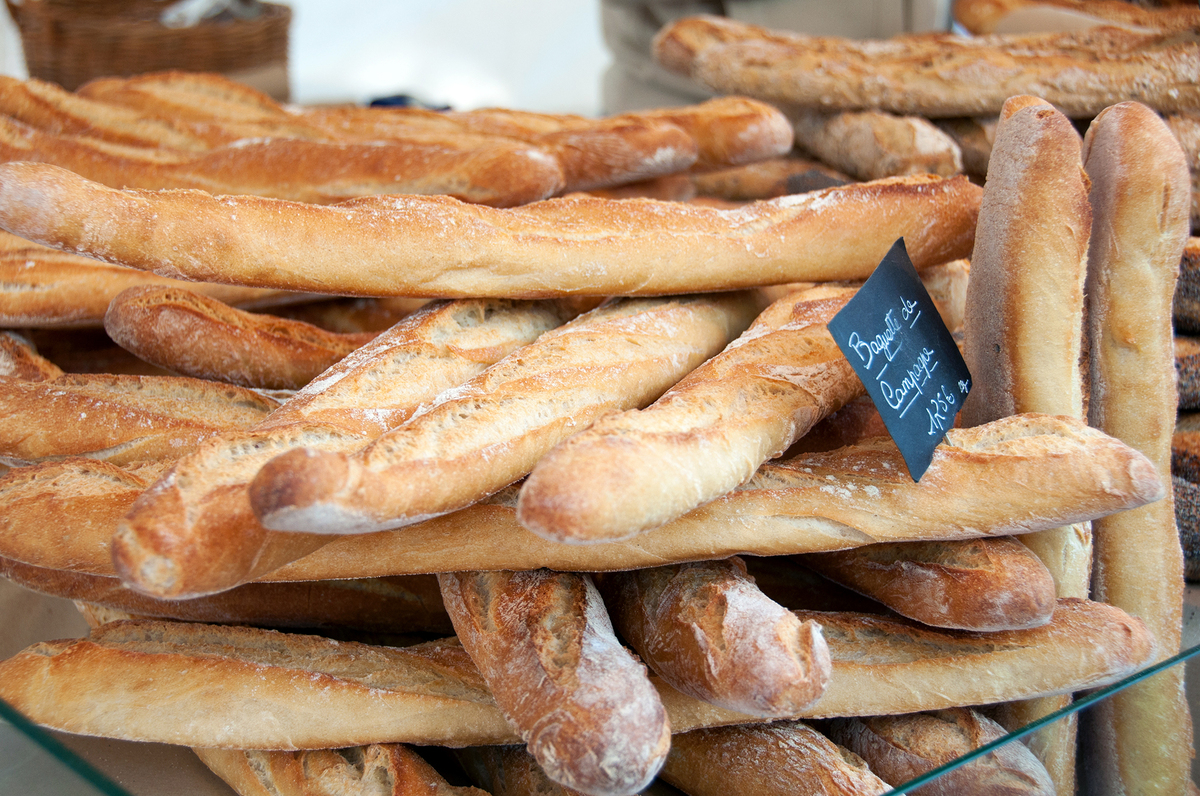 Baguettes on sale at the Edgar Quinet market in Paris.

In a bid to cut down on bureaucracy, the mayor of Paris has scrapped an arcane law that required bakers to inform city hall anytime they wanted to close up shop.

When the measure was passed by the Assemblee Nationale, or French parliament, in 1790, lawmakers wanted to make sure certain situations never repeated themselves. A long-term bread shortage, for example, was one of the factors that led to the 1789 French revolution, according to Stephanie Paul, a historian and Paris tour guide.

"We have to understand that for the poor people in the 18th century, bread was their main staple of food," Paul says. "In 1775, bread is so short that people around France are attacking not only boulangeries and mills, but also farmers themselves, trying to get more grain."

Because of the 225-year-old law, every July and August, when Parisians leave the city en masse, bakers have staggered their vacations so that every neighborhood is assured a supply of fresh-baked baguettes. 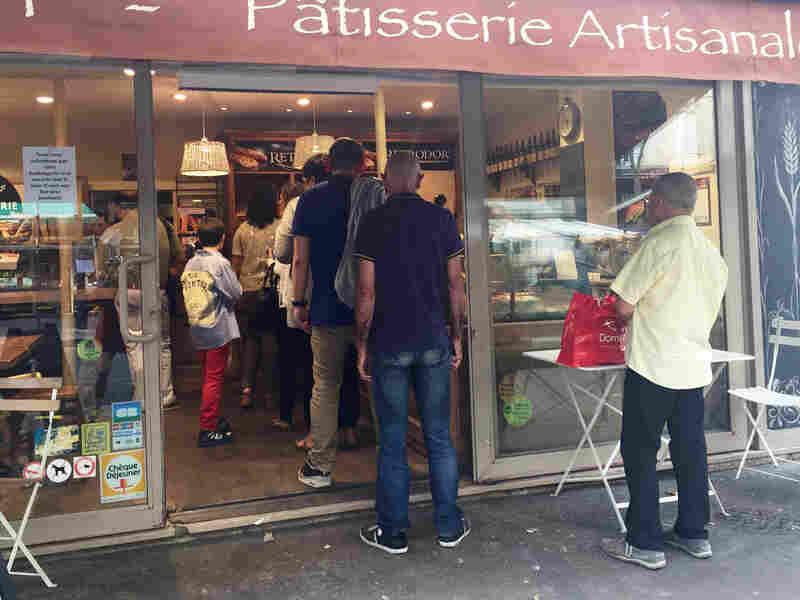 Outside one of the few open boulangeries in Paris. Eleanor Beardsley/NPR hide caption 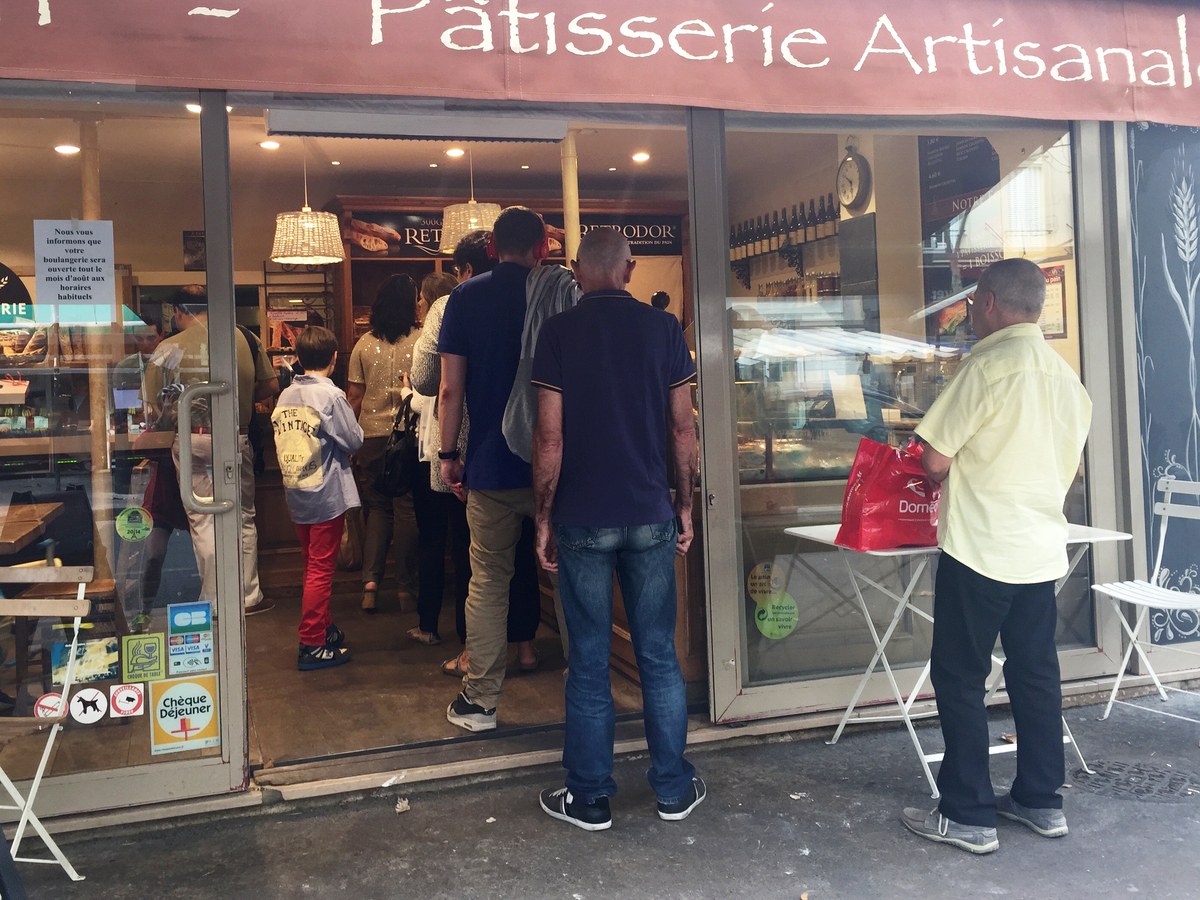 Outside one of the few open boulangeries in Paris.

But now that the law is no more, some fear allowing all the city's bakeries — or boulangeries — to be closed at once could deprive Parisians of a good baguette during the month of August.

Lucas Zelie, 23, is one of them. He walks through Saint Germain with his dinner and breakfast baguette tucked tightly under his arm. Zelie says he didn't know about the law, but figured bakeries had some arrangement between each other in summer.

"In my neighborhood, there's two bakeries and one is open when the other is closed," he says.

Near the Eiffel Tower, boulangère, or breadmaker Sandra Kerzazi runs an artisanal bakery. She says that's exactly what bakers used to do — get together and decide who would cover July and who August. 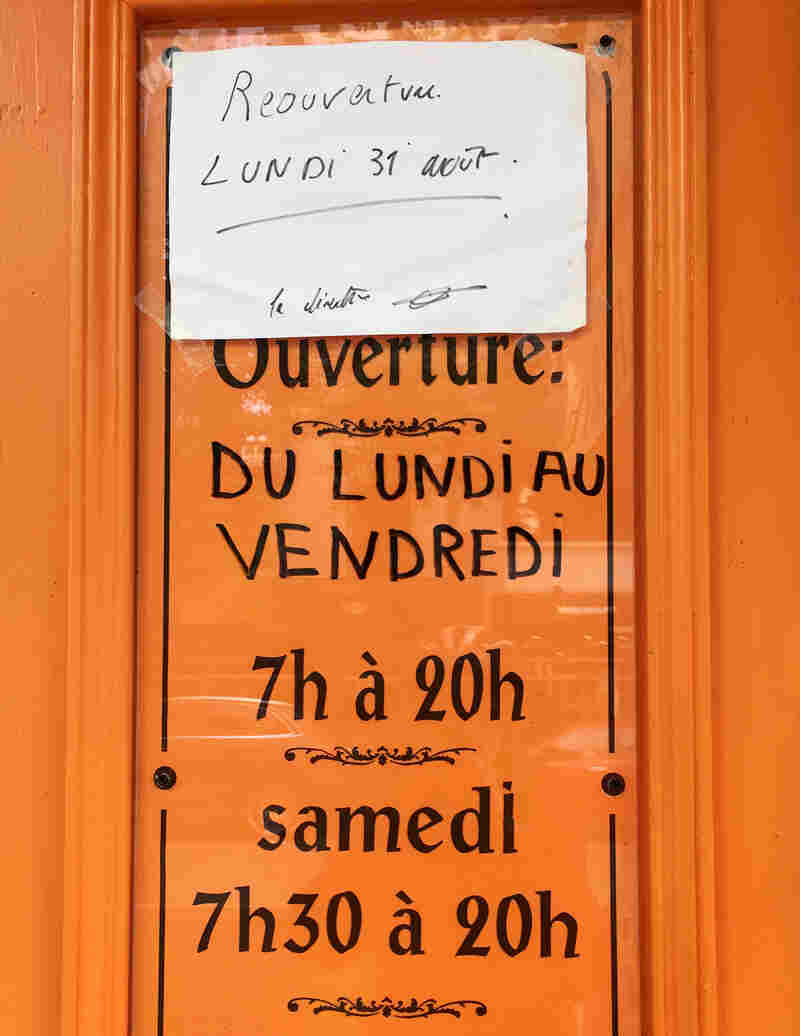 A paper sign taped to the door says that the establishment will reopen on Aug. 31. Eleanor Beardsley/NPR hide caption 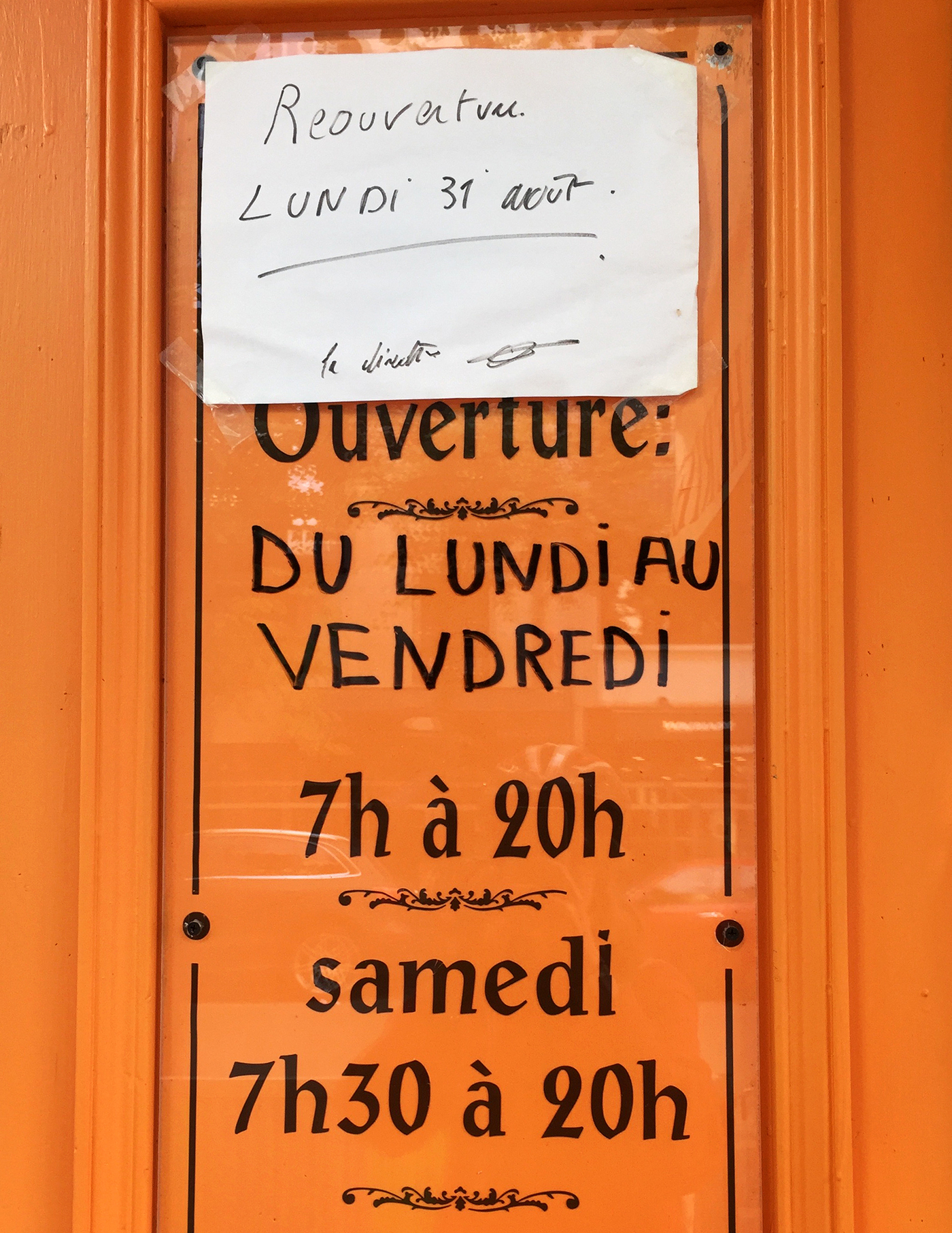 A paper sign taped to the door says that the establishment will reopen on Aug. 31.

But not anymore. Kerzazi says it was always hard to get a high-quality baguette in August, but this August it's particularly difficult.

The situation is worrying enough that Le Figaro newspaper assured its readers there would not be a penury of pain in the capital this summer. The head of the French bakers' union said the biggest threat was not a lack of baguettes but a lack of customers in summer.

"What you see here, this whole street, that's Paris in August," says Parisian Corinne Mellul, who pulls a grocery caddy past a series of shuttered stores. "Outside the tourist spots, it's totally empty."

Mellul says every Parisian who stays in the city in August is concerned about how far they'll have to walk for a decent baguette — and some other necessities.

"It's the same for cigarettes," she says with a laugh. "Even though I know that's not a sexy item."

Mellul says there are a lot more bakers in Paris than there are licensed tabbaconists, the only place you can buy cigarettes. And they also close in August.

"If you're a smoker, that can be a real, real problem in the middle of summer," she says.

Riding through my little neighborhood, I saw that all four boulangeries were closed — with little handwritten signs taped to the door saying: "We'll reopen August 31st." But upon closer inspection, one of the bakery's hand-scrawled signs said something else entirely. It turns out it was only closed for the evening, not for the month.

"You see, it's rare enough that they put up a sign," Mellul says. "They're going to stay open all of August and they're letting you know about it by putting up a sign because it's extraordinaire!"