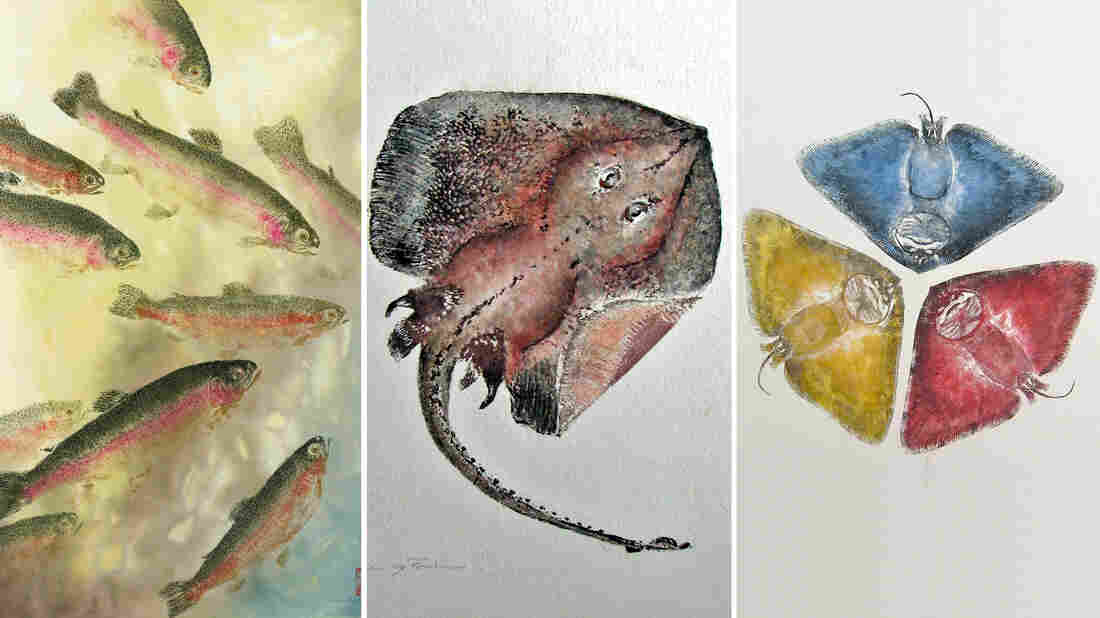 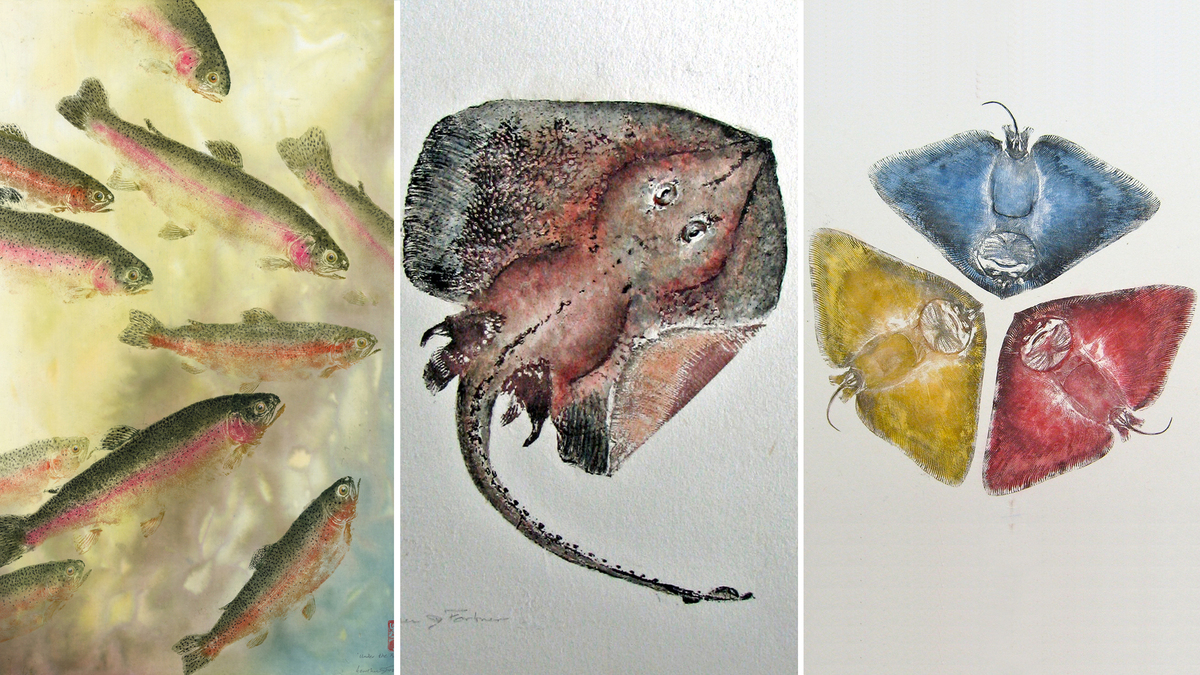 Fishing lore is full of tales about "the one that got away," and fishermen have been known to exaggerate the size of their catch. The bragging problem is apparently so bad, Texas even has a law on the books that makes lying about the size or provenance of a fish caught in a tournament an offense that could come with a felony charge.

But in 19th-century Japan, some enterprising fishermen found a foolproof way to record trophy catches. (Some versions of this origin story suggest they did so at the emperor's behest.) The method was known as gyotaku, or "fish rubbing," and allowed fishermen to print inked fish onto paper — creating a permanent record of their size. They used a nontoxic sumi-e ink, a black ink traditionally used in both writing and painting which could be easily washed off. Once the print was made, the fish was either released, if it was still alive, or sold at market.

At first, these prints were rudimentary, but they soon became works of art. Fishermen began adding details like eyes (which don't show up in a print) and enhancing other parts of the image. Over time, gyotaku became an established art form with two printing methods: direct and indirect.

Gyotaku artist Heather Fortner explains that in direct printing, the ink is placed directly onto the fish, using it almost like a stamp on the page. Indirect printing is the "finer art form," she says: The paper is glued to the fish and ink is tamped gently onto the page, "like a gravestone rubbing."

Another artist, Derek Wada, spends up to a full day working on the base prints for his gyotaku. "It's hard, because you're trying to put a 3-D art onto a 2-D medium," he says. "You have to make up the shape and silhouette of the fish by pressing." If the fish was speared, the gyotaku will have a hole on the page. Likewise with ripped fins, scars, or any other flaws.

From there, artists may add color (if they didn't include it in the original pressing), draw the eyes, and any other finishing touches. "You can get a really good print, but it's ruined if you don't have a good eye," Wada says.

Some gyotaku artists, like Japanese fishermen of yore, do eat the fish when their printing is over, but many don't.

"The fish needs to be room temperature or the ink will condensate," Wada says. "I use acrylic ink or paint, and depending on the color, it might have cadmium and other toxic chemicals." Between the threat of food or heavy-metals poisoning, many artists simply refreeze the fish and print another day.

Today, a basic form of gyotaku is sometimes offered as an easy art and educational activity for children. "It introduces them to biology, art, and fish, all at the same time," Fortner says. Though a child may not be able to paint, they likely can press an ink-covered fish onto a piece of paper. 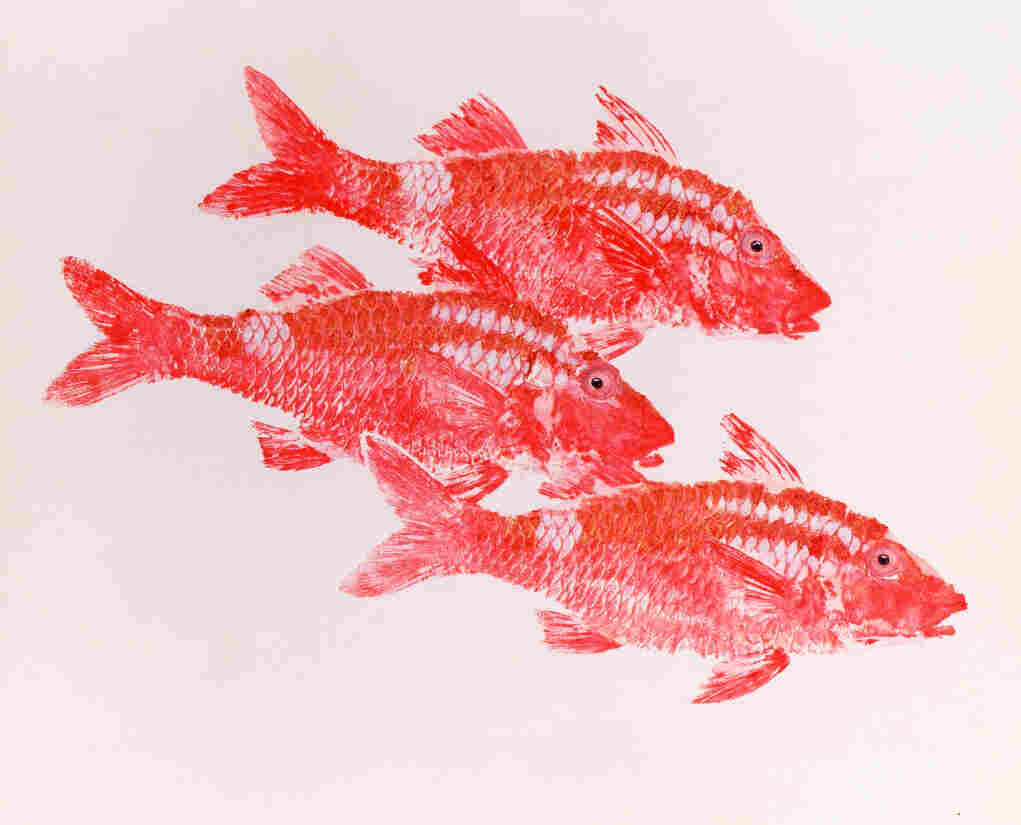 Kumu (sp. Parupeneus porphyreus). The Whitesaddle Goatfish has a special place in Hawaiian culture. In ancient Hawaii, the fish were used in offerings to the gods. Courtesy of Derek Yoshinori Wada hide caption

And many fishermen still use gyotaku as a record of their catch, keeping the origins of the art form alive.

Fish printing often attracts those who have a connection with the ocean or marine life. Wada, who is Japanese-American, grew up in Hawaii and was taught how to fish by his family at a young age. And before she became a gyotaku artist, Fortner was a commercial fisherman, research vessel deckhand, and a ship's officer and Master in the U.S. Merchant Marine. "I have always loved the ocean and anything from the ocean," she says.

She adds: "Gyotaku allows you to express an appreciation for the natural world by partnering with the finest artist in the world: Mother Nature."