Accessibility links
Are Women Better Tasters Than Men? : The Salt Many in the wine and beer industry claim women have a keener sense of smell, and thus taste, than men have. Sensory scientists who've tackled this question say there's something to this. 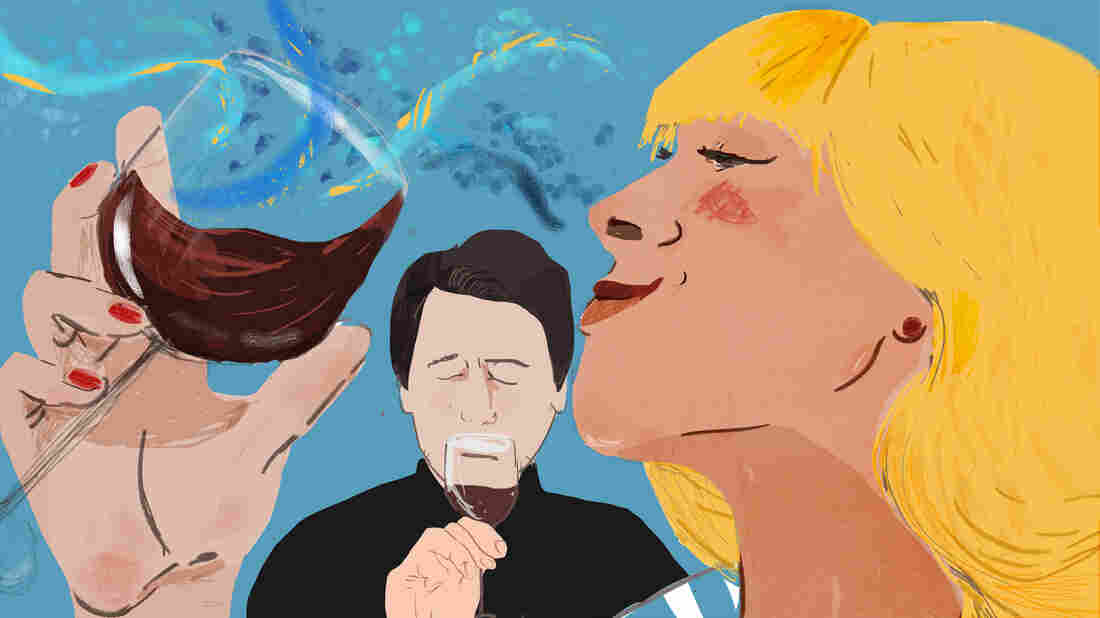 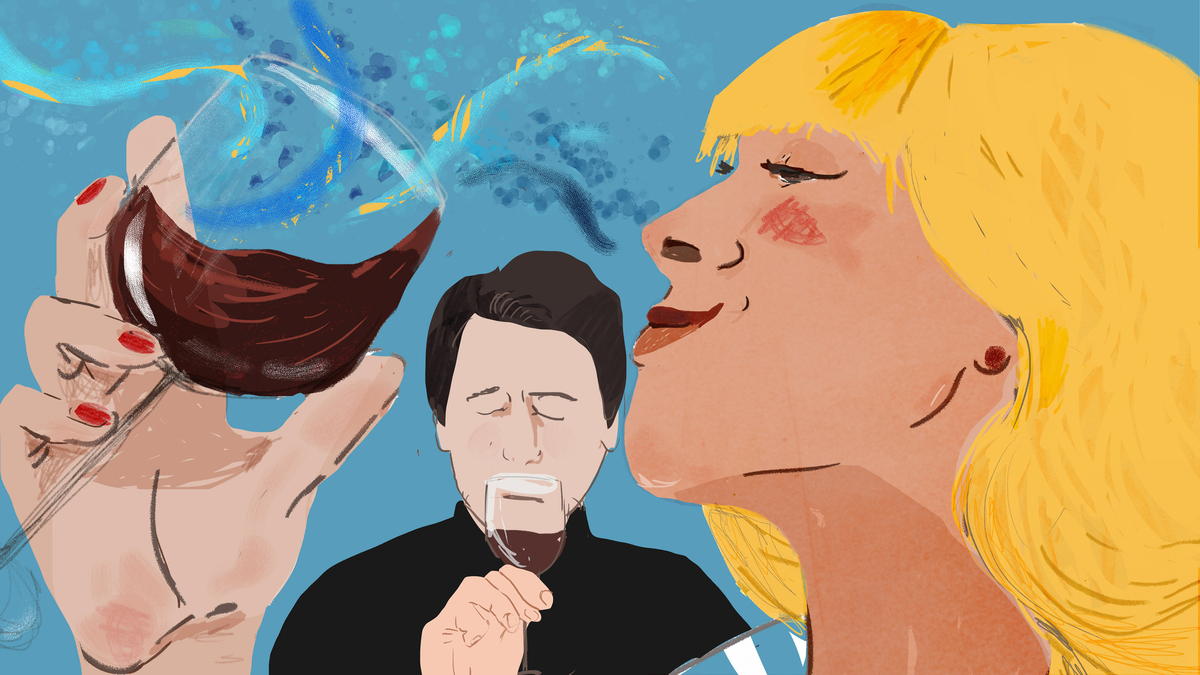 "Probably females are better at accessing olfactory memories, but I don't know why," says Robert Bath, a wine and beverage studies professor at the Culinary Institute of America in Napa Valley. "Maybe men don't pay as much attention?"

If, like me, you're an amateur taster of beer and wine, inevitably you've asked yourself why you don't taste that hint of raspberry or note of pine bark that someone else says is there.

Genetics certainly have something to do with why we have different perceptions of tastes. Scientists have shown there's a genetic component to how we experience bitter and sweet flavors, as we've reported. And "supertasters," who seem to be born rather than made, are said to experience a lot of tastes more intensely.

But what if your ability to perceive nuances of flavor is related to something as simple as your gender?

Turns out that, anecdotally, this is something people in the beer and wine worlds discuss all the time.

I first heard it from Douglas Constantiner in June at a beer-and-food-pairing event in Washington, D.C., hosted by the Brewers Association. Constantiner is a co-founder of Societe Brewing Co. in San Diego. I was sipping Societe's IPA, The Pupil, when Julia Herz, the association's craft beer director, mentioned genetic predisposition and taste. That prompted Constantiner to boldly state, "Women are predisposed to have a better sense of taste and smell than men."

Really? I said, as I swirled the remaining inch of beer in my glass, sniffing again for notes of mango and guava that I couldn't quite identify.

Yes, he said, science says so.

He went on: "I see that women need a lot less training to get to the same level of tasting as men. Like my wife and [my co-founder Travis Smith's] wife — they can pick up stuff naturally. I'm like, 'I've been doing this for eight years, training — not just making beer and drinking it, but training" — and meanwhile, his and Smith's wives readily picked up on lots of aromas in the beer.

Weeks later, Constantiner's comment lingered in my mind. Could it be true?

For such burning questions of sensory science, I turned to the Monell Chemical Senses Center.

Sure enough, researchers there have tried to get at gender differences in the sense of smell — which, of course, has implications for sense of taste: A lot of our experience of food and drink actually happens through our nose.

Paul Breslin, a member of the center and a professor at Rutgers University, studies the genetic basis of human oral perception.

Back in 2002, Breslin and a couple of colleagues got interested in the phenomenon of how some individuals can become increasingly sensitive to certain odors over time, detecting them at lower and lower concentrations. Earlier studies had suggested there is a gender component to this phenomenon, and Breslin and his colleagues wanted to look into it further.

They trained a group of men and women of various ages to identify two specific odors. The researchers then had both the men and the women smell the odors at increasingly diluted concentrations. And they found something quite interesting, as they reported in a paper published in Nature Neuroscience in 2002: The women who were of reproductive age saw their sensitivity to one of the odors increase by an average of five orders of magnitude.

Crazy, right? "It was such a bizarre observation," Breslin says. So bizarre they decided to try to replicate the results.

For a second study, which appeared in the journal Chemical Senses in 2005, the researchers ran more experiments: They trained men and women to detect more odors. And they tested post-menopausal women and age-matched men, as well as prepubescent boys and girls.

And again they found that only women of reproductive age were able to detect multiple odors at increasingly lower concentrations over time.

So what gives? Breslin says sex hormones present in reproductive women must have something to do with this. The experiments also suggest that hormones and attention are working together, he says: "It's not that women are super sensitive to everything — it's that women are a little better when they focus their attention on a smell."

The findings may help explain why women are more likely than men to develop chemical intolerance syndromes — when you notice and become irritated by odors present at very low levels.

But why might reproductive-age women have this higher level of sensitivity? One can imagine that it could be useful for a mother to be able to detect contaminated food, or traces of toxins, to protect her children.

But Breslin says he thinks it's something else: Women might have a greater need to be able to recognize and bond with their kin through smell. "If you're a social animal, you have to know which kin is yours. It's been shown that mothers can pick out their baby's smell from a big group," he says.

He says it's highly plausible that this ability to be more sensitive to smell could carry over into perception of food, wine and beer, though neither he nor anyone else has ever published research on it.

Why Can We Taste Bitter Flavors? Turns Out, It's Still A Mystery

That said, Linda Bartoshuk, a professor at the University of Florida Center for Smell and Taste, has found that supertasting abilities are more common in women than in men. She tells The Salt it's hard to come up with a good estimate. But in one study of 4,000 Americans, she found that 34 percent of them were supertasting women; by comparison, supertasting men were 22 percent of the study population.

Julia Herz of the Brewers Association confirmed to me that many in the beer world posit that women are better tasters. But what about the wine world? I wanted to know what the people who train both men and women to taste wine had to say on the matter.

Christie Dufault, an associate professor of wine and beer studies at the Culinary Institute of America in Napa Valley, Calif., has taught thousands of students how to taste wine over the years. Dufault and many other wine instructors use the Systematic Approach to Tasting, a rigorous training program for professionals that involves a lot of blind tastings.

When I asked her if she'd observed differences in how men and women learn to taste wine, her answer was surprisingly decisive.

"The women pick it up faster, learn it faster, then ultimately, they have a faster sensory recollection. And that gives them more confidence, especially in blind-tasting scenarios," Dufault says.

It's not that the men can't or don't learn how to taste, she says. "Ultimately, they all get it in time. With practice, practice, we see lots of improvement in everyone."

But Dufault says in addition to learning faster, women also may have an advantage in noticing when a wine is off. "If there's excessive oxidation or Brettanomyces [a yeast that can ruin wine], women pick up those flaws much more quickly" just by smelling it, she says.

Dufault isn't the only one at CIA who's observed this. Her colleague, Robert Bath, a wine and beverage studies professor, says he's also seen women, over time, consistently develop a stronger ability to identify characteristics in wine: "I've seen [women outperforming men] enough times to know it's there," he says. "Probably females are better at accessing olfactory memories, but I don't know why. Maybe men don't pay as much attention?"

On the flip side, Bath says, women often don't feel as confident about their acquired skills. "Men use confidence in lieu of ability," he says.

This helps explain why only about 20 percent of sommeliers today are women. But, he says, the atmosphere and industry are changing. "Traditionally, the sommelier profession was very male-dominated, and even snobbish. The modern one is more empowering, enthusiastic and [focused on] sharing information about wine, which makes it more attractive to anybody."

And ultimately, everybody can improve their ability to taste, says Herz of the Brewers Association. She thinks what's most important is "the mind-palate connection. How mentally dialed in are you to what your palate might perceive? The more aware and less biased [you are], the more you will notice and sense the whole picture of flavor."

Female or male, "if I have heightened awareness of what I'm being exposed to, then I'm apt to observe it more deeply and effectively," says Herz.

Even Doug Constantiner, the brewer who claimed his wife was a more natural taster than he is, admitted it's mostly about training.

Which also explains why I, a reproductive-age woman, couldn't taste the mango and guava in his beer. I simply haven't trained enough. Maybe I'll start with this Slacker's Guide to Wine Tasting.