Accessibility links
Side Businesses Flourish Around Texas Barbecue Joint's 5-Hour Line : The Salt At Franklin Barbecue in Austin, Texas, people start lining up at 5 a.m. to get a taste of world-famous brisket. The line has become such a fixture that it's become a business opportunity for locals. 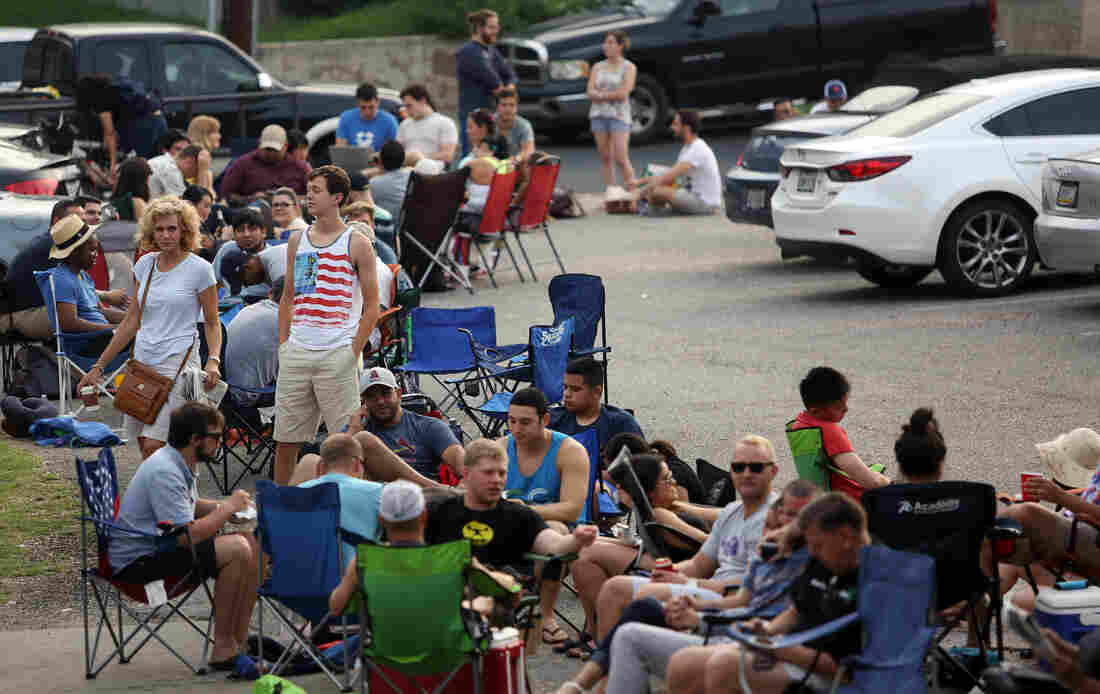 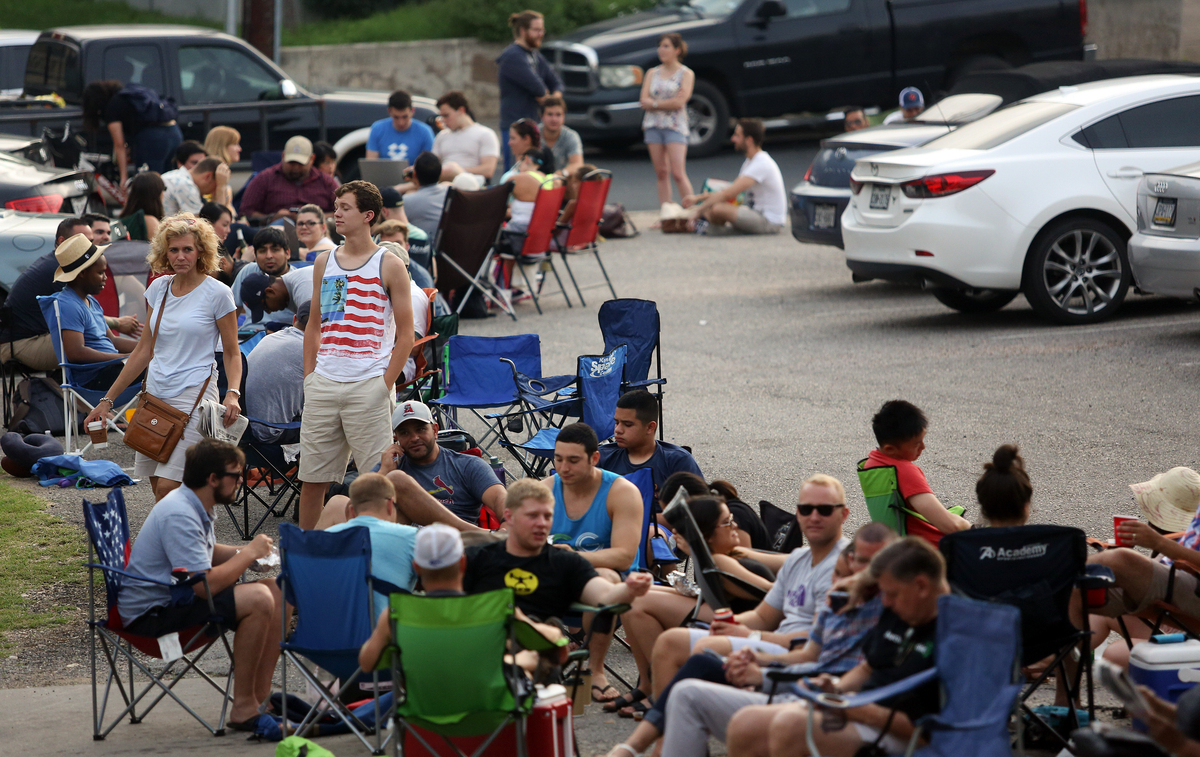 Line-sitters waited for hours outside Franklin Barbecue in Austin, Texas, on July 3.

Texas has a barbecue joint known as much for the line of people waiting outside as for its tender brisket.

At Franklin Barbecue in Austin, people start lining up around 5 a.m., waiting six hours, chatting with others in line until the restaurant opens at 11 a.m.

This barbecue place is such a big deal that entrepreneurs like Desmond Roldan are cashing in on its fans.

This 13-year-old is the face of BBQ Fast Pass, a line-sitting service he founded to serve the people who'd rather pay than wait. Roldan waits for hours on their behalf. But he doesn't eat any of the meat.

Roldan says he's hired by hedge fund managers who want to impress a client, or tourists.

"The people I wait for ... they're from New York," Roldan says. "They wanna have [the barbecue] and they don't have the time for [waiting]."

Robin Staab from Bartlesville, Okla., however, decided to make the time for it on a Sunday this summer. She got to the line around 7 a.m. with a plan for how to wait: "talk with the others in line, meet new people, read my iPhone, read the paper, drink coffee," she says. 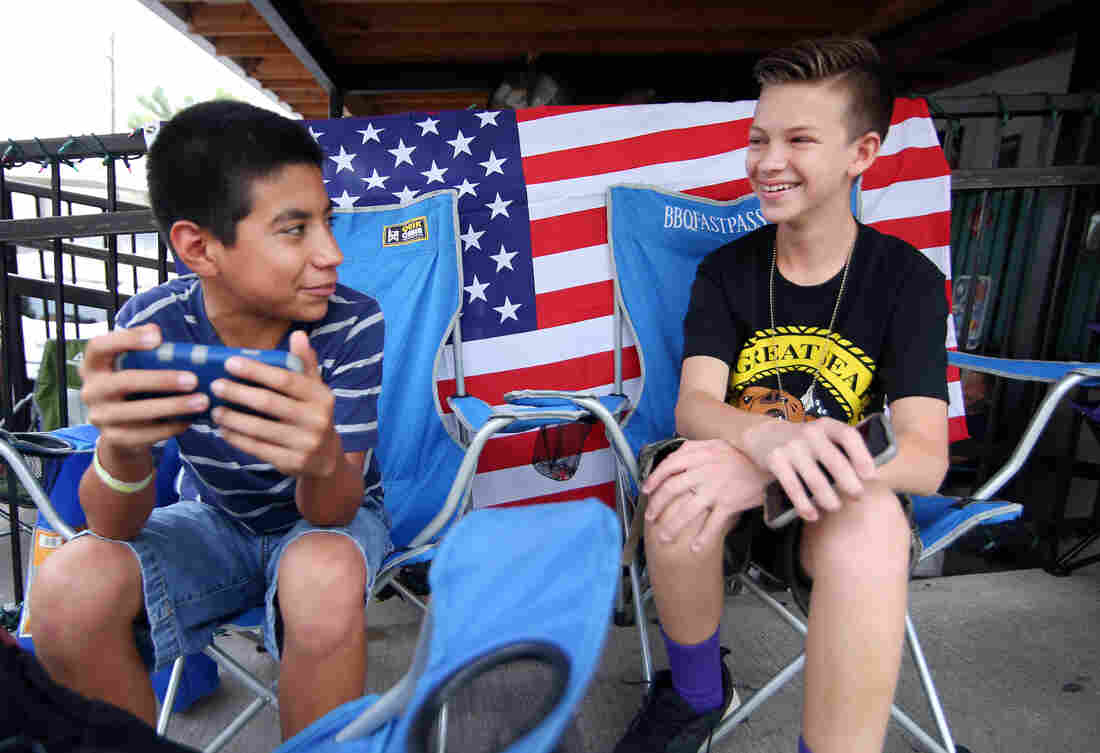 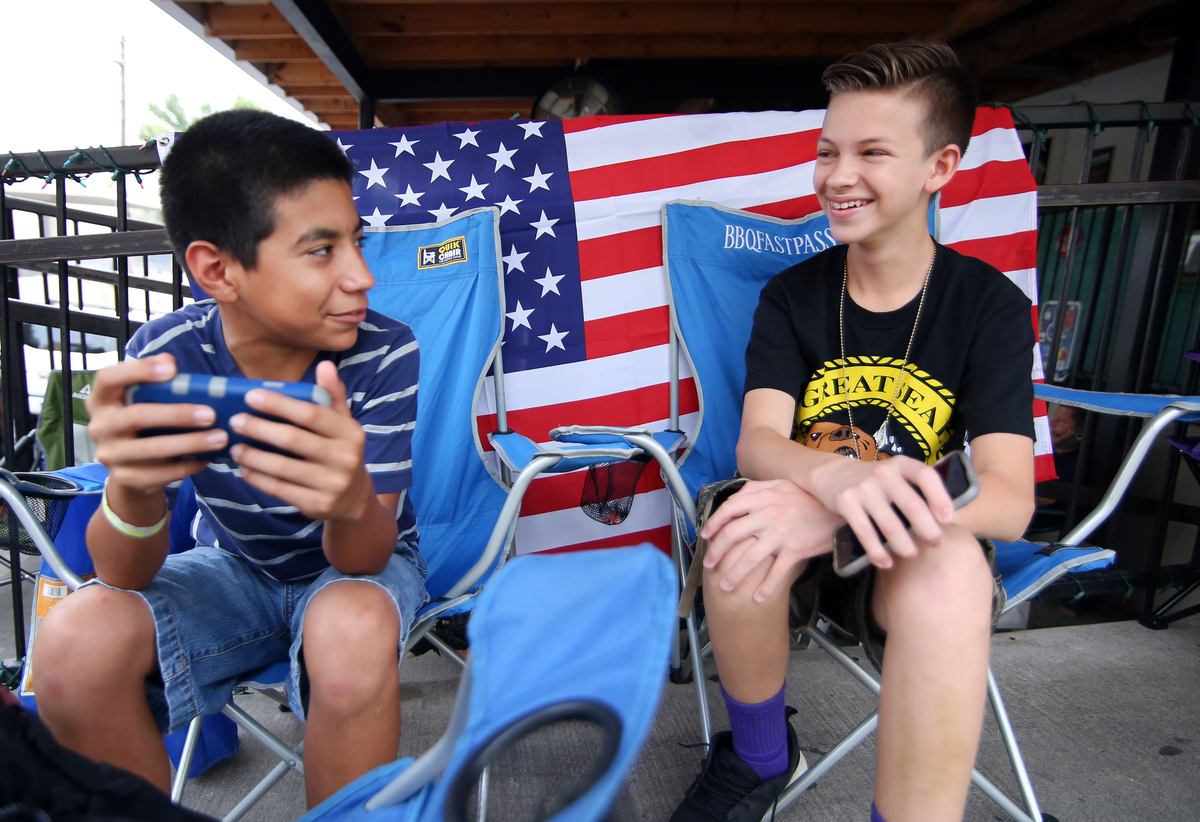 Desmond Roldan (right) is the 13-year-old behind BBQ Fast Pass, the line-sitting service. He's seen here with his friend Jiovani Acosta on July 3.

Drinking coffee is especially easy since you can find an espresso machine on Franklin's side yard. It's another venture that's cropped up to serve the line-sitters.

"My sweetheart and I own Legend Coffee Co. right next to Franklin Barbecue," says Annie Welbes, who started selling coffee in January. Her trailer is open the same days as Franklin, during the prime barbecue line hours.

"It was always in the back of my mind that this would be a really amazing place to start a business," she adds. Each day, Welbes gets business from about a quarter of the people waiting, people who hail from all over the U.S. and the world.

Back at the line, Benjamin Jacob, Franklin's general manager, is strolling and asking customers if they're doing all right as they wait. 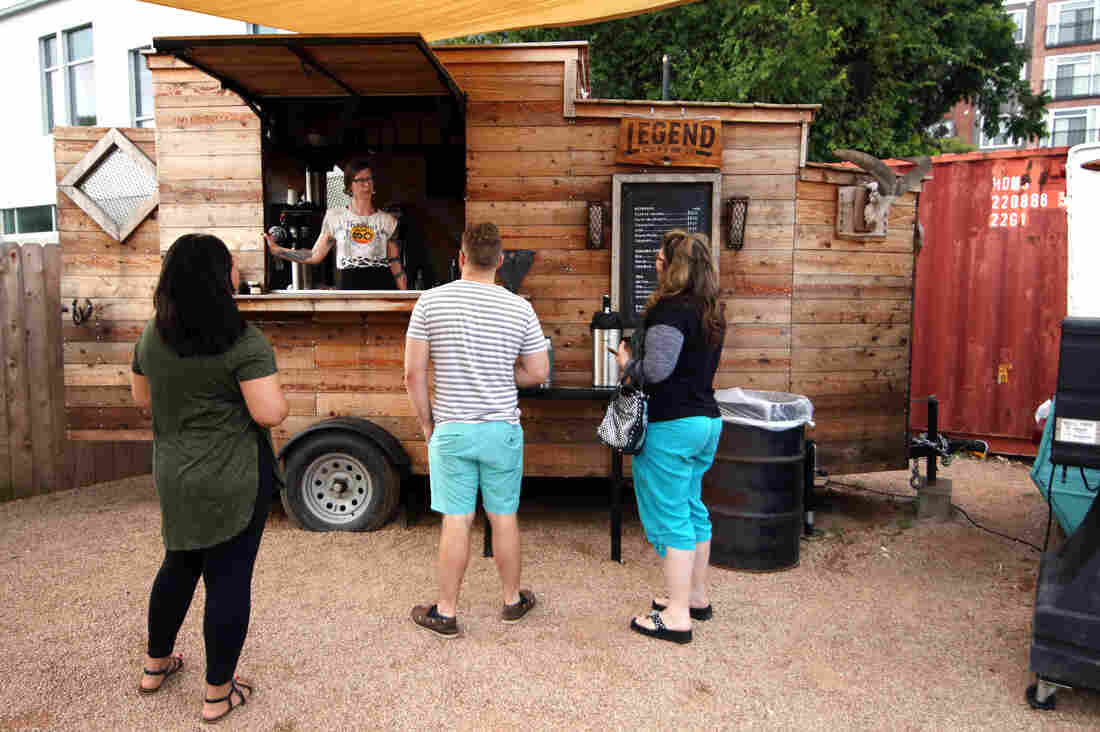 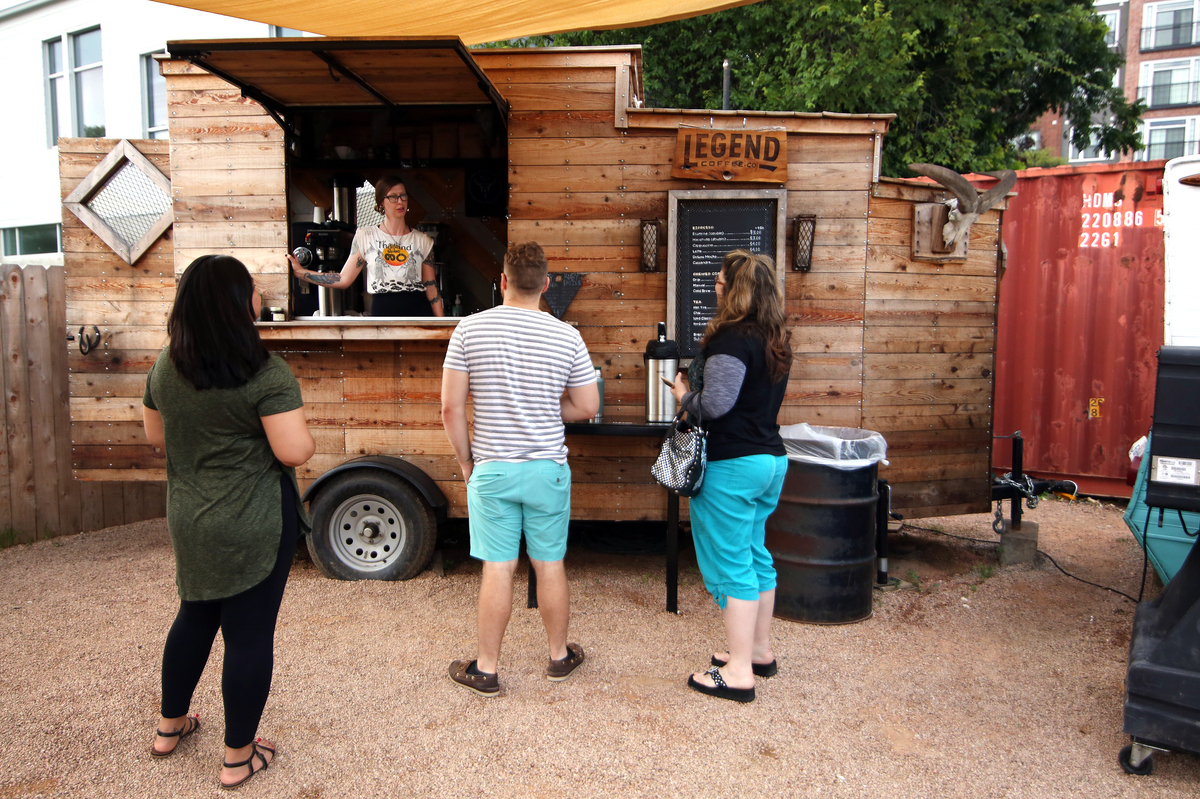 Annie Welbes serves customers at her Legend Coffee Co. next to Franklin Barbecue.

"You guys all know what's going on? How long you're waiting already? Somebody talked to y'all, all about that?" he says to a group halfway down the line. "I'm gonna throw a really crazy number at you: 2 o'clock."

At this point, it's about 9 a.m., and already some 100 people are in line for a meal they won't get to eat for an average of five hours.

"It's a crazy thing," Jacob says. "It shocks us every day, this line. We're still shocked by it."

Over that time, more people have come around to make money off barbecue fans. 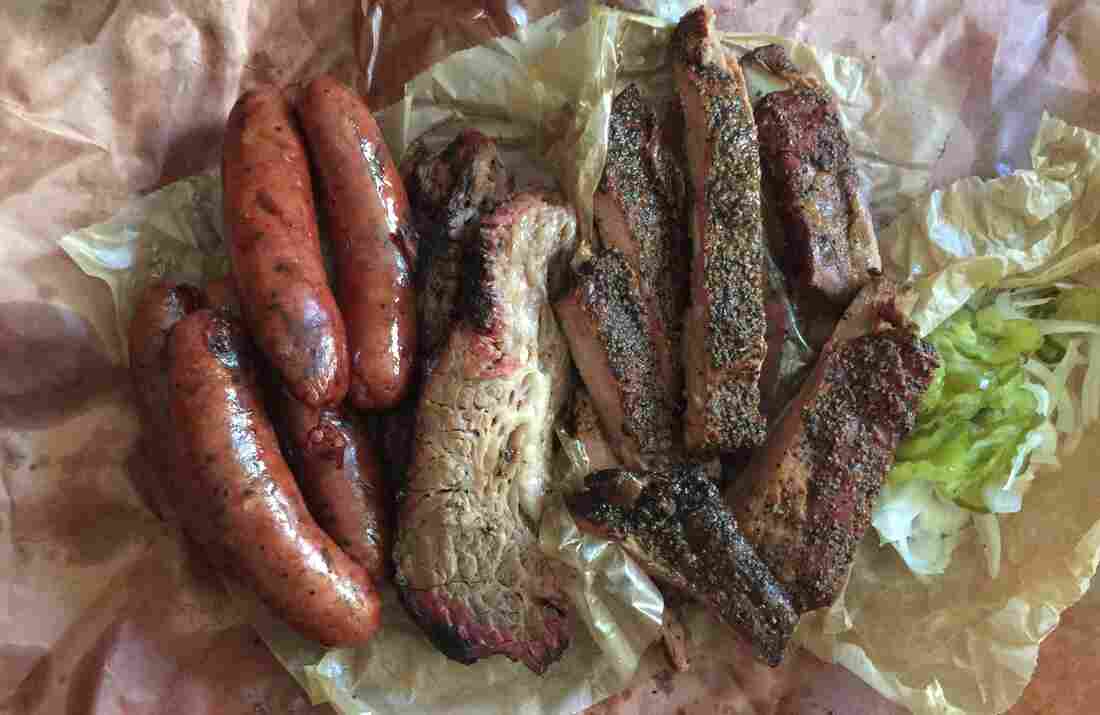 What the fuss is all about: an order of sausage, brisket and ribs at Franklin Barbecue A Vandalay/Flickr hide caption 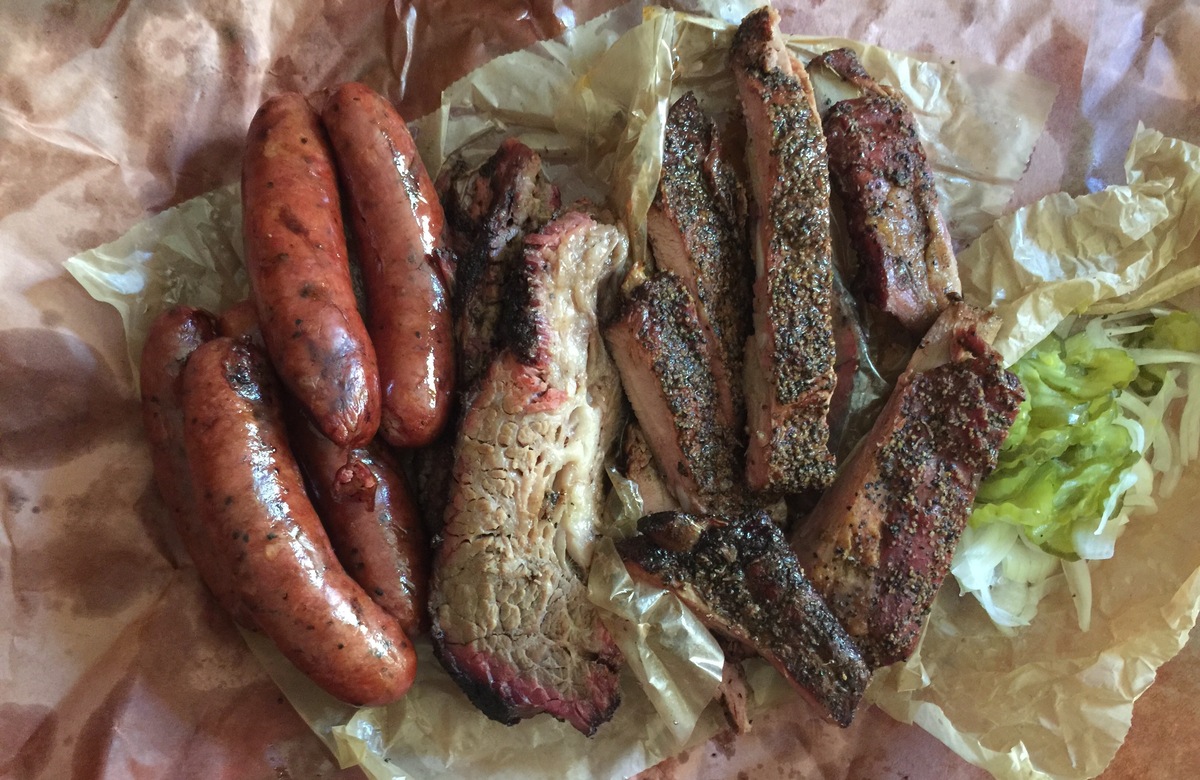 What the fuss is all about: an order of sausage, brisket and ribs at Franklin Barbecue

"The chair guy was one of the first guys," Jacob says about one of the first entrepreneurs, Derek Kipe. "He sat up on the corner here on 11th Street and he had like 200 chairs basically that he would rent for $5 a pop."

The chair guy's no longer around. These days you can find Eddie James, who helps people find parking and also cleans windshields. That service started earlier this year when a woman called him over to her car for help.

"I went over there and I saw it was some bird poop on the roof of her car all the way down the driver's side door, and it had dried," he recalls. "So I cleaned it and she gave me 10 bucks."

James takes whatever people can spare. He sometimes makes $50 a day.

Roldan of BBQ Fast Pass has a pricing system, though. It's based on the day of the week and the size of the order. He charges up to $150. Now that school has started, Roldan works only on weekends. His father helps him deliver barbecue for people who pay him to stand in line and bring them the food — a service that's an extra $20.

Often, Roldan's clients come switch out with him in the line, just before the clock strikes 11 a.m. When Franklin finally opens, you can hear the line waiters closest to the door cheer as they can start walking inside.