Accessibility links
Huge Fish Farm Planned Near San Diego Aims To Fix Seafood Imbalance : The Salt The aquaculture project would be the same size as New York's Central Park and produce 11 million pounds of yellowtail and white sea bass each year. But some people see it as an aquatic "factory farm." 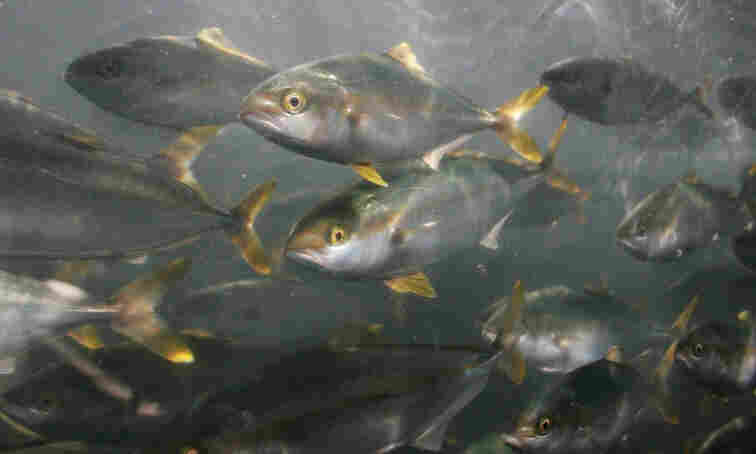 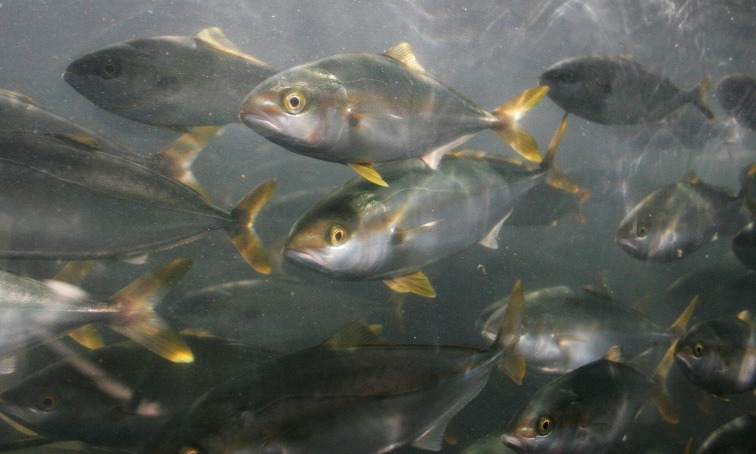 A school of wild yellowtail jack (Seriola lalandi). Rose Canyon Fisheries near San Diego would aim to raise 11 million pounds of yellowtail and seabass each year.

The largest fish farm in America could be built 4 miles off San Diego's coast.

Rose Canyon Fisheries could have a footprint on the ocean floor of 1.3 square miles, about the same size as New York's Central Park. The goal is to produce 11 million pounds of yellowtail and sea bass each year.

The Hubbs-SeaWorld Research Institute, the nonprofit research arm of SeaWorld, is partnering with a private investment firm to create the aquaculture project. Don Kent, the president and CEO of Hubbs-SeaWorld, says he wants to help correct what he calls a "seafood imbalance."

He's referring to the fact that 91 percent of America's seafood is imported, and countries like China that export a lot of fish are now keeping more for themselves.

"The price of seafood is going up higher and higher for people like us who have to import it," he says. "So the big advantage we have over those other supplies is from the fact that we can grow it locally."

Rose Canyon Fisheries is still applying for permits, so no farming has started yet. But Kent is already breeding yellowtail in his lab.

But the project's size and location are problems for Matt O'Malley, with the environmental group San Diego Coastkeeper.

"We're talking about putting a floating factory farm right off the coast of San Diego," he says.

To show that 4 miles is closer than it sounds, O'Malley takes me on a small boat to the spot where Rose Canyon Fisheries would be located. From there, I can clearly see houses on the shore.

"I mean, you just know that some of these people are going to be out here looking at this," O'Malley says.

But O'Malley says the problems don't end with beach homes' views. Marine mammals could get caught in the farm's nets and ropes and caged fish could become inbred and spread disease to the wild population, he says. Plus, he worries seals and sea lions would be attracted to all of those caged fish and get entangled in the nets and ropes.

Other critics say building the project is an awful lot of work when the U.S. already does produce some seafood, and doesn't eat it. Americans don't always like the fish native to our coasts, so we import from other countries, according to food journalist Paul Greenberg, author of American Catch.

"We tend to export stronger tasting things like mackerel, black cod, a lot of squid, and then we import things like shrimp, tilapia, neutral-tasting things that you can kind of deep fry and use in the American-palate-friendly sandwich," he says.

Aquaculture can help correct this imbalance. But "rather than trying to start up new and complicated ventures, first off let's try to eat the fish we've already got," Greenberg says.

As Kent with Hubbs-SeaWorld sees it, though, aquaculture solves more global problems than Americans not liking fishy fish.

One way to do that is through aquaculture, he says.