Accessibility links
Why Freezing Didn't Keep Sushi Tuna Safe From Salmonella : The Salt Freezing is usually considered a way to make raw fish safer. But a recent outbreak of Salmonella in frozen, raw tuna used in sushi across the U.S. highlights the limits of the food-safety technique. 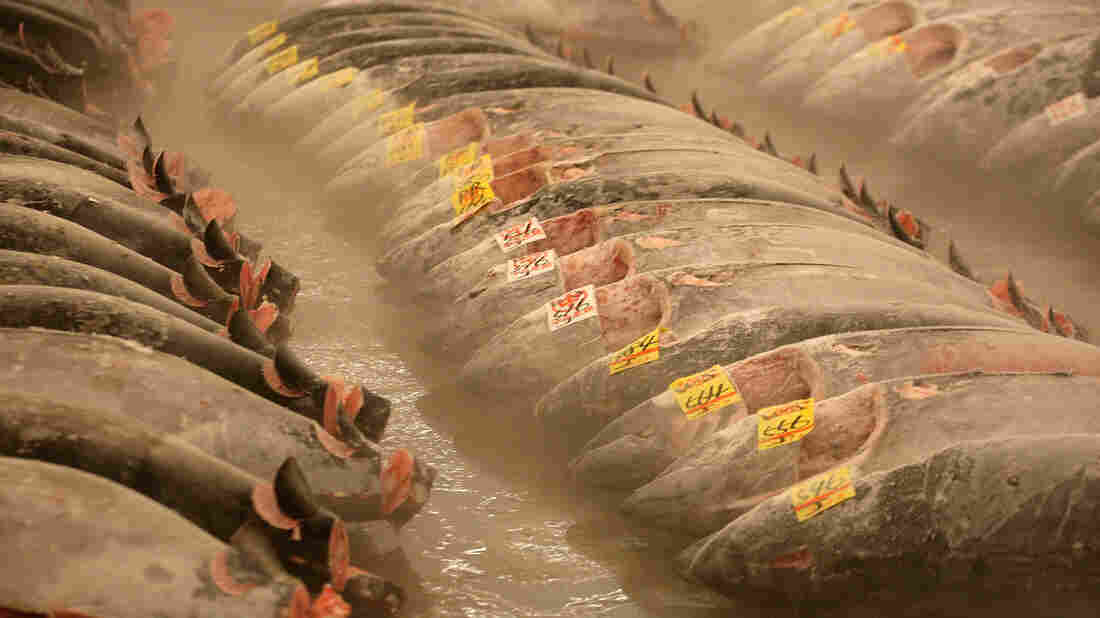 Frozen tuna lies on the ground at the Tsukiji fish market in Tokyo. The FDA recommends freezing raw fish before serving it in sushi as a way to keep it free of parasites. But as a recent outbreak of Salmonella in the U.S. highlights, freezing doesn't guarantee that raw sushi fish is pathogen-free. Koichi Kamoshida/Getty Images hide caption 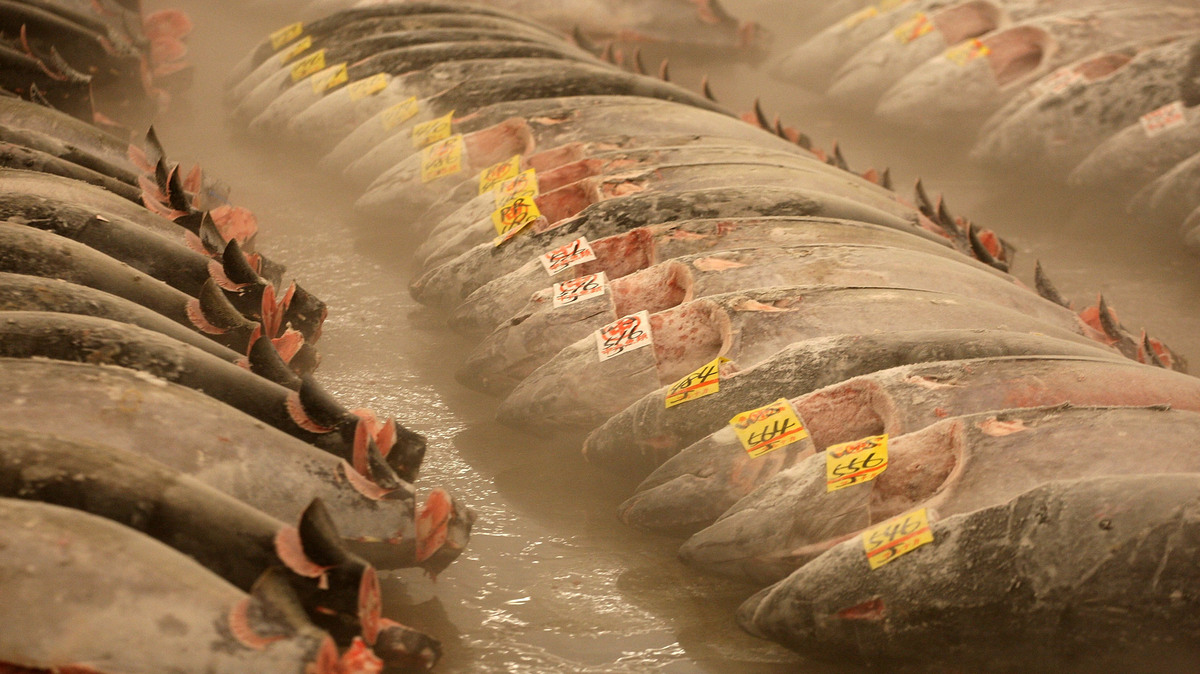 Frozen tuna lies on the ground at the Tsukiji fish market in Tokyo. The FDA recommends freezing raw fish before serving it in sushi as a way to keep it free of parasites. But as a recent outbreak of Salmonella in the U.S. highlights, freezing doesn't guarantee that raw sushi fish is pathogen-free.

A recent outbreak of Salmonella in frozen tuna might have sushi lovers wondering if it's safe to eat that raw fish.

The outbreak in question began in California in March. All told, it sickened 65 people in 11 states. There were 35 cases in California, with another 18 in Arizona and New Mexico. The rest of the cases were scattered across the country, including four in Minnesota.

Most of the victims interviewed by public health investigators said they'd eaten sushi made with raw tuna in the week before they became ill. It was the Minnesota Department of Health that discovered the outbreak strains of Salmonella in some frozen raw tuna imported from Indonesia. The California importer, Osamu Corp., had shipped the frozen tuna to sushi restaurants and grocery stores that make sushi throughout the U.S.

In late August, the Centers for Disease Control and Prevention announced that the outbreak was over. But the agency warned that some of the recalled tuna might still be lurking in the freezers of restaurants uninformed about the outbreak, so people could still get sick.

It's not unheard of for Salmonella to contaminate raw tuna. The pathogen strain linked to this year's outbreak has been linked to raw tuna before. And in 2012, another strain of Salmonella linked to frozen, pre-packaged raw tuna sickened 425 people.

"We knew it could be a possible vehicle," says CDC epidemiologist Matthew Wise.

But Salmonella is a bacteria that lives in the intestines of animals, particularly chickens. That's why outbreaks are so often associated with chickens — on a plate or at a petting zoo.

So if pathogens like Salmonella don't usually contaminate fish, what went wrong with the sushi tuna in this case? The FDA tells The Salt it doesn't know for sure. Maybe someone in the processing facility didn't wash their hands. Maybe the water or equipment used in processing was contaminated. Or maybe a bird or rodent got into the fish on the boat or during the ride to the processing facility. There are many opportunities for contamination to occur between capture and processing.

And the truth is, foodborne pathogens turn up in unexpected foods all the time. For example, another type of bacteria called Listeria is usually associated with foods like deli meats, sprouts and soft cheeses. But within the past year, Listeria outbreaks have been unexpectedly linked to caramel apples and ice cream.

Ironically, freezing is usually considered a way to make sushi safer, because it kills any parasitic worms living in the raw fish flesh. That's why last month, New York City began requiring sushi restaurants to freeze their fish before serving it. Many of the city's top sushi spots have been freezing their raw fish for this very reason for years.

The FDA Food Code, a model that states can use when creating their own food-safety legislation, lists the specific temperatures and lengths of time at which freezing can kill parasitic worms in raw or partially cooked fish.

But as this case highlights, freezing doesn't guarantee your sushi is pathogen-free. While freezing will slow down the growth of Salmonella, cooking or pasteurizing are the only ways to kill the bacteria.

And the CDC recommends that people at higher risk for serious foodborne illness — kids under 5, adults over 65, pregnant women and other people with weakened immune systems — shouldn't eat raw seafood, regardless of whether there's an outbreak happening.

"It's important to remember that cooking is an important way of killing bacteria," Wise says. "Any product, like raw fish, that has not undergone any type of kill step to destroy pathogens carries some additional risk to the consumer."

Lydia Zuraw is a journalist who covers food safety and food policy. She's based in Washington, D.C.