Accessibility links
Open Your Eyes To The Infinite Possibility Of The Tomato : The Salt How do you transform 100 pounds of 60 varieties of tomatoes into a seven-course meal? It may sound like a math problem, but it's more a creative journey into the infinite possibility of the tomato.

It's that time of year when some gardeners and tomato-coveting shoppers face a vexing question: What on earth am I going to do with all these tomatoes I grew (or bought)?

A select few up to their elbows in tomatoes may have an additional quandary: How am I going to prepare different kinds of tomatoes to honor their unique qualities?

Chef Jamie Simpson of the Culinary Vegetable Institute faced a particularly challenging version of this last week: 100 pounds of 60 different kinds of tomatoes to transform into a seven-course, tomatocentric dinner. Fortunately, it's Simpson's job to come up with creative solutions to such problems of abundance. And as Simpson deftly reminded us, the possibility of the tomato is pretty much infinite. 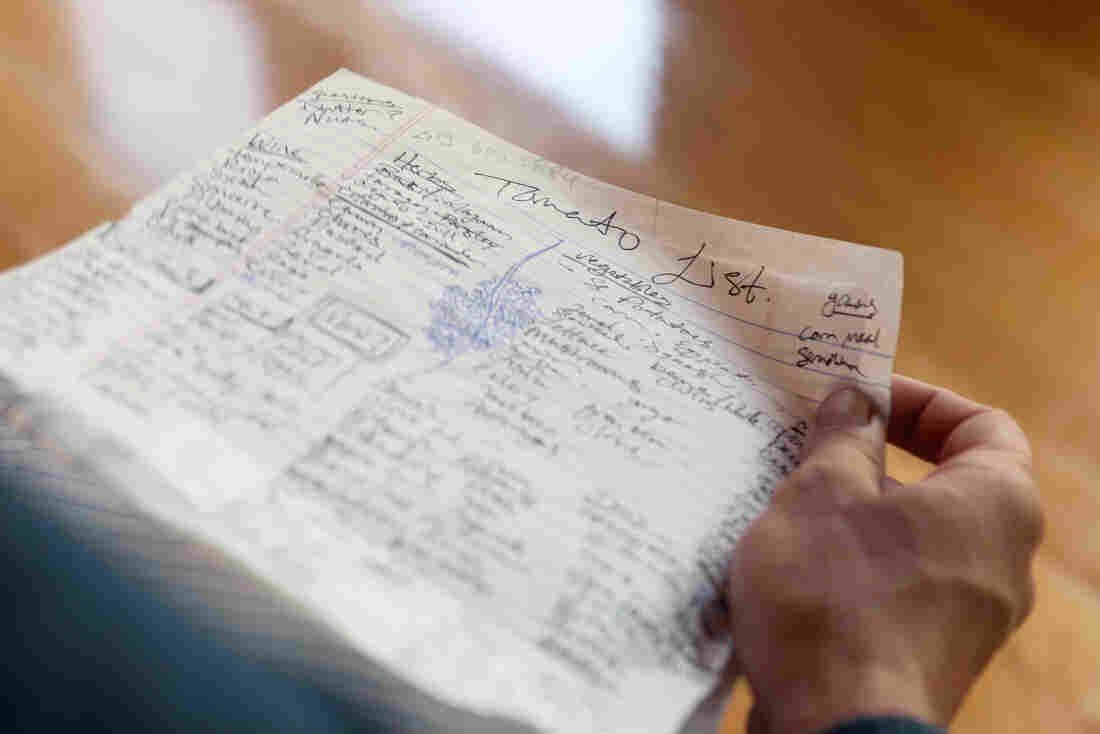 Chef Jamie Simpson and his team brainstormed a list of ideas for the tomato dinner, starting with the question, "What doesn't go with tomato?" Ryan Kellman/NPR hide caption 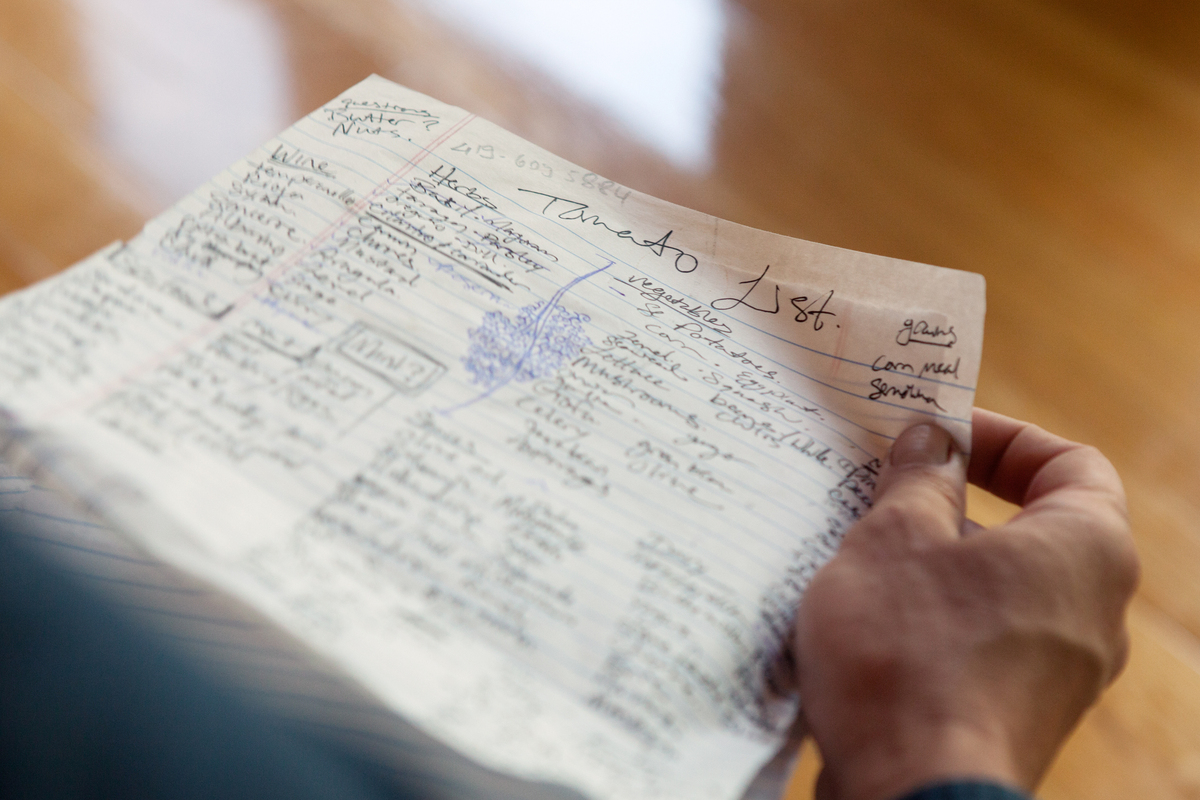 Chef Jamie Simpson and his team brainstormed a list of ideas for the tomato dinner, starting with the question, "What doesn't go with tomato?"

Simpson was tasked with planning and executing the dinner at the CVI in Milan, Ohio, drawing from a gorgeous selection of tomatoes provided by the Chef's Garden, a farm down the road in Huron, Ohio, which grows specialty vegetables for chefs.

Farmer Lee Jones, who runs Chef's Garden with his brother and father, tells The Salt they planted 106 varieties of tomatoes this year. Some are in trials and won't go to market. But a whopping 60 varieties of all different shapes, sizes, flavors and ages (from centuries-old heirlooms to brand new hybrids) are being harvested right now.

Most of the tomatoes grown at Chef's Garden are shipped daily to chefs around the U.S. and other countries, but a few of them make their way over to the CVI. The Jones family helped establish the institute 13 years ago as a playground for chefs to test out new vegetables grown on the farm and as an event space for seasonal dinners and workshops for the public. 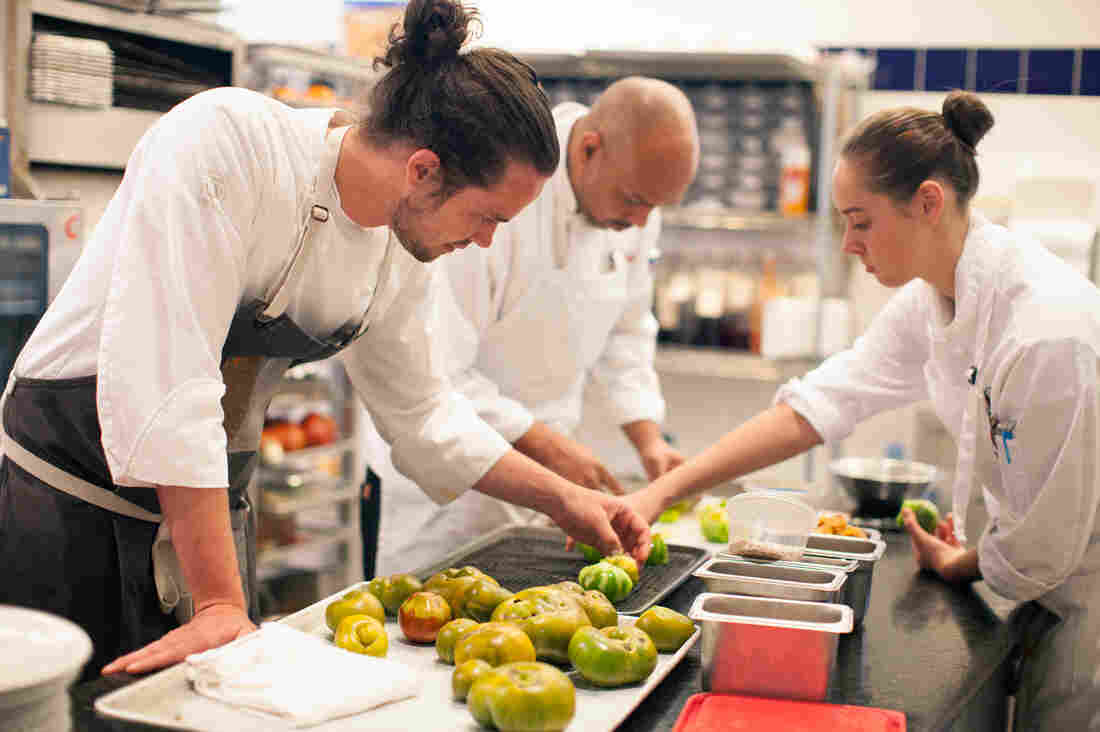 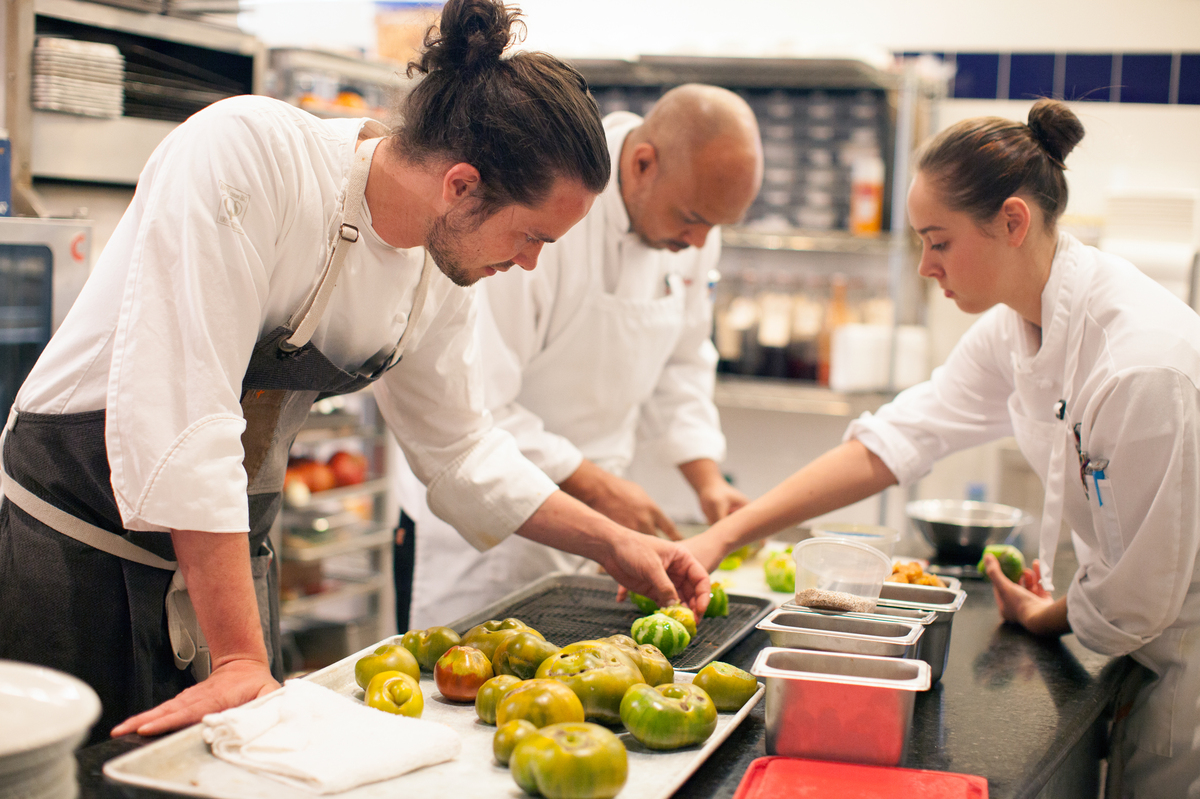 Chef Jamie Simpson and his team in the Culinary Vegetable Institute kitchen.

The CVI features a huge open kitchen, where Simpson spends his days tinkering on his own projects and assisting visiting chefs who come to experiment with the farm's vegetables for new dishes and menus.

Every few months, the CVI hosts a dinner focused on an ingredient in season. And then dozens and dozens of pounds of that ingredient end up on the loading dock behind the kitchen. Simpson transforms them into a multicourse meal using every cooking technique he can think of.

In August, as tomato season descended, Simpson brainstormed with his staff to figure out just how to do justice to his bounty. His first question to them: "What doesn't go with tomato?" Turns out that's a really hard question to answer. (If you, like me, thought chocolate, Simpson says you're wrong. Chocolate can go with tomato.)

For each course, Simpson says he thought hard about the "perfect tomato for the application." That's an especially daunting task with 60 tomatoes to choose from, including such exotics as the kiwi cherry berry and the pineapple tomatillo. (In the end he didn't use all 60, but rather a couple of dozen varieties.)

Rather than reinvent tomato cuisine, Simpson decided to focus on the classic ways that Americans eat the savory fruit — and then mix it up. The meal started with a Bloody Mary, except instead of tomato juice, we got tomato water, with whole, frozen cherry tomatoes instead of ice cubes to keep the drink cool.

Next, he served a single, perfectly rectangular french fry with a thin line of tomato ketchup on top. Other highlights from the meal included green tomatoes that had been pickled and then fried still on the vine, which was also edible and delightfully crunchy. They were served with dark green tomato leaves, which Simpson determined were perfectly safe to eat, despite the fact that the tomato is a member of the deadly nightshade family.

There was rigatoni and meatballs and tomato sauce, the rigatoni made, mostly, from extruded tomato. A tomato soup course came with a delicate layer of a Moroccan-style bread spread thin across the top of the bowl, with chunks of cheese baked in. The smooth tomato soup was poured through a hole in the bread.

Lastly, Simpson proved that tomatoes can make for a charming dessert: upside-down cornmeal tomato cake, served with mozzarella ice cream and basil jus — a nod to the Caprese salad.