Accessibility links
1,000 Years Ago, Caffeinated Drinks Had Native Americans Buzzing : The Salt People in the American Southwest and Mexican Northwest were drinking cacao and tea-like yaupon in places where neither grew. That suggests an extensive trade network to deliver a caffeine fix. 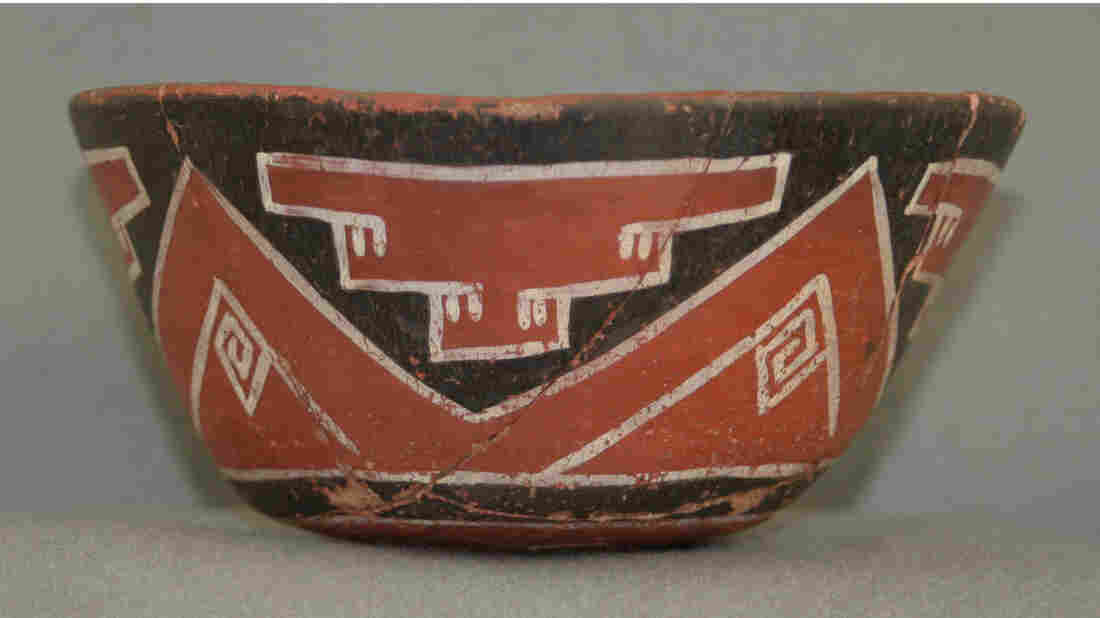 Make mine a venti: An example of a drinking vessel from the Grasshopper Pueblo archaeological site in central Arizona. Researchers tested shards of similar vessels found at various sites in the American Southwest and found evidence that people in the region were drinking caffeinated cacao and yaupon holly drinks 1,000 years back. Courtesy Patricia Crown hide caption 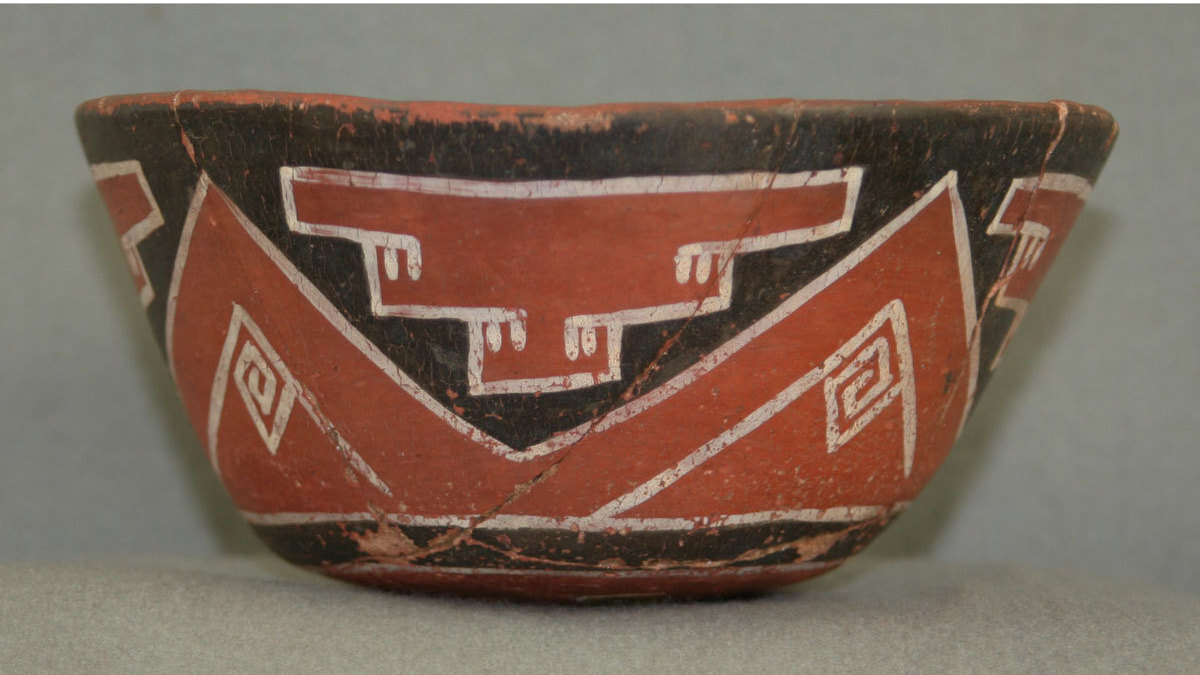 Make mine a venti: An example of a drinking vessel from the Grasshopper Pueblo archaeological site in central Arizona. Researchers tested shards of similar vessels found at various sites in the American Southwest and found evidence that people in the region were drinking caffeinated cacao and yaupon holly drinks 1,000 years back.

Feeding a caffeine habit is no sweat in our day and age: Just raid the office kitchen for some tea or hit one of the coffee shops that pepper the landscape.

But 1,000 years ago, Native Americans in the American Southwest and Mexican Northwest were getting their buzz on in landscapes where no obvious sources of caffeine grew, according to new findings published in the Proceedings of the National Academy of Sciences.

The research shows that people in the arid region — who had no nearby sources of caffeine — not only made drinks from cacao, the seed that is used to make chocolate, but also brewed drinks from the leaves and twigs of yaupon holly. That suggests that they had developed pretty extensive networks to trade caffeinated products between 750 and 1400 AD.

Patricia Crown, a professor of anthropology at the University of New Mexico, led a team that analyzed 177 pottery samples from 18 sites in Arizona, Colorado, New Mexico and Chihuahua, Mexico. (During the analysis, scientists were not allowed to bring any caffeinated beverages into the lab, for fear of contamination). They found caffeine residue on pieces of jars, pitchers and mugs in 40 samples from 12 sites and conclude that the groups "likely consumed stimulant drinks in communal, ritual gatherings."

Scientists have known that people in Mesoamerica — a region extending from modern-day central Mexico down through Central America — were already drinking frothy, caffeinated chocolate drinks some 3,000 years ago. And Crown's earlier research had found that cacao had made its way up to the Southwestern U.S. a thousand years back. But this is the first study to also find evidence of yaupon holly, a caffeinated, botanical cousin to yerba mate, in this region a millennium ago. (As we've reported, tea aficionados are starting to rediscover the virtues of yaupon.)

Yaupon is a caffeinated plant native to the Southeast, where Native Americans brewed it into a drink used ceremonially, often in rituals that involved purging. (Thus, yaupon's Latin name, Ilex vomitoria, though it is not an emetic). Several years ago, Crown led a team that found traces of caffeine — from drinks made with yaupon holly — at a site of a mound city near the confluence of the Missouri and Mississippi rivers. That suggested that yaupon was already extensively traded in the Eastern side of what is now the U.S. 1,000 years ago. 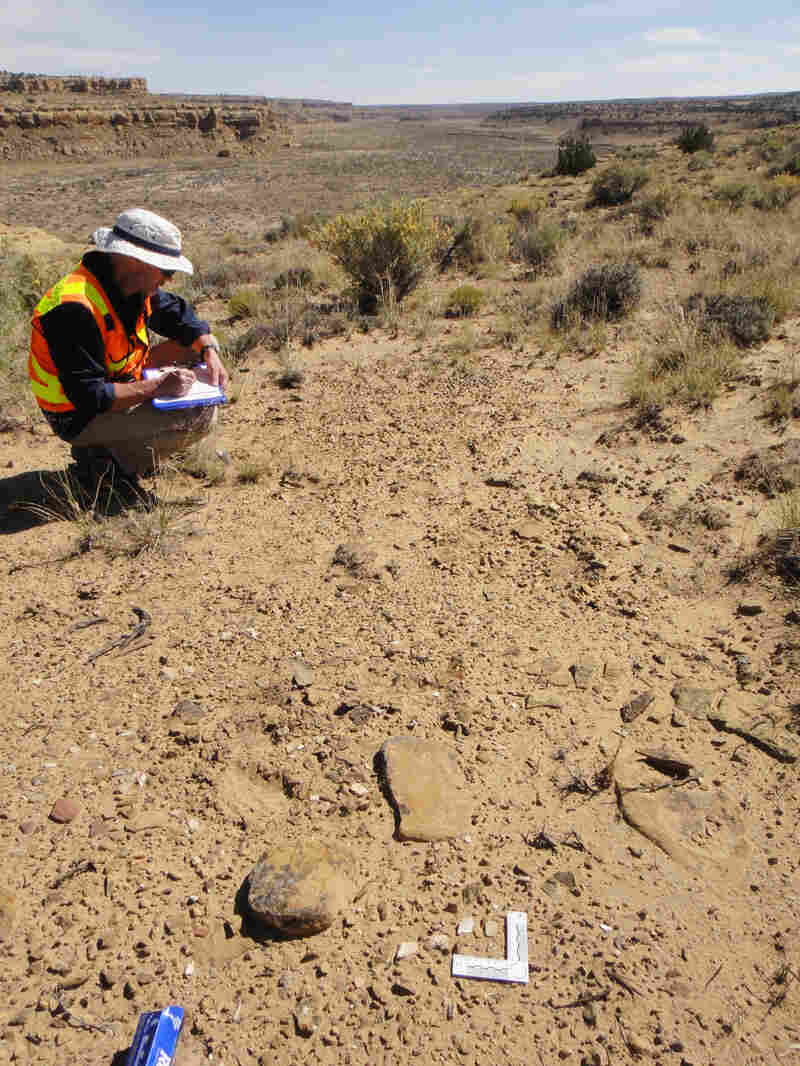 Archaeologist Chip Wills records samples of vessel shards at the Shabik'eschee Village in Chaco Canyon for residue analysis. In the foreground is a scale measuring a shard used in the analysis. Courtesy of Patricia Crown hide caption 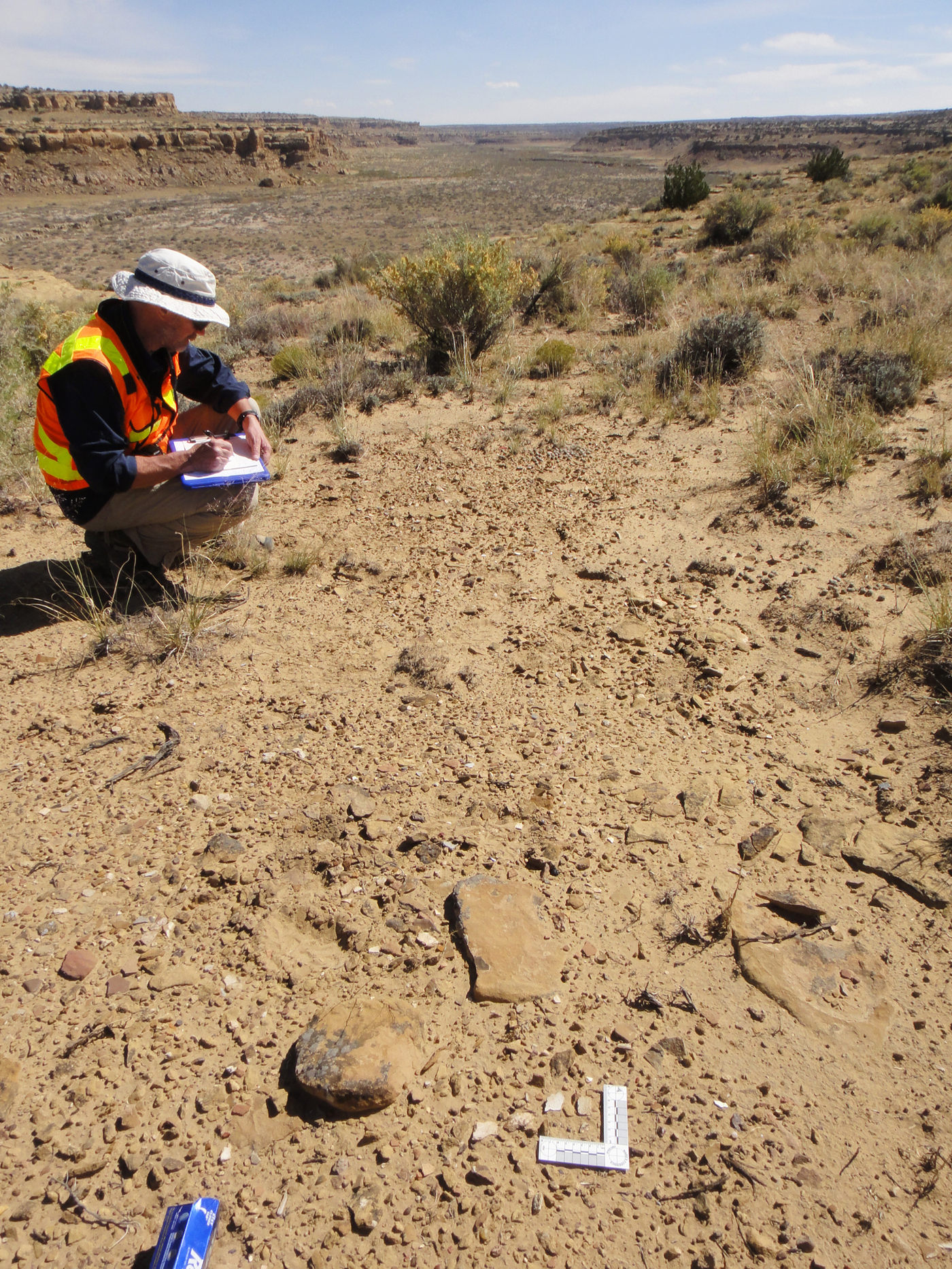 Archaeologist Chip Wills records samples of vessel shards at the Shabik'eschee Village in Chaco Canyon for residue analysis. In the foreground is a scale measuring a shard used in the analysis.

The new research was sparked years ago, when Crown was looking at some unusual pottery in Chaco Canyon in New Mexico. "The initial idea developed out of looking at Chacoan cylinder jars and trying to understand how they were being used," she says.

When she tested the jars for residues, she was surprised to find that the "analysis showed very clearly that they were being used to drink cacao-based drinks." That got her wondering just how far back in time, and how widespread, the cacao trade went.

"When does it start? How widespread is it? How late does it go?" Once she and her colleagues started asking those questions, she says, "it became clear that it wasn't just cacao, that there was something else there — that is, the holly-based drink. All of that has surprised me."

Janine Gasco, an anthropology professor at the California State University, Dominguez Hills, has studied the cacao trade extensively. She says the new findings confirm a growing body of knowledge.

"Any Mesoamerican archaeologist that works on that time period is well aware of that phenomenon: increased trade, increased long-distance trade in more and more products," she says. "It builds the argument even further that there was this vibrant trade going on."

One bit of the puzzle that's still not solved: Just where did that yaupon come from? It may be that Southeastern tribes traded the yaupon leaves with Southwestern tribes.

But there are also smaller, isolated patches of yaupon growing in Mesoamerica, and it is possible that yaupon came to the Southwest along the same trade routes that cacao traveled from the humid, tropical lowlands where it thrives. (Cacao was not the only Mesoamerican product imported to the Southwest: scarlet macaws, pyrite mirrors, and copper bells were also traded.) However, there's no historical evidence for the use of yaupon drinks in Mesoamerica.

Crown says wherever it came from, the presence of both yaupon and cacao fills in the picture of early caffeine use in the region.

"I think it points out how extensive the use of caffeinated plants for drinks was in North America," says Crown, "and that more work needs to be done to try to figure out exactly where that was coming from."

As for her own caffeine preferences? Crown says she's partial to tea.

Murray Carpenter is a journalist and author of Caffeinated: How Our Daily Habit Helps, Hurts And Hooks Us.