Accessibility links
Gooey Goodness: Ramallah's Stretchy Ice Cream Delights : The Salt For decades, two rival West Bank shops have been selling a type of ice cream that stretches like melted mozzarella on a pizza. The secret to the frozen treat is part science, part presentation. 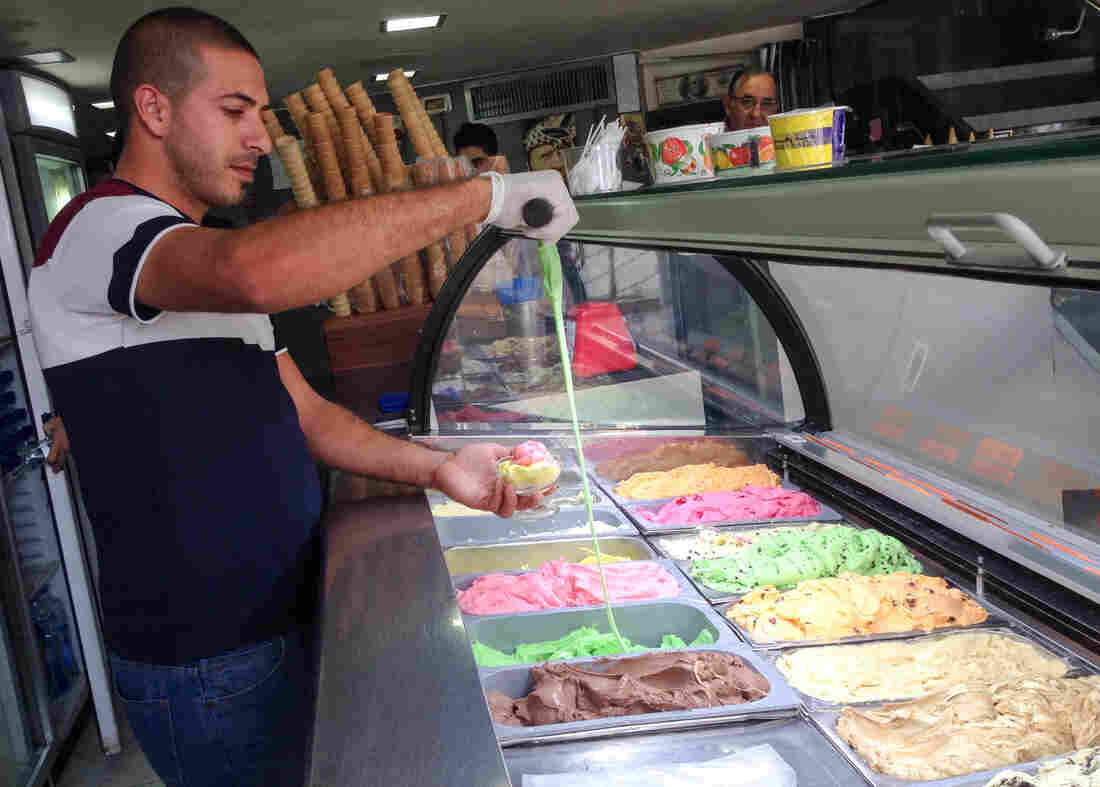 At Rukab's Ice Cream Parlor in downtown Ramallah, servers can stretch some flavors over a foot. Emily Harris/NPR hide caption 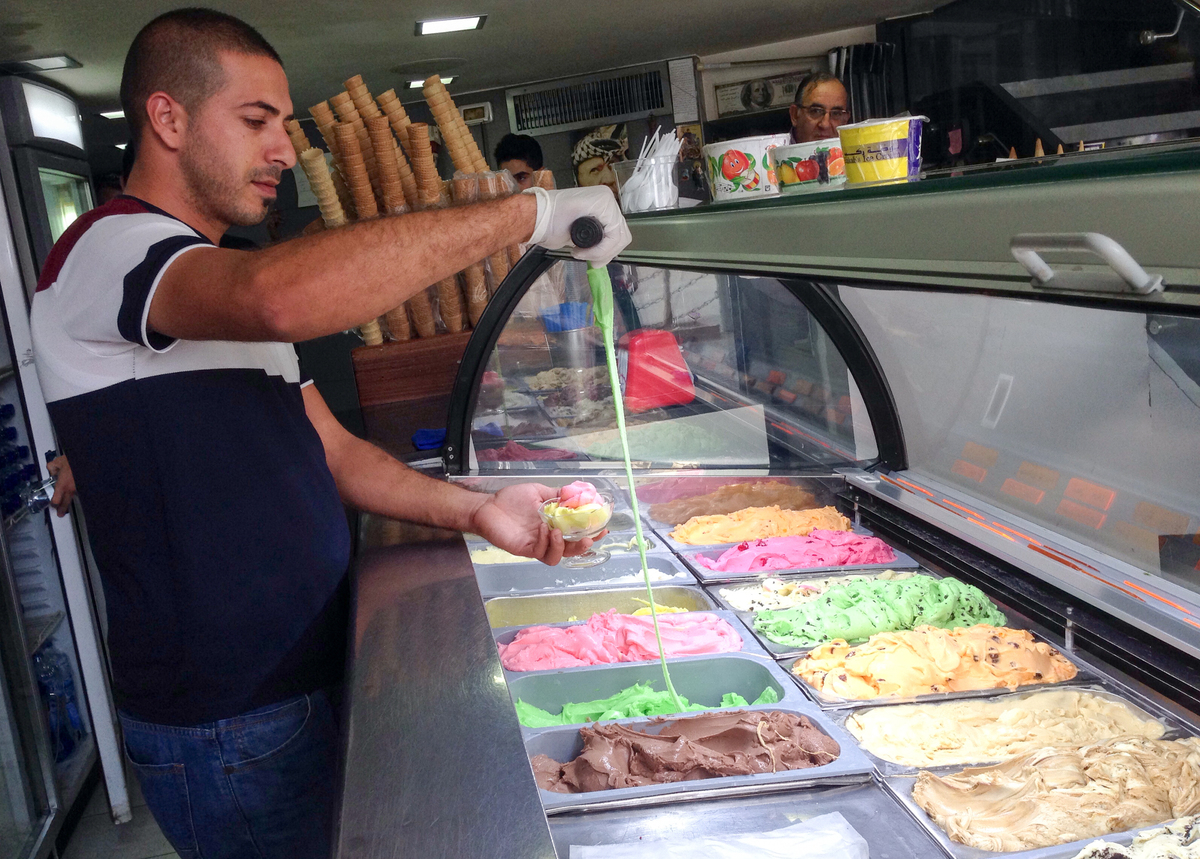 At Rukab's Ice Cream Parlor in downtown Ramallah, servers can stretch some flavors over a foot.

What if a spoonful of ice cream could stretch out like melted mozzarella on a pizza?

Ice cream with an elastic texture is a treat around the Levant. In Ramallah, two shops – with intertwined histories — cater to Palestinian cravings.

Rukab's is the original. It opened in 1941 as a cafe in the same spot where it still stands. But 59-year-old Hassan Rukab, son of the founder, says his family's ice cream business was operating much earlier. 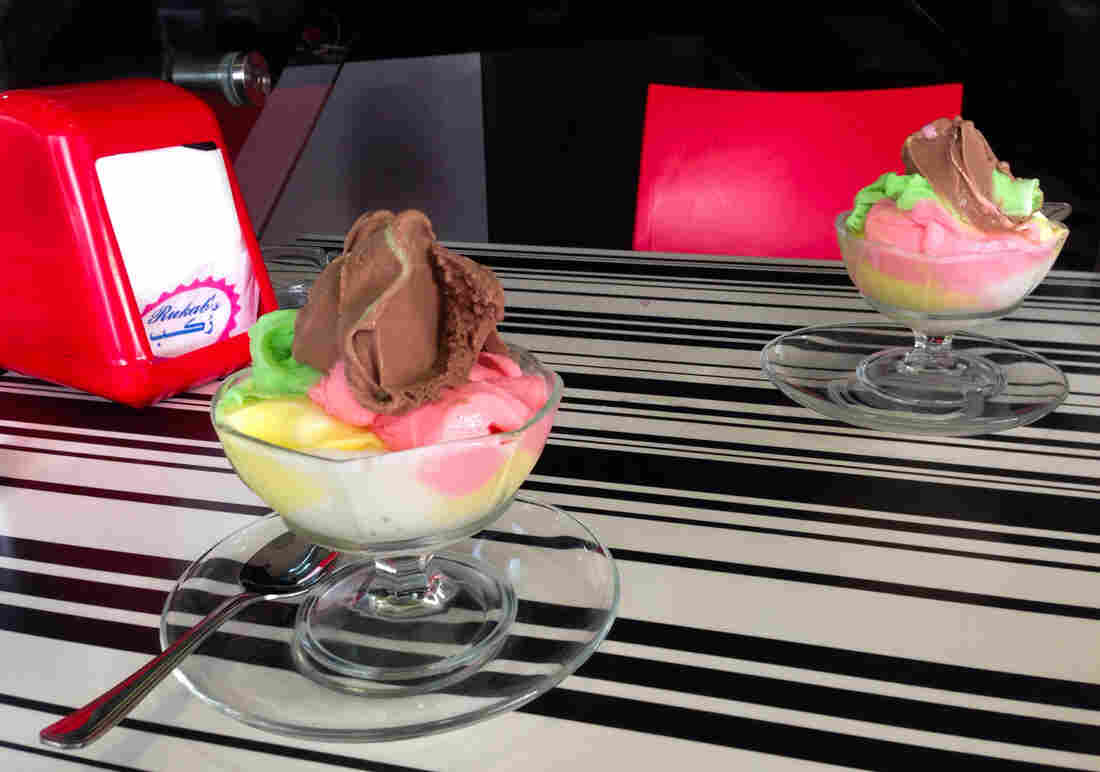 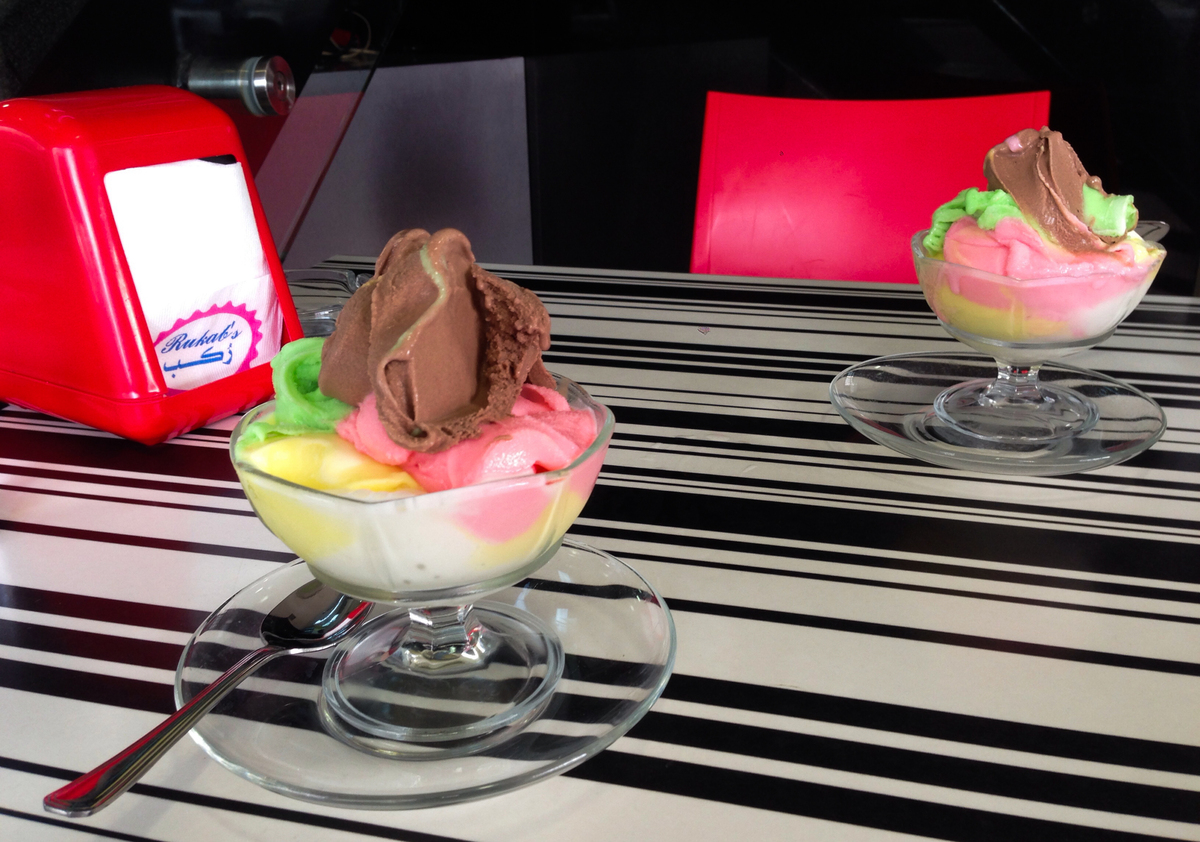 They say they love the taste and the presentation. And oh yes, the stretchiness. Servers can pull the colorful ice cream into taffy-like strands over a foot long.

"I don't know what is the secret behind the stretchy," says Aida Samara, who has stopped by with work friends. "But anyone who eats it likes this stretchy thing."

"I especially like it like this," says Sami Tu'men, a businessman who lives an hour's drive north but makes it a point to stop at Rukab's whenever he is in Ramallah. Tu'meh says it reminds him of ice cream he had in Damascus, before the Syrian civil war.

It turns out he tried it at Bakdash, a landmark in Damascus that sources there say is still serving, and that has expanded to Jordan to cater to Syrian refugees there.

But the origins of this type of ice cream likely lie in Turkey.

There it's called dondurma, and seems more sticky than stretchy in the many online videos of vendors teasing tourists. *

According to Mary Isin, author of Sherbet and Spice: The Complete Story of Turkish Sweets and Desserts, the Turkish variety is traditionally beaten with long wooden paddles while it is freezing to increase the stretchy texture.

Ingredients play a role, too, in both elasticity and slower melt times. Salep (from the root of a wild orchid) and mastic gum (the dried sap of the mastic tree) are traditional ingredients that add elasticity to ice cream, says Max Falkowitz, the resident ice cream expert at Serious Eats.

Both are "hydrocolloids," he wrote in an email, "a class of chemical substances that form gels when immersed in water." Gelatin and pectin are perhaps more familiar hydrocolloids in American kitchens.

"Different hydrocolloids make different kinds of gels," he explained. "Mastic and salep, when mixed with fatty cream, milk, and sugar, happen to form chewy, gummy ones."

Ramallah's stretchy ice cream vendors both still use long paddles and some form of hydrocolloids to make their many flavors.

In the small factory of Baladna, workers use the paddles to push ice cream down as it whirls in modern Italian gelato machines. 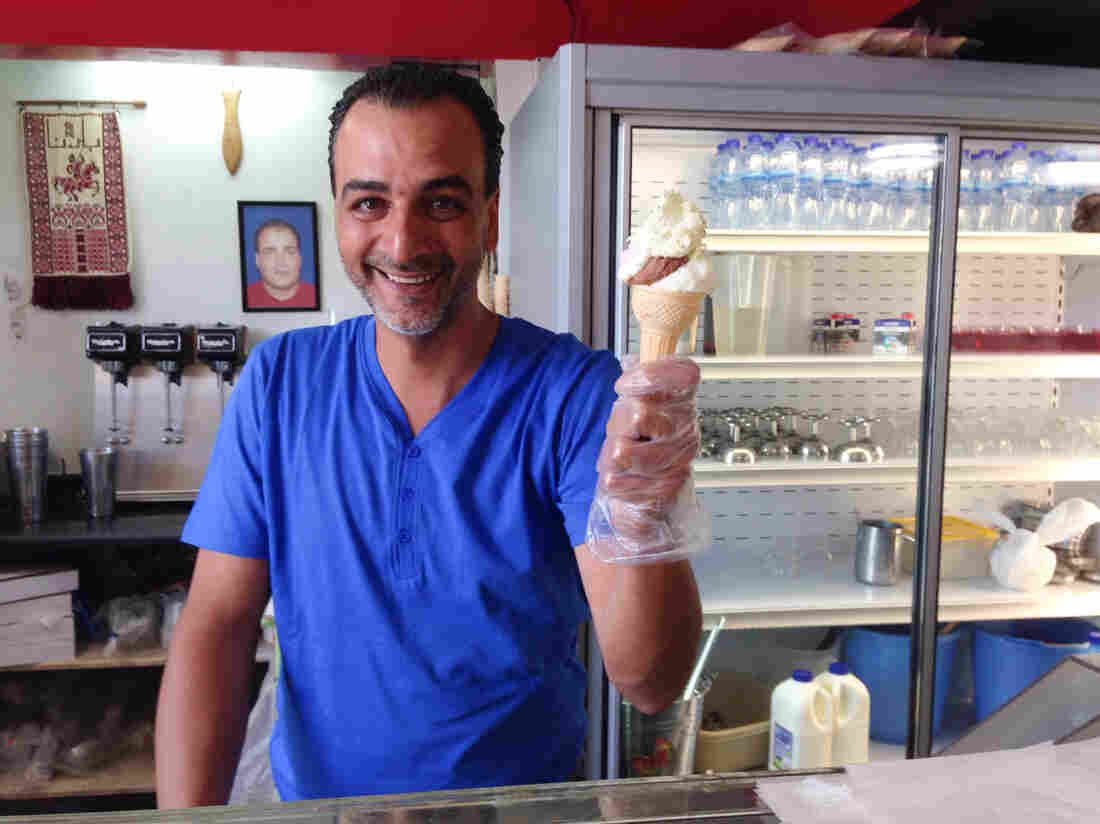 "The stickiness is about the ingredients and about the way we freeze it," says Imad Mimseeh, a co-owner of Baladna. (At 23 years old, it's the newer of Ramallah's two stretchy ice cream shops.)

He won't tell his ingredients.

He does show me a box of mastic gum from Greece. Salep, he says, is very expensive.

Baladna and Rukab's share a bit of bad blood. Mimseeh's uncle — who has since passed away — started Baladna after decades of working at Rukab's. The shop owners' stories about what happened are different.

And they both — no surprise — say their ice cream is the best. The classic combination served in Ramallah is a six-flavor scoop including pistachio, Arabic gum, chocolate, pineapple, lemon and strawberry.

Both Rukab's and Baladna wrap up these combo cones for street vendors to hawk for less than a dollar.

Rukab's owner, Hassan Rukab, says he doesn't know why people like stretchy ice cream so much.

I did find one detractor – sort of. Mahmoud Shahin, 19, said when he eats elastic ice cream it feels like a struggle. "You're fighting your ice cream?" I asked. "Exactly," he laughed.

Well, he won, downing a dish of Rukab's coffee and caramel after coming into the shop just on a craving.

* Thanks to Anders of Ice Cream Nation for alerting me to that motherlode of videos.