Accessibility links
Oh, Nuts! Why California's Pistachio Trees Are Shooting Blanks : The Salt This year, as many as 50 percent of the pistachios harvested in California could be hollow inside. Blame it on drought, heat and weather changes that are messing with male trees' virility. 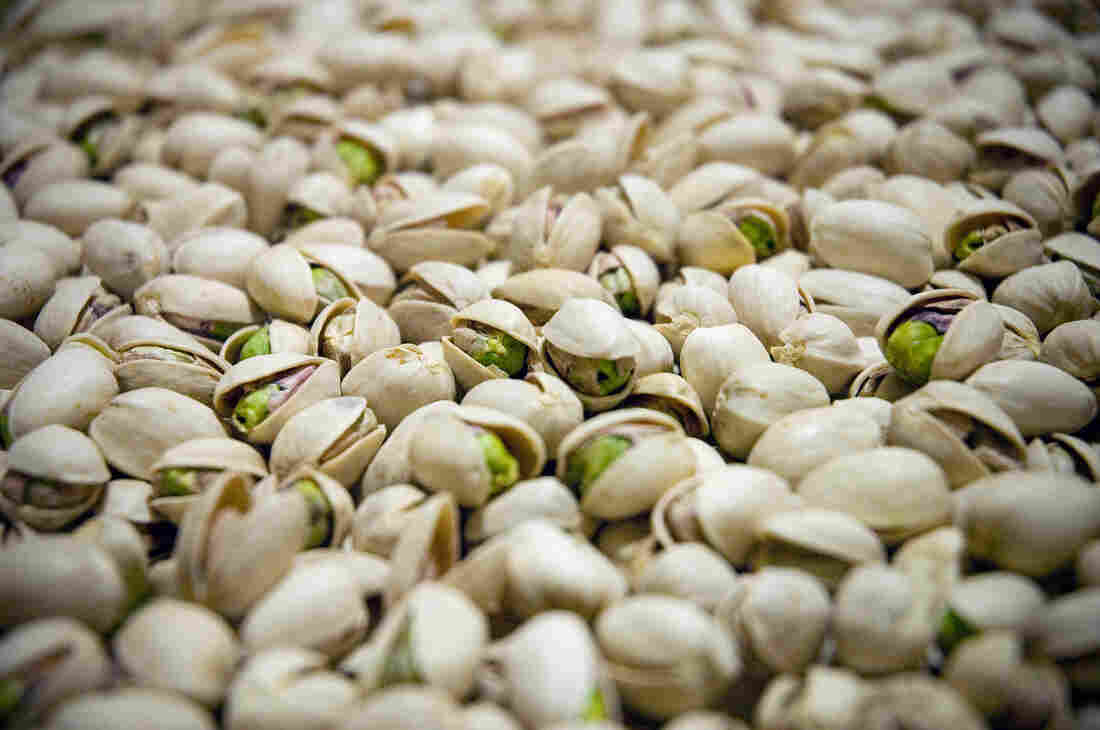 This year, many of the pistachios grown in California's San Joaquin Valley are missing the green, fatty meat that nut lovers crave. Instead, they're empty inside, the result of drought, heat and weather pattern changes that have messed with pistachio tree fertilization. Kreg Steppe/Flickr hide caption 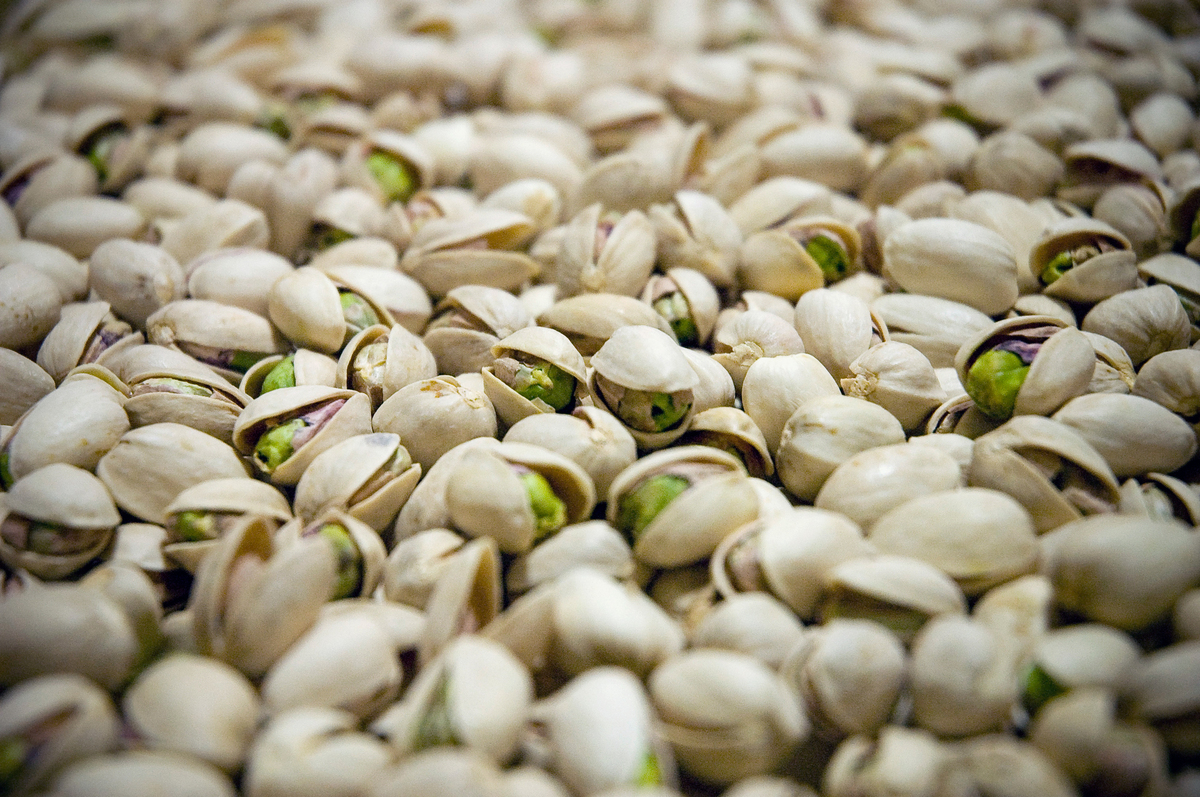 This year, many of the pistachios grown in California's San Joaquin Valley are missing the green, fatty meat that nut lovers crave. Instead, they're empty inside, the result of drought, heat and weather pattern changes that have messed with pistachio tree fertilization.

In California's blazing hot San Joaquin Valley, millions of pistachio trees are now buried in clusters of small pinkish-green fruits — what would seem like a bumper crop.

But for many growers of the popular nut, the season is shaping into a disaster. Jeff Schmiederer, who farms 700 acres of family-owned pistachio trees on the western side of the San Joaquin Valley, says about 90 percent of the nuts he has sampled from his trees are hollow — what growers call "blanks."

"I've never seen a year this bad for blanks," says Schmiederer, who has been farming pistachios since the mid-1990s.

Richard Matoian, executive director of the Fresno, Calif.-based industry group American Pistachio Growers, says hollow nuts are always present in the pistachio crop, but usually the blanking rate runs about 10 percent. This year, as much as 50 percent of the harvested nuts could be hollow, Matoian says. He estimates this year's harvest could be 300 million pounds or less — down from 520 million pounds in 2014.

Behind the blanks are the same culprits as in many other ongoing agricultural crises: drought, heat and abnormal West Coast weather. Pistachios need plenty of cold during the winter — what farmers call chilling hours. This is essential for the female and male trees to properly bloom and pollinate. But if the winter doesn't provide the minimum chilling requirements, the male trees, which are scattered among the females, malfunction. So the male trees bloom and release pollen at the wrong time — often, after the female trees have bloomed.

"It could be compared to a bunch of guys going to a party, but getting there late — after all the girls have gone home," Matoian says.

Last winter was unusually balmy in interior California, with very little fog or rain in the normally wet months and a record-warm February.

For pistachios, the result of such conditions can be hollow nuts. The trees almost always produce shells, even after a winter of suboptimal conditions. However, they don't necessarily fill out with green, fatty pistachio meat. A pistachio tree full of blanks can easily fool a farmer scoping out his or her orchard from the roadside into thinking they're looking at a whopper crop.

After harvest, the truth is revealed when the pistachios are dumped into a water bath as part of standard processing. Blanks float, while full nuts sink. 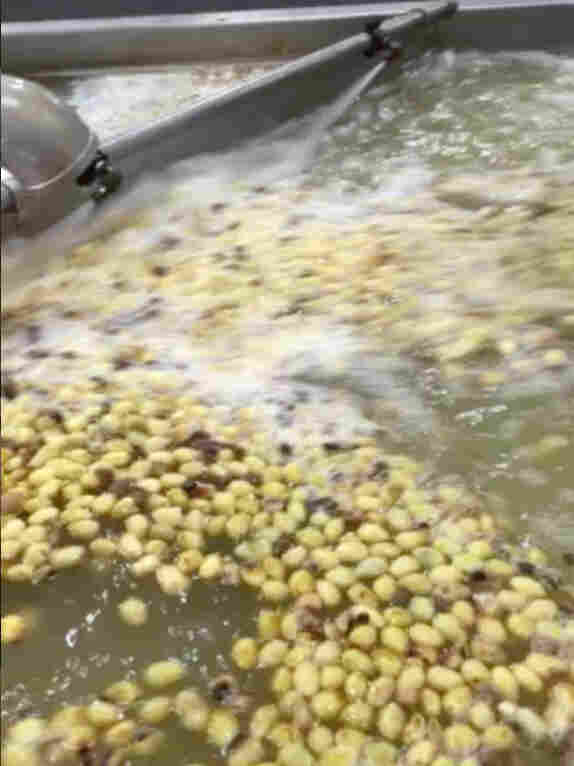 Hollow pistachios aren't spotted until after the harvest, when they're dumped into a water bath as part of standard processing. Blanks like the ones seen here float, while full nuts sink. Courtesy Andrew Howe/Horizon Nut Co. hide caption 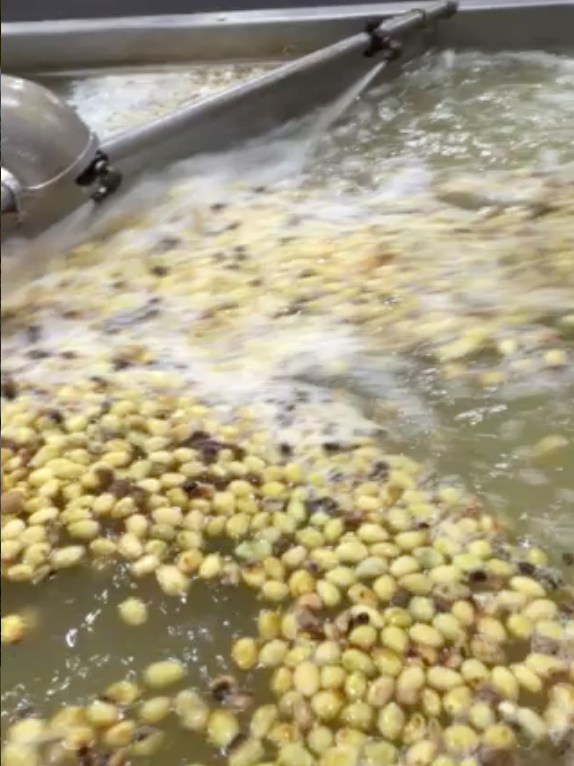 Hollow pistachios aren't spotted until after the harvest, when they're dumped into a water bath as part of standard processing. Blanks like the ones seen here float, while full nuts sink.

California is home to 99 percent of the nation's pistachio orchards. But not all of the growing regions are showing high ratios of blanks. In lower-lying parts of the San Joaquin Valley, where sinking cold air tends to pile up in the winter, the crop is looking relatively good. Kevin Herman, a grower with about 1,200 acres of pistachios in Merced and Madera counties, is having a fine year.

"I'm not really being affected," he says. "My blanking levels are only about 5 percent." Ditto, Herman adds, for his nearby neighbors.

But on the higher-elevation edges of the wide agricultural valley, and in the southern regions, pistachios have not experienced adequate chilling hours for for at least two winters in a row. Yields here have been severely depressed.

The erratic blooming of the trees has also led to timing problems with the harvest. Because the bloom may last longer during warmer winters, fruiting in the summer becomes spread over a longer period of time. For processors, this is a major nuisance and cost. It means operations must keep running for two or three times as long to handle a smaller-than-normal crop.

"Most years, we harvest 90 percent of the crop in a 21-day window," says Andrew Howe, general manager of Horizon Nut Company, a processor with headquarters in Tulare, Calif. "Last year, it took 60 days." This year, harvest started in mid-August, Howe says, and will probably run into October.

Gurreet Brar, a nut crop specialist with the University of California Cooperative Extension program, says there may be ways to help pistachio farmers deal with warmer winters. Brar's research is geared toward understanding how pistachios react when chilling requirements are not met. The hope is to better predict the trees' behavior and develop chemical treatments to ultimately boost crop yields following warm winters. Breeding new male and female pistachio varieties that require fewer chilling hours to bloom in sync is also a possible solution, Brar says, but one that is decades away.

Pistachios have become a lucrative crop for farmers in California's San Joaquin Valley. As with almonds, demand for pistachios is huge, and new acreage is being planted rapidly. Currently, California is home to about 225,000 acres of mature trees, with another 75,000 acres maturing toward full production age — which usually comes at seven to nine years. Pistachios are less demanding of water than almonds are. However, to produce a bumper crop, the trees require generous irrigation — a tall order in times of drought.

Scientists are anticipating a massive El Nino this winter, which could deliver gushing downpours and, hopefully, snowpack in the high mountains. For farmers, many of whom have been struggling to keep their crops irrigated, this is excellent news. But for pistachio growers, it might come with a bitter aftertaste.

"We could get a lot of rain and help refill our groundwater reserves," says Carl Fanucchi, a retired farmer from Bakersfield who now offers consulting services for pistachio farmers. "But it might mean warm weather, too, and less chilling hours."

That would set the stage for another bum year in the pistachio business.

Trends toward increasingly warm weather even have Herman, virtually untouched so far by blanking, unsure of the future.

"The coffee shop talk around here is speculation on whether the weather patterns we're seeing are just a cycle, and [we'll] eventually go back to getting colder weather," Herman says. "But if this isn't a cycle, and these changes in the weather are permanent, we're wondering what the future is going to be for pistachio growers in California."