Accessibility links
Paleo People Were Making Flour 32,000 Years Ago : The Salt Research into an ancient stone found in a cave in Italy shows Paleolithic hunter-gatherers were grinding oats and other grains for flour. It's the earliest evidence yet of food processing in Europe. 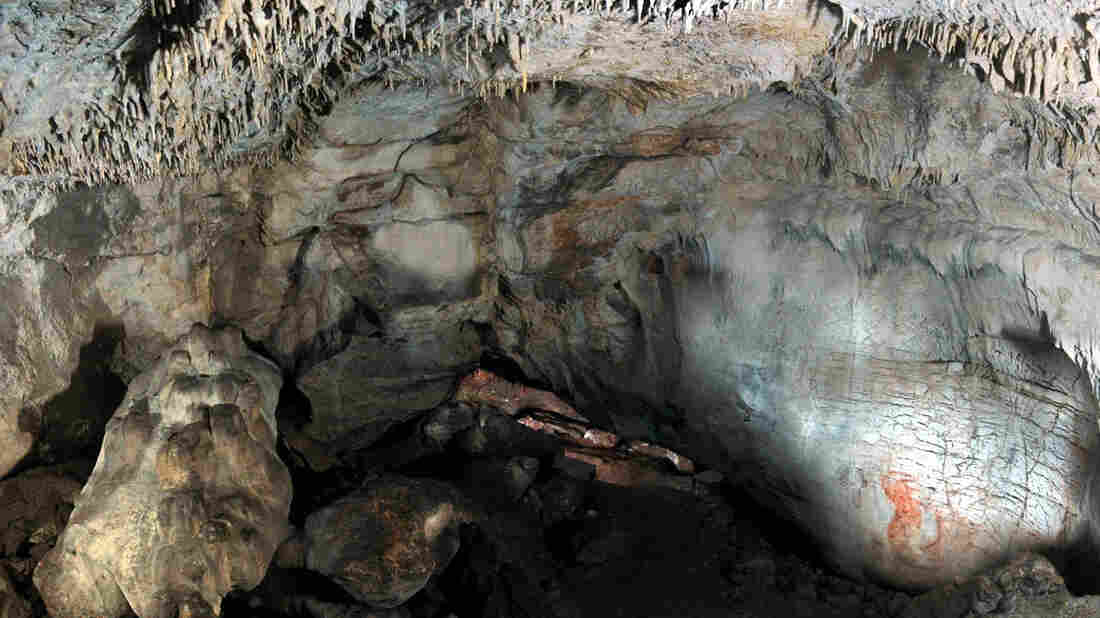 A view inside Grotta Paglicci, in southern Italy, with wall paintings. Scientists say a 32,000-year-old stone found inside the cave was used to grind flour. Courtesy of Marta Mariotti Lippi hide caption 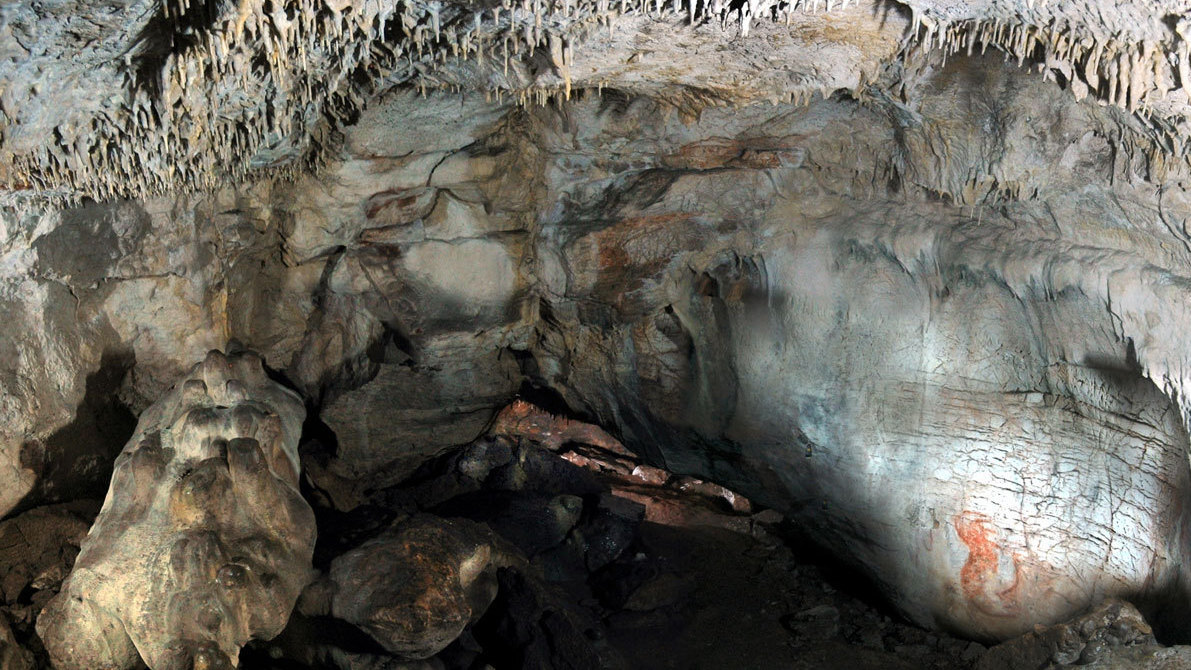 A view inside Grotta Paglicci, in southern Italy, with wall paintings. Scientists say a 32,000-year-old stone found inside the cave was used to grind flour.

Oatmeal is generally considered a no-no on the modern paleo diet, but the original paleo eaters were definitely grinding oats and other grains for dinner, according to new research.

That finding comes from new investigations of an ancient stone recovered in a cave called Grotta Paglicci in Puglia, in southern Italy. It was used by the Gravettian culture — a paleolithic people who also left behind spectacular cave paintings, evidence of burial and distinctive stone tools.

The stone, which is "pale brown and not much bigger than my hand, " was clearly used as a combination pestle and grinder, says Marta Mariotti Lippi, a botany professor at the University of Florence in Italy, who led the research team. It dates back some 32,000 years, she says, providing the earliest evidence of food processing in Europe. 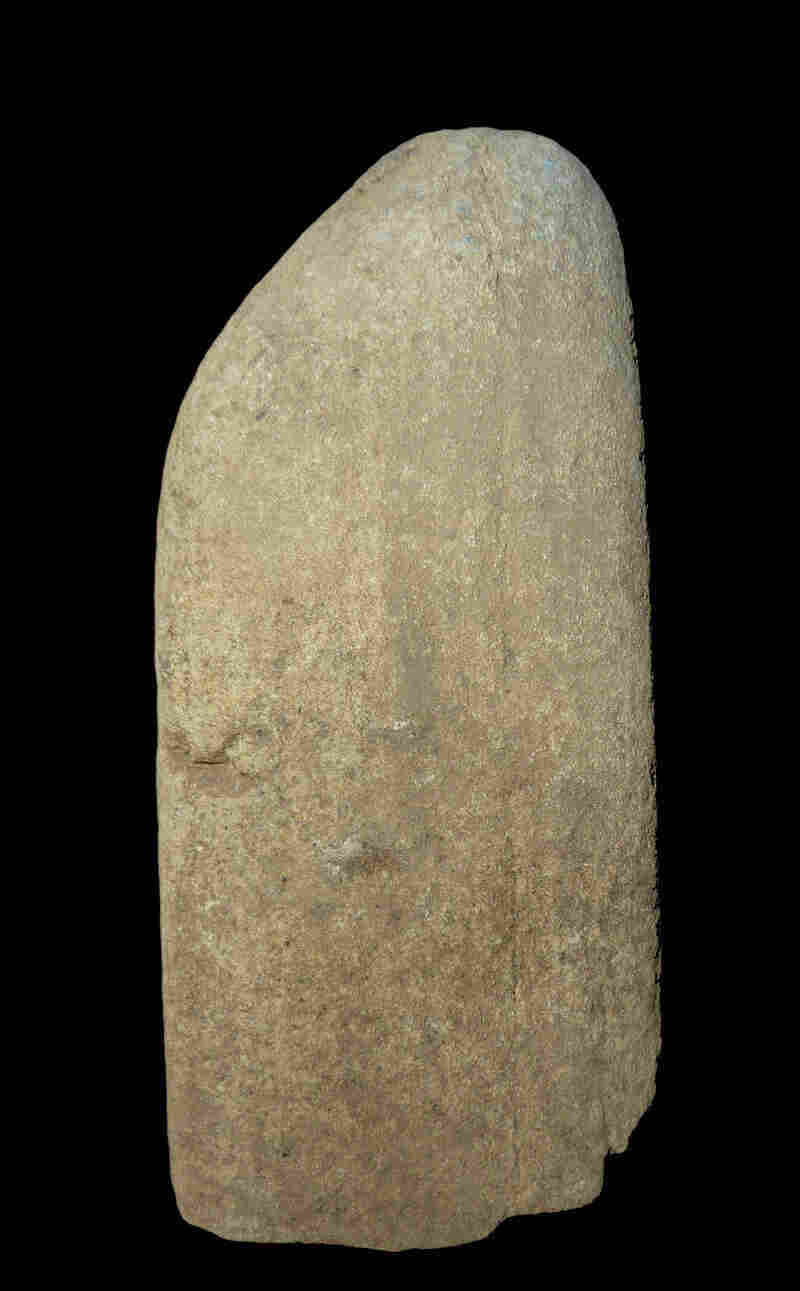 Hunter-gatherers used this stone as a combination pestle and grinder to make flour from oats and other grains, says Marta Mariotti Lippi, a professor of botany at the University of Florence in Italy. Courtesy of Stefano Ricci hide caption

"There are many other grinding tools, but this is the oldest," she says.

She says these hunter-gatherers used the rounded end of the stone to bash seeds against another rock to break them up. The flat surface of the stone shows the kind of wear that would be produced by grinding the broken seeds into flour.

The stone came to light in June 1989, and although well enough studied at the time, two years ago a new team started a fresh study of material from the cave with the latest modern methods.

The researchers sealed the stone in plastic to preserve it for future research. But they left exposed small patches that they washed with a gentle stream of water to loosen debris. In the water were hundreds of starch granules of five main types. The most plentiful, says Mariotti Lippi, were from oat seeds, almost certainly Avena barbata, a wild species still common across much of Europe. The stone also processed other edible plants, including acorns and relatives of millet.

Most intriguing, many of the starch grains were swollen and partly gelatinized, which is consistent with them being heated before grinding. Because the climate 32,000 years ago was cooler than it is today, seeds gathered in autumn might not have had enough time to dry naturally. Perhaps, Mariotti Lippi speculates, those seeds were first dried over a fire, which would have made them much easier to grind and digest than freshly gathered seeds. And ready-ground flour, she notes, would keep longer and be easier to transport.

Stone Age Britons Were Eating Wheat 2,000 Years Before They Farmed It

There are other possible explanations for why the grains show signs of heating, notes John Speth, a professor emeritus of anthropology at the University of Michigan, who was not involved in the research.

For instance, he says the stone might have been used as a pestle and grinder at one point, and later used as a type of hot coal, with grain residues still attached. He points to evidence that other paleolithic people boiled water by first heating rocks in a fire, then throwing the stones in the liquid.

But he agrees that the grains were heated as part of processing for consumption, and that this marks a key step in the evolution of human foodways in Europe.

And just how did Paglicci people eat the ground grain? "Presumably they mixed the flour with water and cooked [it]," says Mariotti Lippi.

But she's unwilling to speculate whether the outcome was a kind of flat oatcake or a gruel or porridge. She's also extremely cautious about drawing any more general conclusions about the diets of the Paglicci cave people, who lived in the middle of the paleolithic era.

"When we study grinding tools, we know that we do not find the most common plants, but the last ones processed," she notes.

As for modern ideas about the paleo diet, she says, "We have too few data to speak about diet, really, but surely they used grains."