Accessibility links
Asian Countries Have Nordic Berry Fever, And Finland Can't Keep Up : The Salt Japan, China and South Korea have discovered bilberries, lingonberries and cloudberries, which grow wild in Lapland. Exporters want to find a way to cultivate them to better control the supply. 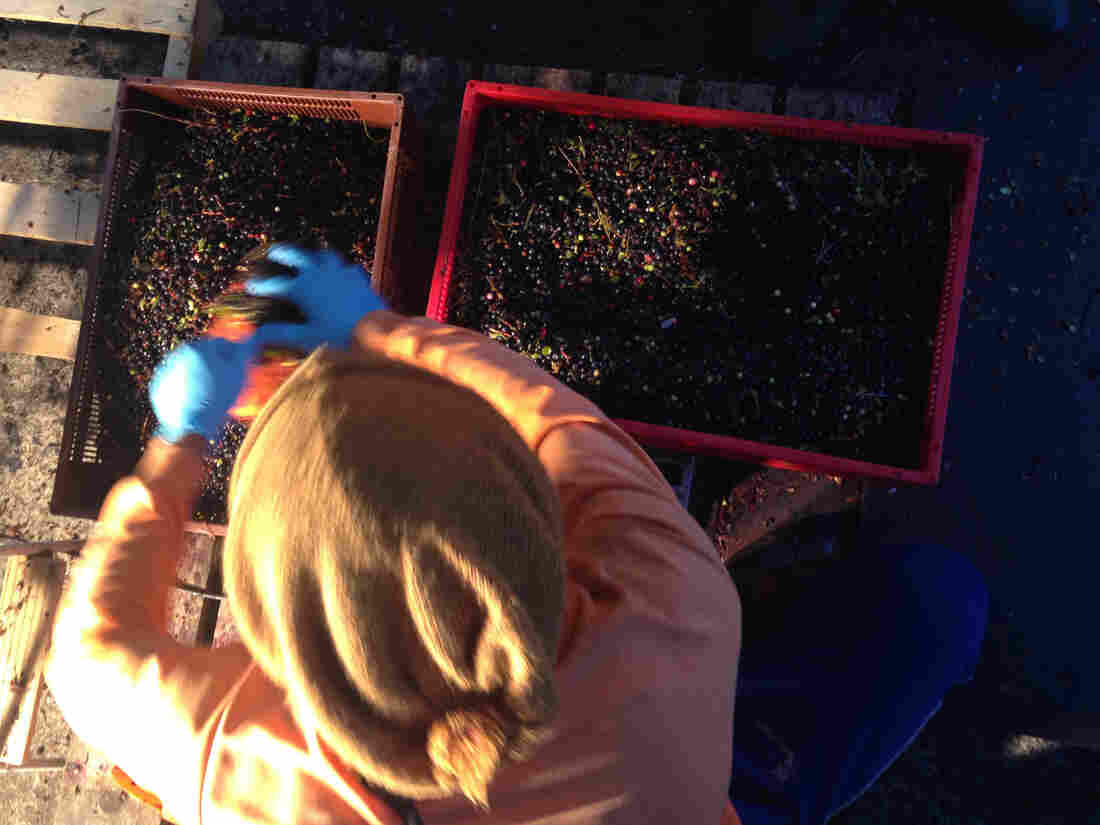 About 7,000 Thai workers come each summer to Finnish and Swedish Lapland to comb the forests for wild berries, many of which will end up on the East Asian health food market. Rae Ellen Bichell for NPR hide caption 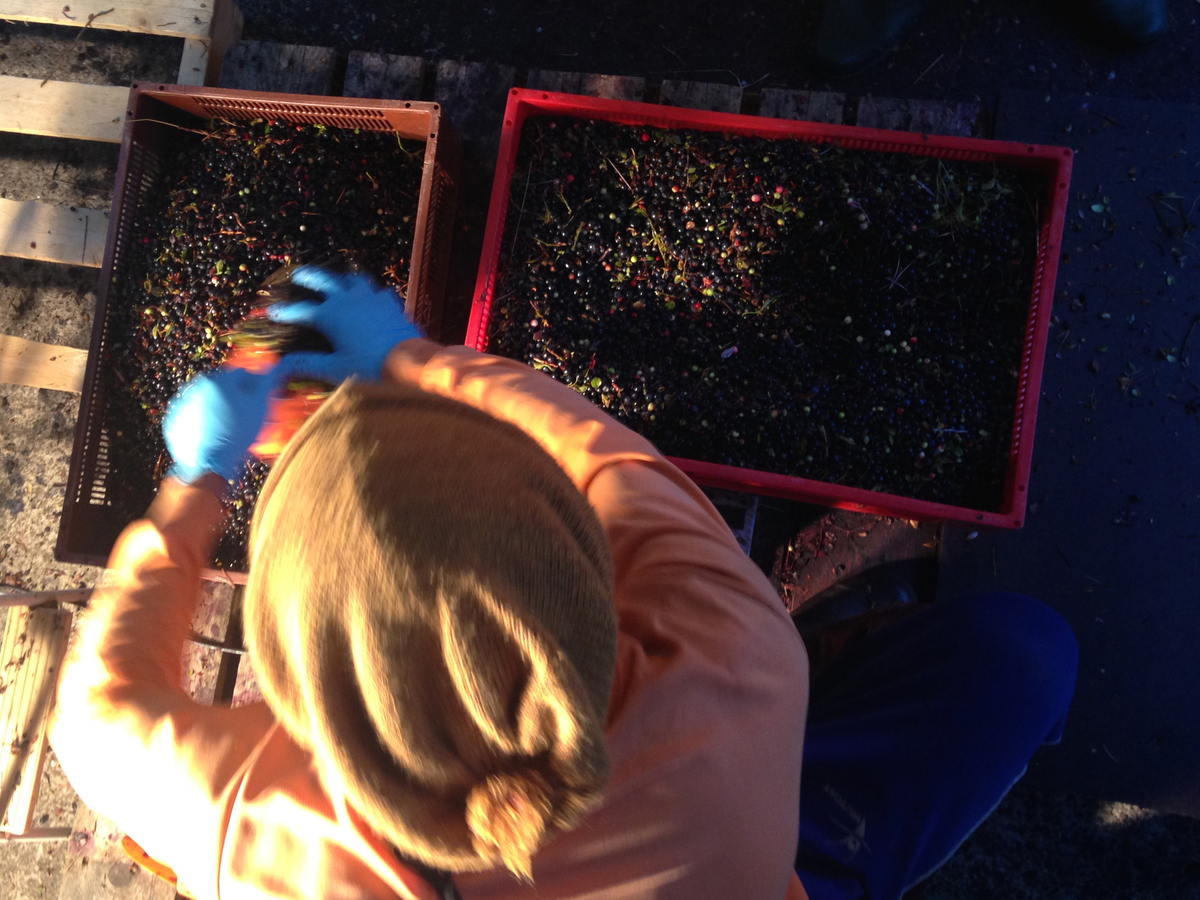 About 7,000 Thai workers come each summer to Finnish and Swedish Lapland to comb the forests for wild berries, many of which will end up on the East Asian health food market.

Right now, some 7,000 Thai workers are combing the Lapland wilderness of Finland and Sweden for bilberries, lingonberries and cloudberries. Each day, they hike into the woods that lie mostly above the Arctic Circle with buckets and simple scooping tools, emerging with up to 270 pounds in berries per person.

The pressure to pick as many tiny blue, red and yellow berries as possible is intense. If the migrant foragers are lucky, can stay healthy and find good berry patches, they can make more money in one season than they could in two years back at home.

"It doesn't matter if the crop is good or bad, you have to fight with your life," says Kalyakorn "Durian" Phongphit, who helps a berry company bring 730 Thai pickers to Finland. "Because you have an opportunity — you are here and you have limited time, 70 or 80 days. So you just do it." 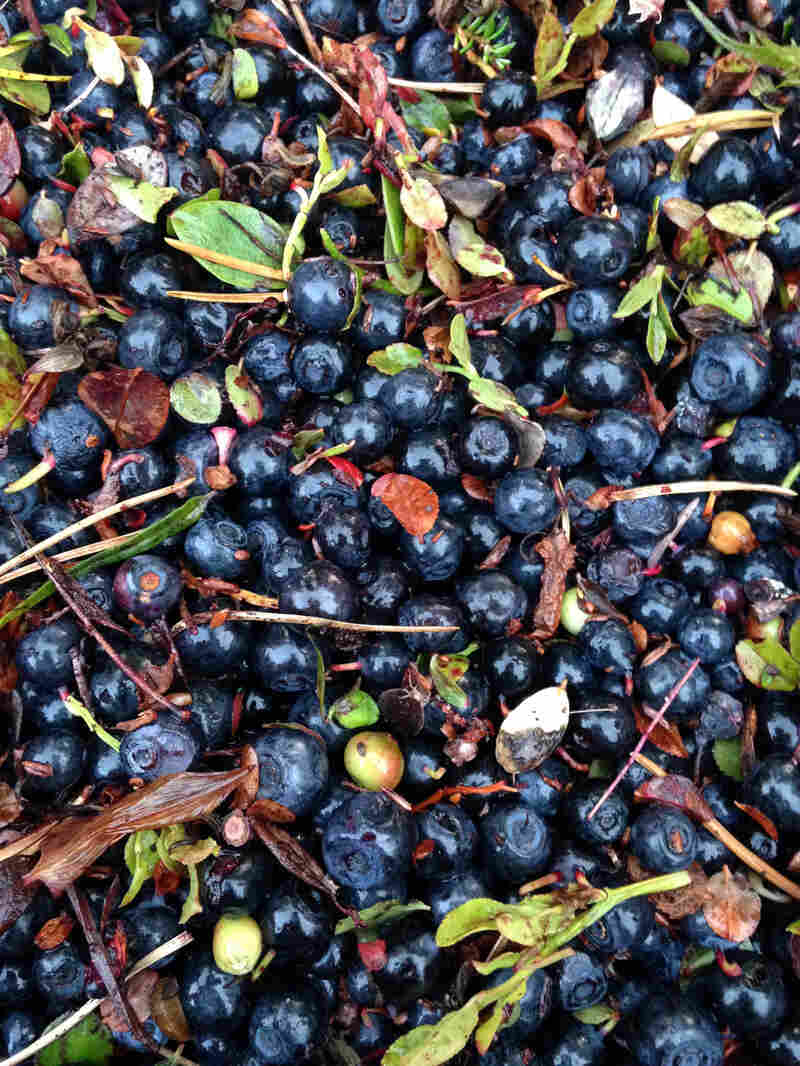 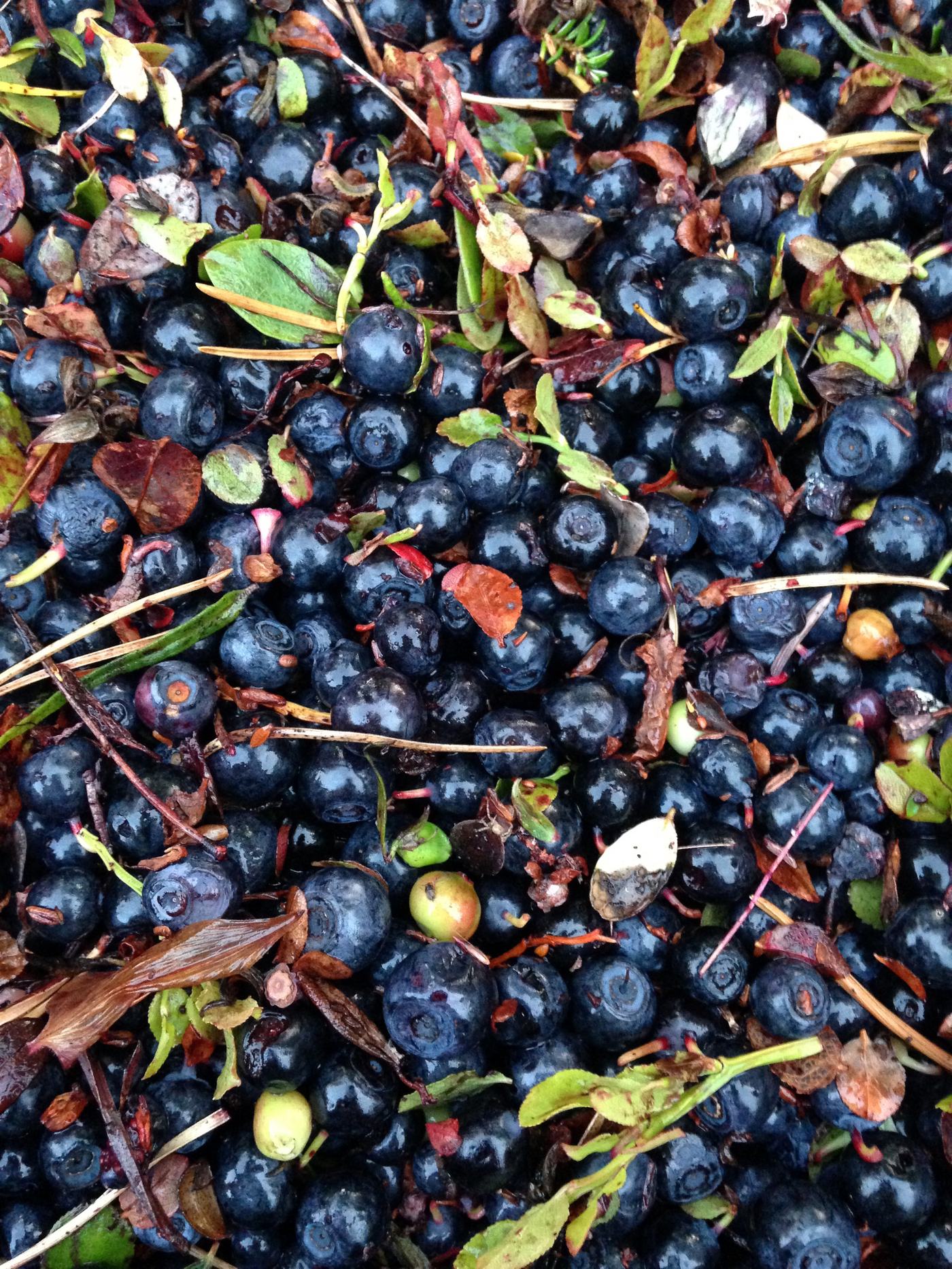 Bilberries, also known as European blueberries, grow wild in Lapland and are packed with antioxidants.

But even if each one of them picks 270 pounds a day, it won't be enough for Nordic berry companies. That's because there's an unprecedented hunger driving this industry to gather up as many as humanly possible.

Who's so wild about these intensely flavored berries? Nordic folk load them into pies, jams, breakfast porridge and reindeer meatballs. They make ice cream, juice, and even shampoo out of them.

Over the last decade, Japanese, Chinese and South Koreans have been discovering these berries, particularly in health and beauty products.

But there's actual science showing that Finnish and Swedish bilberries are packed with more vitamins and antioxidants than North American blueberries. Lingonberries can help prevent urinary tract infections. Cloudberries, the most rare and expensive of the three, may boost intestinal flora and help prevent colon cancer. And, says Rainer Peltola, a senior research scientist at the Finnish Natural Resources Institute, "a berry-rich diet has been connected with a lower risk of cardiovascular disease, obesity and type 2 diabetes."

Finland and Sweden are the top producers of Nordic bilberries, which end up primarily in China and Japan. According to Export Finland, in 2012 alone, Finland exported the equivalent of 18 blue whales in weight of fresh bilberries to Japan. From 2001 to 2010, the value of bilberry exports tripled to $370 million.

Nature is so far keeping up with the demand. Each year, Finnish forests and swamps pop out as much as 2.2 billion pounds of edible wild berries. All of that fruit is fair game for picking, thanks to Everyman's right, a legal concept in Nordic countries in which the right to pick berries, flowers, and mushrooms trumps private property.

About 3 million Finns take advantage of it to collect berries, often squirreling away bags in the freezer to eat in the winter. But even between the enthusiastic local berry lovers and hard-working Thai pickers, only 5 to 10 percent of the total forest yield gets picked each year, researchers at Oulu University estimate. 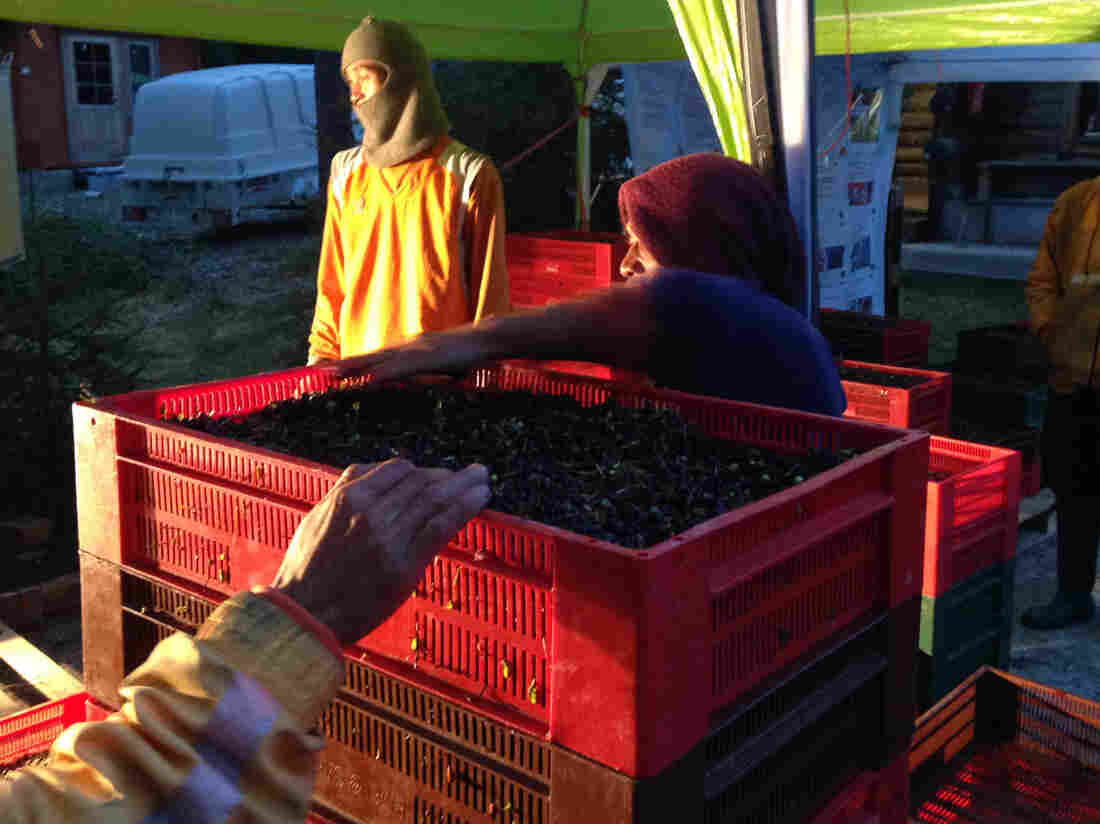 After a day in the Finnish woods, berry pickers from Thailand weigh the day's bilberry harvest into 22-pound piles, and tally up their earnings. They will get 12 euros ($14) per pile. Rae Ellen Bichell for NPR hide caption 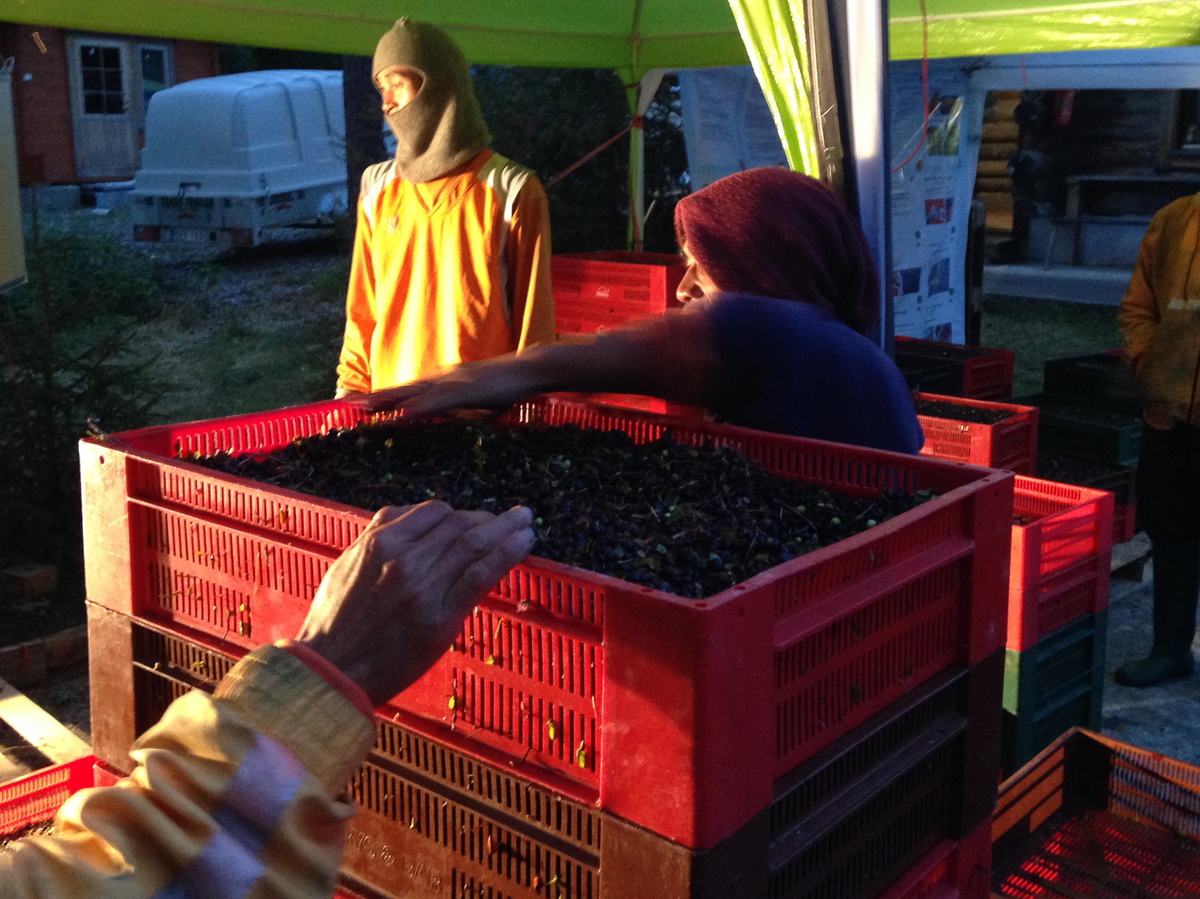 After a day in the Finnish woods, berry pickers from Thailand weigh the day's bilberry harvest into 22-pound piles, and tally up their earnings. They will get 12 euros ($14) per pile.

Rural families used to pick berries and sell the fruit to companies, but about 15 years ago, food companies in Sweden and Finland started inviting migrant laborers from elsewhere as it became harder to find local pickers. First, they invited people from Russia, Poland, the Ukraine, and Baltic countries, and now mostly Thais.

Berry picking season coincides with the monsoons in Thailand. "There is not so much to do, so it's the perfect time for them to fly over to Sweden, Finland and work here for berry picking," says Juha Ruohola, CEO of Polarica, a berry, mushroom and game-meat supplier based in Haparanda, Sweden. Polarica recruited 1,060 farmers and fishermen from rural Thailand to pick berries this season, Ruohola says.

But now, even with cheap labor on deck, the labor situation is getting increasingly untenable for the berry companies. Some are facing allegations of human trafficking and forced labor, and both Finland and Sweden have quotas on how many foreign workers are allowed in for the berry harvest.

The growing market pressure is leading to more discussion about how to develop a more dense and reliable crop farmers could control. And plant researchers and fruit companies are considering another possibility: cultivating the berries similarly to how lowbush, or wild, blueberries are cultivated in North America.

Wild plants are, of course, highly complex species adapted to their environment. Cultivating them requires a deep understanding of the soil, shade, good fungi and bees that make the plant thrive.

The Finns and Swedes are only just beginning to figure out how to cultivate the berries. But they could end up taking a cue from wild blueberry harvesters in Maine and Canada, who've figured out how to coax more berries from the bush by clearing away the forest brush so there's more sun and fewer plant competitors.

Domesticating the Nordic berries — which would involve breeding and selecting to create something akin to the highbush blueberry — is another possibility. At least one group is working on taming bilberries in North America.

"It's such a complicated process that it could take several decades for the Scandinavian countries to figure out what is the best way to grow the plant without adverse effects," says Frank Drummond, a professor at the University of Maine who studies pollination of the lowbush blueberry.

Among other things, breeding for yield can impact a plant's nutritional value.

"Maybe we'll have something when I retire after 20 years," Peltola says.

By then, the East Asians may have moved on to a new superfood health craze.

Meanwhile, by mid-October, the Thai pickers will return to their rice fields and fishing boats some 5,000 miles away. Back home, they will likely never see, much less eat, the fruit they worked so hard to forage.