Accessibility links
Most People On Food Stamps Eat Less Nutritious Food Than Everyone Else : The Salt People on food stamps on average ate fewer fruits and vegetables and had worse diets than other Americans, a study finds. It reflects the challenges of eating well on limited means. 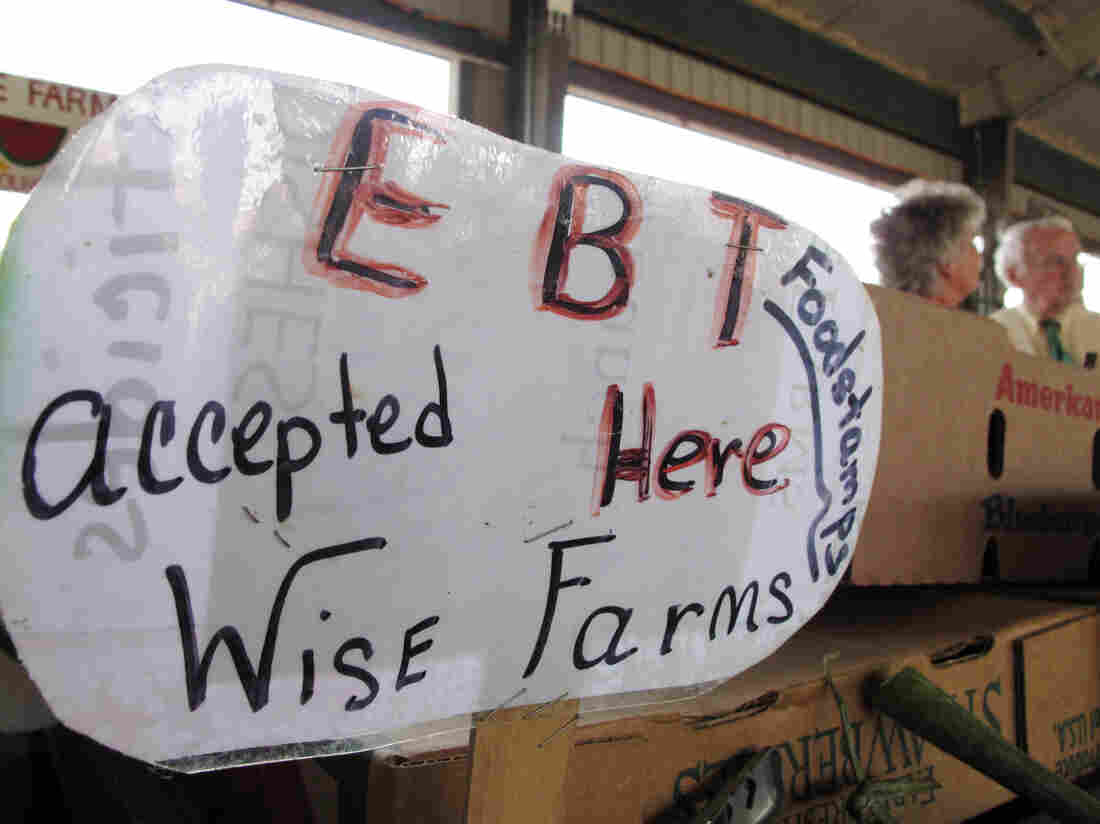 The federal food stamps program is working to make sure low-income Americans are getting enough calories, but those calories are less nutritious than what everyone else eats, research finds. The USDA is funding programs to try to bridge that gap, such as initiatives that allow food stamp recipients to use their benefits at farmers markets. Allen Breed/AP hide caption 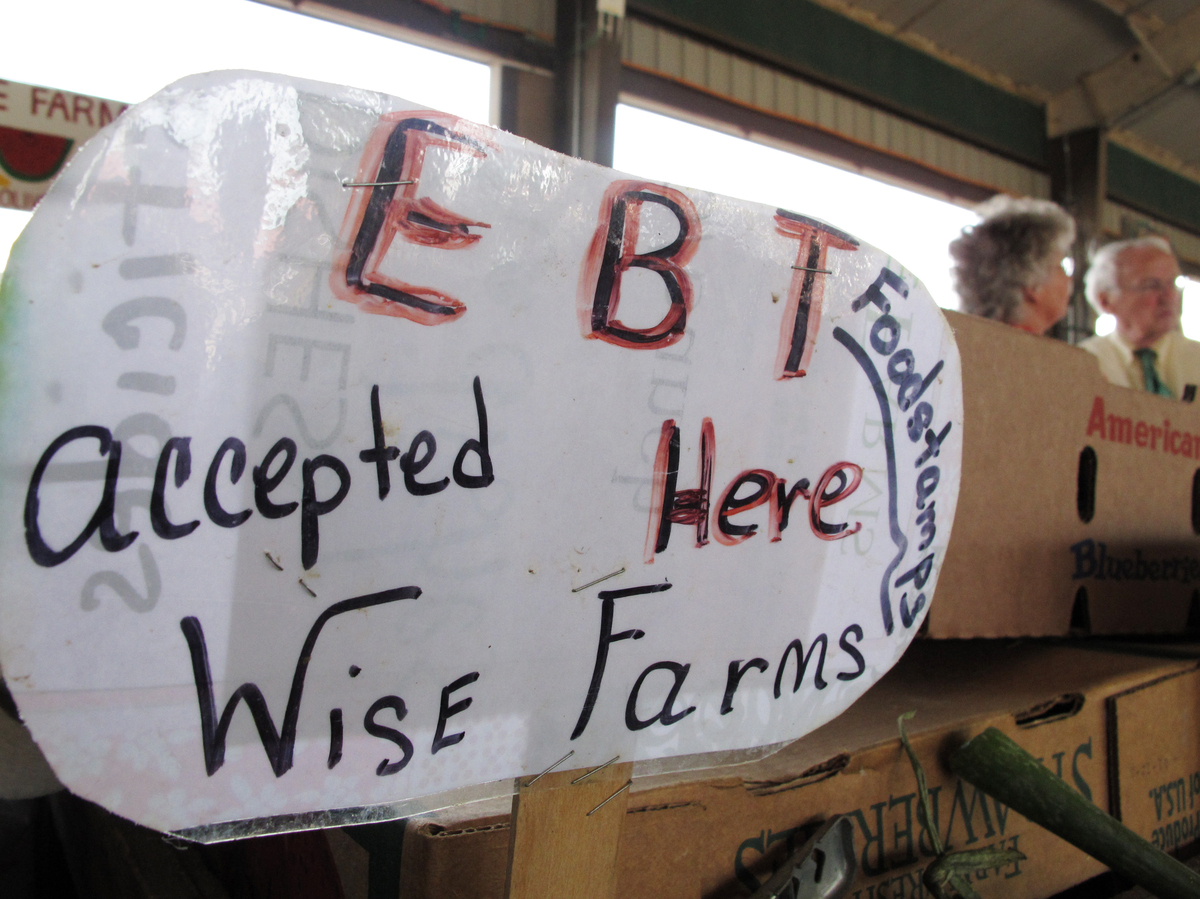 The federal food stamps program is working to make sure low-income Americans are getting enough calories, but those calories are less nutritious than what everyone else eats, research finds. The USDA is funding programs to try to bridge that gap, such as initiatives that allow food stamp recipients to use their benefits at farmers markets.

The wealth gap in America manifests itself not just in our pocketbooks but also in our bellies: The poor are eating less nutritious food than everyone else.

So concludes a new review of 25 studies published between 2003 and 2014 that looked at the food spending and quality of diets of participants in SNAP, the federal Supplemental Nutrition Assistance Program, also known as food stamps.

Compared with both higher-income Americans and low-income people eligible but not enrolled in the program, SNAP participants on average ate about the same number of calories. But they consumed fewer fruits and vegetables and whole grains and more added sugars, says Tatiana Andreyeva, the study's lead author and a researcher with the Rudd Center for Food Policy and Obesity at the University of Connecticut.

"SNAP is working to reduce food insecurity. That's the good news," Andreyeva tells The Salt. "One of the major findings is we didn't find any difference in calorie intake. The bad news is that the quality of diet is lower."

As a whole, Americans aren't exactly the healthiest eaters – only 1 in 10 of us eat enough fruits and vegetables, and much of what we do eat are tomatoes and starchy potatoes in the form of pizza and french fries. In the studies Andreyeva reviewed, the average American scored just 58 out of 100 – a failing grade – on the Healthy Eating Index, a measure of how well diets meet the federal dietary guidelines.

Andreyeva stresses that her findings, which appear in the October issue of the American Journal of Preventive Medicine, don't mean people on SNAP make particularly bad food choices. Rather, they likely reflect the reality that the people who turn to SNAP for help tend to have the most limited means. Indeed, she found that both adults and children on SNAP were less likely to eat three meals a day than higher-income people not enrolled.

"It's hard to eat healthy on a very limited budget," Andreyeva says, especially when the cheapest food is often packed with calories but not necessarily nutrients, and many lack the time and skills to cook.

About 14.5 percent of Americans — some 46.5 million people — rely on food stamps. And at a time when more than one-third of U.S. adults are obese, she hopes her research will prompt lawmakers to consider how SNAP can address not just hunger but quality nutrition.

While the move toward healthier eating habits takes hold among wealthier Americans, Andreyeva worries the poorest among us will get left behind.

"Overall I feel that diets are improving slowly," she says. "My concern is that they're not improving at all or at slower rate among SNAP participants."

Take, for example, sugary drink consumption. The studies she looked at came to different conclusions on the question of whether SNAP recipients drink more soda than everyone else. But she notes that research published just last month — too late to include in her review – found that people on food stamps got 12 percent of their daily calories from sugary drinks, versus 6 percent for higher-income people. This finding comes even as overall soda sales are declining in the U.S.

Now, the U.S. Department of Agriculture has been experimenting with incentive programs to encourage healthier eating habits for people on SNAP.

For instance, as we've reported, the agency is investing $100 million in Double Up Food Bucks, a program that doubles the value of SNAP benefits when people use them to buy fruits and vegetables at farmers markets.

And USDA also helps fund education efforts like Cooking Matters. The program teaches low-income families how to cook and shop to get the most nutritional bang for the buck – by buying frozen versus fresh vegetables, for example, or focusing on the price-per-unit rather than the total price when comparing two items.

Across the U.S., hundreds of nutrition education and incentive programs are being implemented, says Ruth Morgan, an analyst with the Altarum Institute who helps evaluate food assistance programs for the USDA.

"There's been a push on USDA side to see what's working. Everyone is reinventing the wheel," Morgan says.

But these incentive programs are run by states and private organizations, so the USDA's Food and Nutrition Service says it's hard to know just how many hungry Americans on SNAP they're reaching.