Accessibility links
Keeping Loved Ones' Holiday Recipes Alive, Long After They've Left The Table : The Salt NPR's Marc Silver lost his mother-in-law in 2005. But she remains a presence at family meals this Jewish holiday season, through his dogged trial-and-error attempts to re-create her favorite treats. 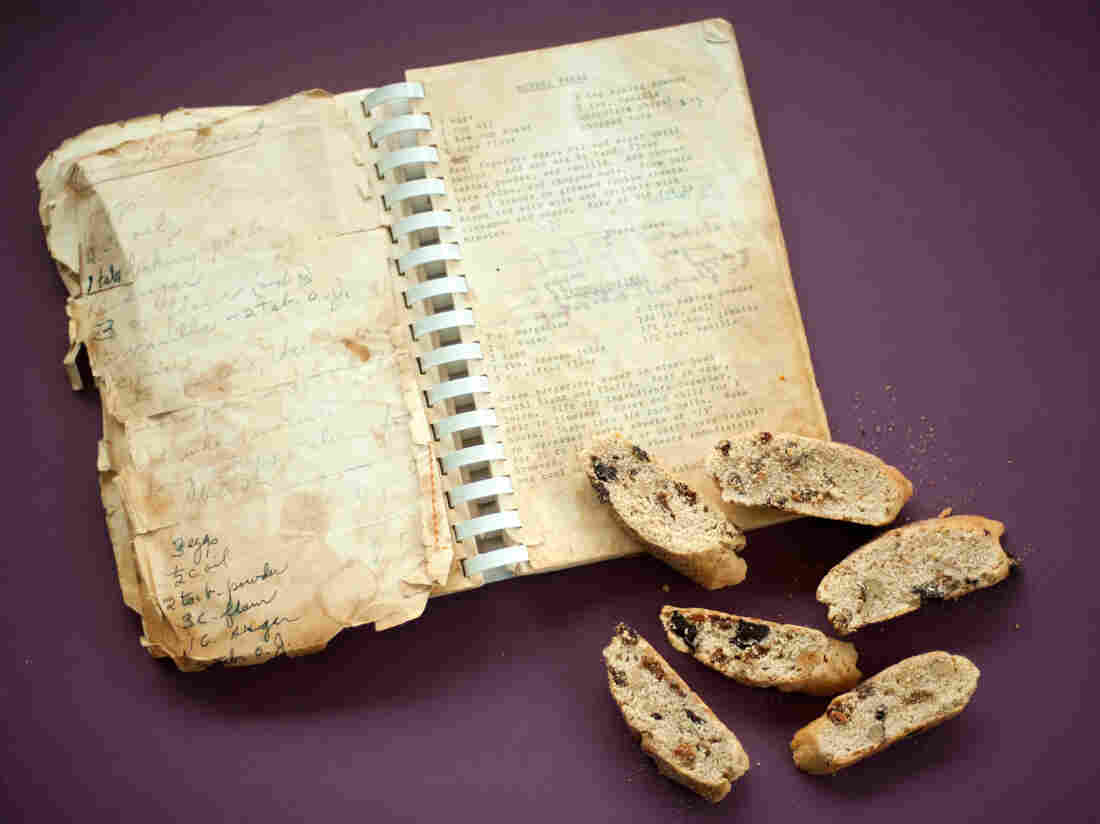 After his mother-in-law's death, NPR's Marc Silver found her go-to cookbook, filled with her copious annotations to recipes. He used it to piece together her take on mandelbread, a Jewish version of biscotti, and other holiday favorites. Akash Ghai/NPR hide caption 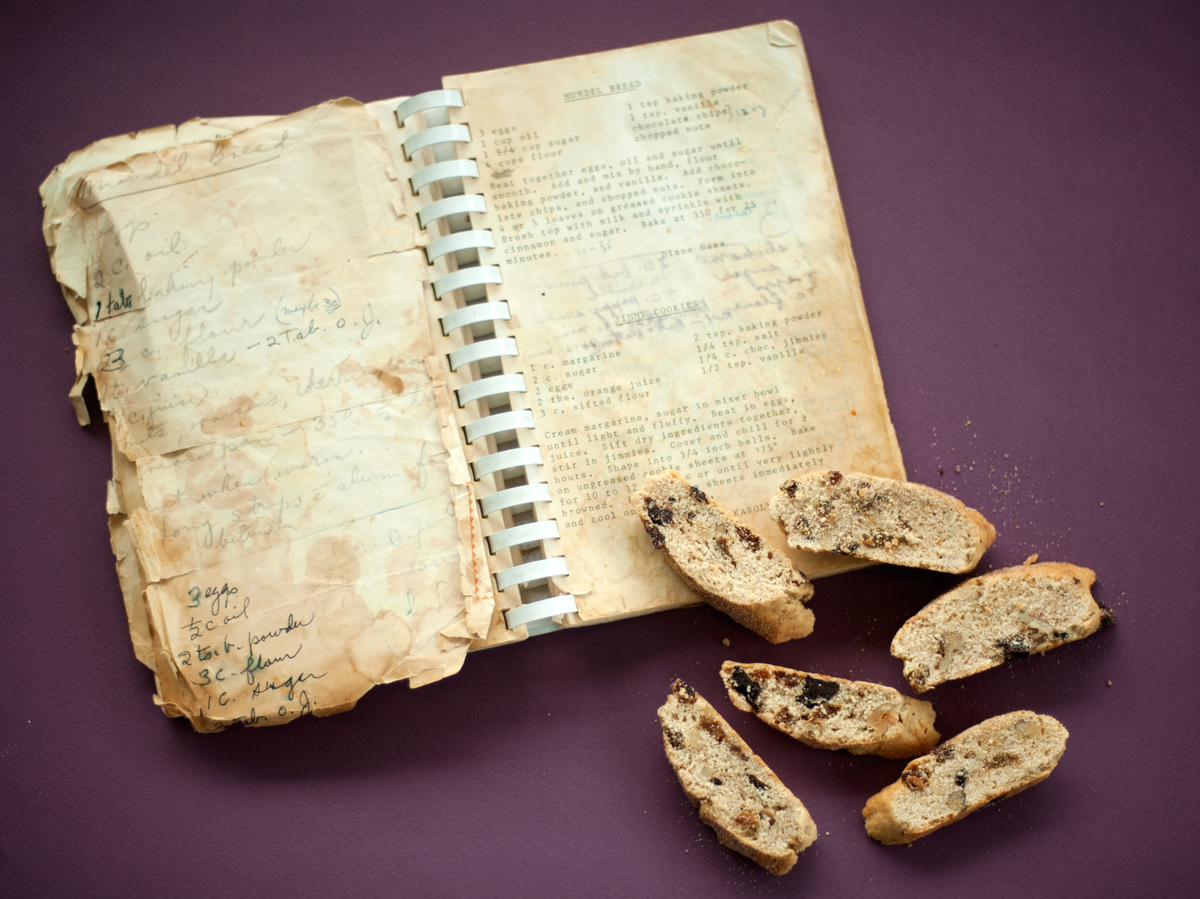 After his mother-in-law's death, NPR's Marc Silver found her go-to cookbook, filled with her copious annotations to recipes. He used it to piece together her take on mandelbread, a Jewish version of biscotti, and other holiday favorites.

We're welcoming an unseen guest to our Jewish holiday celebrations this fall: My mother-in-law, Jan Dale, who died in 2005.

Since her passing, I've tried to keep Jan a presence at our festive meals with my attempts to bake some of her favorite recipes. For instance, to mark the start of Yom Kippur Tuesday night, I've made a batch of Jan's crumbly, cinnamon-scented mandelbread — that's Yiddish for "almond bread," a twice-baked cookie that's the Jewish version of biscotti.

But getting here has taken a bit of detective work.

While she was alive, our family relished Jan's holiday baking: her poppy seed cookies (a perfect blend of crisp and chewy), her moist honey cake. But I never thought to ask for her recipes. So when we said goodbye to Jan, it seemed we'd also have to say goodbye to her take on these treats.

A few days after Jan died, we went through her possessions and found her go-to cookbook, stained and dog-eared: Our Favorites ... with Cocktails and Coffee. The spiral-bound book contains recipes from women in her chapter of Hadassah, a Jewish women's volunteer group. It appears to have been printed in 1980, but it's redolent of the 1950s, when Jan and many of her Hadassah comrades would have been raising families and cooking dinner every night.

I felt as if I'd found the Holy Grail.

As I read the cookbook, I could see that Jan was not just a follow-the-recipe baker. The book is filled with notes in her Palmer-perfect handwriting, as well as alternative versions of recipes on slips of paper. But which version did she prefer? 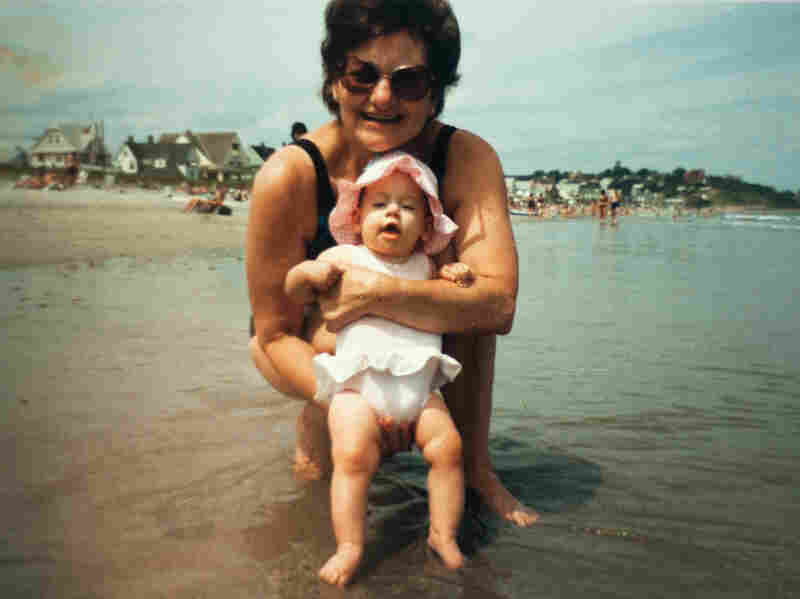 The author's mother-in-law, Jan Dale, pictured with her granddaughter Maya in the late '80s. (Maya got married this year and baked all her wedding cakes herself.) Courtesy of Marc Silver hide caption 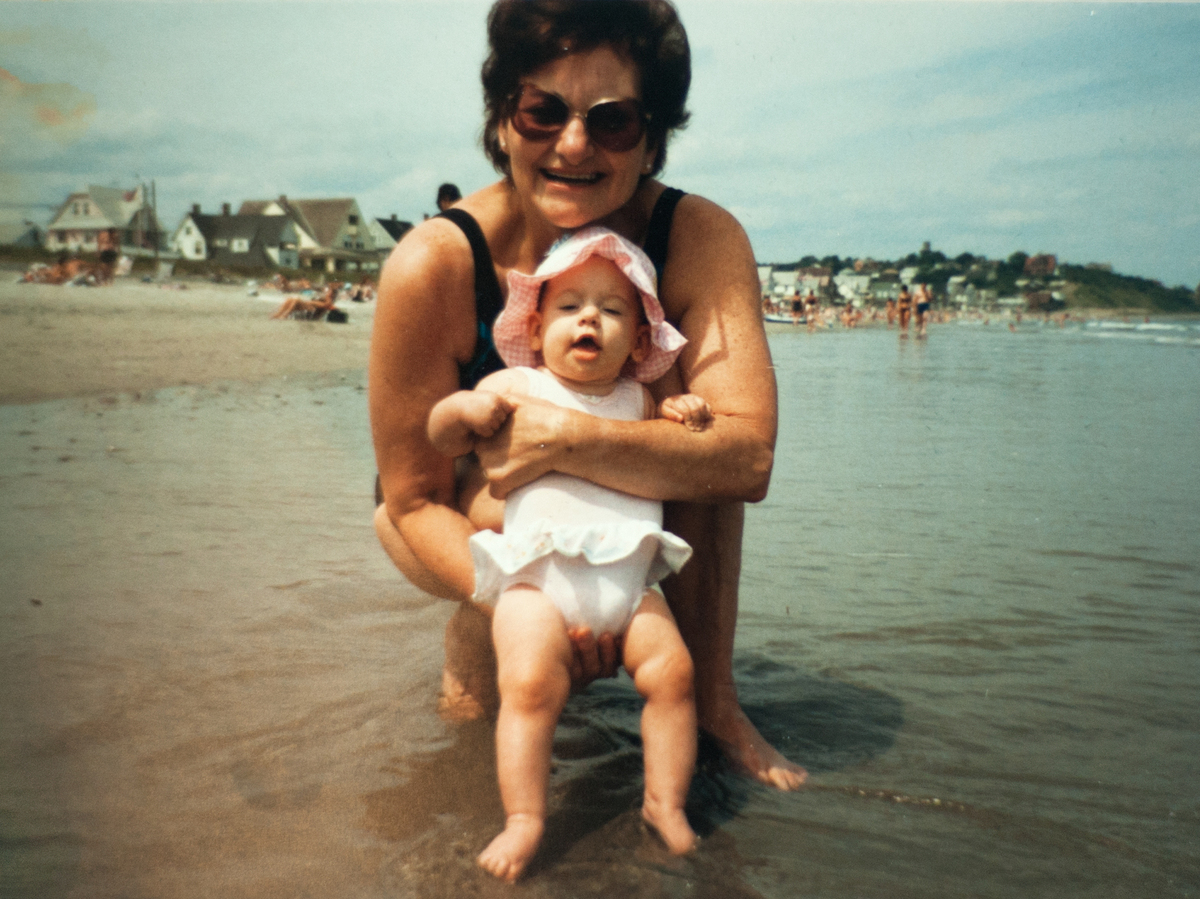 The author's mother-in-law, Jan Dale, pictured with her granddaughter Maya in the late '80s. (Maya got married this year and baked all her wedding cakes herself.)

That was just one of the questions I had. "Why did you change the oil quantity from one cup to half a cup in the mandelbread?" I wondered. (Probably she'd answer, "Who needs all that oil?") Why did you write "wash and drain" on the poppy seed recipe, then cross the words out? And then there were the missing elements — like a pan size for the honey cake. She most likely had a cake pan she'd always use, but that sure didn't help me.

Through trial and error, and by consulting with other cooks, I solved some of the mysteries. For example, Jan called for "one tablespoon of baking powder" for the mandelbread. When I took a batch to my mother, she took one bite and said, "Too metallic — how much baking powder did you use?" With her guidance, I reduced the amount to two teaspoons (although I'll never know why Jan called for the larger amount).

Rose Levy Beranbaum, author of The Cake Bible and a baking blogger, helped solve the "wash and drain" instruction for poppy seeds. Apparently, folks used to think that washing poppy seeds would remove the bitterness associated with them. But in fact, poppy seeds quickly turn rancid once they're opened, and washing won't help.

The solution, says Beranbaum, is to store poppy seeds in the freezer for freshness. That would have appealed to Jan. I figure someone told her about washing seeds, she wrote the instruction down, then thought, "Who needs that extra step?" (she was a big believer in less is more) and crossed it out.

I love piecing back together Jan's recipes. I feel as if I'm having a conversation with my mother-in-law about something both of us love — cooking.

As for the desserts I make during the holiday season, they definitely bring Jan back to join us. When my wife tasted the mandelbread last night, tears came to her eyes: "It's my mother's recipe," she said wistfully.

But I can't compete with Jan's prowess. When I've asked my kids to judge my mandelbread attempts over the years, they've declared, "They taste just like Nana's, only not quite as good."

I guess there are some ingredients only a grandmother can bring into the mix.

Marc Silver is the senior editor and host of NPR's Goats and Soda blog. A version of this essay was published in 2006.

"You'll learn how your mother-in-law came up with the recipe she liked if you try the different versions," advised cookbook author Pam Anderson. So I did. And I learned. The version that called for one-third of a cup of orange juice made the dough a little too crumbly. But the following recipe is pretty darn close to Jan's excellent mandelbread (or "mandel," as she called it).

Jan did not include the instruction to bake the cookies a second time after slicing the loaf. I'm sure she would say, "Too much trouble." The result is a softer cookie that my kids like a lot. But I prefer a slightly crisper cookie, so I do a second bake, either at 250 degrees or 325 degrees for 20 minutes (flipping the slices over after 10 minutes.)

The temperature depends on how toasty you'd like the final cookie to be. One final note: Jan sometimes used maraschino cherries in the recipe. I decided to substitute dried cherries, and while they didn't add much color to the final product, they do provide a nice burst of chewy cherry flavor.

1 cup sliced almonds or chopped nuts (I used walnuts, which is what Jan used to do)

By hand or mixer, beat the eggs, oil and sugar into a yellow, creamy-looking mixture.

Whisk in vanilla and juice.

Combine dry ingredients and mix in by hand. (Note: I substitute 1 1/2 cups of King Arthur's mild-tasting white wheat flour for regular flour — it adds fiber but doesn't alter the taste.) The dough should be firm and a little stiff, with the consistency of Play-Doh. If dough is too moist to handle, add up to 1/2 cup more flour.

Knead in almonds and dried fruit (golden raisins or cherries get my vote) and/or chocolate chips.

Knead into a ball. Slice the ball into four wedges.

Roll each wedge into a rope about 12-14 inches long, 1 inch in diameter.

Place two ropes on each sheet, about 4 inches apart. Sprinkle each rope of dough with cinnamon-sugar mixture.

Bake for half an hour. Remove and let cool.

Reduce oven heat to 325 degrees or 250 degrees, depending on your crispness preference.

When the loaves are cool, slice on a diagonal. You'll get about a dozen slices per loaf.

Lay the slices flat on the foil of the baking pan. Sprinkle again with cinnamon-sugar.

Return to oven for the second baking of 20 minutes. (Flip slices after 10 minutes.) Or, if like my mother-in-law, you don't want to bother, just dig in. They're delicious.

Jan would store her mandelbread slices in a tin, on sheets of aluminum foil. That's how she brought them to our house when she'd visit.