Accessibility links
See The Pope On A Slice Of Toast? It's Perfectly Normal, Really : The Salt From Jesus on a fish stick to the Virgin Mary on a grilled cheese, lots of people report seeing the faces of religious figures in their food. It turns out, our brains may be wired to work this way. 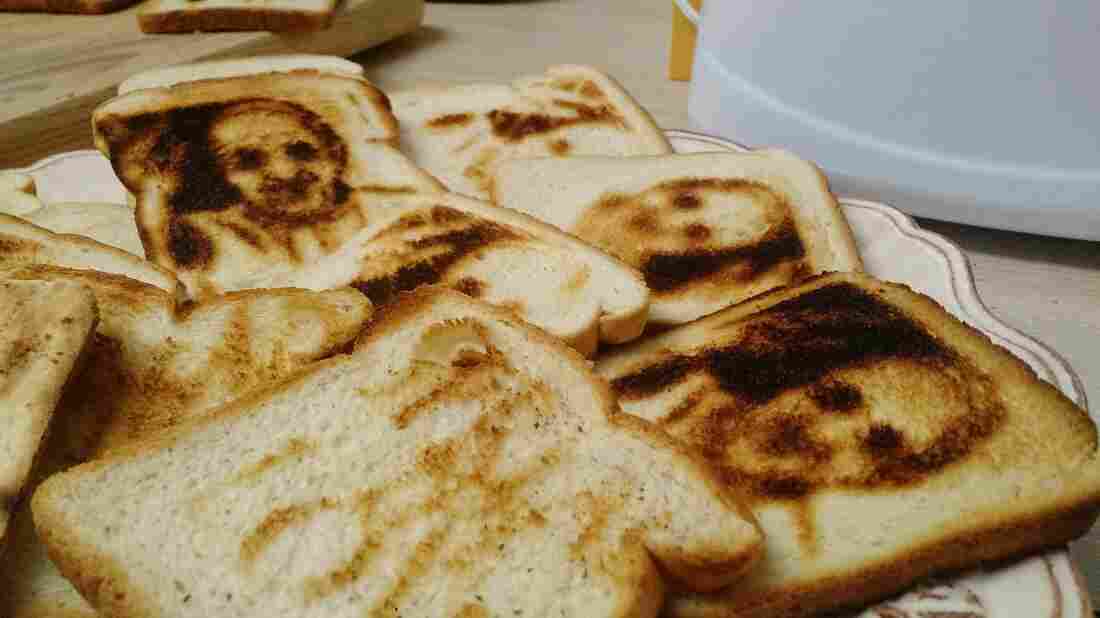 The image of Pope Francis ended up on these slices of toast thanks to a special toaster with metal stencillike inserts. But in most cases where people report seeing faces in their food, their brain is behind the illusion. Katie Colaneri/WHYY hide caption 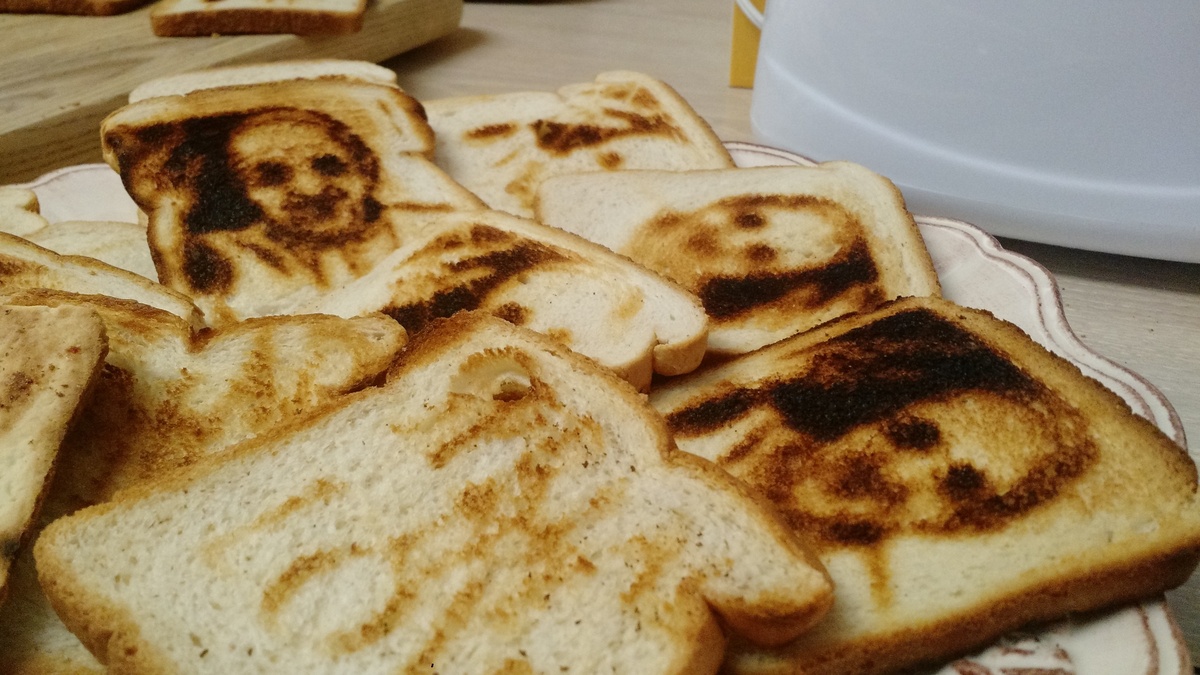 The image of Pope Francis ended up on these slices of toast thanks to a special toaster with metal stencillike inserts. But in most cases where people report seeing faces in their food, their brain is behind the illusion.

The U.S. is in a frenzy over Pope Francis. And with the pontiff visiting Philadelphia on Saturday, vendors there are ready with commemorative memorabilia – including, as we've reported, a toaster that burns the pontiff's image onto bread.

That's all tongue in cheek, of course, but reports of people spotting religious figures in their food are very real. Plenty of people swear they've seen Jesus in a fish stick or the Virgin Mary on a slice of toast.

The phenomenon of discerning a clear image or pattern where it does not exist is known as pareidolia. And while you might be tempted to wonder what's wrong with folks who encounter such apparitions, it's perfectly normal for brains to perceive these illusory faces, explains Kang Lee, a developmental psychologist at the University of Toronto. 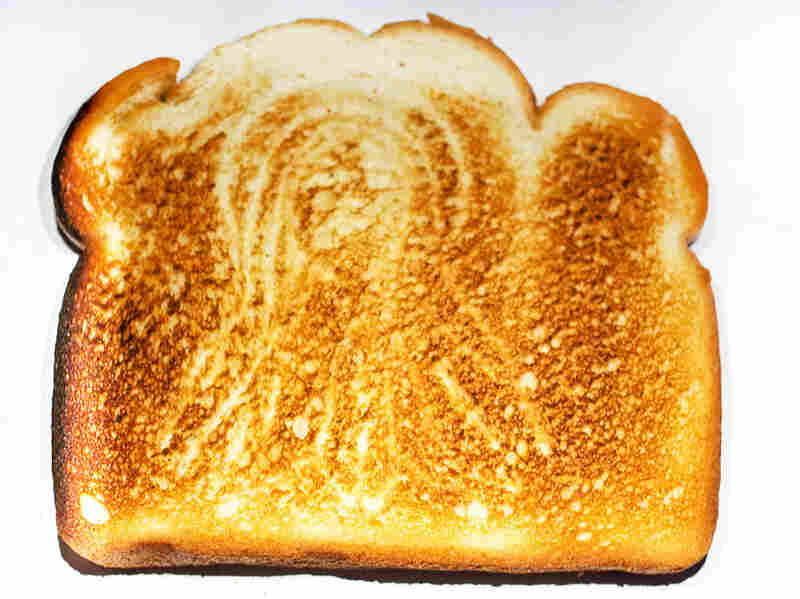 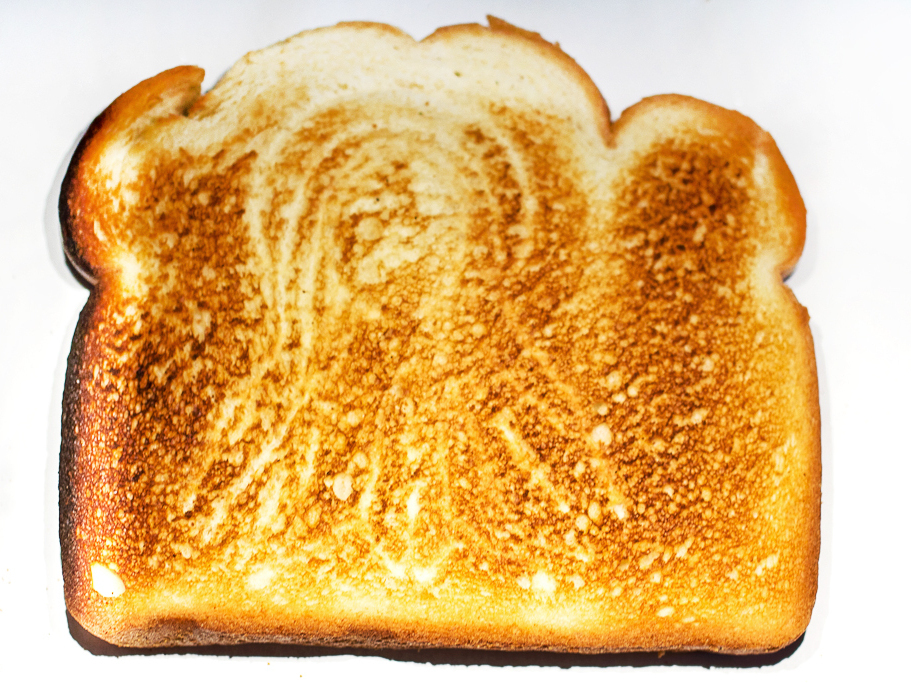 The Virgin Mary on toast?

"It turns out that face pareidolia affects the parts of our brain that are responsive to real faces," Lee tells The Salt, adding, "In other words, if you are experiencing such a phenomenon, nothing is wrong with your brain."

Brain scans have shown that when we look at a face, a part of the brain called the fusiform face area lights up. But Lee and his colleagues have found that this area of the brain is also activated when people think they see faces that aren't there, they reported last year in the journal Cortex.

The researchers used functional MRI scans to monitor the brain activity of 20 volunteers. They presented the subjects with "noise images" that contained no faces (the digital equivalent of film grain or visual distortion) but told them that the images did in fact contain faces and, sometimes, letters. According to Lee, most participants reported having seen whatever they were told they would see as much as 37 percent of the time.

This suggests it's fairly easy to induce face pareidolia, and that we humans may be predisposed to interpret varying shapes and contours as faces. Indeed, there's lots of evidence that our brains are hardwired for facial recognition. So why not detect faces in things like clouds, cigarette smoke, and the occasional pancake?

While seeing faces in food may be perfectly ordinary, some have nonetheless managed to turn the phenomena into lucrative business propositions. One woman sold a grilled cheese sandwich with the likeness of the Virgin Mary for $28,000 on eBay. That's about the average annual salary for a medical receptionist in New Jersey. 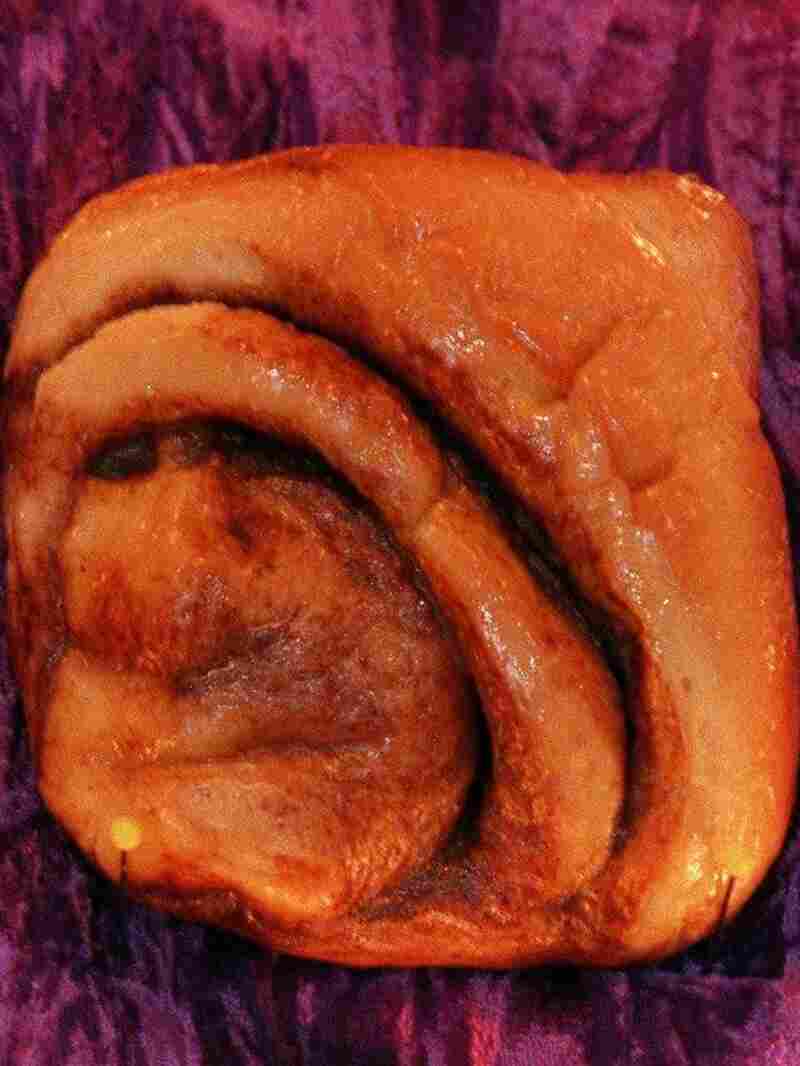 A cinnamon bun, famous for bearing what some perceive as the likeness of Mother Teresa, is seen in an undated file photo. Bill Steber/Associated Press hide caption 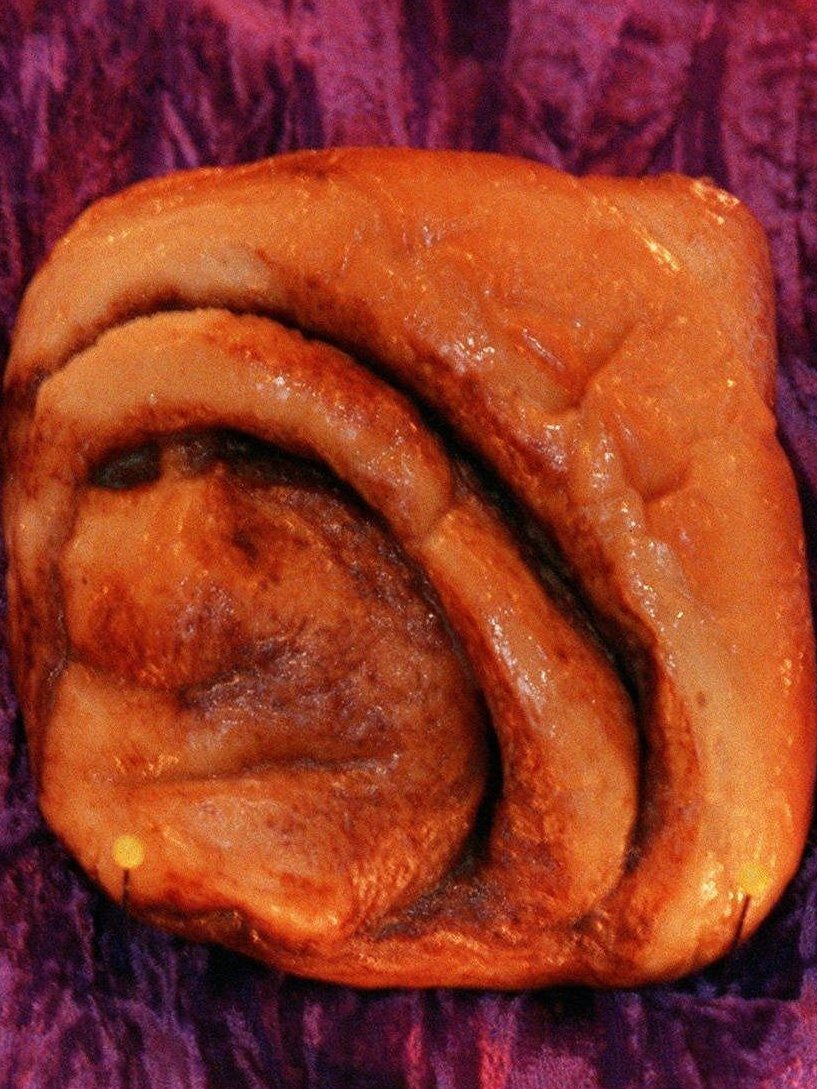 A cinnamon bun, famous for bearing what some perceive as the likeness of Mother Teresa, is seen in an undated file photo.

Perhaps one of the most striking cases of face pareidolia dates back to 2010. After he and his roommates had a few beers one evening, Toby Elles decided to cook some bacon. He put it on the stove and fell asleep on the couch. After the room began filling with smoke, he woke in a panic and quickly took the bacon off the burner. To Toby's surprise, a Jesus-like image stared back at him from the frying pan: eyes, nose, mouth, beard, and long, flowing hair. "I'm going to keep it for the rest of my life," Elles told The Telegraph. "Perhaps it can watch over me."

Of course, you don't have to be particularly religious to find God in a meal. But Lee tells us no one has studied whether a person's religiosity will make them more or less likely to have pareidolia, especially involving religious icons. It's something his team is hoping to study in the future.

"I am also interested in seeing whether having a certain personality makes you more likely to experience such illusions," Lee says.