Accessibility links
When Tea Is As Sweet As Soda: Sugary Tea Around The World : The Salt We think of tea as healthful, but from Morocco to Taiwan to the American South versions of it have become so sugar-laden that a regular tea habit might be just as unhealthful as a soda habit. 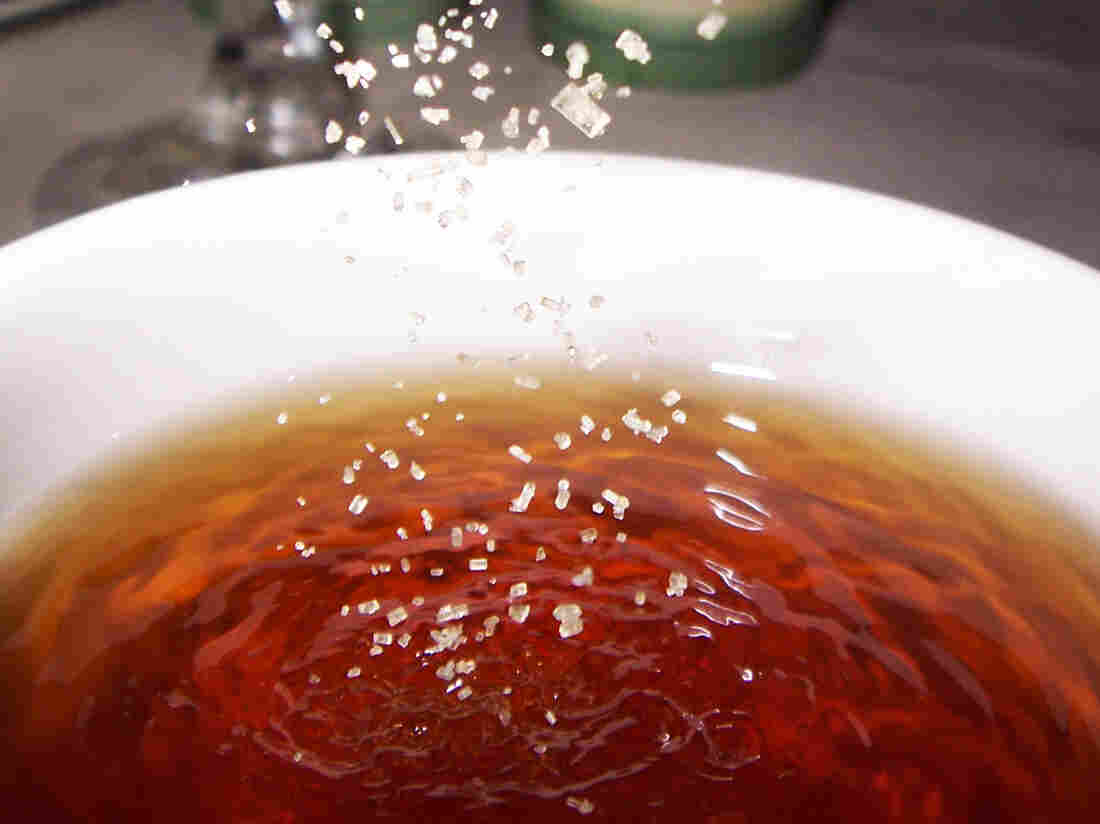 Sugar offsets the bitterness of tea, but have we gone too far in how much we add and how often we drink it? Yat Fai Ooi/Flickr hide caption 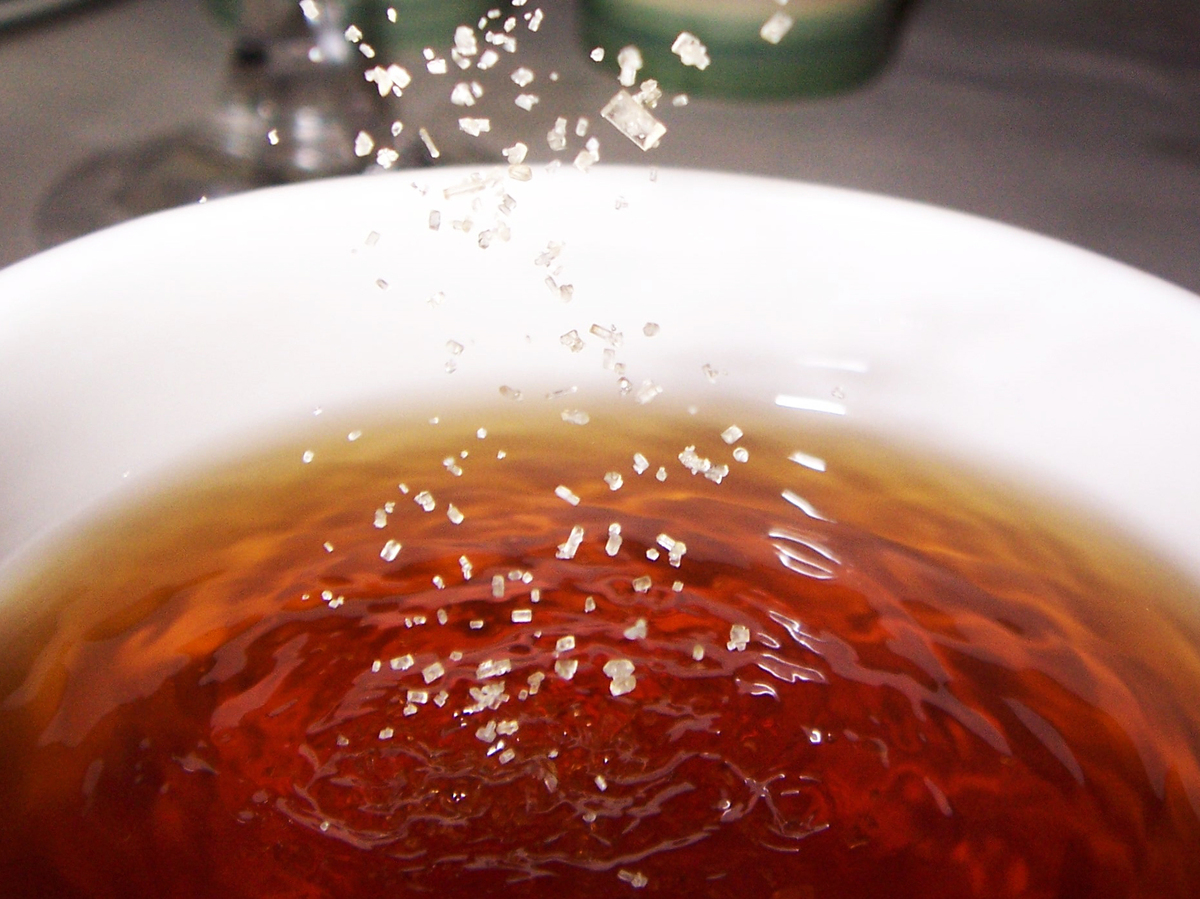 Sugar offsets the bitterness of tea, but have we gone too far in how much we add and how often we drink it?

Sugar and tea have a love story that goes way back.

As The Salt's Maria Godoy has written, they are a "power couple that altered the course of history. It was a marriage shaped by fashion, health fads and global economics," and, of course, the slave trade.

Tea, especially black tea, is bitter. A lot of people decided it tasted better with sugar and made a habit out of adding it.

"I suspect that sugar has always been added to make the strong tea more palatable and also for energy, especially where milk or cream is added, too," Jane Pettigrew, a tea historian in the UK and co-author of The New Tea Companion, tells us. "In Britain during the Industrial Revolution, the poorer classes drank very weak tea, but added milk and sugar for sustenance."

Plenty of other tea lovers around the world concur that sugar adds sustenance and flavor: From Morocco to Taiwan to Germany to Iraq to the Deep South of the U.S., you'll find tea so sweet it'll make you wince if you're not used to it. 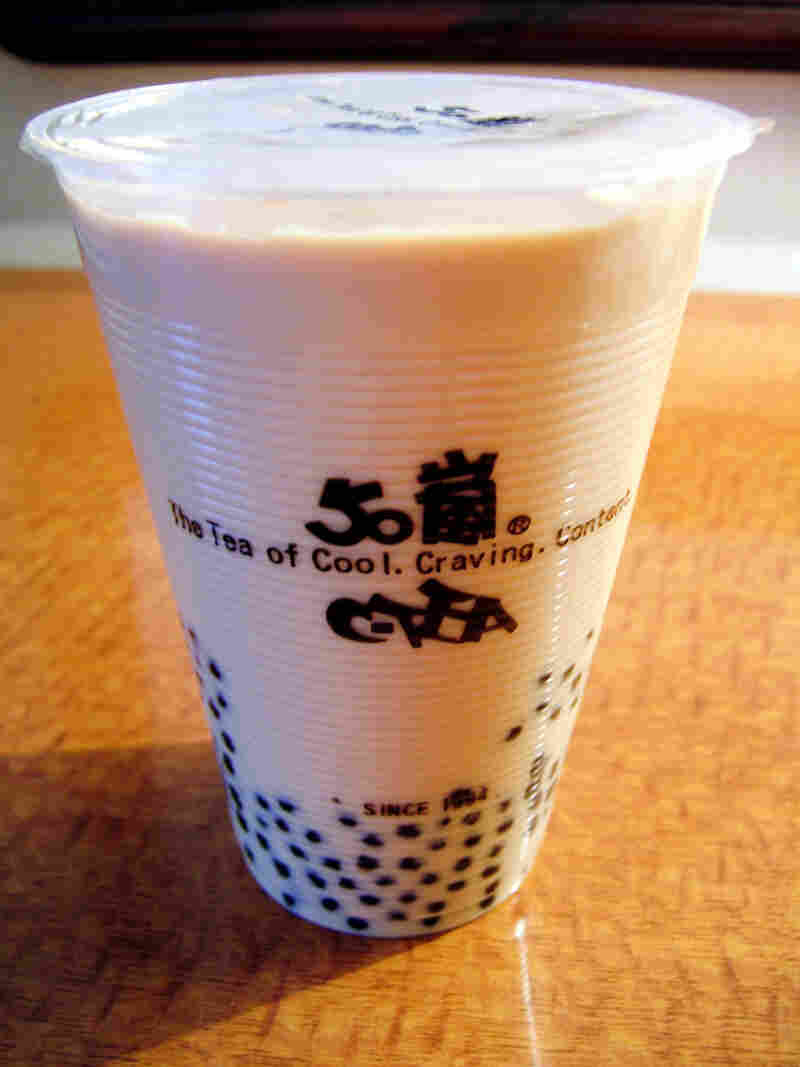 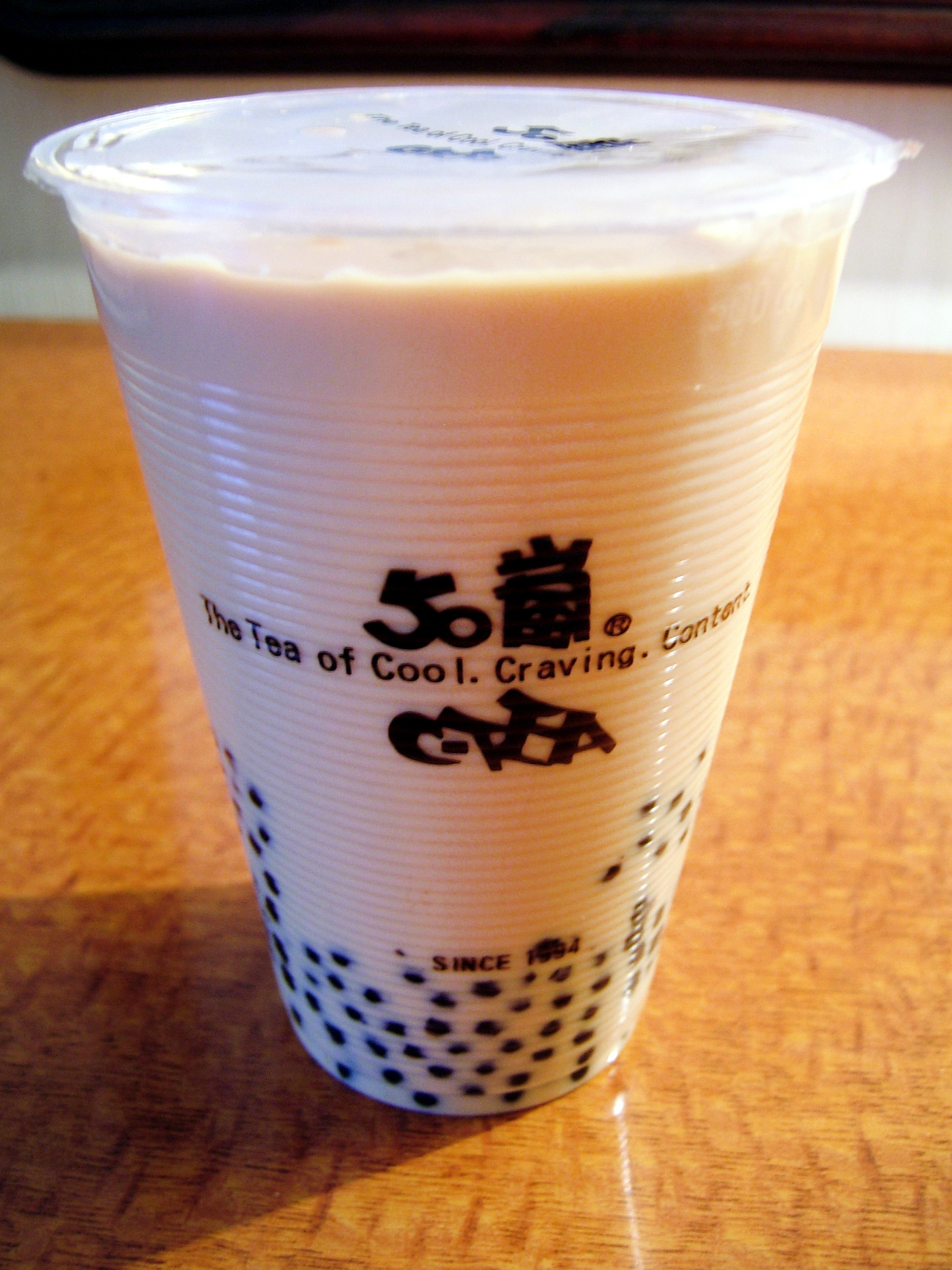 Bubble tea is a popular sweet tea drink that originated in Taiwan.

The trouble is, a lot of us are well-fed and don't need extra sustenance from sugar anymore. And over time, as sugar has become cheaper and more abundant, we've added more and more of it to our tea (and to a lot of other things we consume).

And so tea, which we think of as healthful, even longevity-promoting, has become pretty unhealthful in a lot of places. A 16-ounce grande Starbucks Chai Tea Latte, for example, contains 42 grams of sugar, or 10.5 teaspoons

Rob van Dam, associate professor of medicine at the National University of Singapore, says sugary tea is becoming increasingly popular in Asia. "It's there in the bubble teas, the ice teas, the Starbucks tea lattes – they're all high in sugar. People think, 'I'm not going for a Coke, I'll take an iced tea.' But the difference in sugar content is marginal."

van Dam says all that sugary tea is a big part of why sugar intake in Asia and other tea-loving regions of the world is swiftly climbing. And it doesn't bode well for people's health. "We have seen Western studies showing that sugar-sweetened beverages are associated with a high risk of diabetes and excess weight gain," he says.

But despite the health risks, sugary tea is a beloved ritual around the world. Here's our round-up of just a few of the world's sweetest tea traditions. 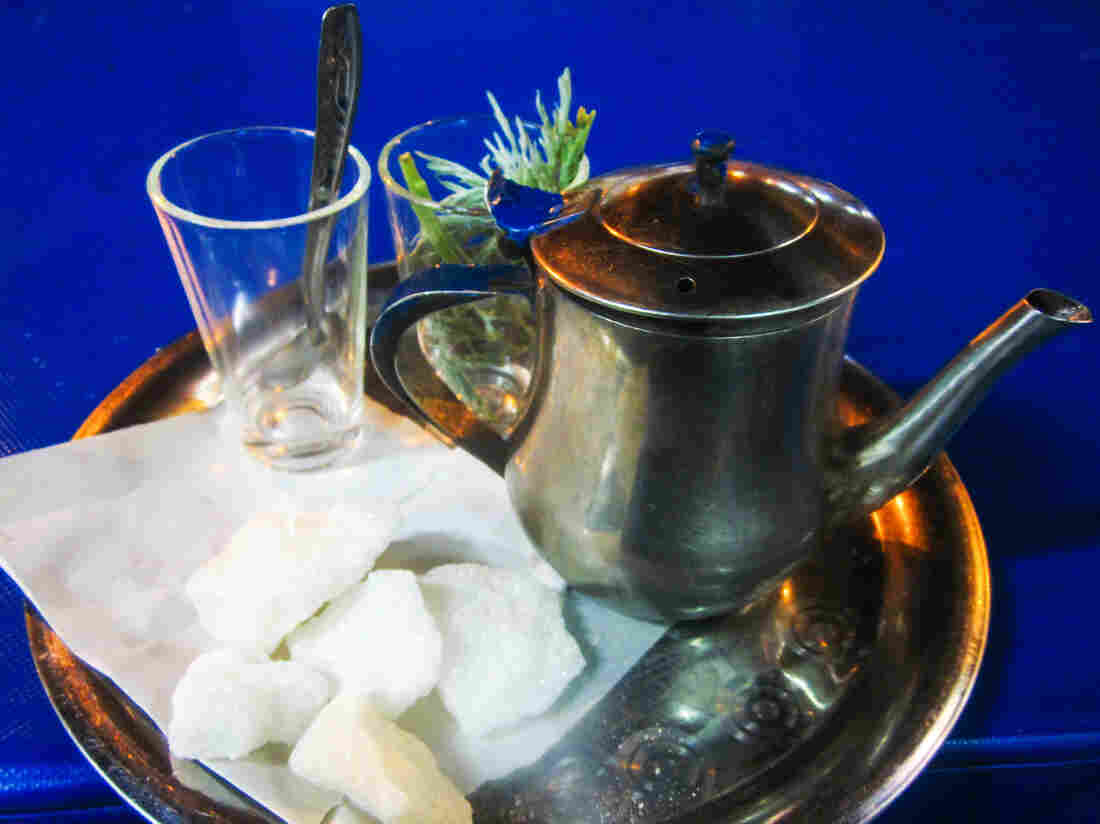 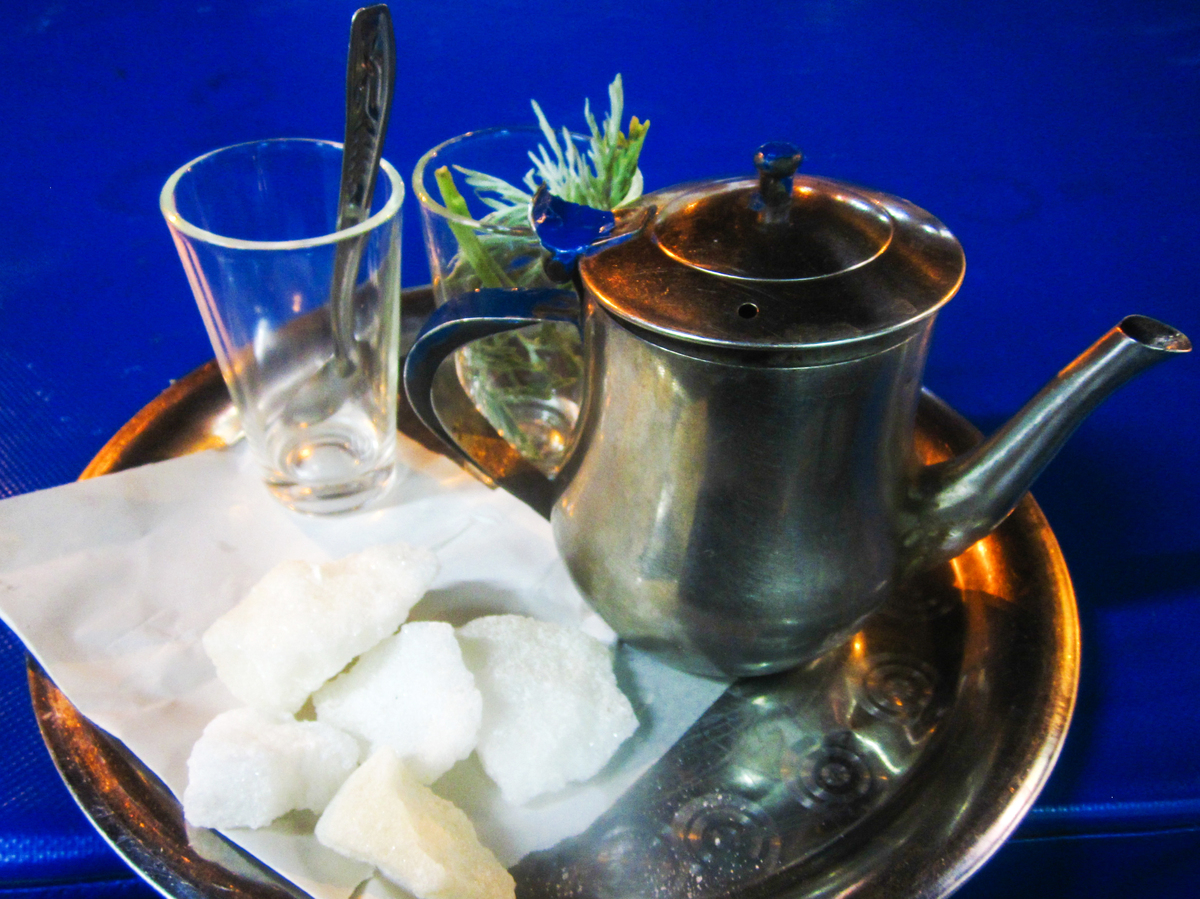 Moroccans and Western Saharans drink their green tea with mint and lots of sugar.

In 2012, I traveled to Western Sahara, a disputed territory of Morocco, with a group of journalists. As I reported then, I was struck by how drinking tea – green tea with fresh mint – was so central to North African culture. But what perhaps most shocked me was the quantity of sugar that went into to each batch: huge chunks, the size of golf balls. And as one local told me, Saharawis will drink tea four times a day, and maybe more if it's a day filled with meetings. That's a lot of sugar. 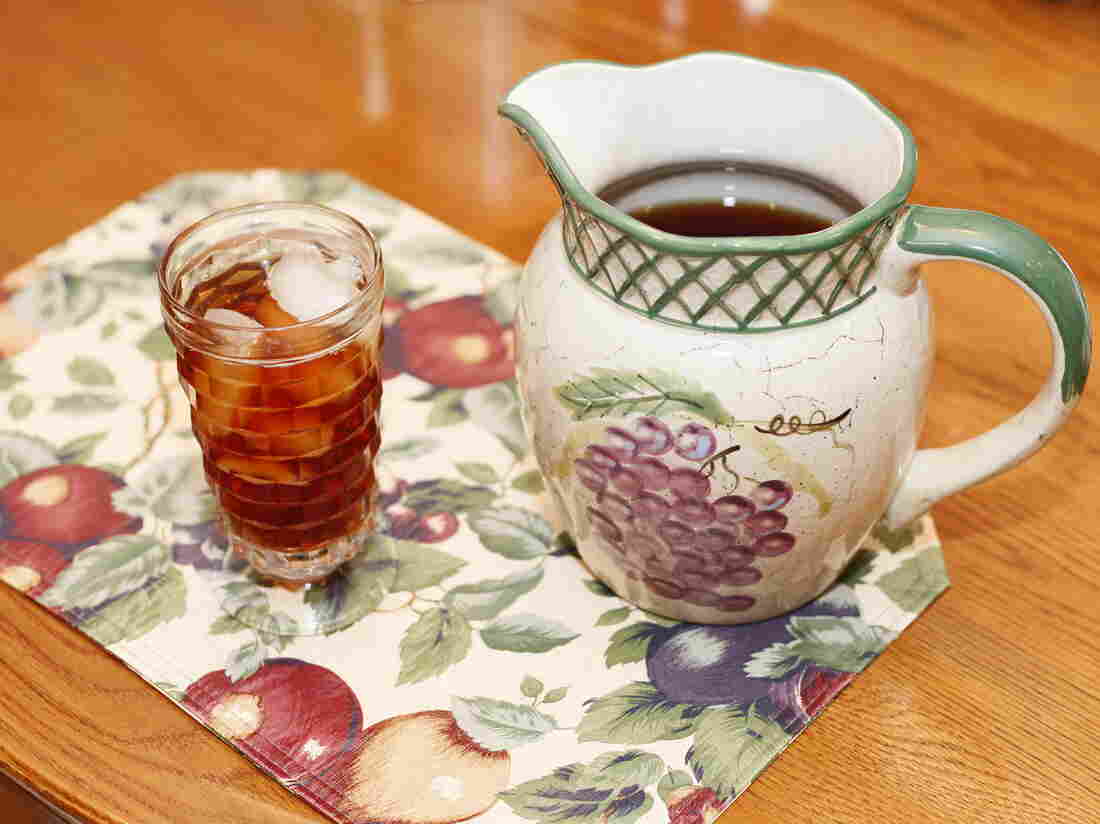 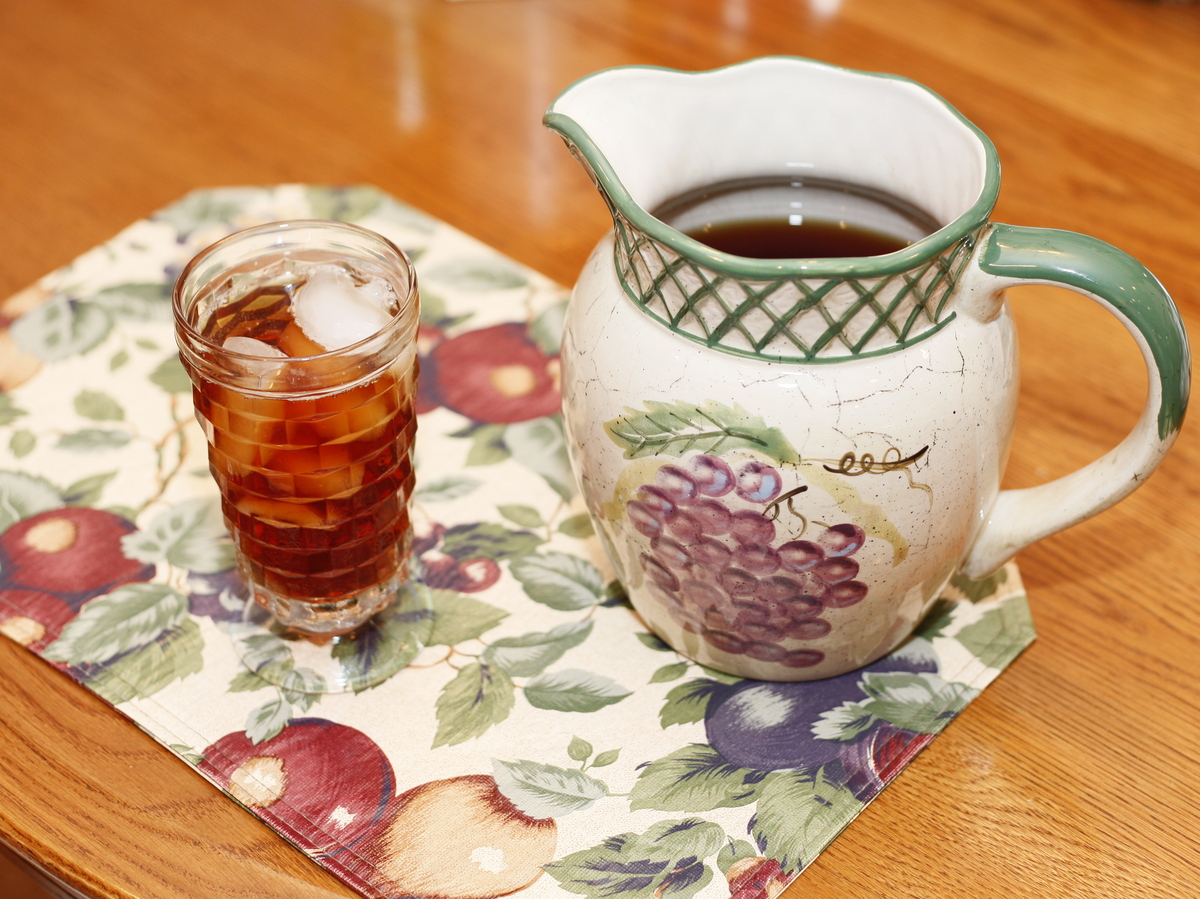 As Georgia native Tracy Thompson once wrote in her book The New Mind of the South, you can define the South as the place where there's sugar in the tea and not in the cornbread.

Enter any given home in the South on a hot afternoon, and there's a pretty good chance you'll be offered an icy glass of tea. If you're accustomed to iced tea made in other parts of the U.S., be warned: This stuff is really, really sweet. (Some recipes call for a quarter cup of sugar per cup of water.)

As iconic as Southern sweet tea is, it's also become a marker of unhealthy dietary patterns in the region. Suzanne Judd is an associate professor in the School of Public Health at the University of Alabama at Birmingham who has documented a strong link between the Southern-style diet (fried food, processed meat and sweet tea) and risk of stroke. In small towns in the south, Judd says, sweet tea is the default beverage. And it's really hard to wean people off it.

"It's not soda that's the devil down here, it's sweet tea," she says. "There's no way of knowing how much sugar goes in it — they boil it to super concentrate the sugar." 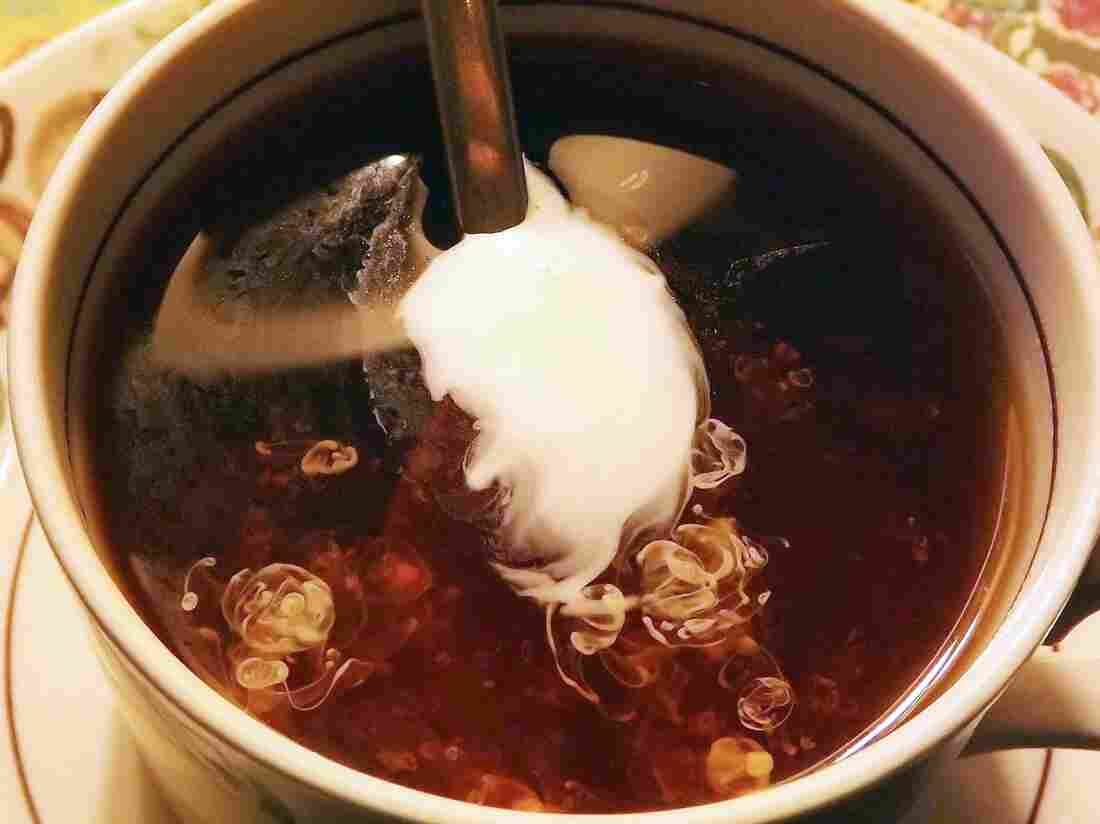 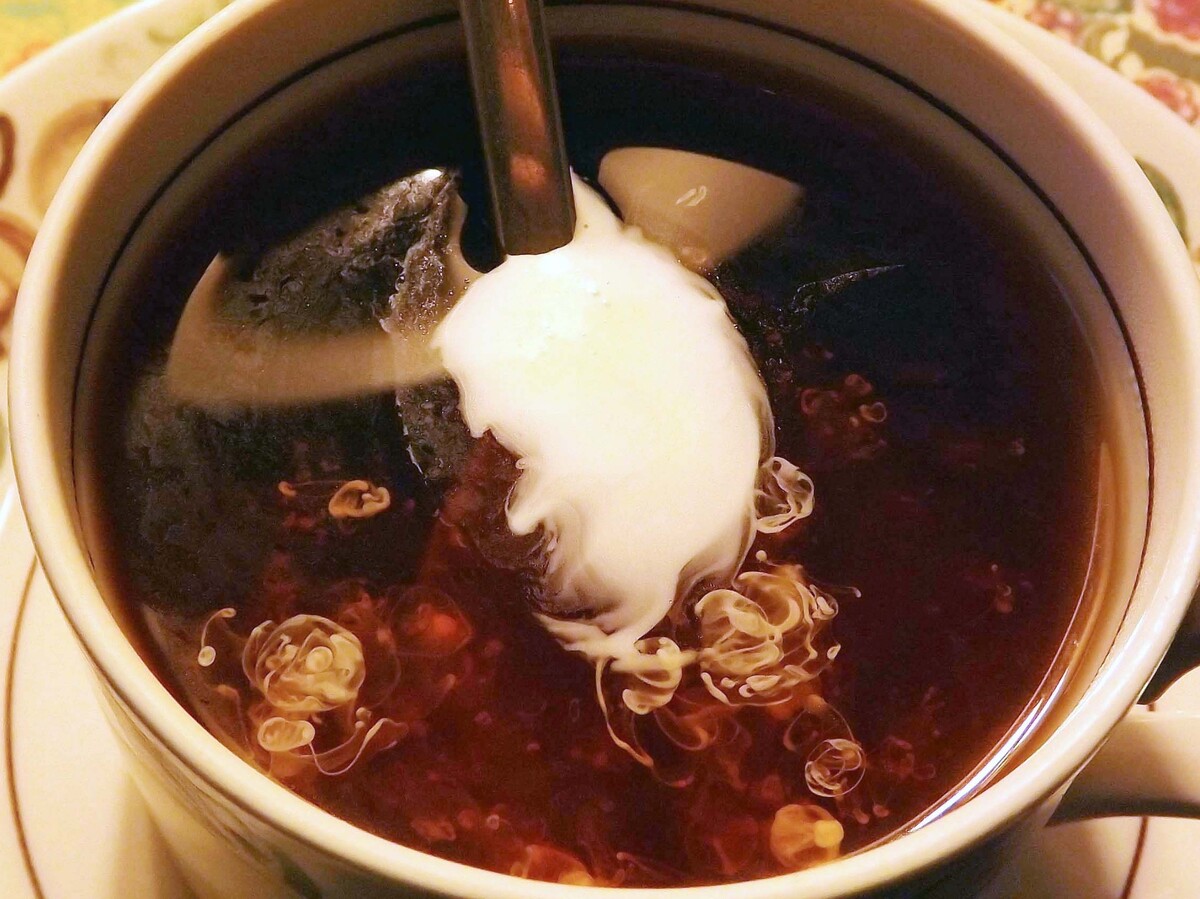 The people of East Frisia, Germany take their tea seriously, too. They prefer it strong and black with thick cream and rock sugar in the bottom of the cup, which are never stirred in, says Pettigew. According to one German tea company,

"The locals refer to tea made this way with the trilling alliteration 'n lekker Koppke Tee" (a delicious cup of tea). The flavor is malty, strong, spicy, and highly aromatic. Protocol demands that the tea must never be stirred in the cup, because the true sensory experience comes in three layers: first the cream (sky), then the tea infusion (water) and finally the sweetness of the sugar (land)."

If you happen to go to this region, you can visit the East Frisian Tea Museum. 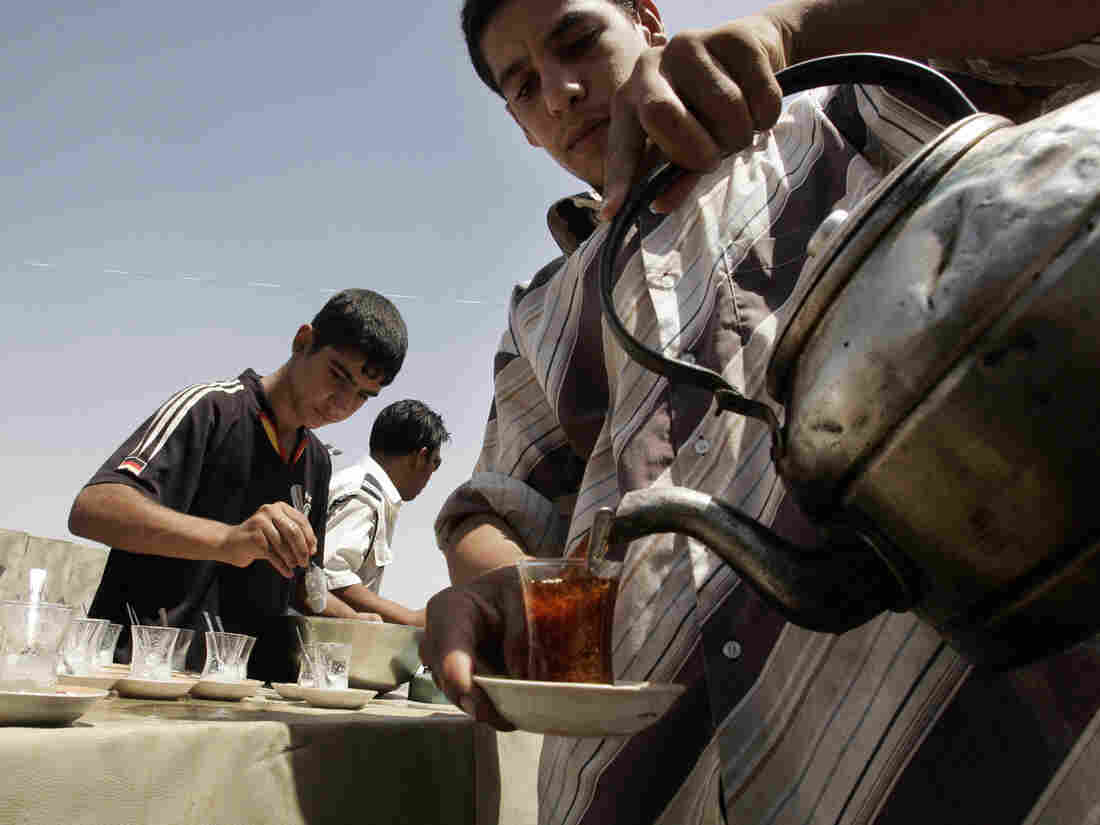 In Iraq, tea is simmered for about 15 minutes until strong and is then poured into glasses . diluted with hot water and sweetened with lots of sugar. Sabah Arar/AFP/Getty Images hide caption 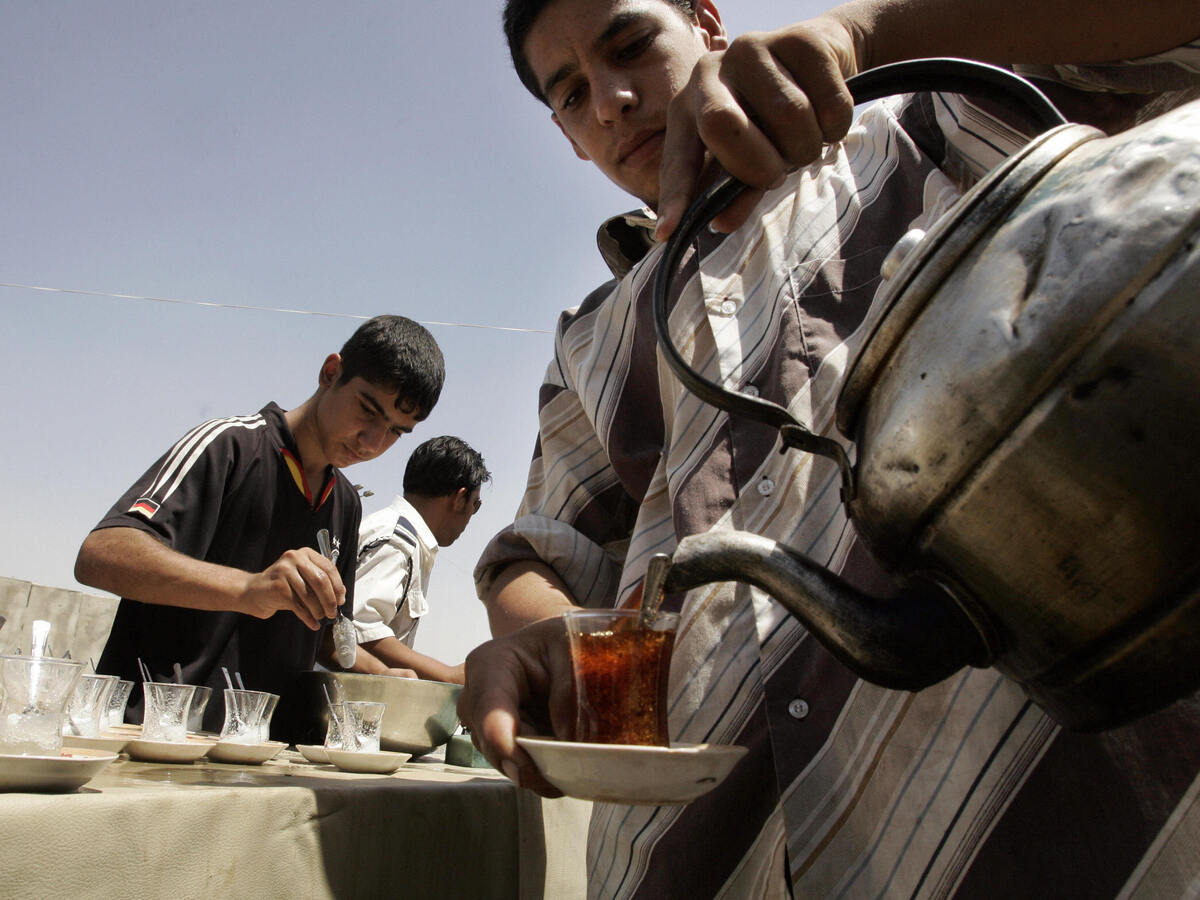 In Iraq, tea is simmered for about 15 minutes until strong and is then poured into glasses . diluted with hot water and sweetened with lots of sugar.

Many Iraqis simmer their tea for about 15 minutes until it's very strong. Then, says Pettigrew, they pour it into glasses with sugar and dilute it with hot water. "A glass of sweet tea is handed to a guest with the sugar undissolved in the bottom of the glass," she says.

According to The Iraqi Family Cookbook, extra sugar cubes are sometimes served on the side.