Accessibility links
New Dietary Guidelines Will Not Include Sustainability Goal : The Salt A government-appointed panel wanted the federal government's 2015 nutrition advice to consider a food's environmental impact. But the Cabinet secretaries with final authority say it won't happen. 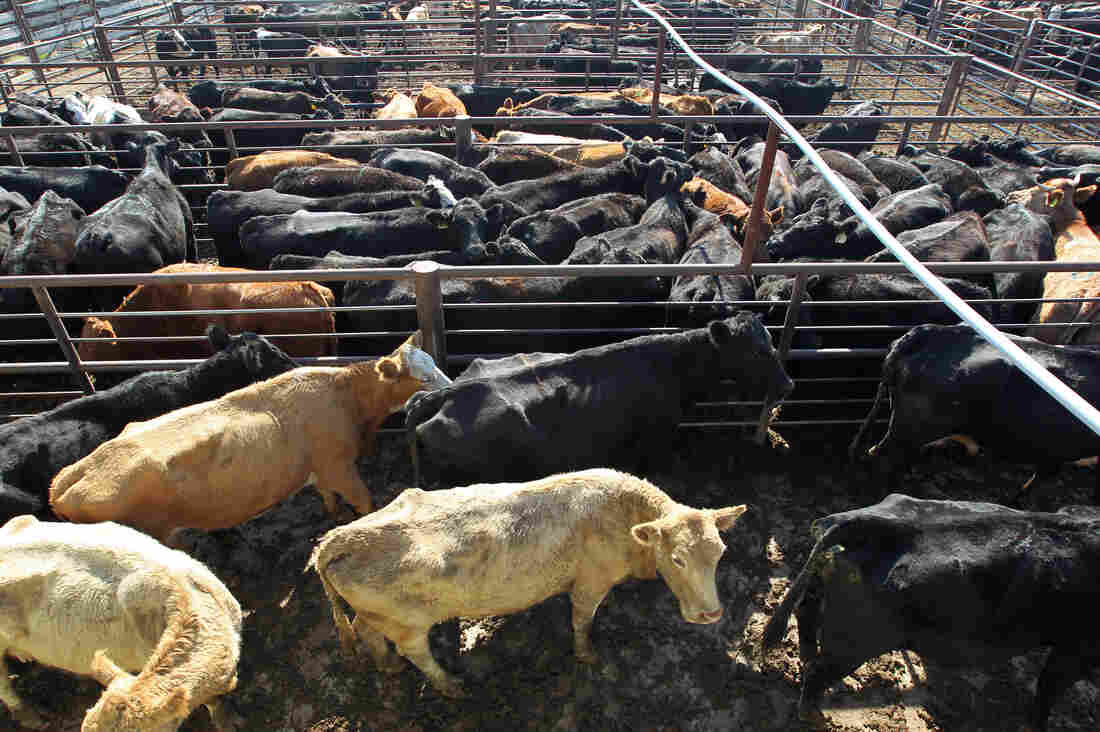 The debate about sustainable diets has focused on meat production, which requires lots of land and water to grow grain to feed livestock. It also contributes to methane emissions. But the Cabinet secretaries with final authority say the 2015 dietary guidelines won't include sustainability goals. David McNew/Getty Images hide caption 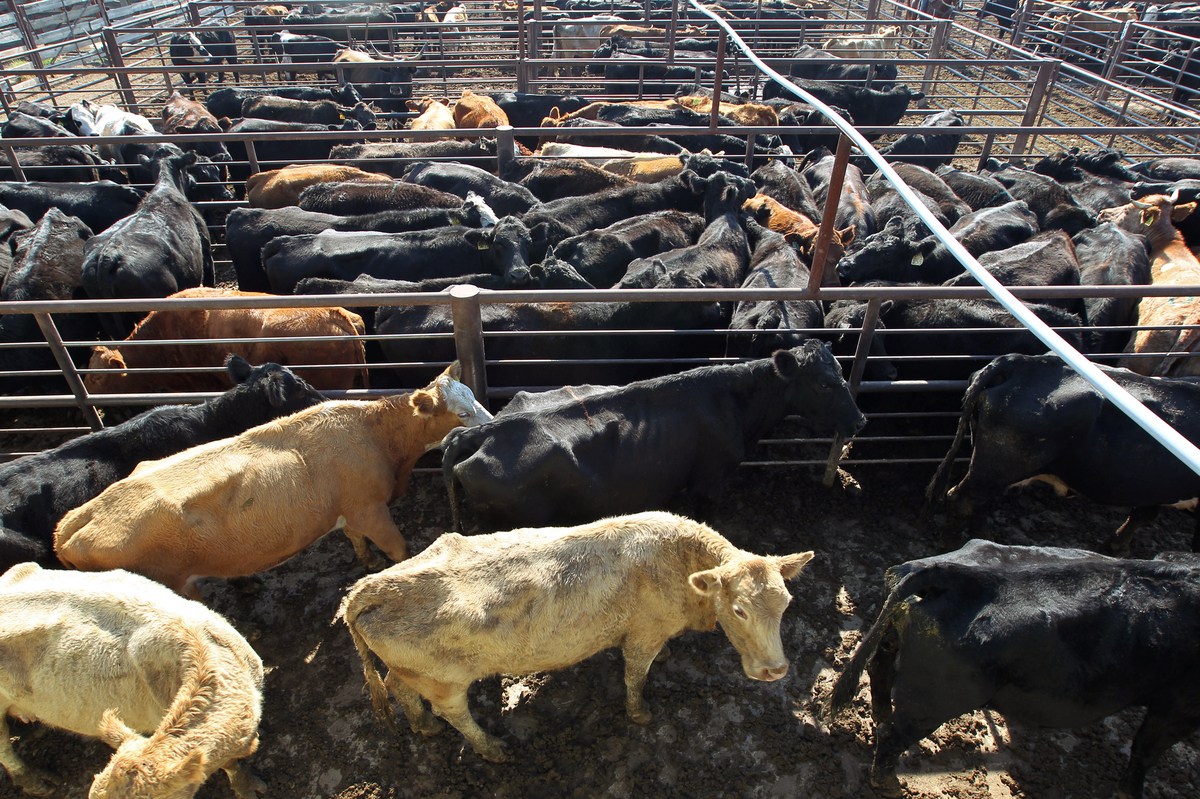 The debate about sustainable diets has focused on meat production, which requires lots of land and water to grow grain to feed livestock. It also contributes to methane emissions. But the Cabinet secretaries with final authority say the 2015 dietary guidelines won't include sustainability goals.

When it comes to eating well, should we consider the health of both our bodies and the planet?

Earlier this year, as we reported, the Dietary Guidelines Advisory Committee concluded that a diet rich in plant-based foods promotes good health — and is also more environmentally sustainable. And, for the first time, the panel recommended that food system sustainability be incorporated into the federal government's dietary advice.

But, it turns out, the idea of marrying sustainability guidance with nutrition advice proved to be very controversial.

And now, President Obama's two Cabinet secretaries who will oversee the writing of the guidelines say they will not include the goal of sustainability.

"We will remain within the scope of our mandate ... which is to provide nutritional and dietary information," write U.S. Department of Agriculture Secretary Tom Vilsack and Sylvia Burwell, secretary of Health and Human Services, in a joint statement.

The two secretaries went on to say that "we do not believe that the 2015 DGAs [Dietary Guidelines for Americans] are the appropriate vehicle for this important policy conversation about sustainability."

The statement came just one day in advance of a much-anticipated congressional hearing. Secretaries Vilsack and Burwell are scheduled to testify before the House Agriculture Committee on Wednesday morning on the topic of the dietary guidelines.

Advocates have been pushing for inclusion of sustainability goals. The consulting group Food Minds analyzed 26,643 written, public comments submitted to the federal government on the topic of the dietary guidelines. They found that write-in campaigns by the advocacy groups Friends of the Earth, Food Democracy Now and My Plate, My Planet were the top three sources of comments.

Last week, in an editorial published in Science magazine, Kathleen Merrigan of George Washington University and a group of co-authors wrote that adopting a reference to sustainability in the dietary guidelines would "sanction and elevate the discussion of sustainable diets."

Merrigan argues that "by acknowledging benefits of sustainability, the government would open itself up to greater demand for sustainability investments and would signal to consumers that such foods are preferred."

The debate about sustainable diets has focused on meat production. As we've reported, meat production uses lots of land and water to grow grain to feed livestock. It also contributes to methane emissions.

"There are a lot of complex issues around livestock production that suggest — quite strongly — that we need to reduce meat consumption for sustainability reasons," Merrigan told us.

Other foods also have an environmental footprint that we should not ignore. Take, for instance, almonds.

"It takes up to 2.8 liters of water to produce a single 'heart-healthy' almond," Merrigan and company write in the editorial.

"With 80 percent of the world's almonds growing in drought-stricken California, should consumers be advised to limit almond consumption and consider alternatives that consume fewer resources?" Merrigan and her co-authors ask.

The Almond Board of California sent NPR its response Wednesday morning:

"Almond growers have reduced by 33 percent the amount of water they use per pound of almonds grown in the past 20 years," writes Carissa Sauer, communications manager for the industry group, in a statement. "These days, about 70 percent of almond orchards use water-efficient micro-irrigation. And each year we continue to make more progress in this area."

The meat industry has opposed the idea of including sustainability in the dietary guidelines. "In our view, this is clearly out of scope," Janet Riley of the North American Meat Institute told us.

She says experts need a more complete understanding of how food production impacts the environment.

"If you compare 10 pounds of apples and 10 pounds of meat, the meat surely has the larger carbon footprint, but it also delivers more nutrition, it nourishes more people longer" in terms of calories and protein, says Riley.

She says, going forward, if sustainability is going to be included in the dietary guidelines, there need to be more data and more experts at the table.

In a statement, the meat institute's president and CEO, Barry Carpenter, praised the secretaries' decision. He called sustainability "an important food issue," but one "outside of the Dietary Guidelines Advisory Committee's scope and expertise."

The dietary guidelines are updated every five years, so it's possible that this debate will continue.

"The compelling science around the need to adjust dietary patterns to ensure long-term food security cannot be ignored," Merrigan told me after the secretaries issued their statement. "If not [in] the 2015 DGA [Dietary Guidelines for Americans], then maybe the 2020 DGAs."