Accessibility links
Could A Mushroom Save The Honeybee? : The Salt The bees that pollinate crops are on the brink of collapse. One big reason why: a virus-carrying mite. Now, researchers think a rare fungi could boost bees' immune system and attack the mite itself. 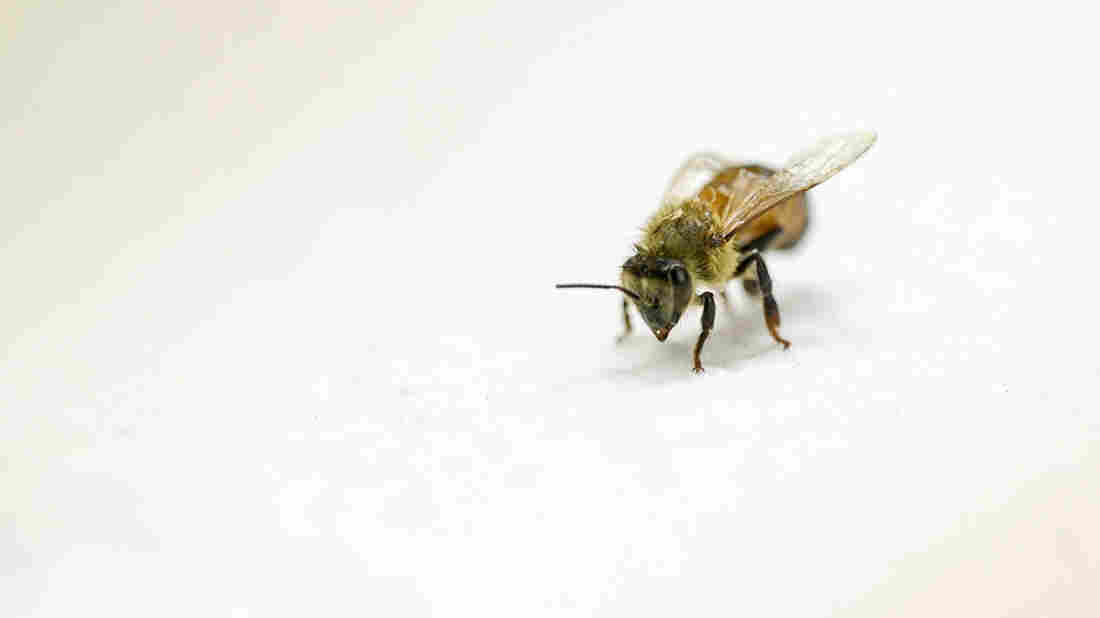 A honeybee is seen on the countertop of entomologist Steve Sheppard's lab at Washington State University. Sheppard is studying whether he can boost honeybees' immunity using liquid extracted from wood-rotting mushrooms. Ken Christensen/Courtesy of EarthFix/KCTS 9 hide caption

Honeybees need a healthy diet of pollen, nectar and water. But at a bee laboratory in eastern Washington state, Steve Sheppard fills their feeding tubes with murky brown liquid from the forest.

His bees are getting a healthy dose of mushroom juice.

"If this does what we hope, it will be truly revolutionary," says Sheppard, who heads the Department of Entomology at Washington State University. "Beekeepers are running out of options."

Commercial honeybees, which pollinate $15 billion worth of crops in the United States annually, have teetered on the brink of collapse for nearly a decade. A third of all bee colonies have died each year since 2006, on average, according to the U.S. Department of Agriculture.

Scientists say the mysterious phenomenon, known as colony collapse disorder, may be the result of at least 60 environmental factors that combine to cripple honeybees — including pesticides, disease, malnutrition, loss of habitat and climate change.

Beekeepers, however, say the honeybee's single greatest threat is a virus-carrying parasite called the varroa mite.

Sheppard has spent decades breeding western honeybees to better tolerate the mite and its viruses. But he hasn't had much success, he says.

Varroa mites have devastated U.S. beehives since the late 1980s, when they arrived here from Asia. In 1996, half of the colonies east of the Mississippi River died due to mite infestations.

The reddish-brown pests, which are no bigger than the head of a pin, invade colonies and multiply rapidly. They hide among bee larvae developing in the honeycomb, feed on infant bee blood and lay several eggs each.

"It would be like having something the size of a pancake feeding on you," Sheppard says.

Honeybees that emerge from the infected hives typically carry illnesses, like a virus that results in deformed wings that prevent bees from flying.

If beekeepers don't intervene, the varroa mite can destroy a colony in less than two years. Meanwhile, the pest reproduces so rapidly, it builds resistance to chemical pesticides more quickly than solutions can be invented, Sheppard says.

That's why he decided to try an unconventional approach last year, after local mushroom expert Paul Stamets called him with an idea to help arm the honeybee in its fight against the mite.

"We've gone to the moon, we've gone to Mars, but we don't know the way of the bee?" says Stamets, who owns the medicinal mushroom company Fungi Perfecti near Olympia, Wash.

The self-taught mycologist says he noticed a relationship between honeybees and mushrooms when he observed bees sipping on sugar-rich fungal roots growing in his backyard.

"I looked down, and they were sucking on my mycelium," he says.

Now he thinks he knows why.

In recent years, his research has shown that rare fungi found in the old-growth forests of western Washington can help fight other viruses and diseases, including tuberculosis, smallpox and bird flu. He wondered if the honeybee would see similar health benefits from wood-rotting mushrooms.

"Bees have immune systems, just like we do," he says. "These mushrooms are like miniature pharmaceutical factories."

Stamets and Sheppard are feeding liquid extracts of those forest mushrooms to mite-infected honeybees. Initial findings suggest that five species of the wood-rotting fungi can reduce the honeybees' viruses and increase their lifespans.

In addition, the scientists are trying to fight honeybee viruses by taking aim at the varroa mite itself. Insect-killing fungi have been used as an alternative to synthetic chemical pesticides for years, and previous studies show that one type of entomopathogenic fungus can weaken varroa mites in beehives. 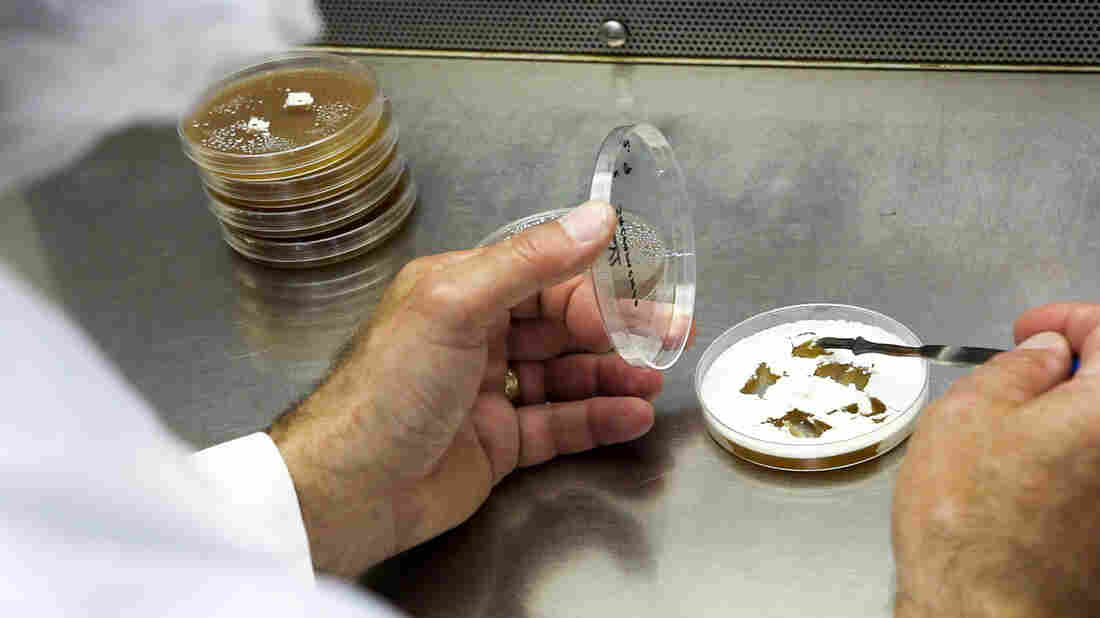 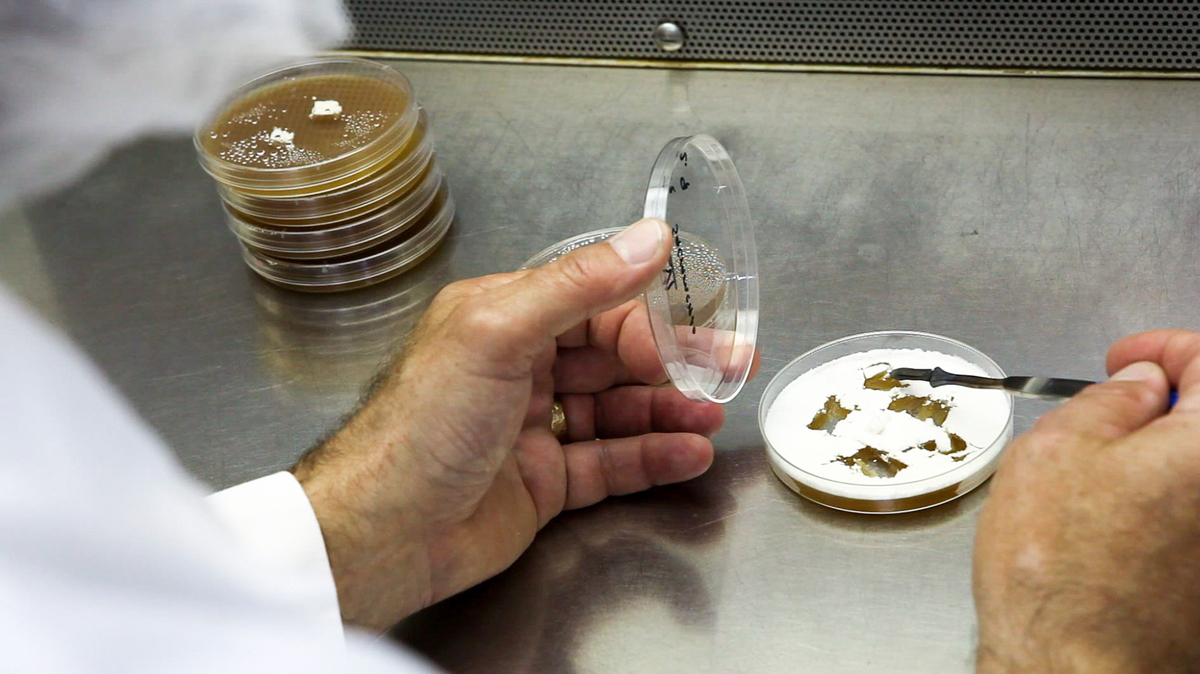 Paul Stamets cultures mycelium at his laboratory near Olympia, Wash.

Paul Stamets thinks his version of the fungus will be more effective. So far, the results of the experiments in Sheppard's lab look promising.

"The product seems to be killing mites without harming bees," Sheppard says.

Olson says two-thirds of his beehives died five years ago because of a varroa mite infestation. After several years successfully controlling the pest, he arrived this year in California for almond pollination season and nearly half of his bees had died during the winter.

"I was lucky that I had the cash and the connections to recover from that," he says.

Olson recently donated about $50,000 to Sheppard's department to help find a solution to the mite. Looking at the bees in one of his hives, he says, "I'm really concerned about whether these little girls will survive."

Ken Christensen is an associate video producer at KCTS9 in Seattle, Wash., as part of EarthFix, a public media collaboration reporting on the environment. This story first appeared on the EarthFix site.