Accessibility links
Sip On This: That $10,000 (Or $30) Bottle Of Wine Might Be Fake : The Salt Take a close look at the glass of wine you're drinking. There's a chance it could be plonk disguised by an upmarket label. Counterfeiting wine is big business among old and rare vintages. 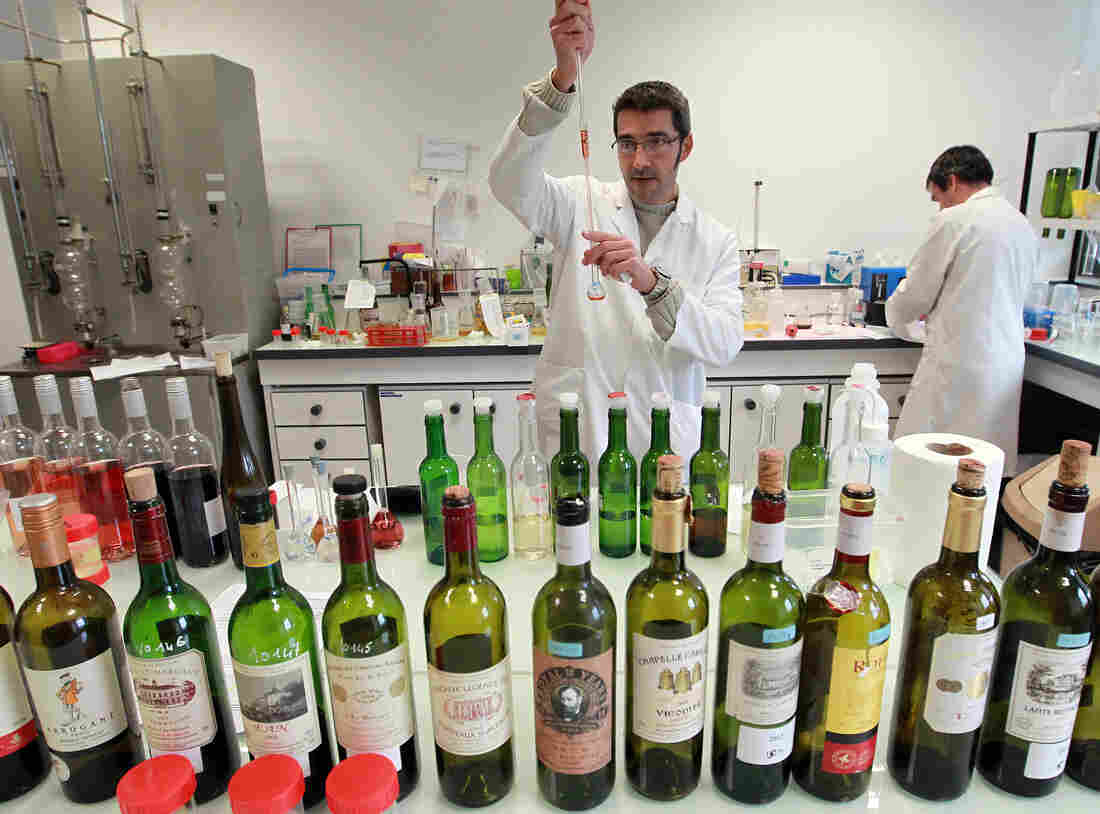 On an early spring day in 2012, a half-dozen FBI agents entered a house in the Los Angeles suburb of Arcadia. It belonged to an Indonesian named Rudy Kurniawan.

According to Maureen Downey, founder of winefraud.com, his home was kept to 55 degrees. "His elderly mother had to have a space heater in her bedroom because it was so damned cold," says Downey. "The entire house was cellar temperature."

Inside the FBI found everything to produce counterfeit wine: corks, dozens of empty bottles and 18,000 labels of the world's rarest wines.

"The whole thing was a wine counterfeiting factory," says Downey.

By the time of his arrest, the then 37-year-old Kurniawan had been living the high life. He had amassed a breathtaking cellar of Bordeauxs and Burgundys and regularly organized tastings of old and expensive bottles for other collectors. At the same time, the FBI says Kurniawan was concocting his own wines in his kitchen and selling them as precious vintages to unsuspecting collectors.

"Take for example one of the most highly counterfeited wines, which is 1945 Domaine de la Romanee Conti Romanee Conti," Downey says. "That wine, they made two barrels of it, which is exactly 600 bottles."

Downey says she's finding counterfeit bottles of it all over the world. A genuine bottle would be worth well over $100,000.

And yet, says Downey, Kurniawan was able to sell much of it: "He would make it to order."

And he fooled plenty of people, selling at least $50 million worth of counterfeit wine.

In 2012, he got caught and was sentenced to 10 years in prison. But counterfeiting still goes on because there are plenty of wine enthusiasts out there willing to part with their money.

"Particularly in the United States there are some fabulous collections which have been painstakingly built up over decades," says Michael Egan, who was the head of wines unit at Sotheby's auction house for more than two decades. He says there are many collectors willing to spend $10,000 to $20,000 a bottle.

That demand has driven up the price, and made conditions ripe for counterfeiters. "Some of the wineries like Screaming Eagle in Napa Valley, Calif., produce a very small amount of wine and there's a massive demand for that — there's a waiting list," says Egan. "Obviously that would be a temptation for counterfeiters to produce their own versions of it."

Egan spoke with NPR from his chateau in Bordeaux, France. He says since retiring from Sothebys in 2006, he's been busy authenticating private and corporate collections. So far, he's found about 2,300 bottles of high-priced, fake wine.

"Nobody in the world, nobody, is able to authenticate via taste," says Downey of winefraud.com. "That has been proven over and over again."

Downey says if people could authenticate by taste alone, wine counterfeiting wouldn't be possible. "The problem is, no one has the palate to know what all of these old wines taste like. ... Wine is a living thing and it changes with time."

What you can do, Downey says, is look at the bottle, the labels and the corks for inconsistencies. See if the wines were actually produced the year on the label. (It's harder to fake the newer, fine wines because many are outfitted with anti-counterfeit technology in the labels and bottles, she says.)

But counterfeiters are also getting more sophisticated. If you had been duped, you'd think you want to call the police, grab the counterfeiter and sue. But Frank Martell, director of fine and rare wine for Heritage Auctions, says most collectors want to keep it a secret.

"If somebody tells you $1 million of your collection is worth zero, your choices are take a hit or try and unload the stuff," Martell says. "And nobody wants to take a loss."

That's why counterfeit wines continue to circulate among auction houses and private collectors. But don't think it's just the high-rolling wine enthusiasts who are getting stung by counterfeiters. Martell says some of the $20 and $30 bottles out there are also fake.

"You can produce them in huge quantities and nobody is likely to catch you," says Martell.

Can you make money out of that, though? Martell says that if you figure $50 a case and you move 200 cases, then, yes.