Accessibility links
Monkeys Pick Coconuts In Thailand. Are They Abused Or Just Working Animals? : The Salt Animal advocates were outraged after discovering videos of leashed monkeys picking coconuts in Thailand. But monkey trainers and scientists say it's common practice and doesn't count as abuse.

What's Funny About The Business Of Monkeys Picking Coconuts?

What's Funny About The Business Of Monkeys Picking Coconuts? 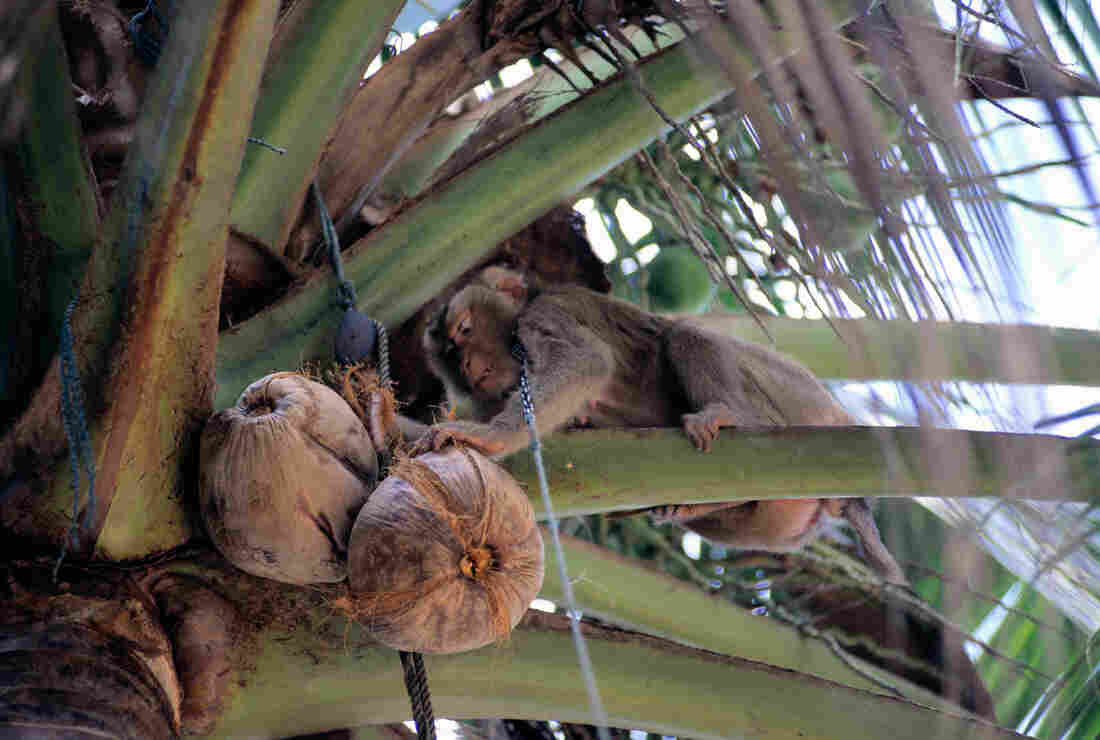 If you've consumed coconut oil or coconut meat lately, there's a reasonable chance it was imported from Thailand. And if it was, there's an even better chance the farmer who grew that coconut had a monkey fetch it from a tall tree.

Thailand has been raising and training pigtailed macaques to pick coconuts for around 400 years. Coconut farmers in Sri Lanka, Malaysia, India and other countries in the region sometimes rely on monkeys, too.

Why monkeys? Turns out a male monkey can collect an average of 1,600 coconuts per day and a female can get 600, while a human can only collect around 80 per day. It's also safer for a scampering, height-savvy monkey to pluck and drop the fruit from the trees — up to 80 feet tall — than a human, according to the National Primate Research Center at the University of Wisconsin, Madison.

We weren't aware that monkeys were key to the Asian coconut industry — until Animal Place, a farm sanctuary in Grass Valley, Calif., contacted us in early October claiming that monkeys are being "exploited" on coconut plantations there. "Animal-aware people are increasingly avoiding coconut products that come from monkey slavery," the group, which advocates a vegan diet, said.

While Animal Place says it has not actually visited any coconut plantations allegedly abusing monkeys, Marji Beach, the group's education director, tells The Salt that YouTube videos are evidence enough that the animals are cruelly shackled and forced to work.

"What I find most distressing is that they take them from wild, keep them tethered and keep them that way their whole life," says Beach. "Monkeys should stay in the wild."

After making the monkey-coconut discovery on YouTube, Beach asked several companies that sell coconut oil or other products containing coconut in the U.S. if their suppliers used monkeys. Beach says all of the companies she contacted replied that they do not.

Monkey trainers in Thailand tell The Salt they find that hard to believe.

"It would be difficult to find a coconut product made in Thailand that wasn't picked by a monkey," Arjen Schroevers tells The Salt by email. Monkeys pick 99 percent of the Thai coconuts sold for their oil and flesh, he says. 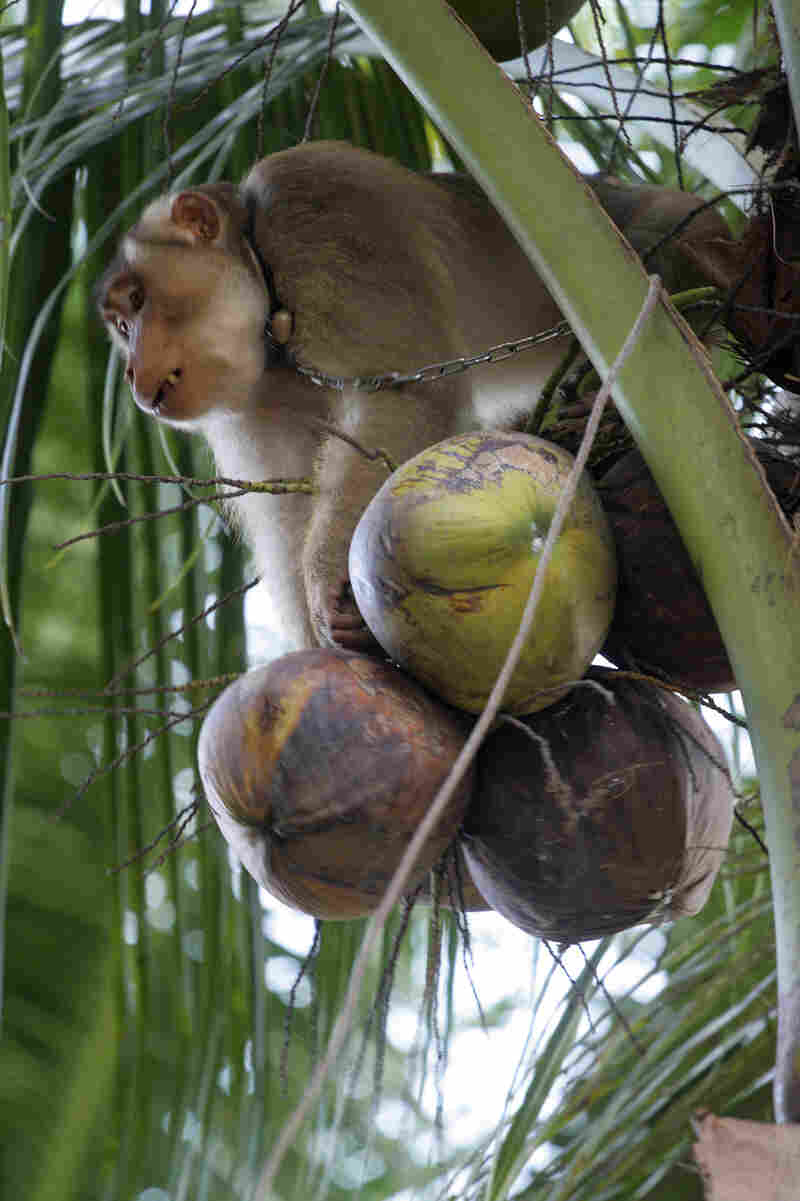 A male monkey can collect up to 1,600 coconuts per day and a female can get 600, while a human can collect only around 80 per day on average. iStockphoto hide caption

Schroevers runs the Monkey Training School in Surat Thani, Thailand, a Buddhist-inspired school founded 50 years ago to teach monkeys how to pick coconuts without the use of force or violence. He says Animal Place has it all wrong when it comes to how most monkeys that work on coconut farms are treated.

"It is always relaxed, no shouting, no punishing," he says. "Every few trees the monkey hugs his owner, who then checks the monkey for red ants (who live in the trees) and the monkey gets a massage. Outside working hours the monkeys are kept as a pet (only for the family owners, to strangers they are not friendly)."

And as for the tethering, Schroevers says it serves a variety of purposes including guiding the monkeys up the tree and preventing them from escaping.

What's more, says Schroevers, the alternative would be a human poking a long pole with a knife up into the tree to cut the coconuts. "Because the trees are so high, you must stand straight under the coconuts you want to collect," he says. "They drop 6-12 at a time. Very dangerous!" (He adds that coconuts kill around 600 people per year worldwide.)

It's Bananas: India Hires 'Monkey Mimics' To Scare Away Real Ones

Others familiar with the coconut-picking monkeys of Thailand are also skeptical of the allegations of abuse. Leslie Sponsel is a professor emeritus of anthropology at the University of Hawaii who, with his wife, Dr. Poranee Natadecha-Sponsel, studied monkey-human relationships in Thailand and published papers on the topic.

"During our time in southern Thailand, we never observed or heard of cruelty or abuse of the monkeys," Sponsel says. "Indeed, the monkeys are very similar to family pets, and for some households, even like family members to some degree. Young ones are trained, and they are kept on a chain tethered to the handler or to a shelter when not working. They are fed, watered, bathed, groomed and otherwise cared for. They often ride to the coconut palm plantation on the back of a motor bike or in a cart driven by the handler.

"That is not to say that there is never any cruelty or mistreatment," Sponsel adds. But overall, he says he respects "the poor farmers and others who are just trying to survive and prosper in support of their families."

What do you think? Let us know in the comments.