Accessibility links
Survey: Half Of Food Workers Go To Work Sick Because They Have To : The Salt Sick food workers who go to work say they can't afford to stay home or don't want to let their co-workers down, a survey finds. That puts consumers at risk of getting sick from contaminated food. 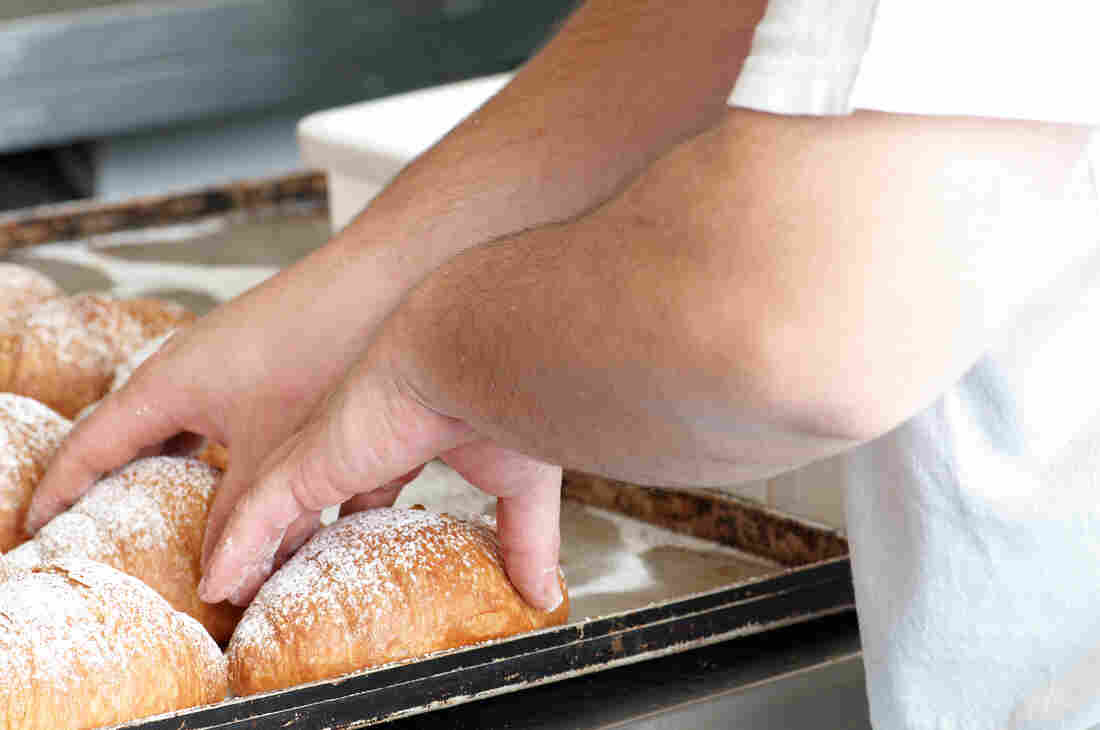 The vast majority of reported cases of norovirus — the leading cause of foodborne disease outbreaks and illnesses across the country — have been linked to infected food industry workers. iStockphoto hide caption 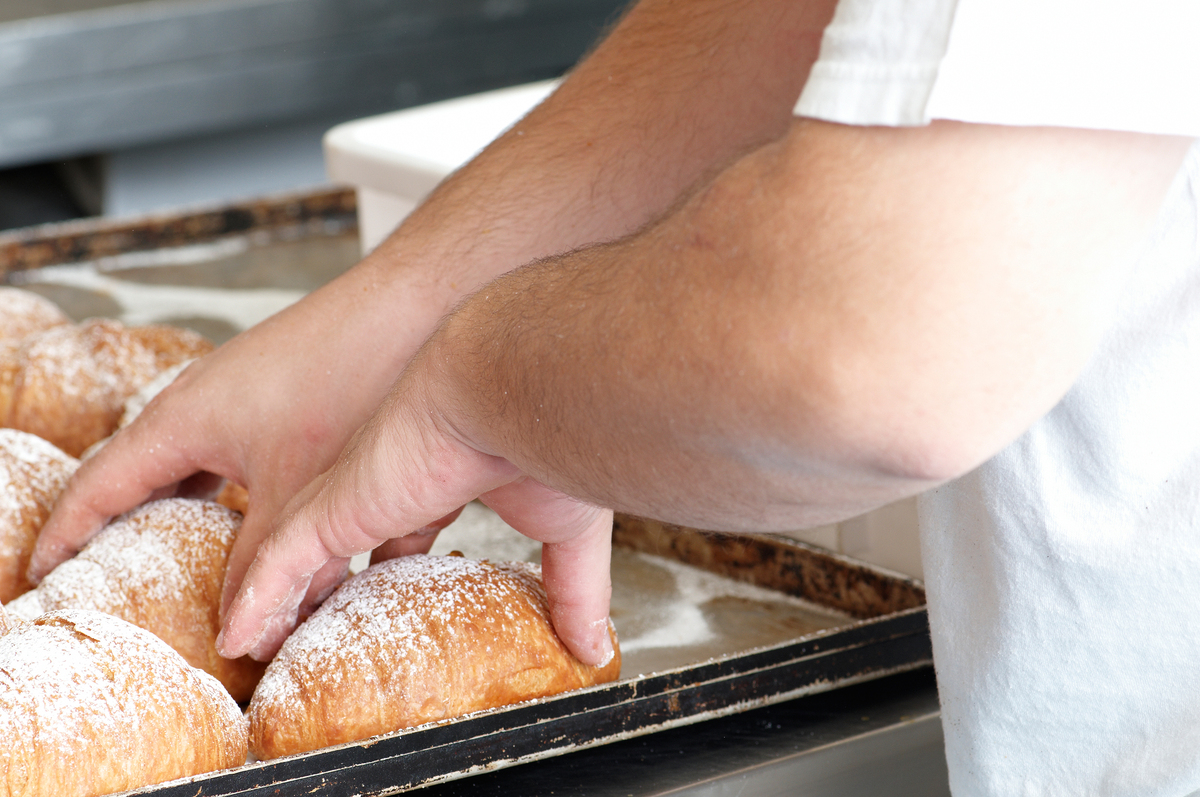 The vast majority of reported cases of norovirus — the leading cause of foodborne disease outbreaks and illnesses across the country — have been linked to infected food industry workers.

Flu season is here. And when the flu strikes, the luckier victims may call in sick without getting punished or losing pay.

But many American workers, including those who handle our food, aren't so fortunate.

Fifty-one percent of food workers — who do everything from grow and process food to cook and serve it — said they "always" or "frequently" go to work when they're sick, according to the results of a survey released Monday. An additional 38 percent said they go to work sick "sometimes."

That's a practice that can have serious public health consequences. For instance, as The Salt reported last year, the vast majority of reported cases of norovirus — the leading cause of foodborne disease outbreaks and illnesses across the country — have been linked to infected food industry workers.

But it's not as if these sick food workers are careless. Nine out of 10 workers polled in the new survey said they feel responsible for the safety and well-being of their customers. Yet about 45 percent said they go to work sick because they "can't afford to lose pay." And about 46 percent said they do it because they "don't want to let co-workers down."

The study was commissioned by Alchemy, a firm that works with companies across the food chain to improve safety and productivity. Alchemy CEO Jeff Eastman tells The Salt that the survey was designed to help his firm learn more about the experience of food workers. Alchemy asked the Center for Research and Public Policy, a consulting firm, to conduct the research with more than 1,200 food workers in the U.S. and Canada in July.

Though some people might be tempted to point a finger at the workers for going to work sick, the reality of their situation helps explain why they do it, says Jose Oliva, co-director of the Food Chain Workers Alliance. "A lot of these workers actually depend on every single one of the days that they work for money," Oliva says. "So if you don't go to work, you don't get paid."

Indeed, a 2012 study from Oliva's Food Chain Workers Alliance and the Restaurant Opportunities Centers United found that 79 percent of food system workers did not have paid sick days or did not know whether they did. Similar to the current study, the 2012 report also found that 53 percent of workers had worked when they were sick.

And Oliva points to another factor in the equation: low wages. Many of the lowest-paying jobs in America are in the food industry, according to data from the Bureau of Labor Statistics. If workers were making a living wage, Oliva says, they might have more flexibility to take an unpaid day when needed. But for workers making minimum wage, or even the federal subminimum "tipped" wage of $2.13 per hour, "You just can't" take an unpaid day, Oliva says.

According to Saru Jayaraman, co-director of the Restaurant Opportunities Centers United and director of the Food Labor Research Center at the University of California, Berkeley, workers have other incentives to come to work sick. "It's also that they'd actually be penalized, fired or retaliated against for taking a day off when sick," she says.

Research that the ROCU conducted in Philadelphia, for example, showed that a third of restaurant workers in that city have worked sick because they feared retaliation if they took a day off. Jayaraman, author of the 2014 book Behind the Kitchen Door, says workers have told her that they've reported to duty with everything from H1N1 to pinkeye and typhoid fever.

"One of the most egregious examples that I describe in the book is a worker at a Fayetteville, N.C., Olive Garden [who] was forced to work with hepatitis A because [Olive Garden] doesn't have an earned sick leave policy," Jayaraman says. As a result, Jayaraman says, 3,000 people had to be tested for hepatitis A at the Cumberland County, N.C., health department.

Four states — California, Connecticut, Massachusetts and Oregon — have passed legislation to provide paid sick leave, in addition to a number of cities across the country. Last month, President Obama signed an executive order allowing employees of federal contractors to earn up to seven paid sick days a year.

Some food businesses are improving their policies, too. In July, Chipotle expanded paid sick leave to all its employees.

But Jayaraman says there's still "tremendous opposition" to paid sick leave, from the National Restaurant Association and other industry groups. (The association did not respond to multiple requests for comment from NPR.)

The National Restaurant Association's Christin Fernandez tells The Salt that her organization "does not want workers going into work sick. Flexible scheduling is a hallmark of the restaurant industry. If a restaurant employee is not feeling well, one of good things about the industry is that they can talk to their employer ... and work out a schedule that best fits their health needs."