Accessibility links
As Schools Buy More Local Food, Kids Throw Less Food In The Trash : The Salt Kids in America's schools are eating more local food, although it makes up only a small part of the average meal. Advocates say local food doesn't have to cost more, but buying it does take more time. 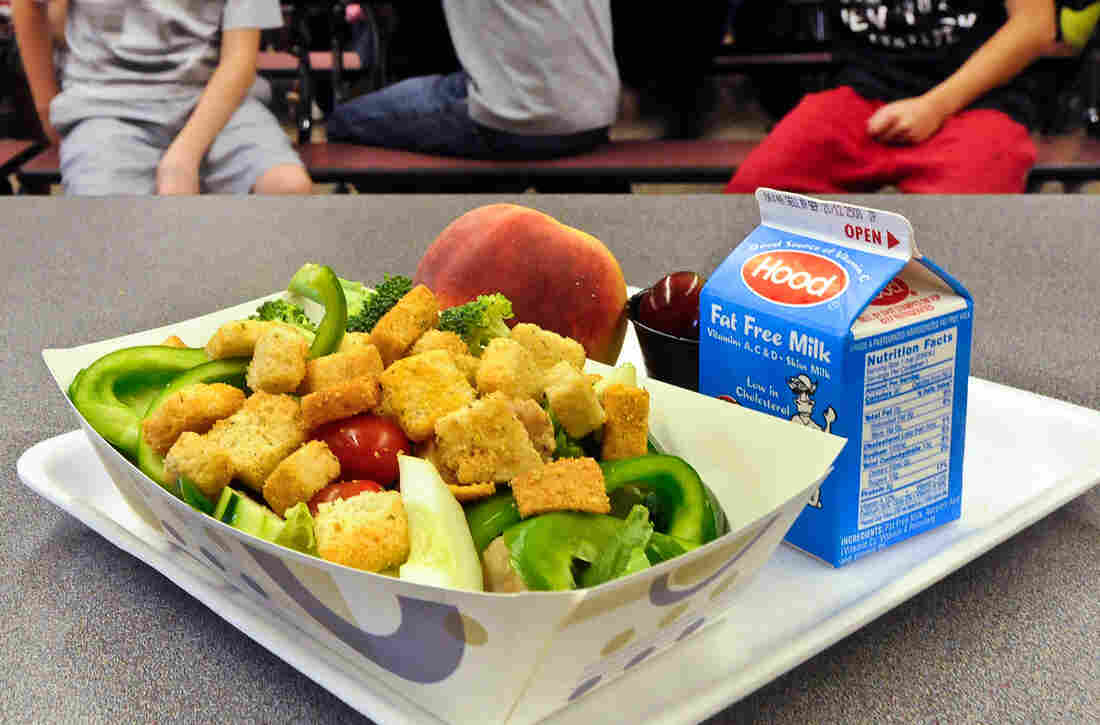 While schools are spending more on local food, it still makes up only a small portion of the average school meal. Here, a chicken salad at the cafeteria at Draper Middle School in Rotterdam, N.Y., in 2012. Hans Pennink/AP hide caption 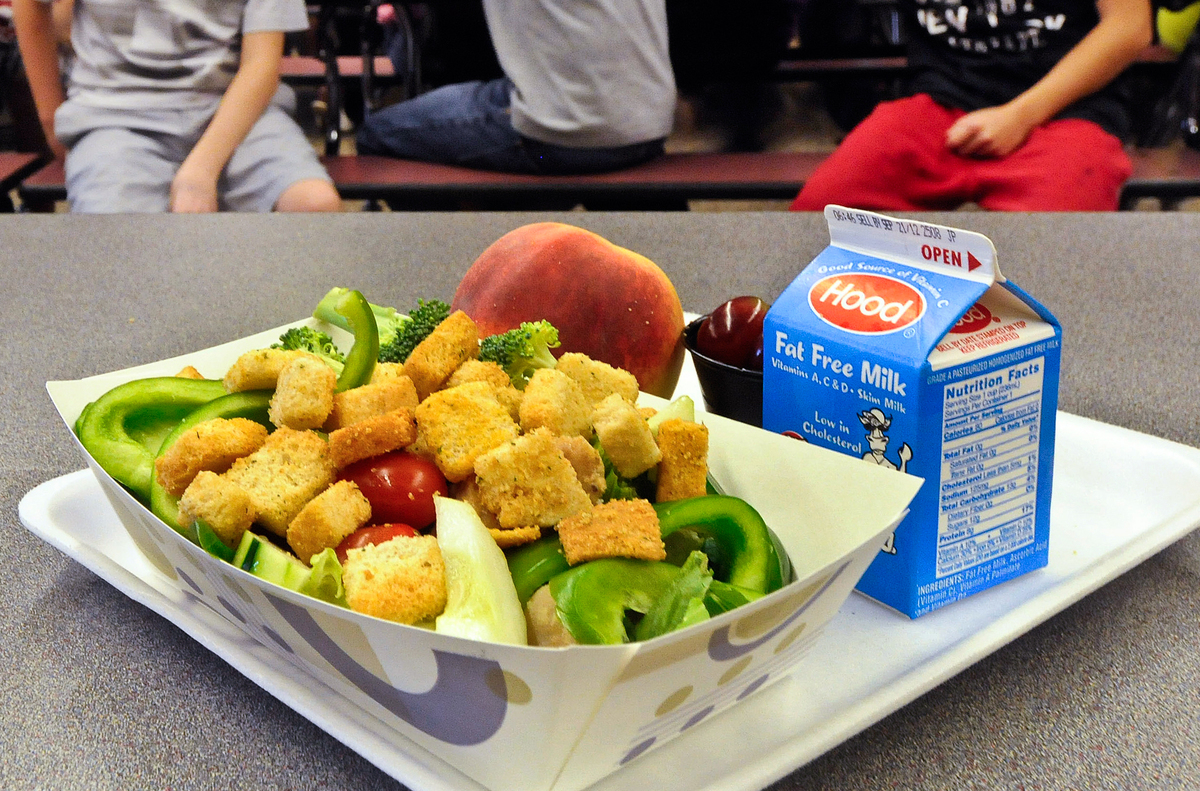 While schools are spending more on local food, it still makes up only a small portion of the average school meal. Here, a chicken salad at the cafeteria at Draper Middle School in Rotterdam, N.Y., in 2012.

More and more schools are trying to serve meals with food that was grown nearby. The U.S. Department of Agriculture just released some statistics documenting the trend.

According to this "census" of farm-to-school programs, at least 42,000 schools spent almost $600 million on local food during the 2013-2014 school year. That's up almost 50 percent from the previous census, conducted two years earlier. (Both "censuses" were actually a questionnaire that the USDA sent to schools.)

Why Some Schools Serve Local Food And Others Can't (Or Won't)

The schools reported that when they served local food, their kids ate more healthful meals and threw less food in the trash.

Washington, D.C., is one of the school districts that has been promoting local food. That's one reason why, at 9 a.m. Tuesday, a truck arrived at DC Central Kitchen, a nonprofit organization that supplies meals to 10 schools in the city.

Amy Bachman, the organization's manager of procurement and sustainability, points to cases of broccoli, kale and sweet potatoes stacked in DCCK's cold room. The name "Kirby Farms" is stamped on each cardboard case. Kirby Farms is located in Mechanicsville, Va. It's two hours away, but that's close enough to be called "local."

Bachman has organized this shipment partly because there's a D.C. law that requires them to serve some local food, to support local businesses. But her organization also wants to do it.

"For us, it's also about getting kids to eat more, to get them to try food and get them interested in food," she says. And it helps to create a connection to food, she says, when they can tell a story about that meal: "Those sweet potatoes came from Kirby Farms! This was just down the road in Virginia!" 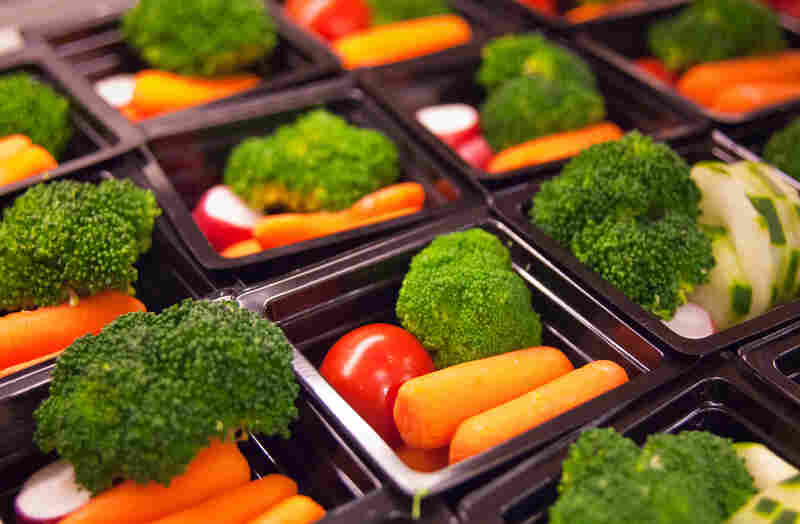 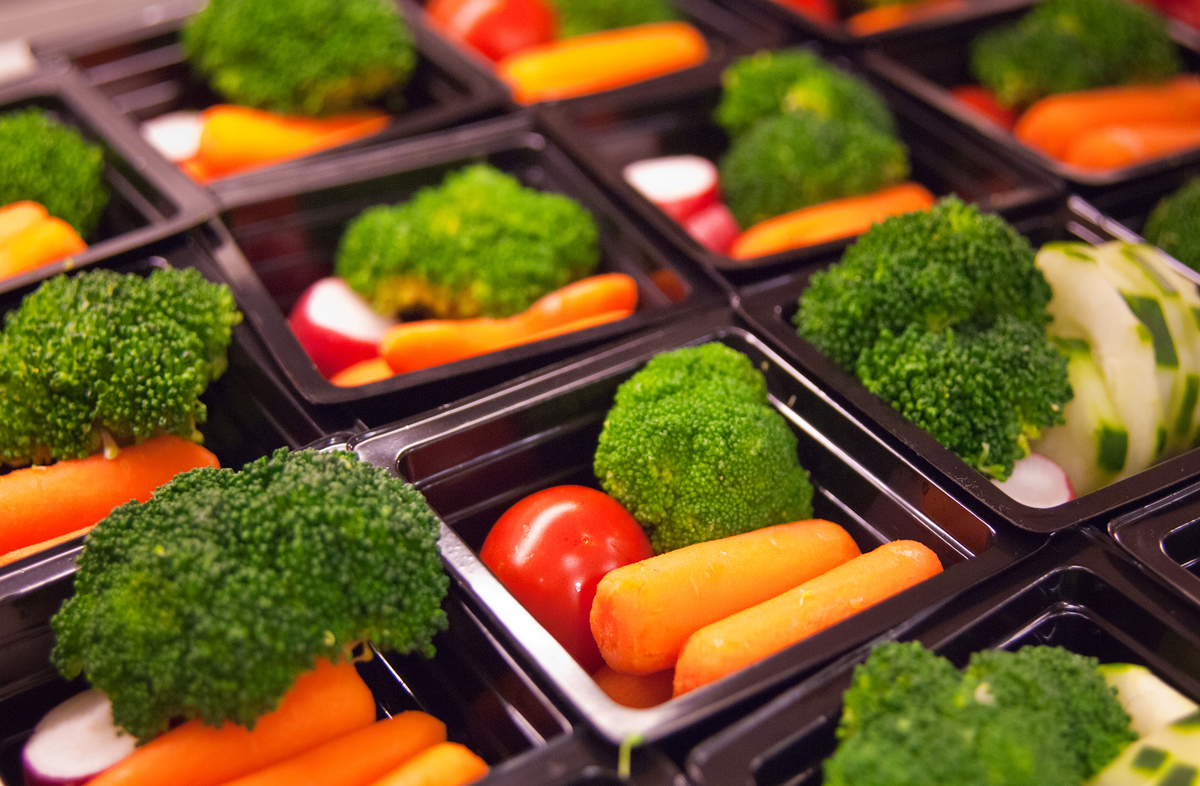 All across the country, you can find school districts doing similar things, for similar reasons.

"There's universal interest in this, and that's why we've seen dramatic increases in sales, and why we think there's still a lot of upside potential to this," Secretary of Agriculture Tom Vilsack said in an interview.

Bachman, at DCCK, says that in her experience, buying local food doesn't take more money, but it does take more time. "We're not buying just from one vendor," she says. "We work with 20 or 25 different farms."

Managing delivery schedules and matching growing seasons with menus takes a lot of planning and coordination.

This may be why local food still makes up only a small part (less than 20 percent) of the average school meal. Fewer than half of the school districts that responded to the USDA survey had any kind of local food program. (For more on why many schools struggle to source food locally, read Tracie McMillan's post from March.)

Even those in the new census that did promote local food spent, on average, only 20 percent of their dollars on produce that grew close by.