Accessibility links
Cooking With Disabilities: An Exercise In Creative Problem Solving : The Salt In a perfect world, everyone with a physical disability would have a kitchen fully adapted to their needs. But such remodels can be pricey. In many cases, small DIY-solutions help keep people cooking. 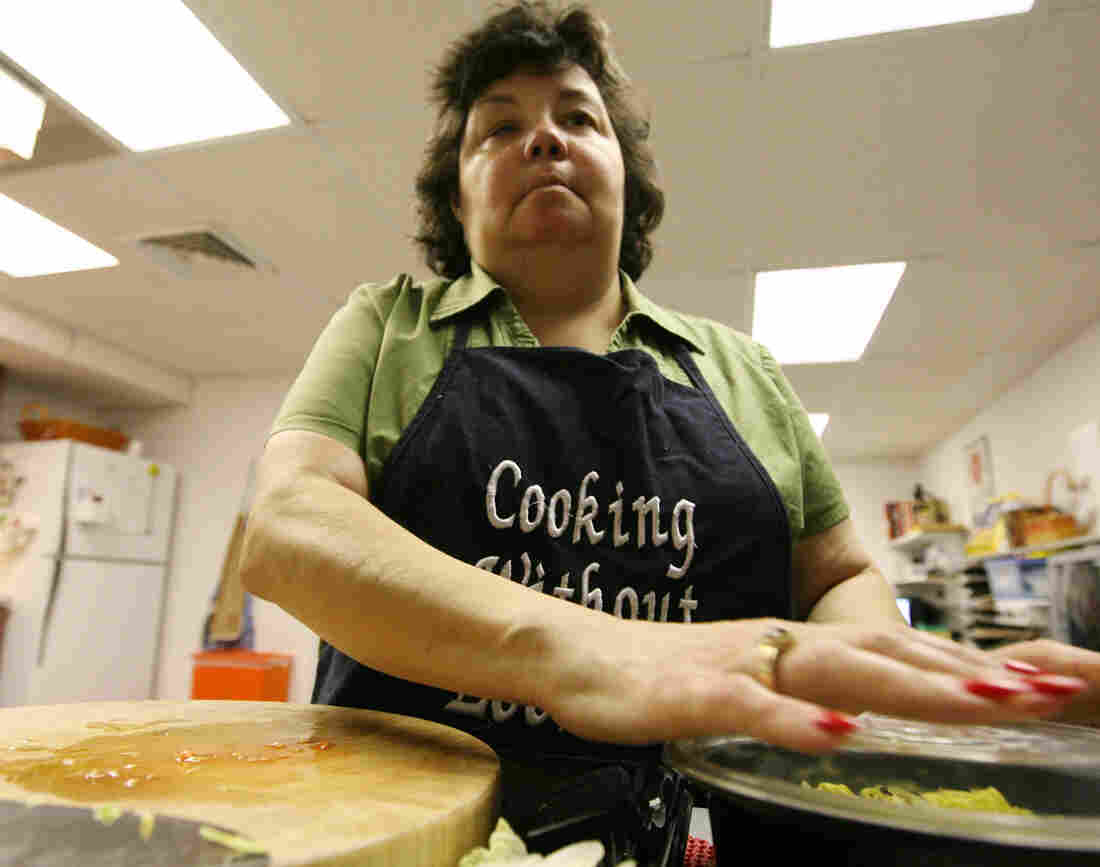 Celia Chacon, a former host of Cooking Without Looking, in the kitchen at Lighthouse of Broward, Fort Lauderdale, Fla., in 2008. The television cooking show features chefs and guests who are blind or visually impaired. Luis M. Alvarez/AP hide caption 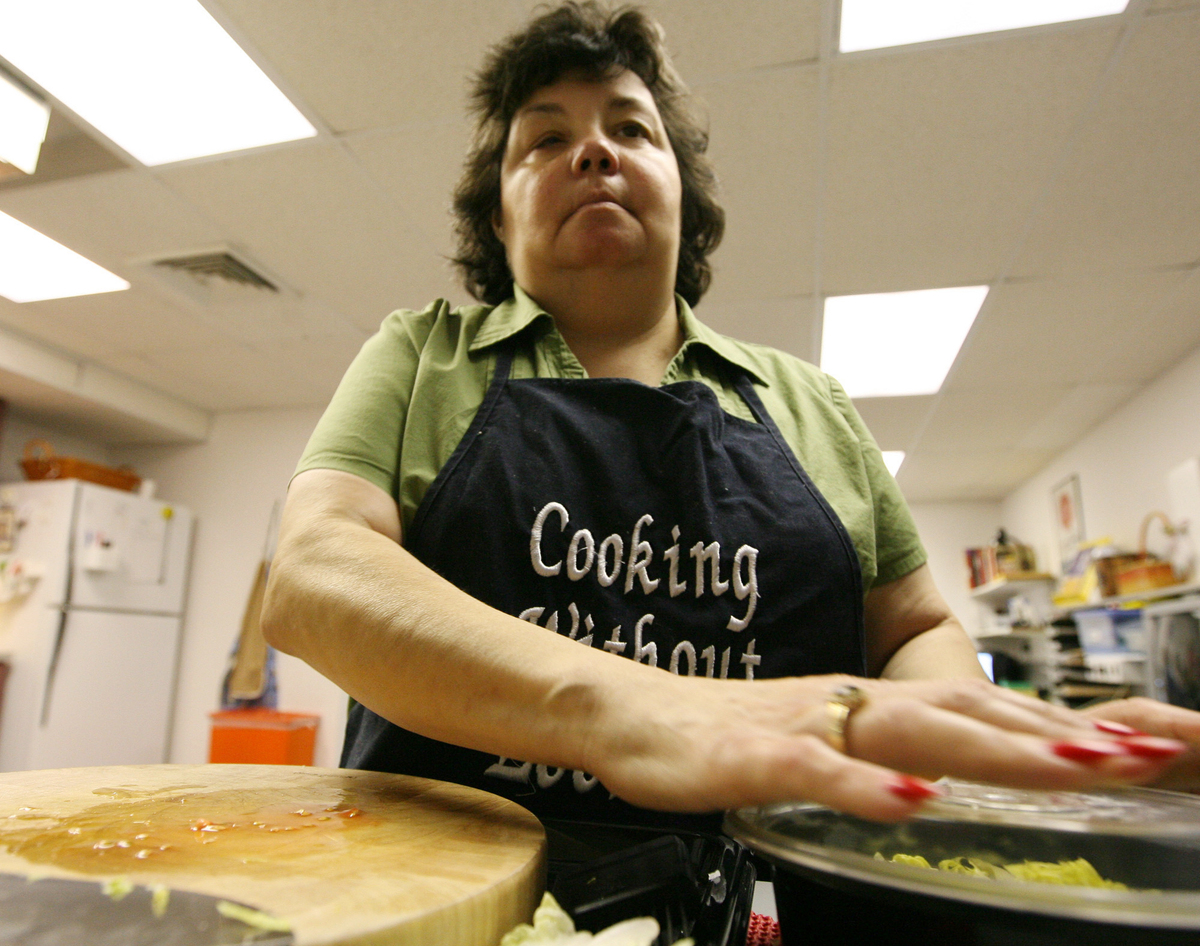 Celia Chacon, a former host of Cooking Without Looking, in the kitchen at Lighthouse of Broward, Fort Lauderdale, Fla., in 2008. The television cooking show features chefs and guests who are blind or visually impaired.

Christine Ha made quite an entrance on season three of the Fox television show Master Chef.

Though the final plating of her dishes would not have been out of place in a restaurant, the steps to prepare them were noticeably different. For starters, Ha — who also goes by the moniker The Blind Cook — used a guide and a walking stick to get around on stage. And when it came to judging the quality of her ingredients, she had to rely on her other senses more than most chefs do. Still, her technique — and her dish of Vietnamese catfish — wowed the judges, and she ended up winning the entire season of the show.

But there are over 38 million Americans with severe physical disabilities, and not everyone is a Master Chef. So how does the rest of this population find ways to navigate the kitchen?

Nicolas Steenhout, now a speaker and consultant on disability issues, is a culinary school graduate who worked as a chef for several years. Two decades ago, after a rock climbing accident left him paralyzed, Steenhout had to learn how to do everyday tasks from a wheelchair. Life had changed, but his interest in cooking continued. "I realized a lot of people with disabilities don't really know what to cook or what was available to them," he says. So he started using the Internet to share his tips.

In a perfect world, Steenhout says, everyone would have a fully adapted kitchen. This means different things depending on someone's disabilities, but it could involve, for instance, lowered countertop heights or new appliances. But given that many people have trouble funding a remodel for a basic necessity like making their front stairs wheelchair accessible, such kitchen overhauls are usually financially out of reach.

Instead, Steenhout focuses on little alterations that can make a big difference. For instance, "If you're a wheelchair user and you can't see into your pots, you can mount a little bathroom mirror on a pole," he says. The mirror can be used to easily see whether water is boiling or the scrambled eggs are done.

"There are so many tricks that you can do so you don't hurt yourself. Honestly, those of us who are sighted need to learn them — people who are blind or visually impaired are trained not to hurt themselves."

Many companies now sell kitchen equipment designed to address various disabilities, from lowered grip strength to vision impairments. But in many cases, there's a cheap hack for anyone who's DIY-inclined. One example: Rather than buy large-handled utensils made for people with grip issues, people can tape rubber foam around the handles. If someone has trouble using a traditional two-handed rolling pin, a paint roller handle with a wooden dowel attached is an easy homemade variation. "It's not a one-size-fits-all solution," Steenhout says. "It's a question of using imagination to figure out how to do this."

For those with visual impairments, measuring cups that talk or are written in braille can help. There are also talking barcode scanners that can help people with their grocery shopping.

"There are so many tricks that you can do so you don't hurt yourself. Honestly, those of us who are sighted need to learn them — people who are blind or visually impaired are trained not to hurt themselves," says Renee Rentmeester, creator and executive producer of the television program Cooking Without Looking. The cooking show, which features chefs and guests who are blind or visually impaired, is currently transitioning to its new host Foody TV, an online lifestyle network found on services like Roku or Google TV.

Here are a few rules for the blind: Use a sharp knife to lower the risk of the blade slipping. It might sound counter-intuitive, but a dull knife makes it more likely that anyone — regardless of your eyesight or physical abilities — might cut themselves. Wear shoes to protect feet from falling sharp objects. Don't wear sleeves that could accidentally catch on fire. Never preheat the oven — otherwise, Rentmeester says, "you'll burn your arms when you go to open it." Instead, put food into a cold oven and assume you'll need some extra cooking time.

For patients with a new disability, occupational therapy programs may go out of their way to add culinary life skills into the training. After 19-year-old Jared Grier was paralyzed from the chest down earlier this year, he went to a program that walked patients through the steps of making pizza, from grocery shopping to pulling the pie out of the oven.

But each person has different challenges, and for some, even a simple pasta night can be a trial. Grier explains that he can't move his fingers except for what's called a "passive grip," a tightening and loosening of the tendons in his wrists. "It makes doing a lot of things more difficult, and some things, almost impossible," he says.

At home, Grier now has an oven "that opens more like a microwave," which makes it easier to access and put pans inside. He can still chop and cut, thanks to a pivot knife: It's a knife that's permanently attached to the cutting board by the tip; this keeps it in the proper position, while small spikes on the cutting board skewer food into place without needing an extra hand. The handle has been modified so Grier can strap in his hand to move the knife up and down.

"I personally didn't think about or consider what people in the position I'm now in have to go through," Grier says of life after dropping out of a tree to the ground 12 feet below. But he describes learning adaptive techniques as a relief. "I wasn't the first person—there's been years and years of people figuring out what works."

Other than the occasional meal and a cooking class in high school, Grier didn't spend too much time in the kitchen prior to his accident. But cooking is "an important life skill," Grier says, and he doesn't want to rely on microwave meals.

"Everybody, even if you're disabled, should know how to cook for yourself," he says.

Tove Danovich is a food journalist based in New York City.