Accessibility links
Hummus Diplomacy: Israeli Cafe Discounts Meals Shared By Jews And Arabs : The Salt During a month of renewed Israeli-Palestinian violence, one hummus restaurant is paying Jews and Arabs to sit down together for a meal. We drop in on the cafe to witness culinary diplomacy in action. 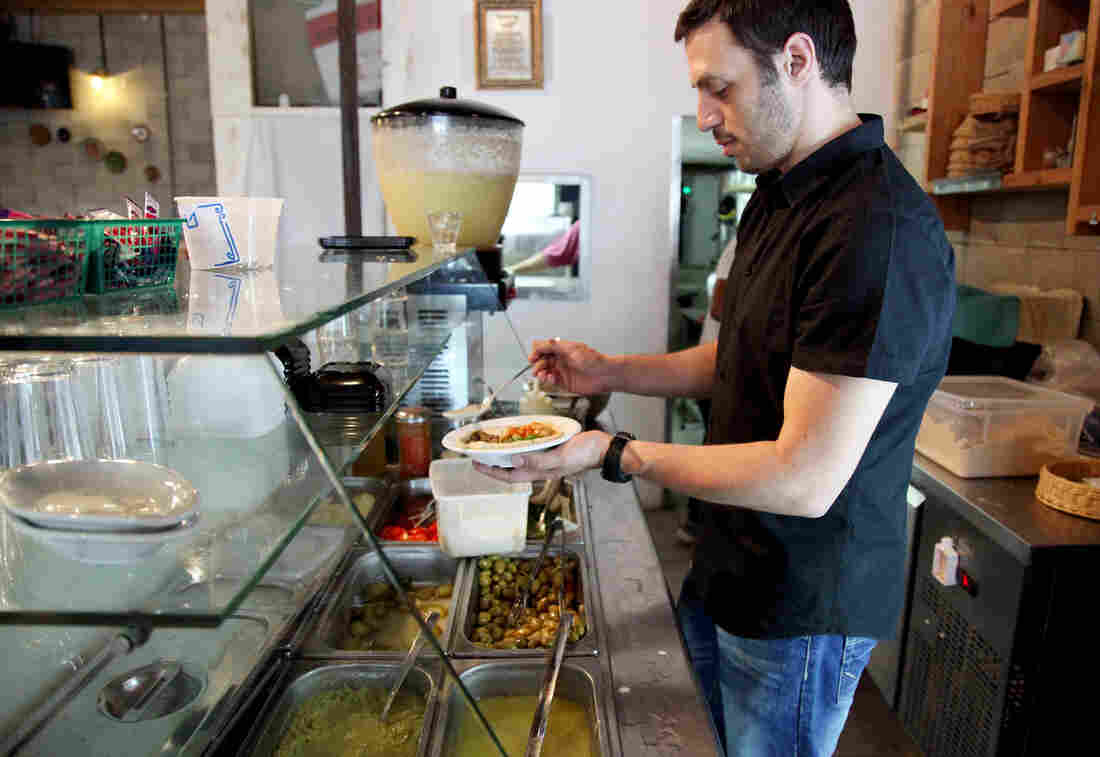 Kobi Tzafrir serves hummus at the Humus Bar, his restaurant north of Tel Aviv, Israel. "If you eat a good hummus, you will feel love from the person who made it," he tells The Salt. "You don't want to stab him." Daniella Cheslow for NPR hide caption 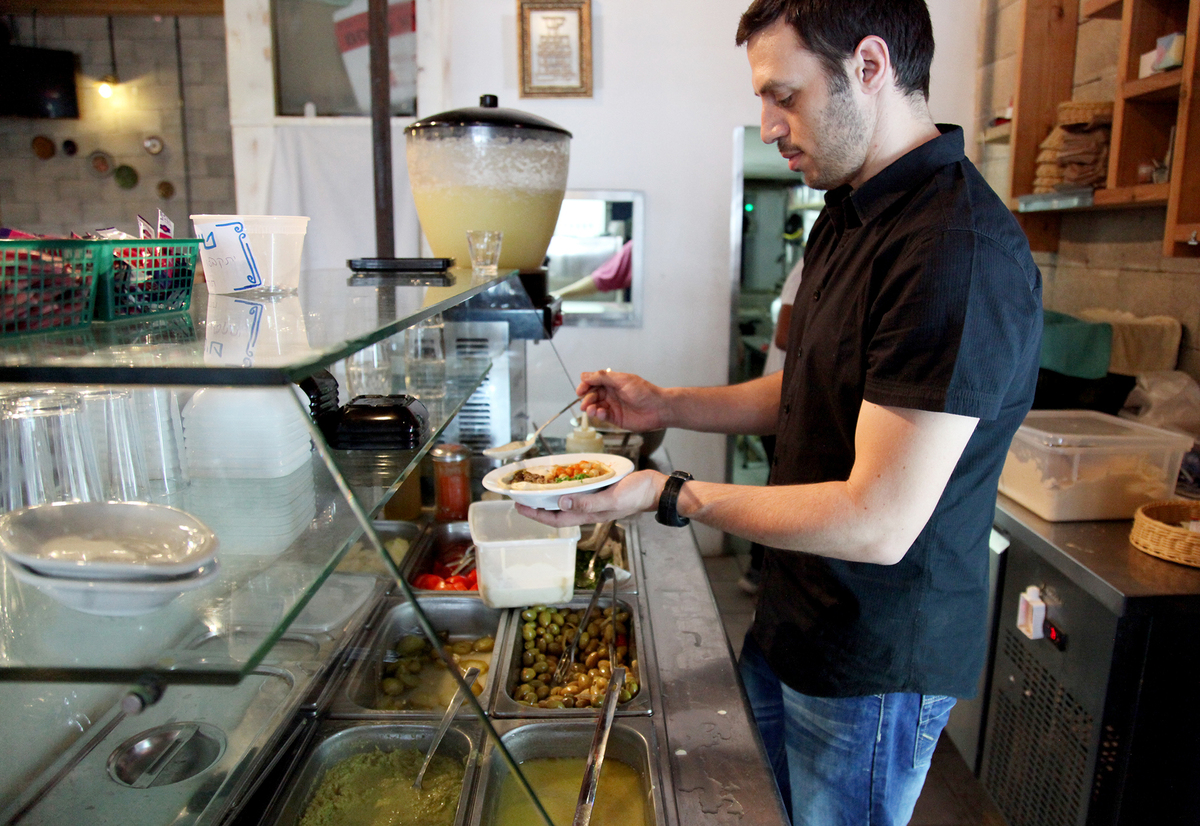 Kobi Tzafrir serves hummus at the Humus Bar, his restaurant north of Tel Aviv, Israel. "If you eat a good hummus, you will feel love from the person who made it," he tells The Salt. "You don't want to stab him."

During a month of renewed Israeli-Palestinian violence, one hummus restaurant is paying Jews and Arabs to sit down together for a meal.

On Oct. 13, Kobi Tzafrir, owner of the Humus Bar in a shopping mall in Kfar Vitkin, north of Tel Aviv, advertised a 50 percent discount to Jews and Arabs who eat together on his restaurant's Facebook page. It read:

His post was shared more than 1,900 times, and news of the deal has made headlines around the world.

Tzafrir says he cooked up the promotion as a way to wipe away some of the gloom of the current Israeli-Palestinian animosity. "We hear a lot of extremists on the news, on Facebook, on TV, and it seems like everything here is very bad," Tzafrir tells NPR's The Salt. "But I wanted to show that everything here is not so bad. Things get out of proportion."

Tzafrir, an Israeli Jew, is a latecomer to hummus — and a true believer in its powers. Growing up in the suburbs of Tel Aviv, he ate mostly packaged hummus from the supermarket. When he was about 20, he tried his first bowl of freshly ground chickpea paste, served hot, at an Arab restaurant — and he became an evangelist.

"If you eat a good hummus, you will feel love from the person who made it," he says. "You don't want to stab him."

Hummus is ubiquitous across the Middle East. A 2012 film, Make Hummus Not War, documented the competing Palestinian, Lebanese and Israeli claims to the chickpea paste.

In recent years, at least one new hummusiya, or hummus restaurant, has opened every week in Tel Aviv, according to Shooky Galili, an amateur hummus historian in Tel Aviv and author of the comprehensive review site humus101.com.

Tzafrir opened Humus Bar four months ago. Since announcing his hummus peace deal earlier this month, Tzafrir says only about 10 tables of Arabs and Jews have received the discount. But, he says, business is up by at least 20 percent — even if a substantial part of the boost is from local and foreign journalists.

Galili says hummus has a long history of bringing Arabs and Israelis together.

Before the founding of modern Israel in 1948, Jews in the area would eat hummus in Palestinian restaurants as a way of showing fearless bravado, he says. And even today, he says, a well-known hummus restaurant will draw Israeli Jews into Arab neighborhoods and towns they would otherwise have no reason to enter. About a fifth of Israel's population is Arab. Many Arab Israelis have close family ties to Palestinians in the West Bank and Gaza Strip. 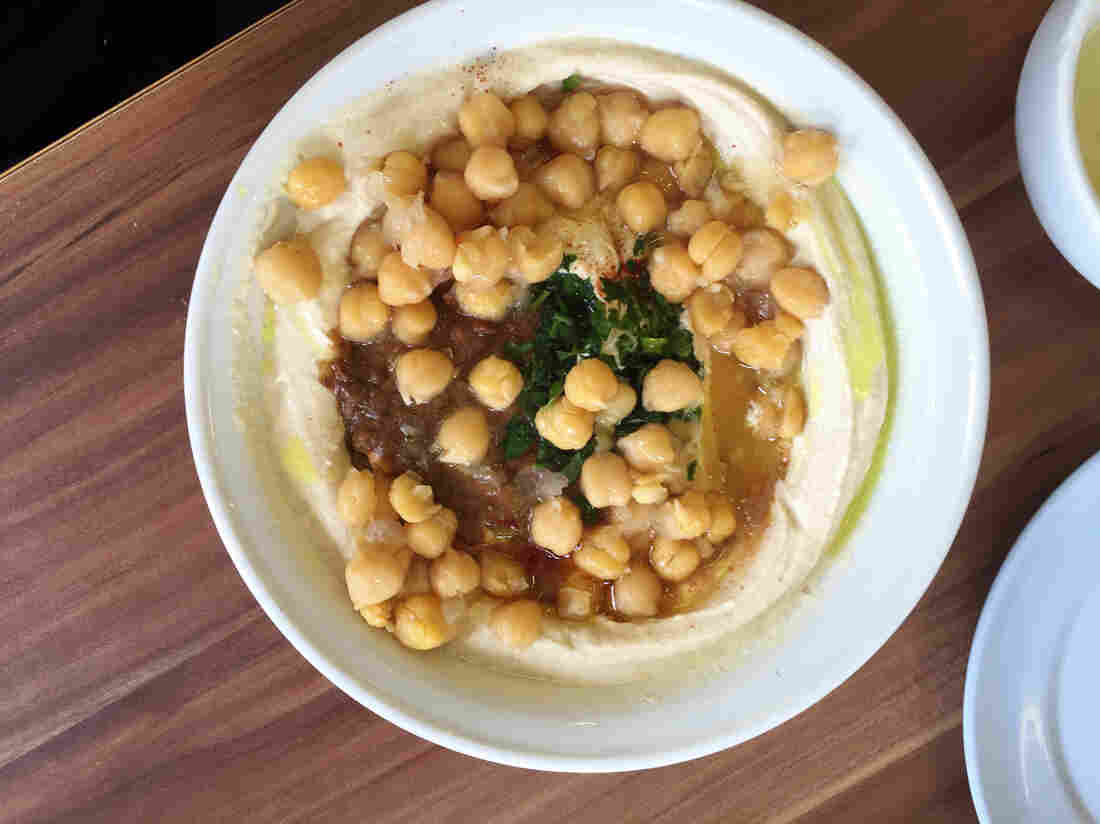 A bowl of Kobi Tzafrir's hummus. Both Israelis and Palestinians love the hummus chickpea paste. Tzafrir is trying to use this shared love to bring people together. Daniella Cheslow for NPR hide caption 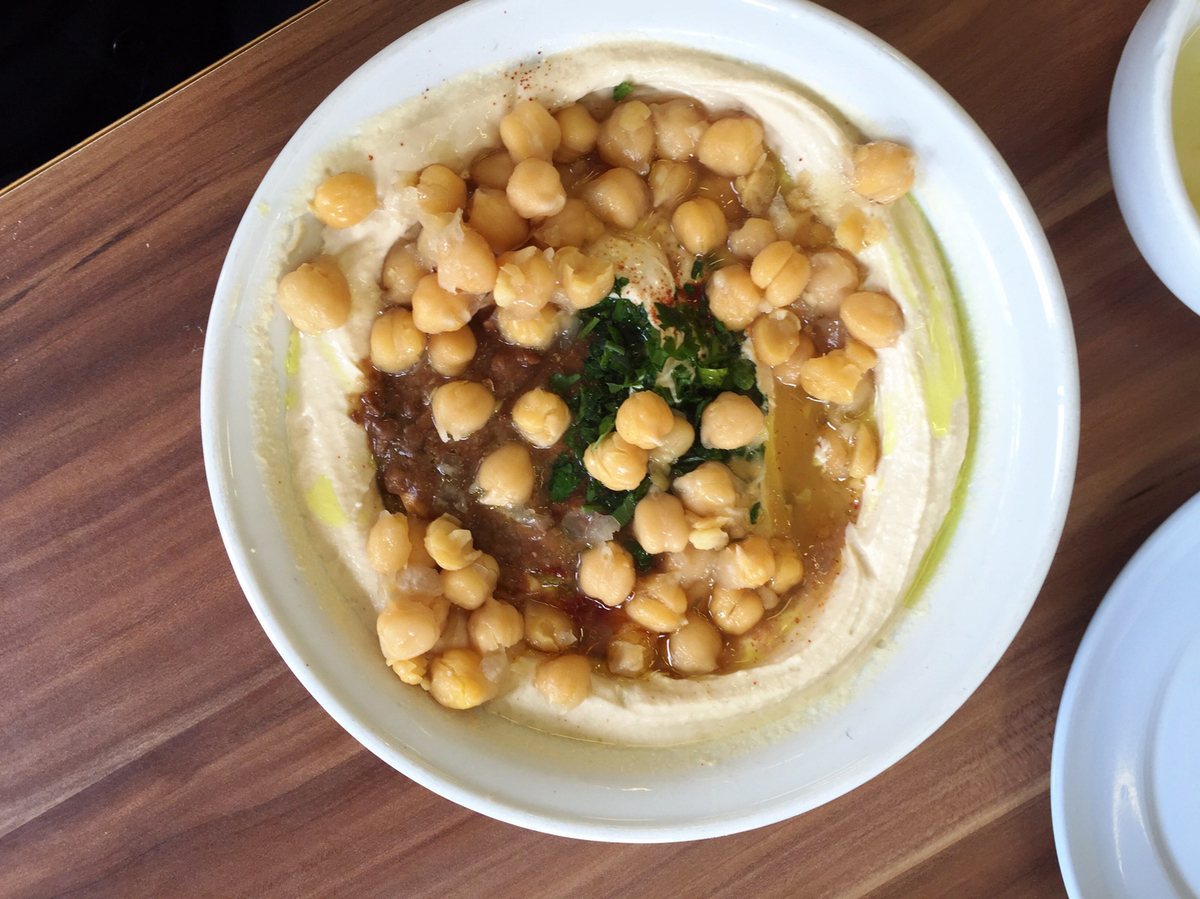 A bowl of Kobi Tzafrir's hummus. Both Israelis and Palestinians love the hummus chickpea paste. Tzafrir is trying to use this shared love to bring people together.

But in the current atmosphere in Israel, hummus restaurants have become a litmus test of race relations.

Since October, Palestinians have killed 10 Israelis in a series of stabbings and shootings. Israeli security forces have killed at least 48 Palestinians, including Arab Israeli assailants, in the same period. In this environment, Israelis who normally visit Arab restaurants have been shying away from them.

Abu Hassan, a boisterous hummus restaurant in Jaffa, the Arab quarter of Tel Aviv, has seen business plummet in recent weeks. Its Facebook page is filled with posts from customers expressing their shock at the lack of the usual snaking lunch line.

In early October, Tel Aviv Mayor Ron Huldai posted a photo from a hummus meal at a different Jaffa Arab restaurant. "The hummus is fantastic as ever, just come," he wrote.

Israelis were quick to respond. "They wait tables by day, throw stones and fly Hamas flags by night," one commenter said. "Bon appetite, we're eating at Jewish places," another added.

On Thursday at Humus Bar, lunch business was brisk. Several Jewish Israeli customers dropped in from work for a bowl of hummus, topped with warm cooked chickpeas, hot fava beans, or stir-fried mushrooms and onions. Tzafrir took care to make every plate of hummus himself, dusting each with paprika, cumin, olive oil and chopped parsley. He says he has not yet trained his staff in how to put together the perfect serving.

Tel Aviv resident Nira Shiran, who stopped in for takeout, told us the discount is "wonderful. Anything that can bring the peoples together gets my blessing."

Shiran, who is Jewish, says she grew up in northern Israel, in Jewish towns surrounded by Arab villages, where she had good relations with her neighbors. But now, she says, it's dangerous to venture into Arab towns. "I will not go to Jaffa until the situation calms down," she says.

Amin Tabri, a Palestinian from east Jerusalem, was one of the few Arab customers. He was visiting Humus Bar with colleagues — including Jewish ones. Tabri says he's keeping his three children home these days because he fears for their safety.

Tabri says he didn't think hummus could bring about peace, "but maybe the idea will reach politicians that we're fed up."

Itai Stern, an Israeli Jew from Tel Aviv, told me this was his first visit to the Humus Bar. He'd come with a Jewish colleague and didn't know about the deal.

"This whole story is pretty funny," he says. "I don't have problems with Arabs. I can sit with them without the discount."