Accessibility links
In 'NOPI,' An Ottolenghi Cooking Journey From Middle East To Far East : The Salt Yotam Ottolenghi and his head chef Ramael Scully discuss NOPI, their latest cookbook. It's named for the popular London restaurant that Ottolenghi owns and where Scully is head chef. 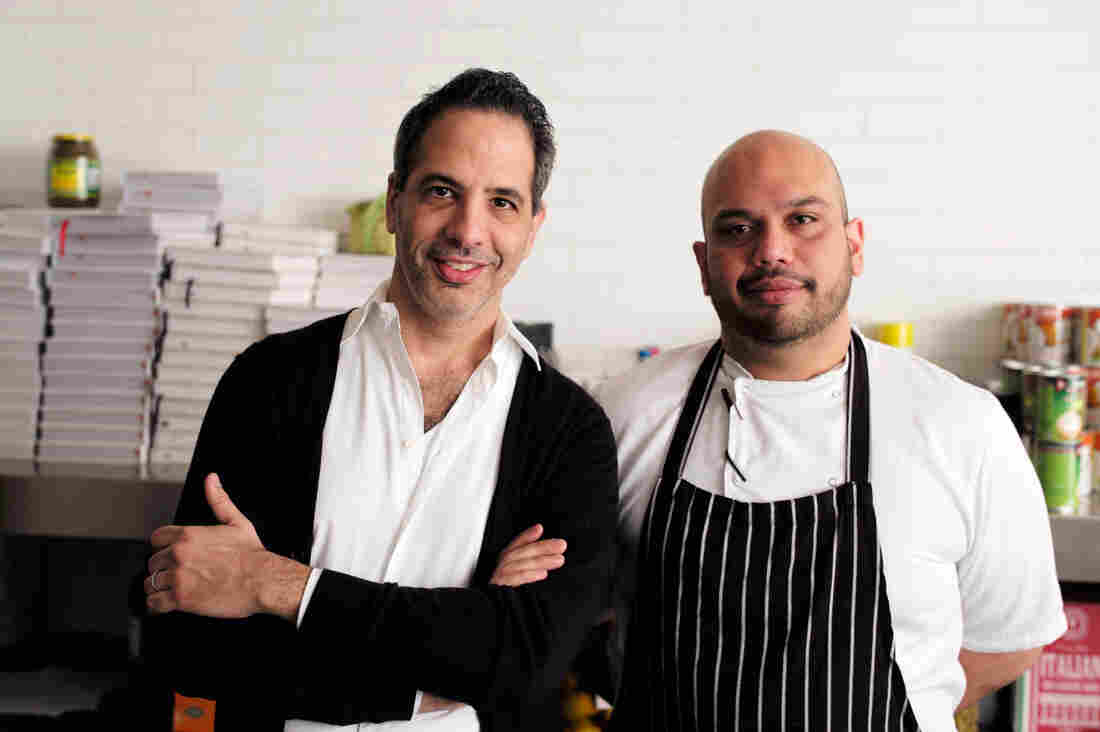 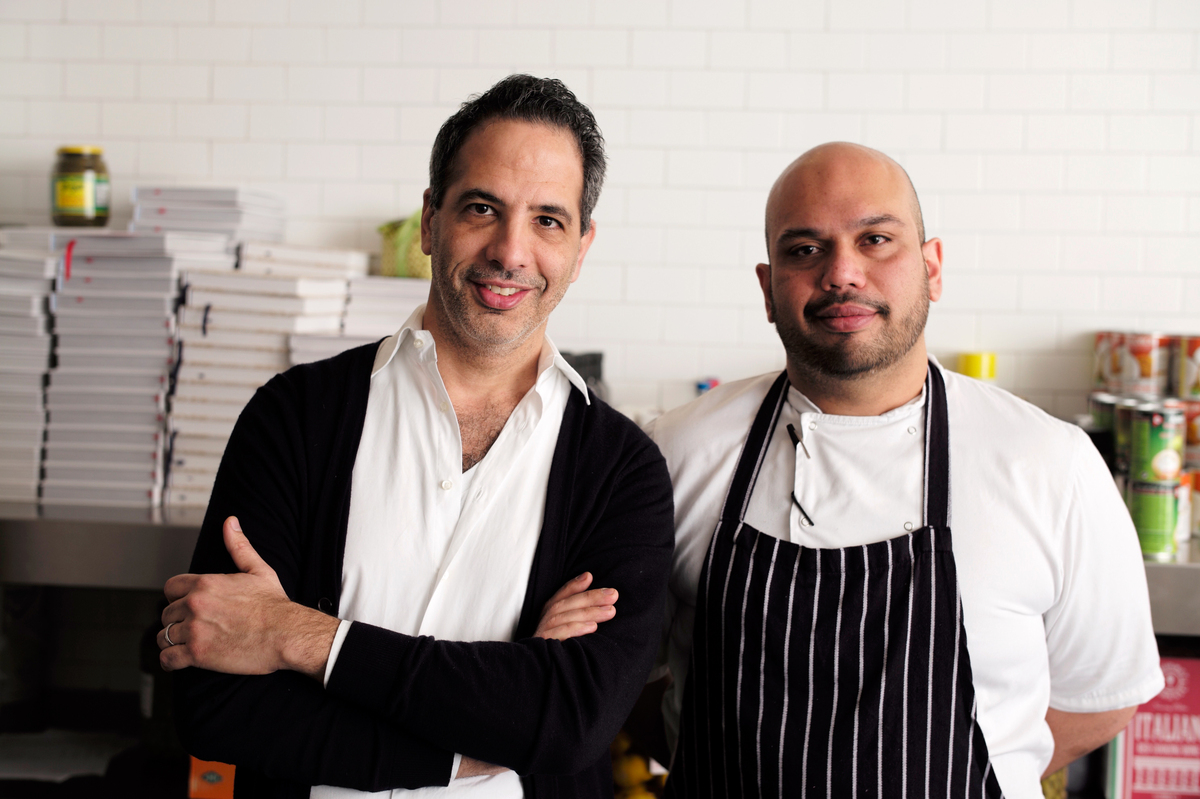 Yotam Ottolenghi and Ramael Scully, who co-authored the NOPI cookbook, out this week.

Yotam Ottolenghi is a star chef. His restaurants in London and his cookbooks offer dishes layered in flavor redolent of the Middle East and the Mediterranean, and they've earned him legions of fans around the world.

Out this week is his newest cookbook, NOPI, with recipes from his restaurant named for the London neighborhood north of Piccadilly Circus.

The dishes contain ingredients that are exotic: the hot relish known as sambal, and pandan, a fragrant green leaf found in Southeast Asia, often referred to as the "vanilla of the East." 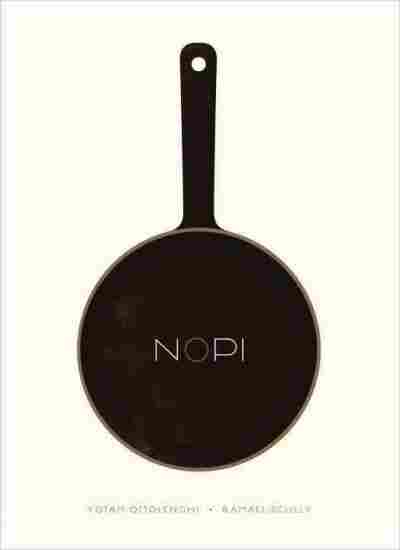 by Yotam Ottolenghi and Ramael Scully

Until Ottolenghi met Scully, he says, he knew very little about "the magical world of rassam, sambal and pandan," as he writes.

"I've never really been properly exposed to Asian food," Ottolenghi tells Morning Edition's Renee Montagne. "All this kind of very, very intense flavor and flavors and those ingredients put in the context of daily cooking I wasn't quite aware of. And Scully opened my eyes to a degree."

"Between my mother's side, I had eight aunties, and they all had different levels of cooking using different spices like the black cardamom to curry leaves, to mustard seeds to the yellow and black mustard seeds, and then my, on my father's side, my aunties ... showed me the Malay style of food, you know? So, by the time I left Malaysia, I had like a large range of basic Malaysian different styles, and when I met Yotam, it was just like all right, I've got so much to show you. Like, and we basically, the Middle Eastern guy, the Asian guy, we came together."

The two chefs have been working on and off for about 10 years now developing a distinct fusion.

One of their dishes is chicken that's based on what Ottolenghi calls "an Asian master stock, which is a stock that you keep at home — every Chinese family have this stock, and they cook and cook and cook in it, and it's flavored over time." 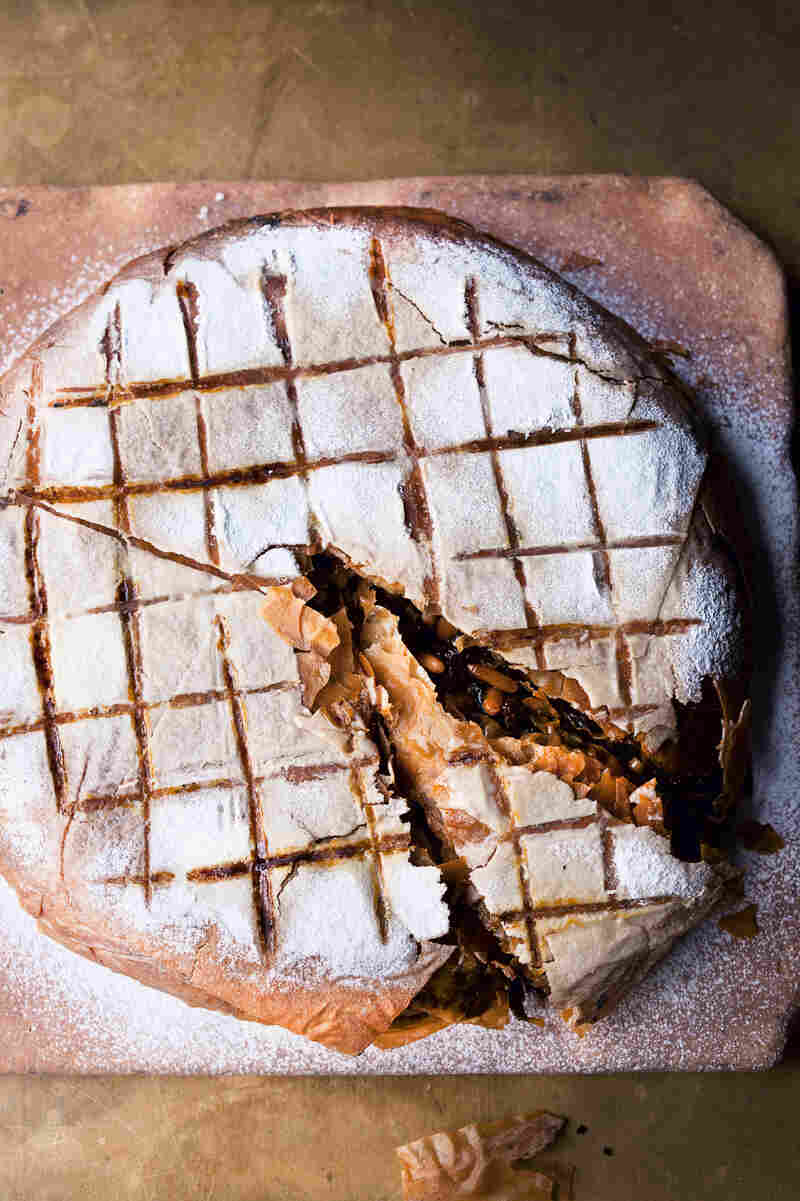 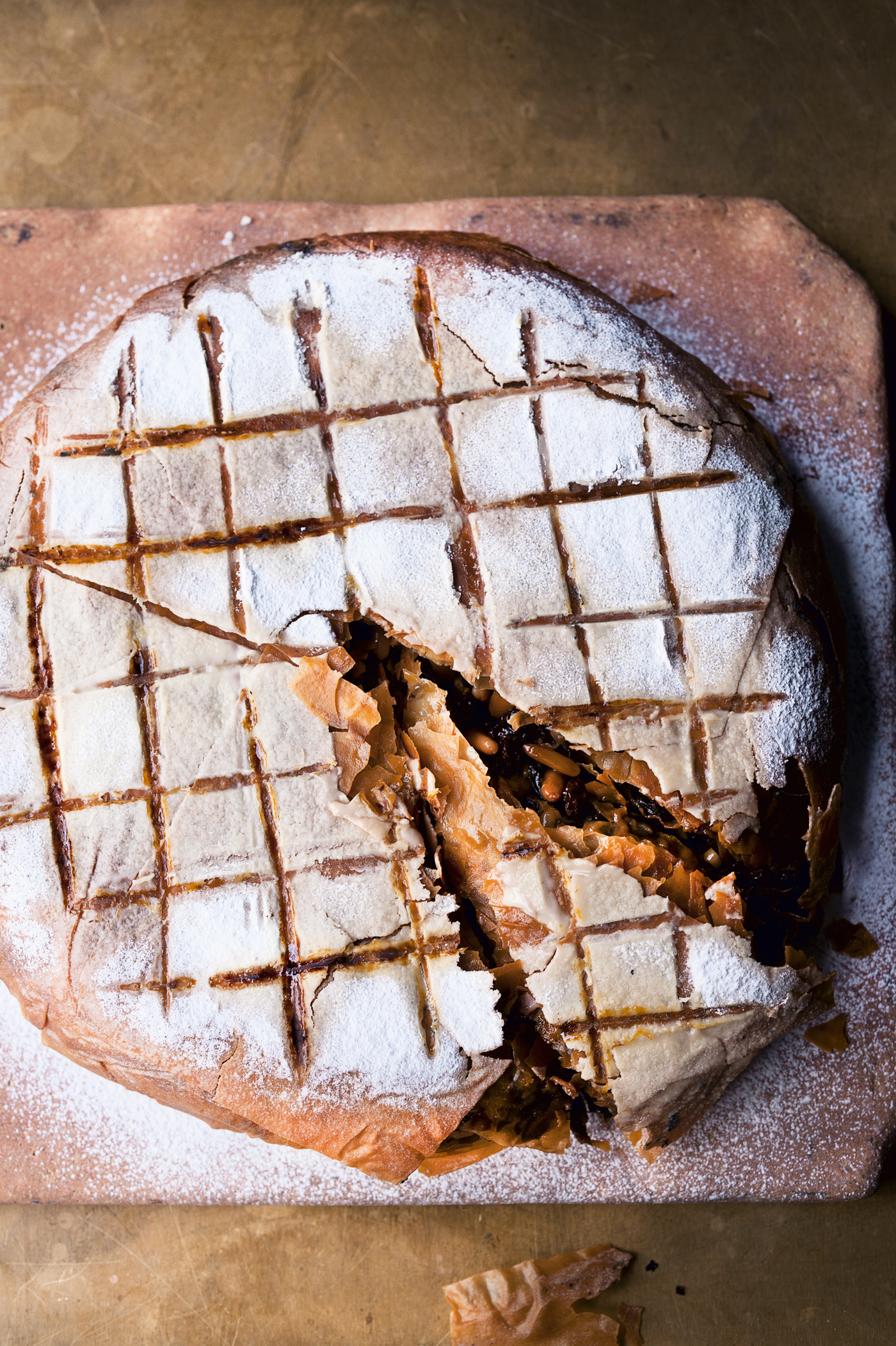 Chicken pastilla from NOPI: The Cookbook.

The cookbook includes a recipe for a master stock that's easier for the home cook than what they make in the restaurant. As for some of the ingredients listed in the book that might be hard to find — like pandan leaves or lemongrass or rosewater — Ottolenghi says, "people do go online for this specialty shopping, and I think also if you are in a big city it's always an adventure to go out to an ethnic shop, to shop of the culture that maybe you're not completely familiar with."

And, he adds, the recipes do include possible substitutes. "Pandan is a wonderful aromatic herb that works often in desserts and savory dishes all over Asia, but when you can't get it, we say, oh, well, use vanilla. It's another sweet thing that works very well in the Western context, but it does work in Asian dishes as well. So we're not fanatics about our ingredients."

For those who want a challenge, there are recipes in NOPI that are very complicated. Ottolenghi says, "I think they're worth your while." On of those is pastilla, "which is sort of a traditional Moroccan dish. We've actually added a few more elements [Catalan spinach, with paprika] to it. And it's a wonderful pie."

Scully adds that it's a great mix of "sweet and savory."

Pastilla is normally served with pigeon, and Ottolenghi says to try it that way. "Pigeon pie is really delicious, because pigeon meat is rich, so it really can be wrapped in a pie and you can add lots of stuff to it. I mean, these days, people mostly use chicken. But the hearty meats, the richer meats are actually better for pies than chicken. That's why we use the thighs, the fat."

It's just one of the examples, according to Scully, of how "we got the flavors right for the NOPI cookbook for home cooks, and that's very important for me to get that flavor as same as what we did in the restaurant."

1. Season the chicken pieces with 2 teaspoons of salt and a good grind of black pepper. Heat the sunflower oil in a large sauté pan and place over high heat. Add half the chicken pieces and sear for 7 to 8 minutes, turning once halfway through, until deep golden brown on both sides. Remove from the pan and set aside to cool while you continue with the remaining batch.

2. Keep the pan on the heat and add the onions and garlic. Cook over medium-high heat for 15 to 18 minutes, until the onions are soft, dark, and caramelized like jam. Keep a close eye on it toward the end and stir constantly, to make sure it does not catch on the bottom of the pan. Add the tomatoes, cinnamon, peppercorns, and dried chiles, along with 1/2 teaspoon of salt.

Continue to cook for another 4 to 5 minutes, stirring from time to time, then slowly pour over the brandy. Cook for a further 2 minutes, then return the chicken pieces to the pan. Pour over the wine and stock, reduce the heat to low and simmer, covered, for 1 hour. Remove the chicken pieces, increase the heat, and let the sauce bubble away for 30 to 35 minutes, until it has reduced by a quarter and has the consistency of caramel. Remove and discard the cinnamon stick and chiles, add the chocolate and cook for 2 minutes, stirring often. Remove from the heat and set aside to cool: you should have about 2 cups/500 ml in the pan.

3. Once the chicken is cool enough to handle, use your hands to pick all the meat off the bones. Return the meat to the sauce, stir gently and set aside.

4. To make the Catalan spinach, pour the sherry vinegar and brandy into a small saucepan and place over medium-low heat. Warm through for 5 minutes, then remove from the heat. Stir through the currants and set aside to cool. Mix the pine nuts with 1 teaspoon of oil and the paprika and set aside. Pour the remaining oil into a very large sauté pan, place over medium-low heat and add the shallots. Cook for about 8 minutes, until soft and lightly colored. Add the garlic, along with 1 teaspoon of salt, and cook for a further 2 minutes. Add the currant and brandy mix along with the pine nuts, and cook for 2 more minutes. Pour in the cream, increase the heat and cook for 3 minutes, to reduce the sauce by a quarter. Stir in the spinach and cook for 3 to 4 minutes, uncovered, for the leaves to wilt and for the liquid to evaporate so that there is about 2 tablespoons left in the pan.

6. Brush the bottom and sides of a large deep ovenproof sauté pan—around 10 inches wide and 3 inches deep—with about a tablespoon of the melted ghee. Brush the first sheet of filo pastry and line the base of the pan. Continue with the next sheet, generously overlapping as you go, and leaving about a 3-inch overhang over the edge of the pan with each sheet. Work quite quickly here, so that the pastry does not dry out, brushing each sheet liberally with the melted ghee. Continue until you have used two-thirds of the pastry sheets, then spoon the spinach mixture into the pan. Spread the chicken on top, then continue with the remaining pastry sheets, tucking these ones into the pan, as though making a bed with fitted sheets. Continue until all the filo has been used before drawing in the overhanging pastry sheets and sealing them on top of the pie with a final brush of the melted ghee.

7. Place in the oven and cook for 1 hour, uncovered. Cover with foil and cook for a final 10 minutes, so that the bottom gets golden brown without the top burning. Remove from the oven and set aside for 10 minutes before inverting the pastilla onto a platter. Sprinkle over the confectioners' sugar through a fine-mesh sieve, and serve warm as is. You can also make a mesh pattern on top of the pastilla by heating up a metal skewer with a blow-torch until red hot. Create parallel lines by burning the sugar in straight lines, spaced 3/4 inch apart and then repeating at a 90° angle.