Accessibility links
Gossip Girls: Tea Parties And The Sexist Slang They Inspired : The Salt Tea drinking has long been synonymous with female tittle-tattle. Though men drank as much tea and gossiped as avidly as women, it was the latter who got stuck with the bad rap.

Gossip Girls: Tea Parties And The Sexist Slang They Inspired

Gossip Girls: Tea Parties And The Sexist Slang They Inspired 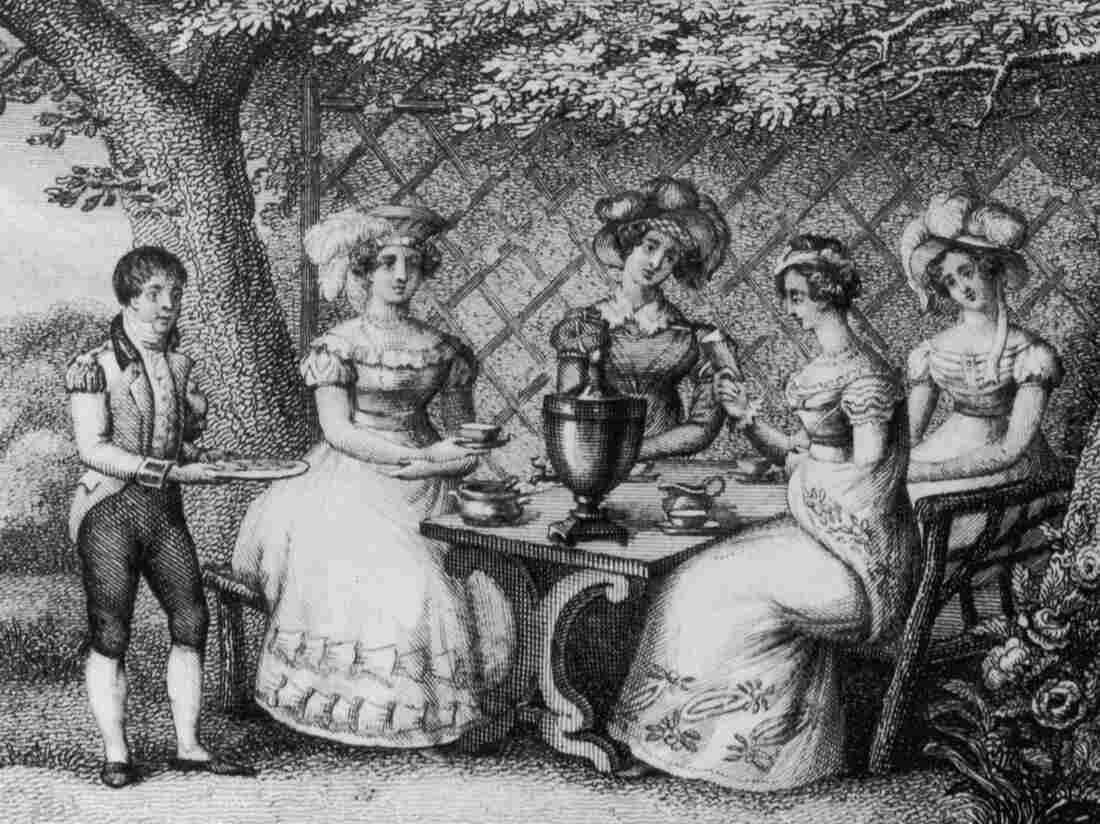 For centuries, tea drinking has been synonymous with female tittle-tattle — even though men drank just as much tea. Old dictionaries of English slang provide colorful proof of this association. Hulton Archive/Getty Images hide caption 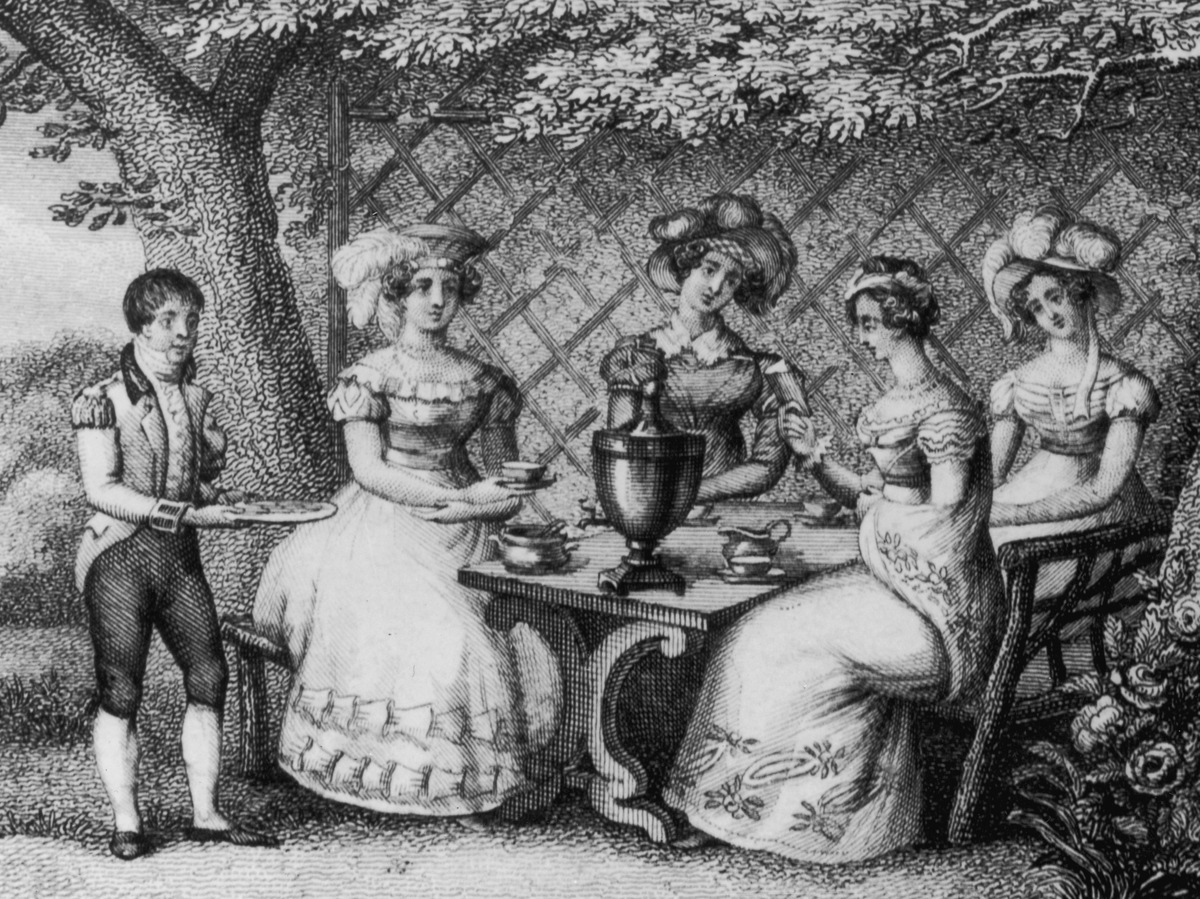 For centuries, tea drinking has been synonymous with female tittle-tattle — even though men drank just as much tea. Old dictionaries of English slang provide colorful proof of this association.

Editor's note: There is an offensive word in this post. It's an important part of this discussion.

What goes best with a hot cup of tea? A heaping spoonful of gossip, of course.

Almost from the time tea was popularized in England in the 1600s by Charles II's Portuguese wife, Catherine of Braganza, tea drinking has been synonymous with female tittle-tattle. One reason for this was that "giving a tea" started out as an exclusively female ritual. But, mainly, it was good old sexism at work. Although men drank as much tea and gossiped as avidly as women, it was the latter who got stuck with the bad rap.

Old dictionaries of English slang provide colorful proof of this association, especially Francis Grose's salty 1785 opus, A Classical Dictionary of the Vulgar Tongue. Grose was a larger-than-life eccentric with a keen ear for London's idiolects. He reveled in taking midnight walks through the city with his assistant Tom Cocking to eavesdrop on the conversations of sailors, workers, tramps and harlots in the dockyards, slums and taverns of London. His rich nocturnal pickings were compiled into his dictionary.

Tea has numerous entries in Grose's dictionary. Among other things, it is called "prattle broth," "chatter broth," "scandal broth," and "cat lap." British slang lexicographer Jonathon Green told The Salt in an email that cat lap could refer to a feline, but it could also "be cat: a gossipy (old) woman, since that sense was definitely in use in late 18th century."

The other tea-related phrase was "to bitch" — a colloquial way of saying "to make tea"; its variations were to "stand bitch" and "bitch the pot," meaning to preside as hostess at a tea party. According to Grose, bitch was "the most offensive appellation that can be given to an English woman, even more provoking than that of whore." In an 1811 publication called The Fools' Dictionary, by Dr. H. Clarke, "slop" was added to this list: "How the blowens lush the slop. How the wenches drink tea!" Blowens, by the way, was slang for whore or mistress.

A century later, bibliophile John Camden Hotten's posthumous 1874 The Slang Dictionary: Etymological, Historical, and Anecdotal described a "tabby party" as "a party consisting entirely of women, a tea and tattle gathering." It also noted that "bitch party" was "a term favored by college students for tea drinking." Green provided two other examples of the term used in Cambridge University, one of which was "He goeth to a small bitch-party." Evidently, it wasn't just the lowlifes who uttered this sexist slang.

The eminent writers of the day lost no opportunity to link tea with vapid female chatter and loose character. Richard Steele, founder of the society journal The Tatler and avid drinker of Bohea and green tea, started sister periodicals called The Tea-Table, Chit Chat and The Spinster. A year after Grose's dictionary was published, a variation of the term "scandal broth" appeared in Scotsman Robert Burns' poem, The Twa Dogs: A Tale, in a stanza parodying society ladies who pretend to be as gracious as sisters but think spiteful thoughts as they "sip the scandal-potion pretty."

"Grose was a great friend of Burns," says Green, "who wrote poems about him when he visited Scotland."

"Love and scandal are the best sweeteners of tea" is the much-quoted line from Love in Several Masques, the satirist Henry Fielding's first play. It ran for a few nights and was not revived, but the line above, uttered by Lady Matchless, survived. In another Fielding restoration comedy, Rape Upon Rape, which was made into the 1959 musical Lock Up Your Daughters, a drunken misogynist named Sotmore loathes women for being "a parcel of tea-drinking sluts." "If I had a daughter that drank tea," he says, "I would turn her out of doors. The reason men are honester than women is, their liquors are stronger."

But no one attacked tea with more spleen than the prominent political writer and pamphleteer William Cobbett (who, incidentally, coined the term "red herring"). If Grose tramped around at midnight, Cobbett rode around the country to glean the goings-on in England's hamlets. In 1822, he published Cottage Economy, a manual to help the cottager be self-sufficient by making his own bread and beer, and living off his livestock. It also contained a thundering anti-tea jeremiad: "The gossip of the tea-table is no bad preparatory school for the brothel," Cobbett declared. "The girl that has been brought up, merely to boil the tea kettle, and to assist in the gossip inseparable from the practice, is a mere consumer of food, a pest to her employer, and a curse to her husband, if any man be so unfortunate as to affix his affections upon her."

Two hundred years later, the tea-and-tattle connection is alive and steaming — though the sexist overtones are less overt. Office surveys name tea drinking as a chief time-waster, along with texting and emailing. A few years ago, a tea company decided to "own" the connection by launching "Gossip Tea-Organic Moroccan Mint." The brand advertises itself as "a robust combination of gunpowder tea and peppermint that goes together like Tom and Katie. Or Ben and Jen. Or Brad and Angelina." As any tea-drinking descendant of Lady Matchless would know, that ad is embarrassingly out of date.