Accessibility links
Mr. Chef Goes To Washington: Cooks Learn To Lobby Congress On Food : The Salt As food policy gets more attention in Washington, lobbying groups are training chefs to stir up Congress. The hope is that they'll sway lawmakers on issues like school lunch and GMO labels. 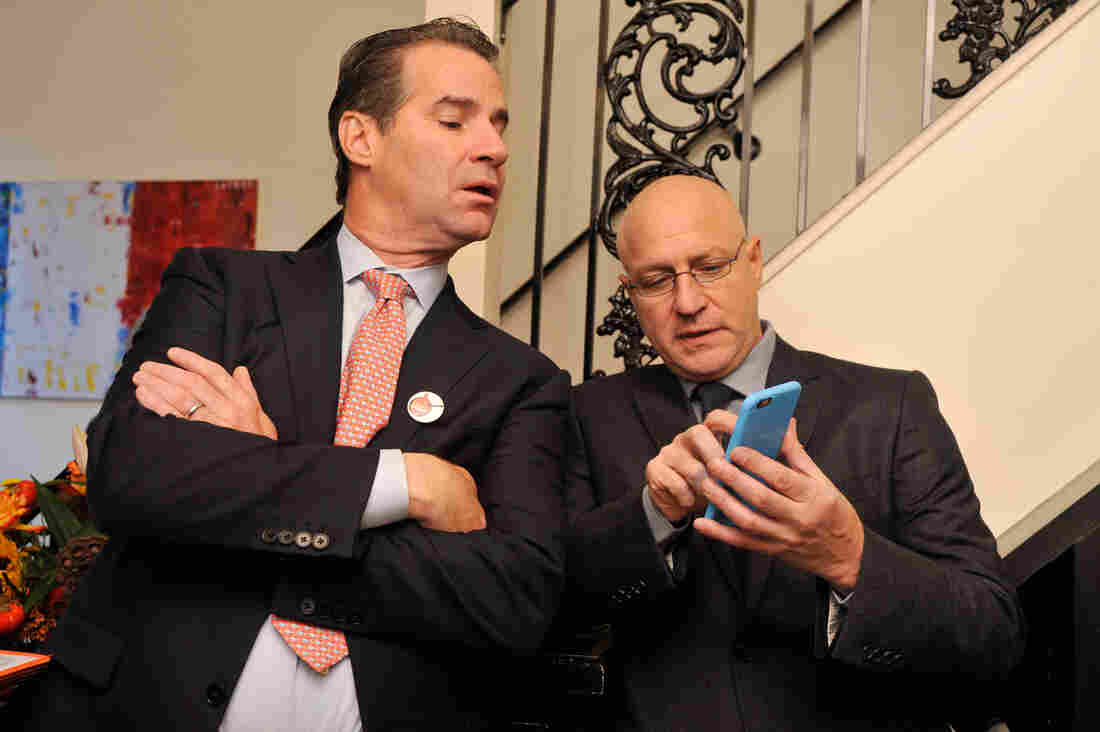 Chefs Kerry Heffernan and Tom Colicchio pose for a photo at Bearnaise, a Capitol Hill restaurant, on Tuesday before setting out for a day of lobbying lawmakers. Kris Connor/Getty Images hide caption 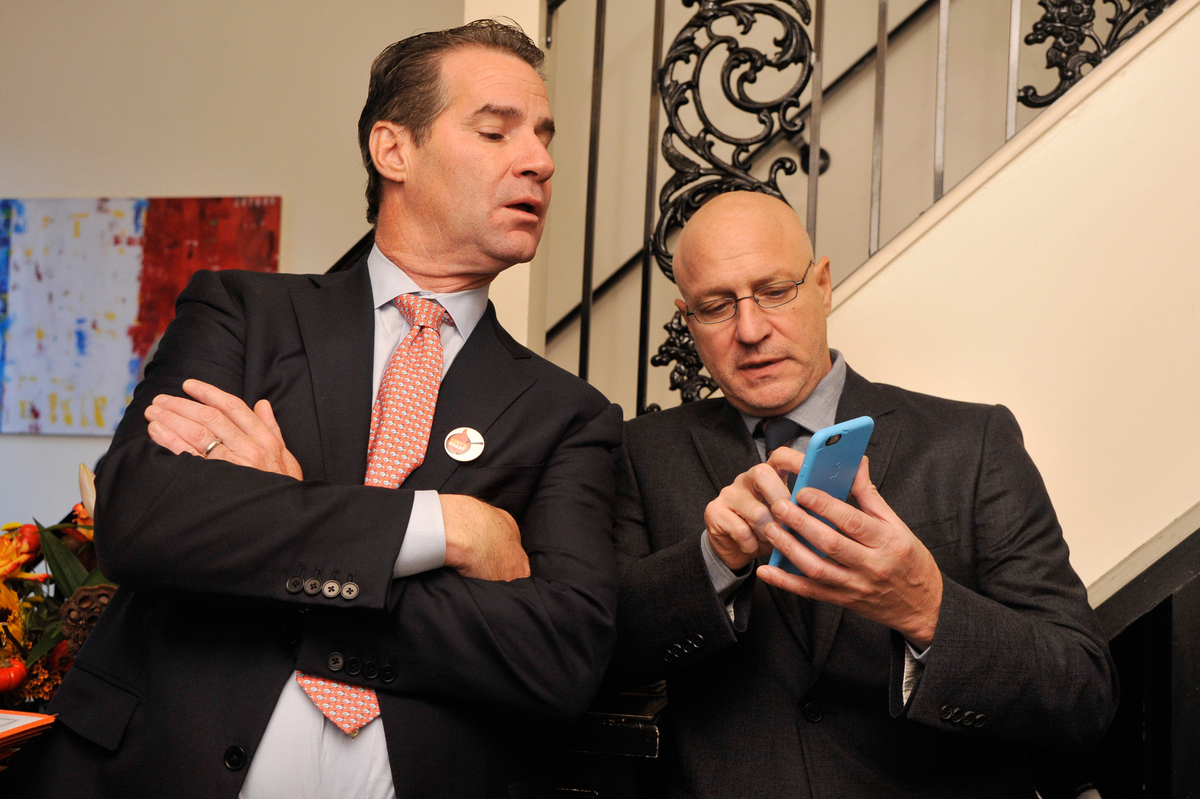 Chefs Kerry Heffernan and Tom Colicchio pose for a photo at Bearnaise, a Capitol Hill restaurant, on Tuesday before setting out for a day of lobbying lawmakers.

Earlier this week, several dozen chefs from around the country gathered to hear words of wisdom from Tom Colicchio.

"Have fun with it," Colicchio, a celebrity chef and award-winning restaurateur, told them, adding, "Let your passion come through."

But this wasn't the next batch of hopefuls on Top Chef, the feisty cooking show on which he stars. We were in a Capitol Hill restaurant, and this was a new generation of lobbyists.

As food issues inch up the political agenda, chefs are speaking up on issues from school lunch to sustainability to labeling GMOs in food. Now some lobbying groups are training chefs to stir up Congress as well.

Chefs spend so much time "making great decisions about who they source from, where they get their produce, or how they market their food," says Katherine Miller, a former Democratic campaign strategist who leads the Chef Action Network, a nonprofit that teaches chefs how to become advocates for change in the food system. Because of that, "chefs are some of the most trusted sources on food ... We wanted to activate them," she says.

Activate? Kind of like The Manchurian Candidate, the classic thriller novel about a sleeper agent? "Totally – that's what they're like," Miller says, laughing.

Since 2012, CAN — along with the James Beard Foundation — has put 109 chefs through three-day boot camps that drill them on advocacy and provide media training. That includes using their often large social media followings to raise awareness of food policy issues.

On Tuesday, many veterans of the program were in Washington, D.C., to test out their skills. Their mission: to sway lawmakers to vote to preserve the healthier federal school lunch standards put in place five years ago. The Child Nutrition Act, the bill which funds the school meal program, among other things, is currently up for reauthorization.

The School Nutrition Association, a group that represents some 55,000 school food professionals, has been lobbying Congress intensely to roll back nutrition standards for school meals. SNA argues that more healthful meals have made it tougher to attract paying students to the lunch line, and as a result, cafeterias are losing money.

The chefs tried to counter those arguments with some good old-fashioned face time.

Before the group headed off for a day of meetings with lawmakers on the Hill, Colicchio offered the newly minted lobbyists some rebuttal tips: Don't get stuck on facts and figures. Stick to your message – "It's more about being passionate about taking care of children, this idea that we're sending kids to school to learn, and without good nutrition they're not going to learn. Stick to that," he said.

"We're the adults," Colicchio added. "The idea that kids don't like this – well, what kid actually did like school lunch?"

It was Honolulu chef Lee Anne Wong's first time lobbying D.C. lawmakers. She's an alumnus of both Top Chef (season 1) and the boot camp, and she says the training she received from the latter has helped her focus on advocating for the local issues she cares about — like food security and sustainability (Hawaii imports 90 percent of its food) and creating an economy that supports local fishermen.

"The training helps to give us direction and vision," Wong says. "It's pinpointing the small things that can be achieved."

New York chef Bill Telepan is well-versed in the school lunch wars. Since 2008, he's been executive chef of Wellness in the Schools, a nonprofit that promotes healthful eating and exercise in New York City's public schools. He's met with lawmakers in past years, but even so, he says, the boot camp he attended earlier this year upped his game. 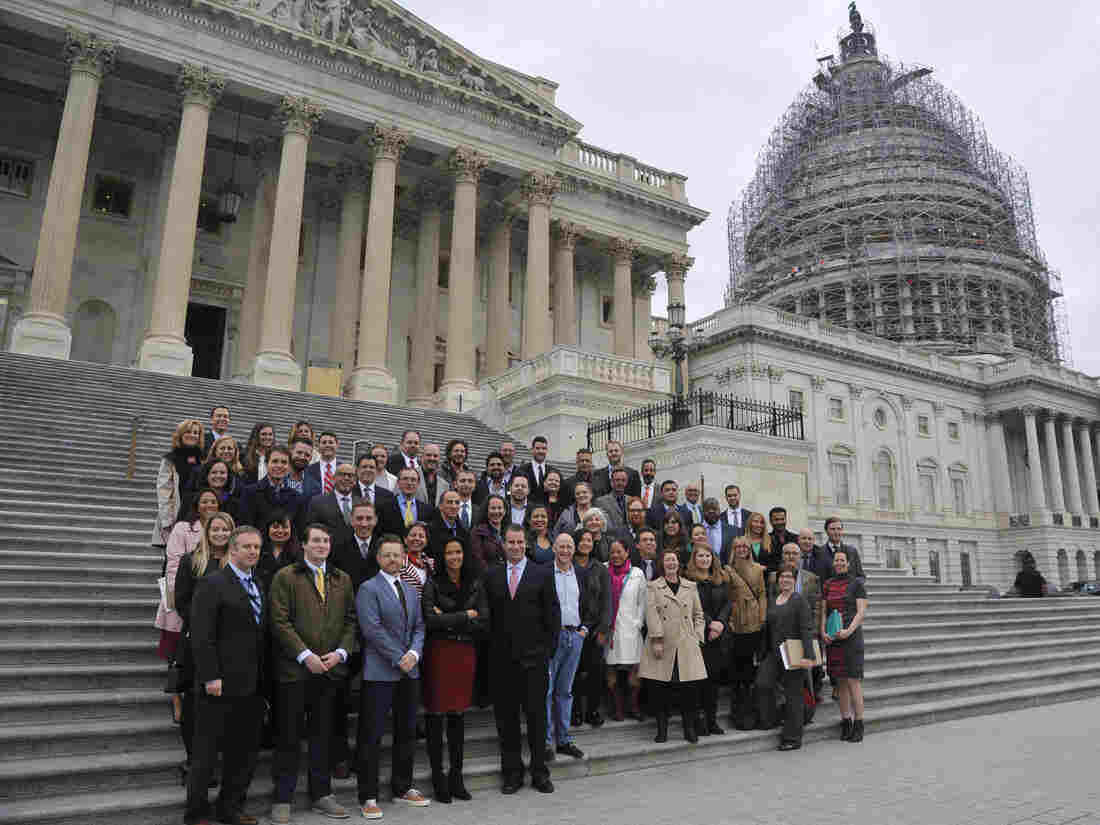 A group including Top Chef stars Tom Colicchio and Padma Lakshmi and several dozen chefs from around the country pose for a photo on the Capitol steps as they came together for a day of action and advocacy on the Hill. Kris Connor/Getty Images for Chef Action Network hide caption 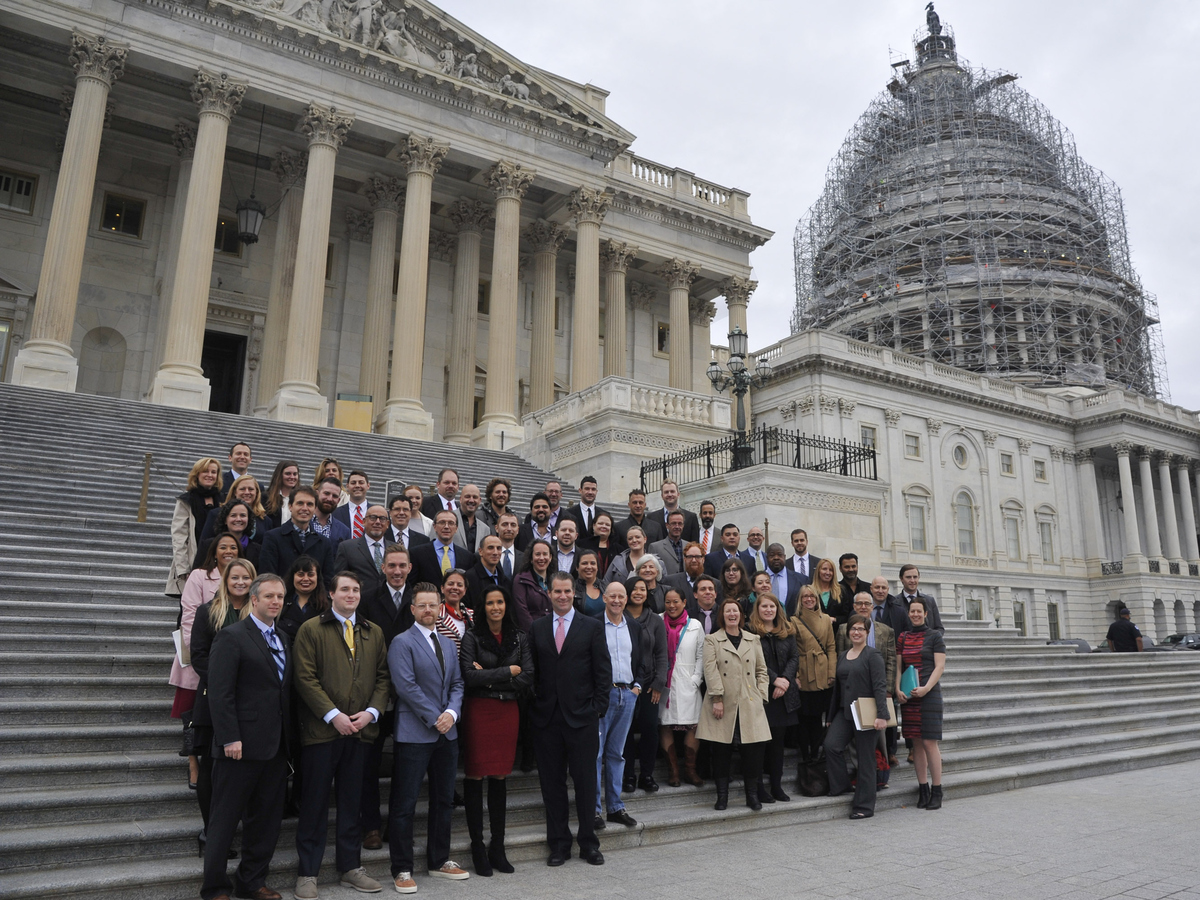 A group including Top Chef stars Tom Colicchio and Padma Lakshmi and several dozen chefs from around the country pose for a photo on the Capitol steps as they came together for a day of action and advocacy on the Hill.

"We're chefs," Telepan says. "We don't [normally] face Congress to fight for something. ... It kind of takes you out of your element, very much. And so what the boot camp does is put you in a situation where you can learn and make mistakes and just be able to talk to these people who may not agree with you."

All told, 45 chefs attended 120 meetings with House and Senate lawmakers on this day. Just showing up in person can make a difference, Miller tells them. Last year, she notes, another delegation of chefs came to the Hill to push back against Republican efforts to roll back school lunch standards. The effort ended up not coming up for consideration — which, she says, is a win.

Of course, the goodwill that chefs – especially celebrity ones – engender may only go so far. As Rep. Rodney Davis, an Illinois Republican, told us by email after meeting with Colicchio, "Tom and I have the same goal of encouraging healthy eating and introducing kids to more fruits and vegetables, but I've seen firsthand at the schools I represent that new school lunch regulations are making this goal nearly impossible."

Davis says loosening "the most stringent whole grain and sodium requirements" will lead to "healthy meals that students will actually eat." (Davis got a rating of just 24 out of 100 from Food Policy Action, the nonprofit Colicchio founded that ranks lawmakers on their record on food issues and co-sponsored Tuesday's lobbying events.)

But, unlike at debate camp, it seems this conversation will keep going after the buzzer goes off.

"While we may not see eye-to-eye on everything," Davis says, "Tom has expressed interest in visiting schools and discussing this issue with administrators in my district and I hope we can make that happen."