Accessibility links
Tainted Treats: Racism And The Rise Of Big Candy : The Salt Halloween's iconic candy corn first appeared in stores in the 1920s. The decade saw a boom in the retail candy business — and in advertising and production divided along racial lines.

Women operate a gum-wrapping machine, circa 1923. It was a pivotal decade in the rise of America's retail candy business. Underwood & Underwood/Corbis hide caption 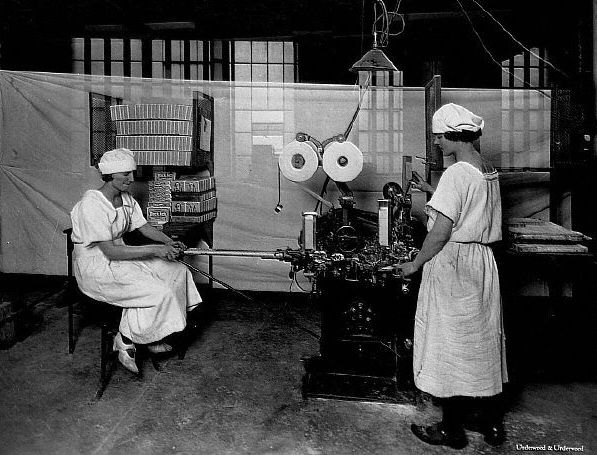 Women operate a gum-wrapping machine, circa 1923. It was a pivotal decade in the rise of America's retail candy business.

Candy corn is as ubiquitous at Halloween as tiny witches and skeletons knocking on neighborhood doors. And it turns out the story of how this and other sweet treats came to dominate the ghoulish holiday is a bittersweet one – in which enterprise and racism are as intertwined as the layers of a rainbow lollipop.

The roots of America's candy boom lie in the 1920s. Sugar trade routes that had been disrupted during World War I were once again open for business. The result: a glut of sugar that led to a steep crash in prices.

"Sugar was suddenly very, very cheap," says historian April Merleaux, whose new book, Sugar and Civilization, explores the cultural politics of sweetness. "This was a mess for farmers in the mainland United States, Cuba, Puerto Rico, and elsewhere. But it was a boon for the candy business."

Several factors lay the groundwork for the rise of "Big Retail Candy" that decade. As the 1920 Census registered, it was the first time a majority of the U.S. population was living in cities. With urbanization, higher wages and low unemployment, households began to buy more processed food. An early casualty: homemade sweets. Doughnuts, taffy and apples draped in caramel sauce began to be jettisoned in favor of store-bought candy. The iconic candy corn – those "inch-high" treats "roughly mimicking the appearance of corn kernels" — first appeared in stores during this decade, according to The Oxford Companion to Sugar and Sweets.

And then there was Prohibition: Basically, folks were swapping one vice – alcohol – for another. "People at the time often said that candy and soda consumption was increasing because of Prohibition," Merleaux tells The Salt.

What's more, she says many U.S. soldiers had returned from WWI with a sweet tooth, thanks to candy included in their wartime rations. "This helped spread the candy habit beyond the women and children who had previously been assumed to be the main consumers," Merleaux says.

One man who played a pivotal role in developing candy retail during this era was Herbert Hoover – not as president, but in an earlier role as head of the Department of Commerce.

And one of the main thrusts of these collaborative campaigns was making more holidays candy-centric.

"At the beginning of the 1920s, Easter and Christmas were easily associated with candy," says Merleaux. "But this meant that candy makers' business was highly seasonal. They desperately wanted to level out demand, so that they could sell candy year round. They tried to turn a handful of holidays – George Washington's birthday, St. Patrick's Day and July Fourth – into candy holidays. None of these succeeded." 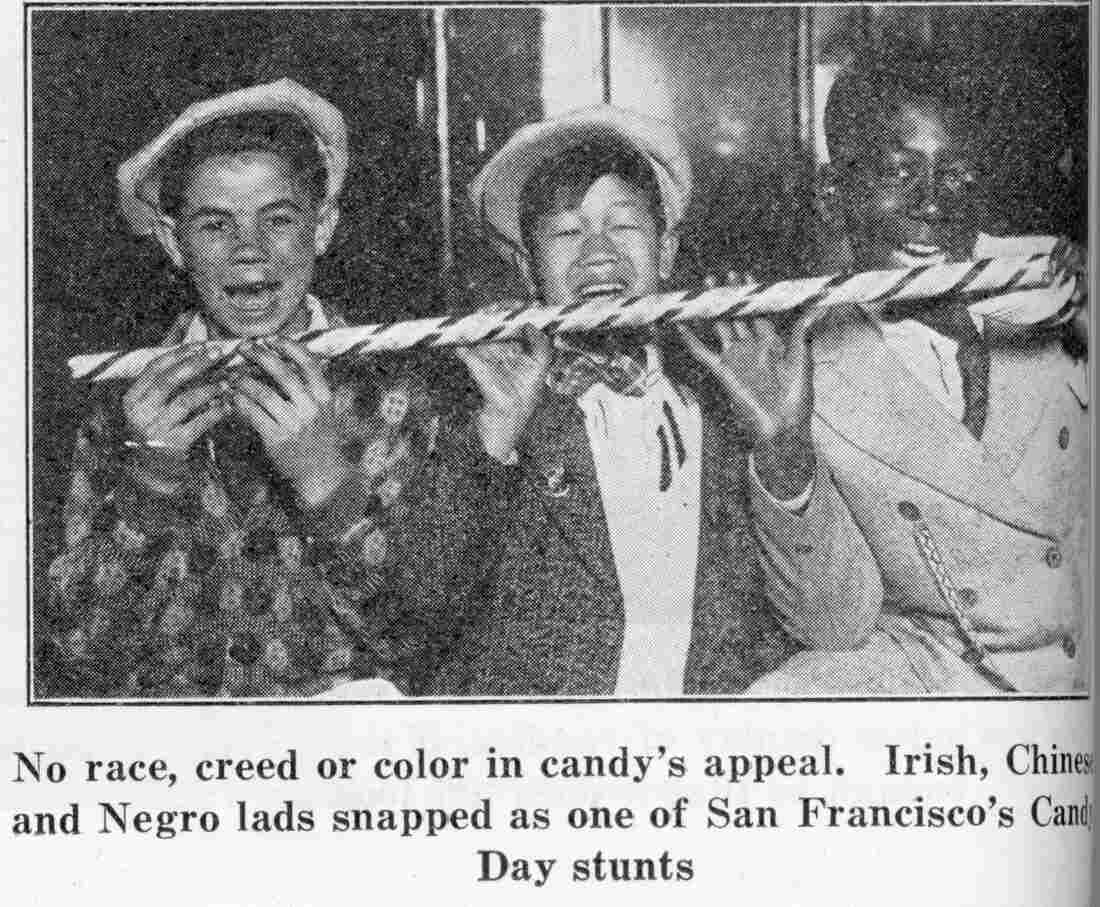 An ad of the era features a trio of "Irish, Chinese and Negro lads" chomping on a long peppermint cane. The image was a direct reference to pictures of barefoot black and Caribbean children sucking on sugarcane, which were common in the 1900s. Western Confectioner hide caption

But with Halloween, the candy link stuck, perhaps because of the season's "older, residual associations," she says, like the Day of the Dead, and the long tradition of eating apples – including candied ones – at autumn time.

But candy also had its bitter side.

The candy market was a racially differentiated one. The more expensive varieties, such as hand-dipped chocolate bonbons, were aimed at young white women and middle-class children. The cheap stick candy, meanwhile, was targeted at African-American and immigrant Irish and Chinese children.

One advertisement of the era featured a trio of "Irish, Chinese and Negro lads," in the ad's own language, chomping on a long peppermint cane with the triumphant tagline: "No race, creed or color in candy's appeal." The image, Merleaux says, was a direct reference to pictures of barefoot black and Caribbean children sucking on sugarcane, which were common in the 1900s.

These pictures often carried captions like "native sugar-mill" and "native cane grinder." This may have been an unrefined way to eat sugar, but it proved to people at the time that it was "natural" to eat sweets, says Merleaux. Civilized children, of course, would eat little white refined cubes with silver tongs, she says.

And she says the same race lines were maintained in the production of candy. African-American women were employed in factories making cheap candy, while only young white women were employed to hand-dip candy in warm chocolate, since it was such an intimate act. 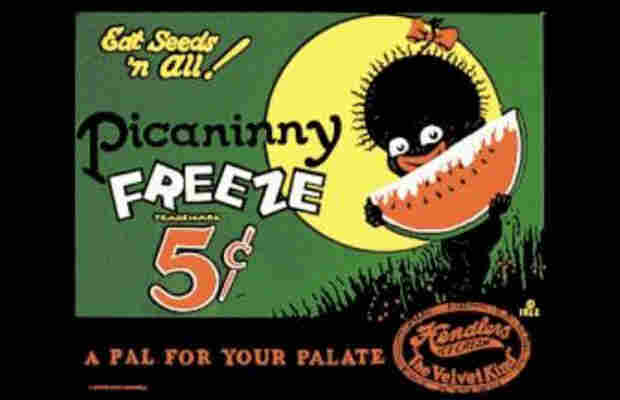 Ads for sweets in the 1920s drew on long-standing racial stereotypes. One of the more grotesque examples: The ads for the Hendler Creamery Company's Picaninny Freeze featured a racist caricature of a young black girl eating watermelon. Wikimedia hide caption 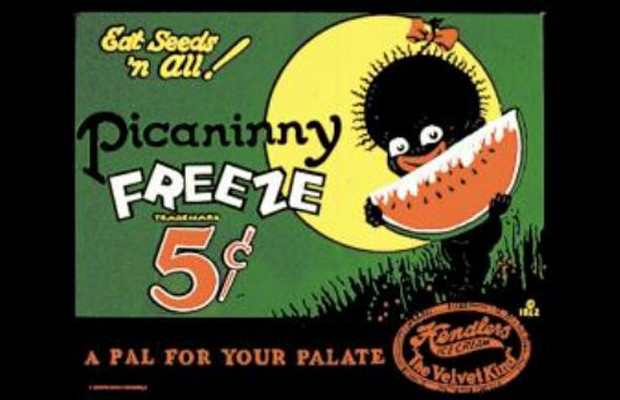 Ads for sweets in the 1920s drew on long-standing racial stereotypes. One of the more grotesque examples: The ads for the Hendler Creamery Company's Picaninny Freeze featured a racist caricature of a young black girl eating watermelon.

Confectioners in the 1920s drew on long-standing racial stereotypes in their joint advertising campaigns. One of the more grotesque examples: ads for Picaninny Freeze, a 5-cent frozen dessert from the Hendler Creamery Co. (Picaninny is an offensive term for a small black child.) Though the product was a strawberry ice cream dotted with chocolate seeds, the ad featured a caricature of a young black girl, with oversized red lips, chomping on a huge slice of watermelon – a fruit laden with racist associations — with the slogan: "Eat, seeds 'n all!"

In 1923, a confectioner in Portland, Ore., came up with a candy called "nigger's toes." The ad had a cowboy in blackface whose feet were oversized Brazil nuts dipped in chocolate.

"I call it the Jim Crow candy hierarchy," says Merleaux of these race-based confectionary advertisements.

The other problem with the rise of store-bought sugar and candy consumption was that it was part of a cycle of debt for African-Americans, says Merleaux. The great black intellectual and activist W.E.B. Du Bois, for example, saw a direct link between sugar and other store-bought foods that black sharecroppers were enticed to buy, and the growing debt ensnaring them.

It's a bitter history to chew on as we usher in America's biggest candy holiday.