Accessibility links
In Peru, Folk Remedies Like Frog Smoothies Are Comfort Food : The Salt Peru's capital, Lima, has a witches market that boasts a smorgasbord of charms and salves that hawkers promise will cure any ailment. 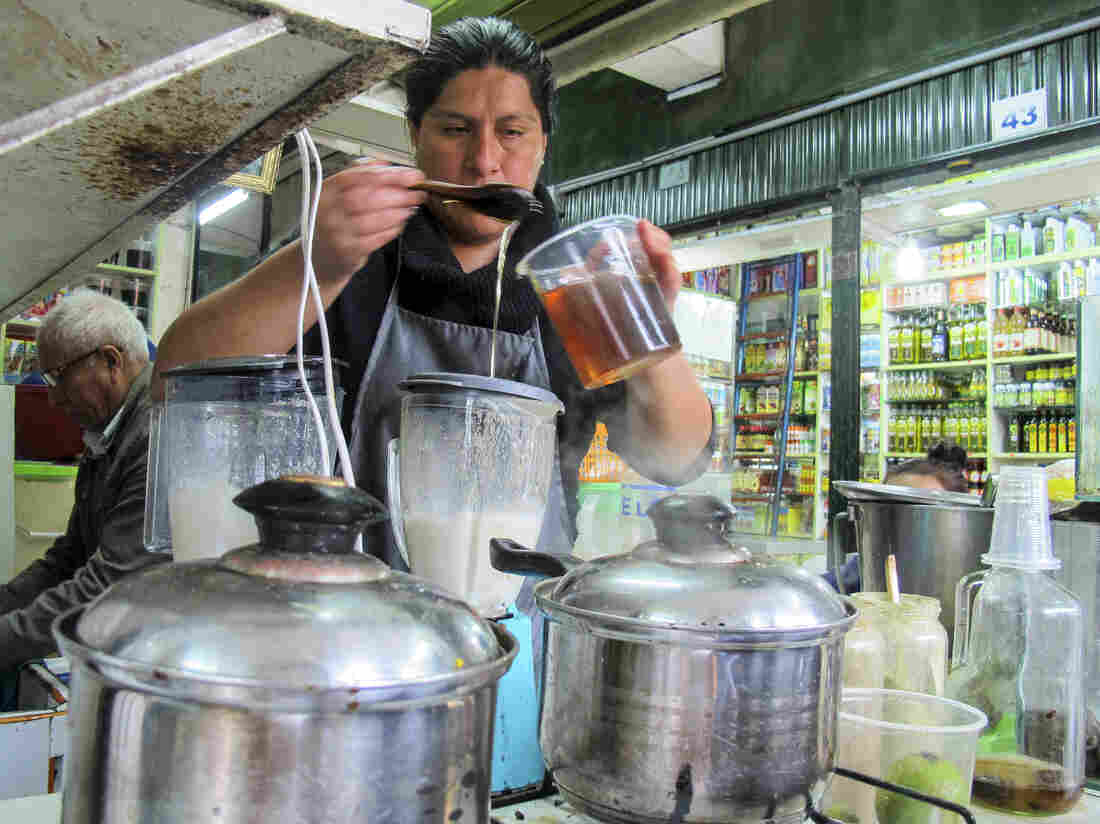 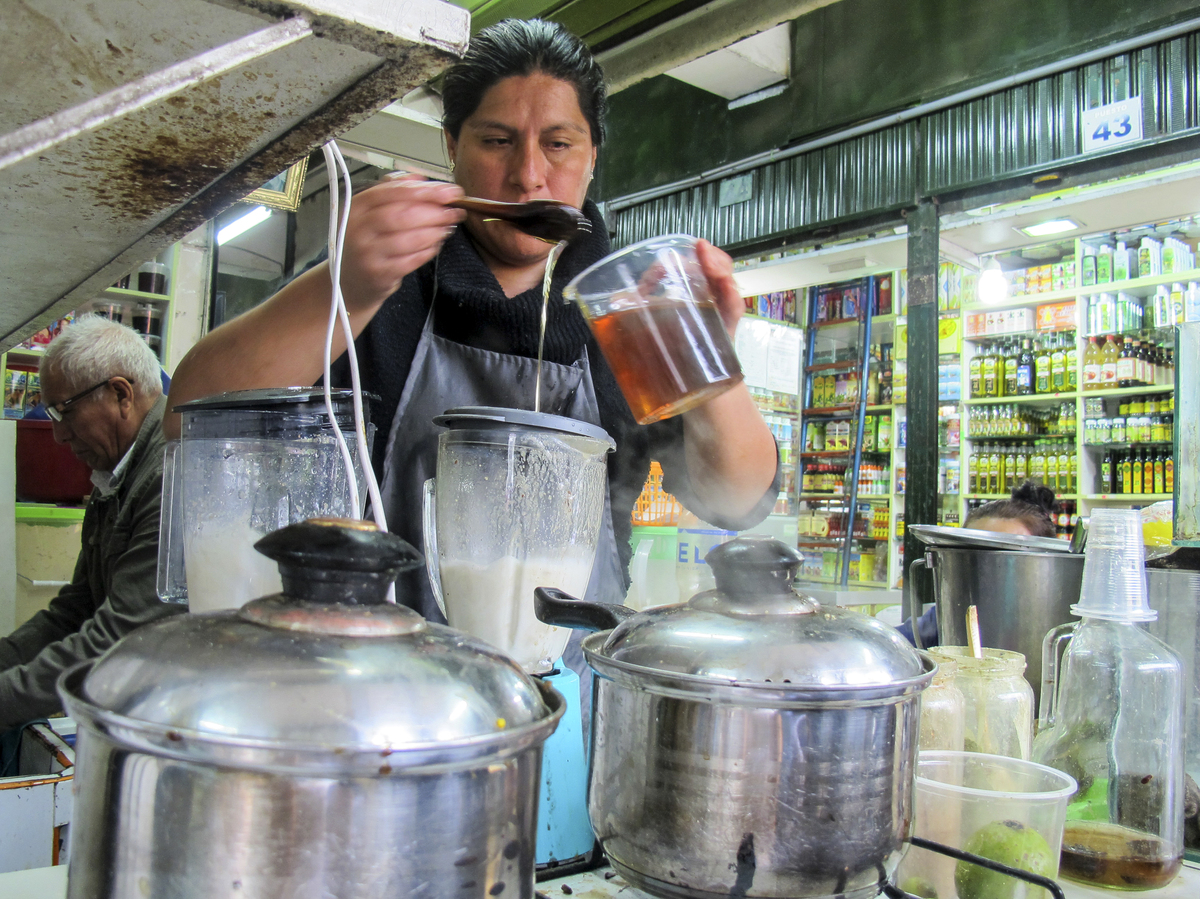 Jackie Rodriguez Peña prepares a frog smoothie at her stand at the Mercado de las Brujas in Lima, Peru.

And then there are the frog smoothies. That's right, a smoothie made from an entire frog (plus some fresh fruit) for a few dollars. A few blocks from the smoothie stand, vendors hawk small vials of grasa de culebra, or snake fat. Like the smoothies, the snake fat is said to have healing properties – for broken bones, fractures and ovarian and back pain.

The witches market is full of Peruvian delicacies like this, which double as food and folk medicine. Peru is known for its shamans and healers, and some the most exotic remedies can be found right here.

Jackie Rodriguez Peña is working at the corner shop that churns out amphibious delicacies. She says she makes the frog smoothies because her mother, Maura Peña Atencio, made them. Now she's carrying on the tradition. 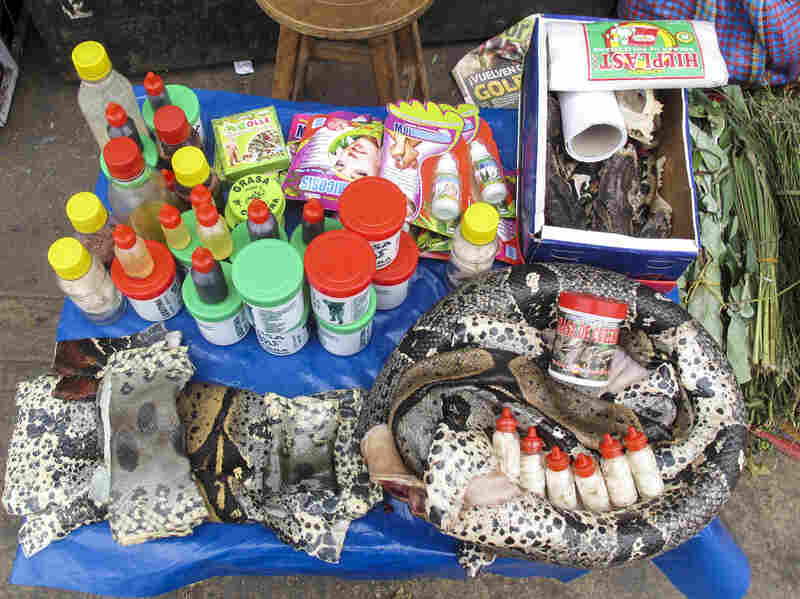 A vendor hawks grasa de culebra, or snake fat, said to have healing properties – for broken bones, fractures and ovarian and back pain. Mollie Bloudoff-Indelicato for NPR hide caption

Rodriguez Peña points toward the tank of frogs, rattling off an impressive number of ailments that they will cure from infertility to healing ulcers. (There's no scientific evidence to bolster any of the claims about frog smoothies.)

In Peru, frogs are a symbol of fertility, says Christine Hastorf, a food anthropologist at the University of California Berkeley. Frog imagery in the Andes is ceremonial and dates back to the days before the Inca conquered the country.

Hastorf says it makes sense that Peruvians turn to foods like frog smoothies when they're feeling unwell. And even if it doesn't boost your fertility, Hastorf adds, frog is a source of protein, which, when added to the sugar in the fruit smoothie, could be fortifying.

And while North Americans might blanch at the thought of sipping frog entrails, Europeans, like the French, might not. Frog legs, after all, are a beloved delicacy in France.

The custom is under new scrutiny in Peru, however. According to an AP report, some of the frogs consumed in Peru are a species from Lake Titicaca that is listed as critically endangered by the International Union for Conservation of Nature. Rodriguez Peña says her frogs come from the rainforest.

Mollie Bloudoff-Indelicato is a freelancer who reports on science, health and the environment in Latin America. Follow her on Twitter @mbloudoff.