Accessibility links
Behind Bars, Cheap Ramen Is As Good As Gold : The Salt Instant noodles are a staple for inmates: a basis of recipe hacks, a form of currency. They've even helped defuse a prison riot, as an ex-inmate details in Prison Ramen, a book of stories and recipes. 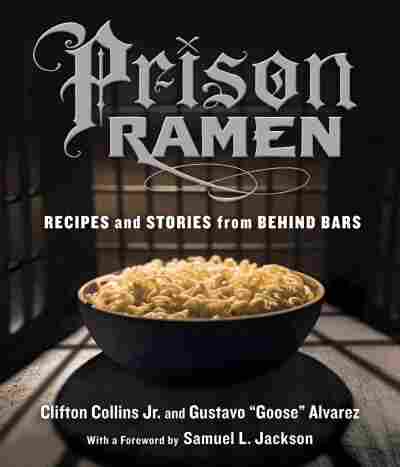 Recipes and Stories from Behind Bars

Instant ramen noodles are often looked upon with scorn as cheap food for starving college kids.

But as a new book points out, those noodles are like gold for people in prison.

Gustavo "Goose" Alvarez spent more than a decade locked up on a weapons charge, among others. And during that time, he grew to love ramen noodles. Along with a childhood friend, Clifton Collins Jr., he put together a new book of recipes called Prison Ramen: Recipes And Stories From Behind Bars.

"That's everybody's staple in prison: No matter who you are, you're cooking with ramen," Alvarez tells Peter O'Dowd of Here & Now.

Alvarez says he was inspired to write the book of prison recipes by a race riot that happened in 2009, while he was an inmate at the California Institute for Men in Chino. It was a fight between black and Hispanic prisoners, he says, and some buildings had caught fire as a result.

In the chaos, Alvarez recalls, dozens of African-American prisoners who'd evacuated their own burning building approached the building he was in, seemingly intent on attacking him and other Hispanic prisoners inside.

Then, "out of nowhere, an older gang member walked up to 100 inmates and talked them out of it," Alvarez says. How? By sharing his food.

"They were stuck there for hours, freezing in the cold," Alvarez says of his would-be attackers. "This older guy saw that and started feeding them." Soon, he writes in his book, he and other Hispanic prisoners gathered up all the ramen and other commissary items they had on hand to create a huge feast.

"And we became close ... through this meal. It was kind of like a bridge," says Alvarez.

Cooking in prison requires a lot of hacks, of course. Don't have pots? Bags from pork skins or rinds are useful, "because the boiling water never melted the bag," he writes. "Large buckets lined with plastic trash bags would be used to cook huge spreads." Mixing strawberry jelly with soy sauce makes a credible imitation of teriyaki sauce.

And the starting point of much of this creative cooking, he writes, was ramen — from "dirty ramen" (made with Vienna sausages, green beans and carrots, among other things) to ramen pot roast.

Alvarez spoke to O'Dowd from his home in Mexico. Highlights from their conversation follow, edited for length and clarity.

On the role of ramen noodles in prison culture

You can use it to barter — it's worth a dollar. You buy them at the commissary for a dollar apiece — I'm sure the prices have changed now. Some people don't like them, some people will never eat them, but they use them — that's their funny money. Also, it can bring a couple of guys who don't have much together. Why? Because maybe a guy has a bag of chips — that's all he has to his name. And this other guy is blessed to have a couple of soups. Well, they get together, they make an interesting meal.

On improvising ramen recipes behind bars

In most cases, if you're lucky enough to know somebody that works in the kitchen, they can bring you back some raw onions, maybe some chives, some jalapenos, fresh vegetables. And then there's times when you don't have much but tap water, a bag of Cheetos — Flamin' Hot Cheetos at that — and a couple of soups. And you know what? You make a little tamale.

In most cases, we make makeshift stingers. ... You'll get some two-way wires and you connect them to some razor blades out of a brand-new razor. And then the other end is the male plug to go into the female plug. You put the metal piece in the water first, and then you connect it to the outlet. And within 30 seconds, that water is steaming hot.

I know some college kids might attempt to cook some of these. And quite frankly, I've had a few of them direct message me and say that they were awesome. They'll go, 'Man, these are great. I saved some money. It only cost me a couple dollars.' Cool.

And then I'd like others to read it and be humbled by the stories. And maybe, you know, they'll have a friend of a friend or a family member — somebody that's made a mistake and is doing some time. And they can probably share the stories with them, and hope it can teach them something. Maybe learn from my mistakes and others not to make these stupid decisions.

This interview aired on Here & Now, a public radio show from NPR and WBUR in Boston. You can find recipes from Prison Ramen on Here & Now's website.