Accessibility links
How Suffragists Used Cookbooks As A Recipe For Subversion : The Salt Women seeking the right to vote published the cookbooks both to raise funds for their cause — and as a strategic rebuttal to those who painted them as neglectful mothers and kitchen-hating harridans.

How Suffragists Used Cookbooks As A Recipe For Subversion

How Suffragists Used Cookbooks As A Recipe For Subversion 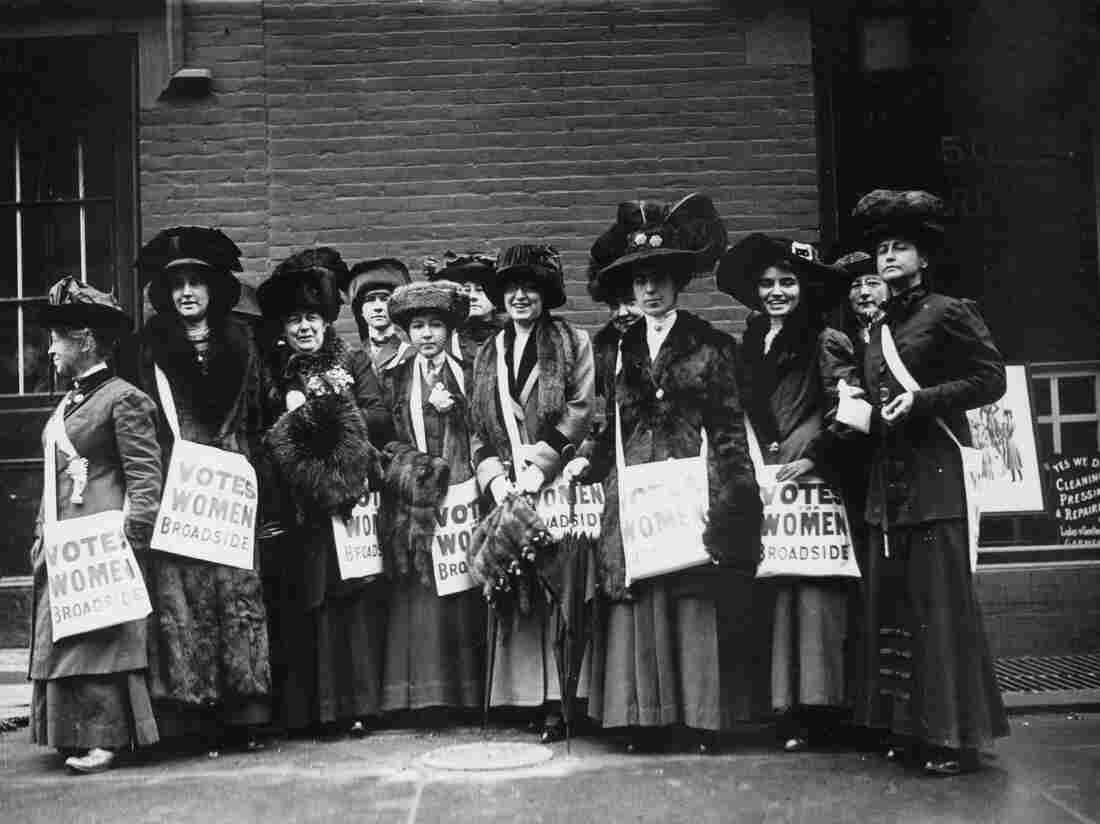 Members of the women's suffrage movement prepare to march on New York's Wall Street in 1913, armed with leaflets and slogans demanding the vote for women. Paul Thompson/Getty Images hide caption 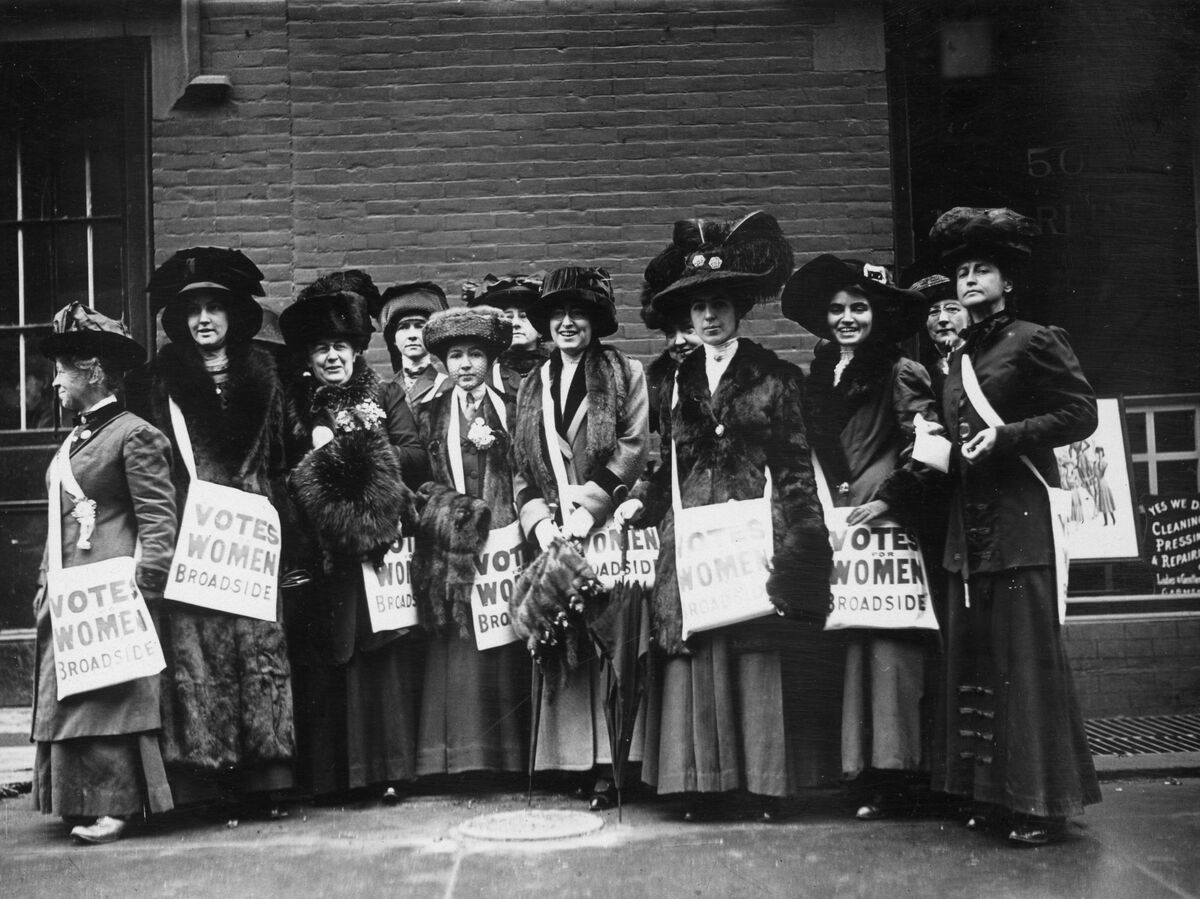 Members of the women's suffrage movement prepare to march on New York's Wall Street in 1913, armed with leaflets and slogans demanding the vote for women.

In the new Meryl Streep period movie Suffragette, Englishwomen march on the streets, smash shop windows and stage sit-ins to demand the vote. Less well-known is that across the pond, a less cinematic resistance was being staged via that most humble vehicle: the cookbook.

Between 1886, when the first American suffragist cookbook was published, and 1920, when the 19th Amendment to the U.S. Constitution granted women the right to vote, there were at least a half-dozen cookbooks published by suffragette associations in the country.

These books were the descendants of the post-Civil War charity cookbooks, published to raise funds for war victims and church-related issues.

The suffrage cookbooks came garnished with propaganda for the Great Cause: the fight for getting women the right to vote. Recipes ranged from basic guidelines on brewing tea and boiling rice, to epicurean ones for Almond Parfait and the ever-popular Lady Baltimore Cake, a layered Southern confection draped in boiled meringue frosting. Occasionally, there was a startling entry, such as that for Emergency Salad: one-tenth onion and nine-tenths apple with any salad dressing. But the bulk comprised a soothing flow of soups, gravies, breads, roasts, pies, omelets, salads, pickles and puddings. 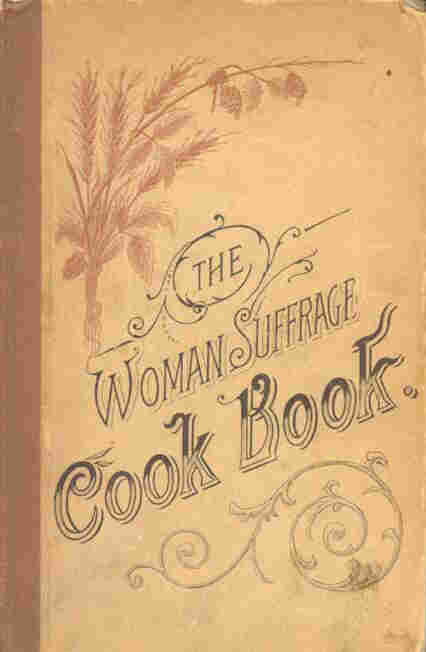 Cover of The Woman Suffrage Cook Book, published in 1886. Hattie Burr, the editor, noted proudly that "among the contributors are many who are eminent in their professions as teachers, lecturers, physicians, ministers, and authors — whose names are household words in the land." Special Collections/Michigan State University Libraries hide caption

Today, some might ask: What were feminists doing printing cookbooks? Wasn't their whole movement aimed at empowering women beyond home and hearth?

"Women used what they knew, what they could to champion their causes," eminent culinary archivist Jan Longone explained during a 2008 lecture at the University of Michigan, where she is adjunct curator of the Janice Bluestein Longone Culinary Archive. "If that meant baking a cake or cooking a dinner or writing a cookbook, they did that. I need not remind the audience that for most of the 19th century, a woman had no control over her own money, her own children, her own destiny."

But, as Longone points out, these cookbooks were also a strategic rebuttal to the snide jokes and hurtful innuendo directed against suffragists, who were painted as neglectful mothers and kitchen-hating harridans, busy politicking while their children starved. The assertion these books sought to buttress was that "good cooking and sure voting went hand in hand," to quote the 1909 Washington Women's Cook Book, which opened with the couplet:

On Dec. 13, 1886, America's first suffragist cookbook, The Woman's Suffrage Cook Book, was launched on a drizzly but sold-out evening at a fundraiser at the Boston music hall. The hall was decorated with a white banner bearing the Massachusetts Woman Suffrage Association motto, "Male and female created He them, and gave them dominion."

Members included the novelist Louisa May Alcott, who would become the first woman registered to vote in Concord. Though she hadn't contributed a recipe, Alcott had just published Jo's Boys, the final book of her Little Women series, into which she had slipped in a droll description of a statue of Minerva, the goddess of wisdom, sporting a "Women's Rights" slogan on her shield and a helmet ornamented with "a tiny pestle and mortar" — a divine nod to the compatibility between cooking and voting.

Recipes were contributed by regular housewives who carried a "Mrs." before their name, as well as a parade of prominent suffragists who didn't.

Irish Stew, for instance, came courtesy of Cora Scott Pond, a militant prohibitionist (she declined fermented communion wine) and real-estate investor who had refused to wear a corset starting at the age of 16.

Chicago obstetrician and gynecologist Alice Bunker Stockham, the fifth woman to become a licensed doctor in the U.S., sent in an elaborate recipe for Coraline Cake, which called for the cake to be split and infused with strawberry or raspberry juice, then filled with boiled custard to make a sort of "French pie."

Dr. Stockham was anti-alcohol and anti-corset but — extraordinarily for her time – pro-masturbation. She publicly endorsed it as healthy for both men and women. Her unorthodox stand positioned her as the antithesis to Sylvester Graham, the Presbyterian reformer who believed rich food inflamed sexual appetite, and who invented the Graham cracker (made with unrefined flour) to help Americans tame their sexual desires. By the Rev. Graham's standards, the Coraline Cake was positively orgiastic. 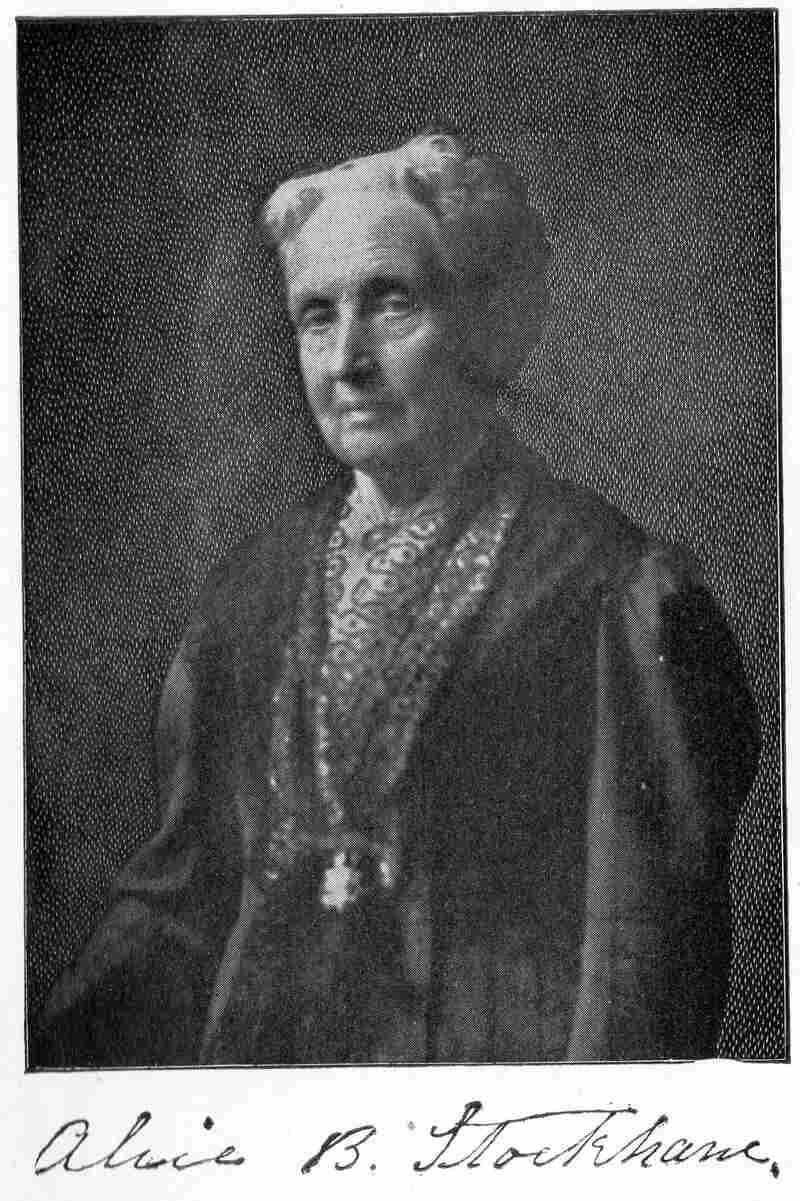 Among those contributing to the first suffragist cookbook, published in 1886, was Alice Bunker Stockham, a Chicago obstetrician and gynecologist who sent in an elaborate recipe for Coraline Cake. Stockham was anti-alcohol and anti-corset but — extraordinarily for her time — pro-masturbation. Wikimedia Commons hide caption

Julia A. Kellogg, star student of novelist Henry James' father, contributed a veal sausage recipe. Though Henry James Sr. was in favor of universal suffrage, he forecast that "women wouldn't avail themselves of it when it was granted." When Kellogg disagreed, they quarreled, according to Alfred Habegger's Henry James and the 'Woman Business.'

Anna Ella Carroll, a political writer from Maryland who freed her slaves when Abraham Lincoln was elected president, and who advised him during the Civil War, sent in gruesomely explicit advice for Terrapin Soup. (Turtle soup was once an American delicacy.)

"Decidedly, the terrapin has to be killed before cooking, and the killing is no easy matter," she wrote. "The head must be cut off, and, as the sight is peculiarly acute, the cook must exercise great ingenuity in concealing the weapon." The decapitated terrapin was then to be "boiled until the feet can be easily pulled off."

Sold at fairs, bazaars and women's exchanges, these cookbooks not only raised funds for the suffrage movement, says Longone, but also helped women network, and gain new skills in the fields of publishing, advertising and sales.

In 1891, the Equal Suffrage Association of Rockford, Ill., published The Holiday Gift Cook Book. At the time, the state's constitutional law stated: "Idiots, lunatics, paupers, felons and women shall not be entitled to vote." 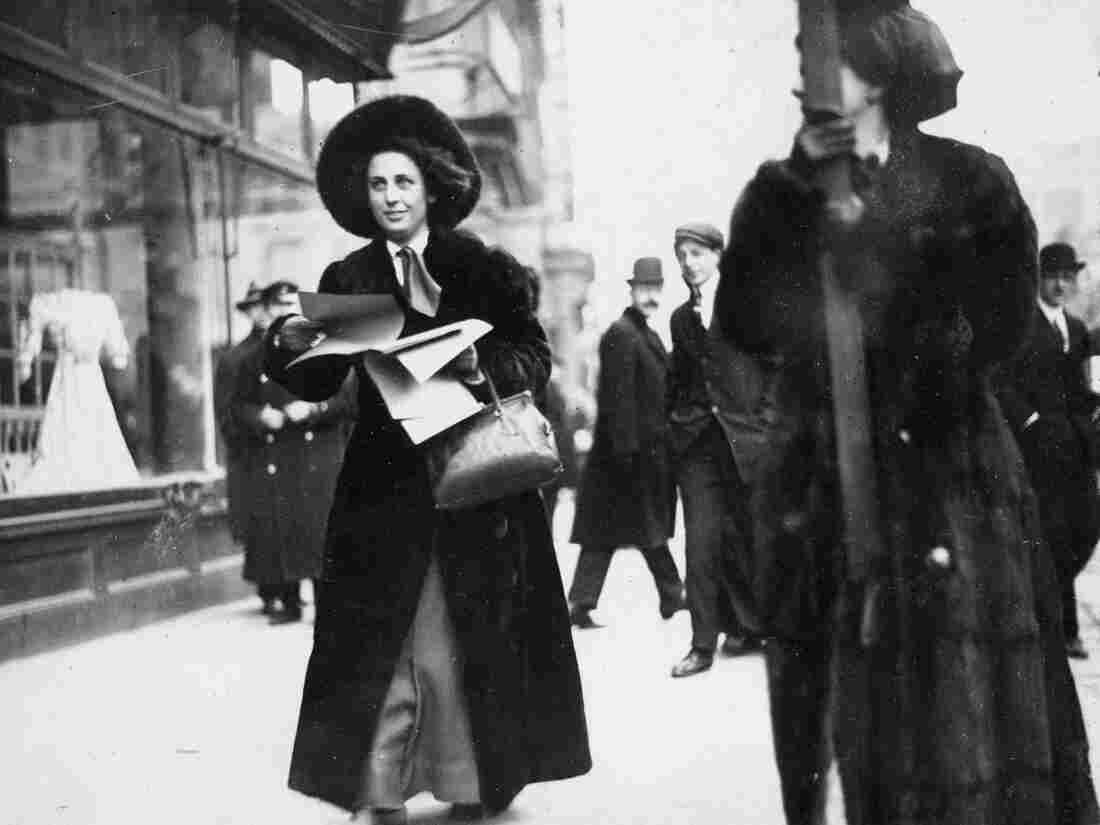 Martha Gruening, a suffragist leader, distributes literature on the movement to passersby in New York City, circa 1912. She later earned a law degree from New York University and was active in the civil rights movement. Paul Thompson/Getty Images hide caption 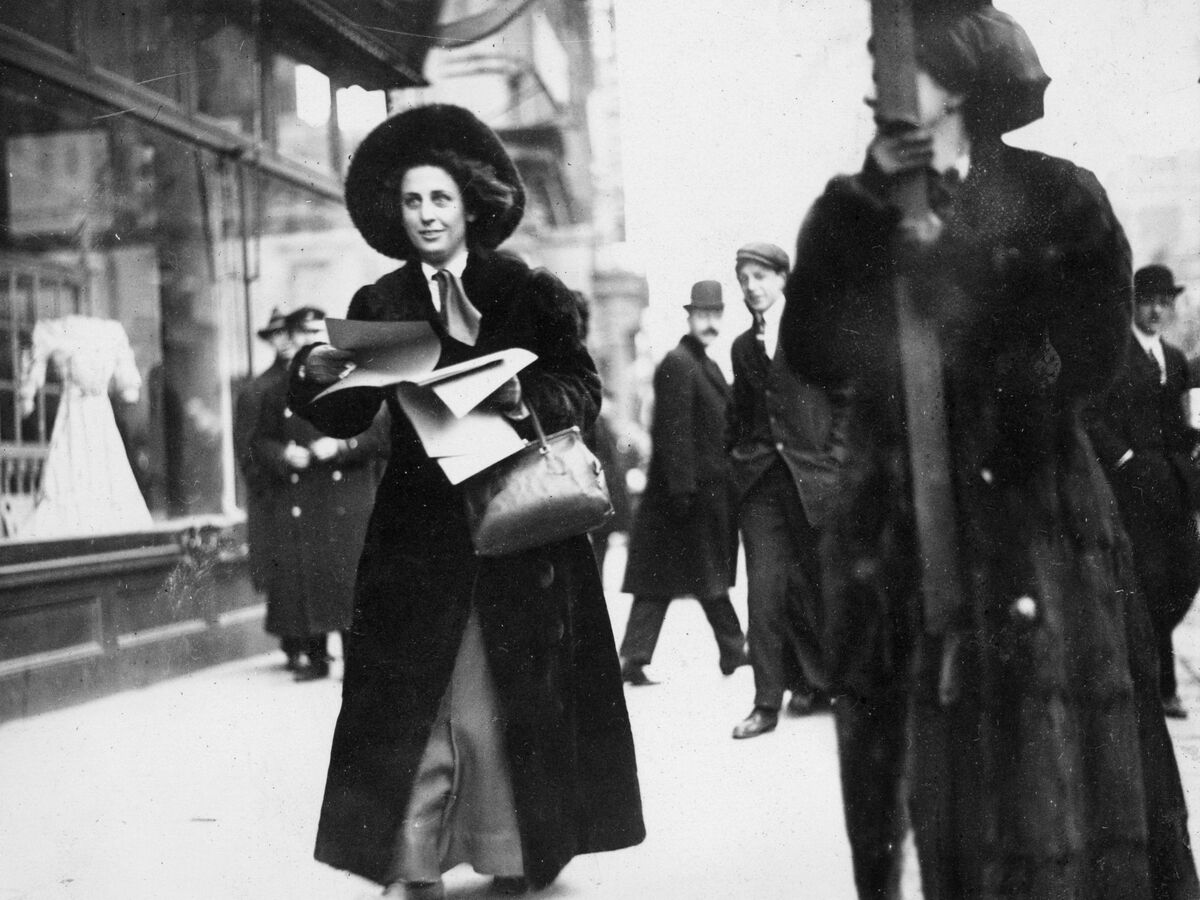 Martha Gruening, a suffragist leader, distributes literature on the movement to passersby in New York City, circa 1912. She later earned a law degree from New York University and was active in the civil rights movement.

Recipes were interspersed with pro-suffrage quotes by famous people such as British politician William Gladstone and abolitionist author Harriet Beecher Stowe. "Of these, the most poignant plea is that of Clara Barton, founder of the American Red Cross," says Longone.

Barton, a legendary Civil War nurse known as the "Angel of the Battlefield," wrote, "When you were sick and wounded I toiled for you on the battlefield. Because of my work for you, I ask your aid. I ask the ballot for myself and my sex. As I stood by you, I pray you stand by me and mine."

Perhaps the most fascinating of these cookbooks came from Pittsburgh in 1915. The Suffrage Cook Book was a sumptuous cake layered with recipes, celebrity endorsements, photographs and saucy jokes. 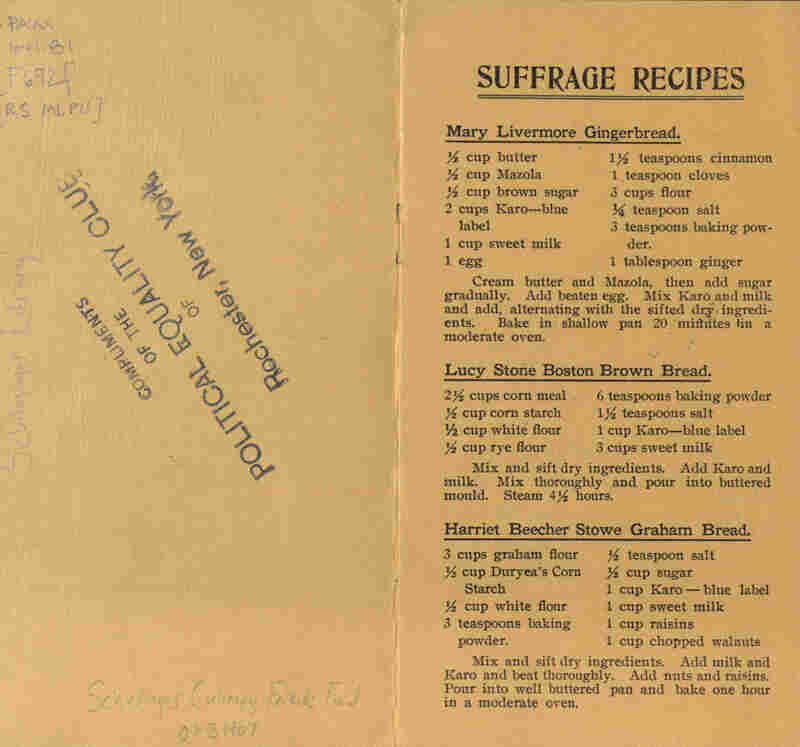 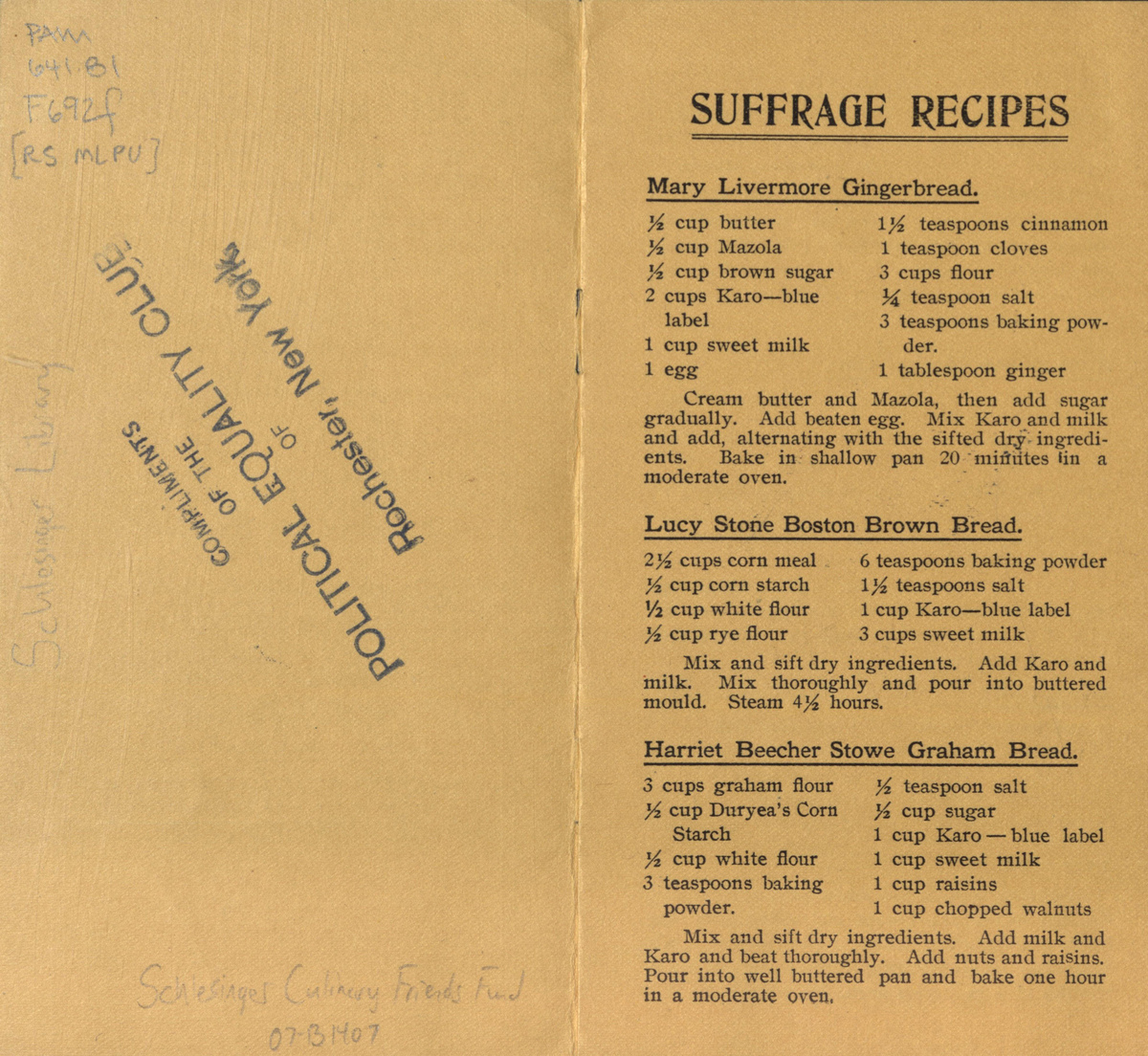 Recipes from the Woman Suffrage Cook Book, including one for "Graham Bread" attributed to Harriet Beecher Stowe, the author of Uncle Tom's Cabin. Beecher Stowe's sister Isabella Beecher Hooker was a founder of the National Woman Suffrage Association.

The blue cover featured a silhouette of Uncle Sam piloting the ship of state with a wheel that has only 12.5 spokes. "The 12 spokes were for those states where women could vote before the 19th Amendment — all Western states," explained Longone. "The half-spoke was for Illinois, which, at the time, allowed women to vote only in school board elections."

Its pages were sprinkled with recipes carrying playful titles like "Hymen Cake," "Mother's Election Cake," "Suffrage Salad Dressing," "Suffrage Angel Cake" and "Parliament Gingerbread (With apologies to the English Suffragists)." There were satirical recipes, too, such as "Pie for a Suffragist's Doubting Husband," whose ingredients made for a doleful litany:

Mix the crust with tact and velvet gloves, using no sarcasm, especially with the upper crust. Upper crusts must be handled with extreme care, for they quickly sour if manipulated roughly.

Another recipe, for "Anti's Favorite Hash" — "anti" being shorthand for those against the Great Cause — called for a generous handful of injustice, a pound of truth thoroughly mangled, a little vitriol for tang, and a string of nonsense to be stirred with a sharp knife.

The contributors were all women, apart from a few celebrity male feminists like writer Jack London, who sent in two recipes: roast duck ("the plucked bird should be stuffed with a tight handful of plain raw celery"), and a version of stuffed celery, which called for Roquefort cheese, softened with butter and sherry, to be "squeezed into the troughs" of the celery sticks.

Exhibiting political savvy, The Suffrage Cook Book's editor, Mrs. L.O. Kleber, had invited endorsements from governors of eight states that had passed female suffrage laws (Wyoming, Arizona, California, Kansas, Idaho, Illinois, Washington and Oregon). These eminences were fulsome in their praise of women as intelligent, diligent and patriotic voters — but only up to a point.

As Idaho Gov. Moses Alexander wrote: "The impression that Woman Suffrage inspires an ambition in women to seek and hold public office is altogether wrong. The contrary is true."

Hillary Clinton, Nancy Pelosi, Jan Brewer, Nikki Haley and a host of other women would surely chuckle at that.