Accessibility links
Salad-Making Is Performance Art At The Getty In Los Angeles : The Salt Brooklyn photographer and writer Julia Sherman first established salad as a serious medium with her Salad for President blog. Now she's making salad with artists from around the country at the Getty. 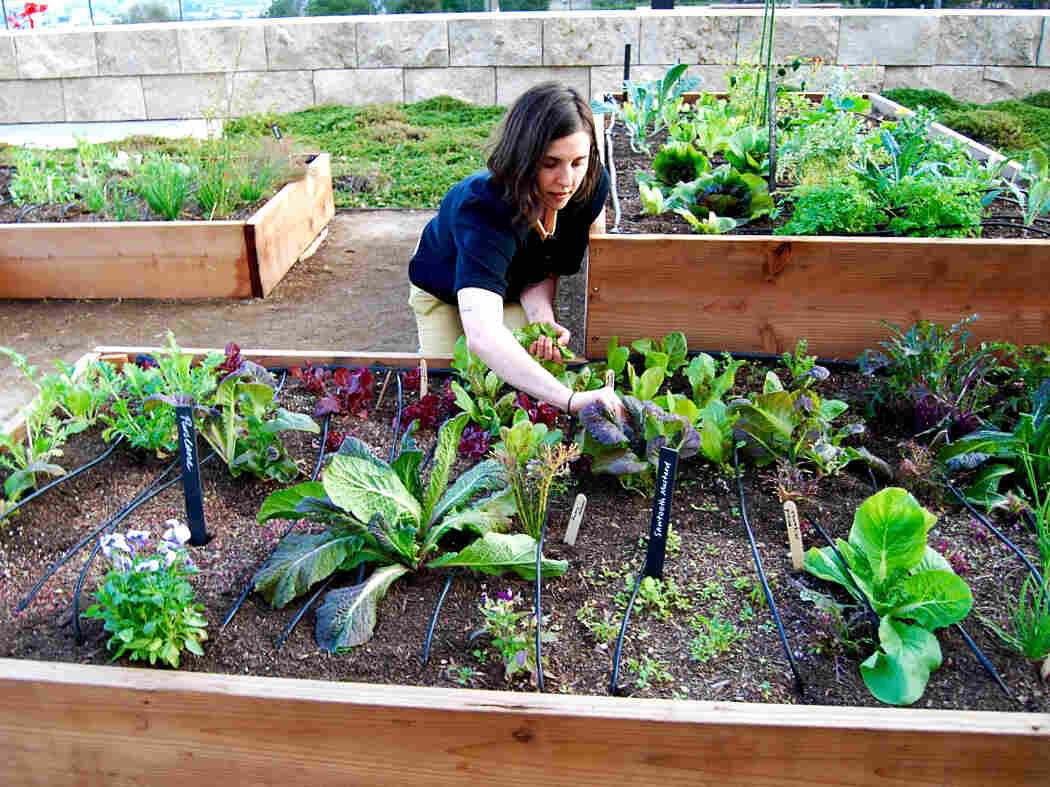 Julia Sherman is the mastermind behind the Salad Garden at the Getty. Here, she pulls up heirloom greens for the salad. Abbie Fentress Swanson for NPR hide caption 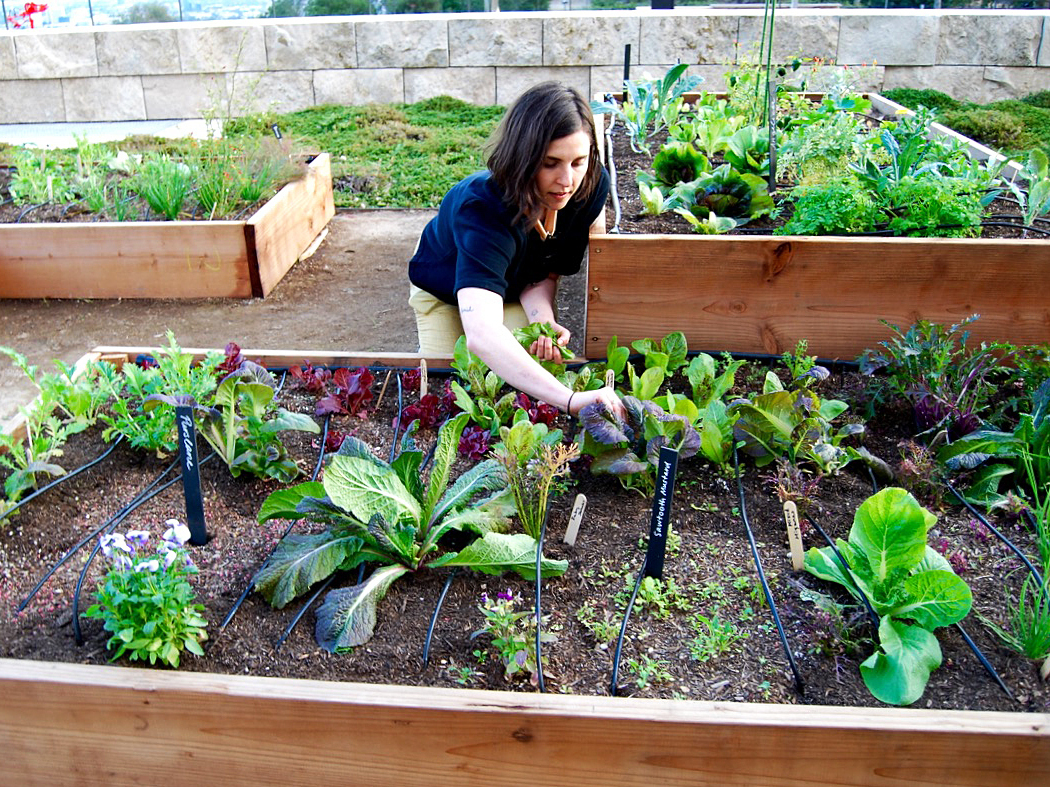 Julia Sherman is the mastermind behind the Salad Garden at the Getty. Here, she pulls up heirloom greens for the salad.

If the Getty Center in Los Angeles is going to treat salad as art, then you can bet iceberg lettuce is not part of the equation. And indeed, from now through January 11, the Salad Garden performance art stage features artists making salads from more than 50 exquisite heirloom herbs, vegetables and edible flowers. Part of the spectacle is also the artists devouring their salads on site.

Brooklyn photographer and writer Julia Sherman first established salad as a serious medium with her Salad for President blog. She then put in an acclaimed garden installation on the roof of MoMA's PS1 in New York last year.

As she's moved the garden west to the Getty, she's tapped a dozen contemporary artists from across the country, including Larry Bell, Harry Gesner and Richard Irwin, to make salads with her here.

Sherman says the salad garden is an opportunity for artists to learn about rare heirloom plant varieties and engage with these plants as their materials in a new way.

"Every salad is a new take, especially when the prompt is to make something based off of what we're growing here," Sherman says. "We have some familiar plants, but a lot of these plants people have never had before. Even if artists come with a plan which we develop ahead of time, there's a certain element of chance and improvisation that necessarily happens on site." 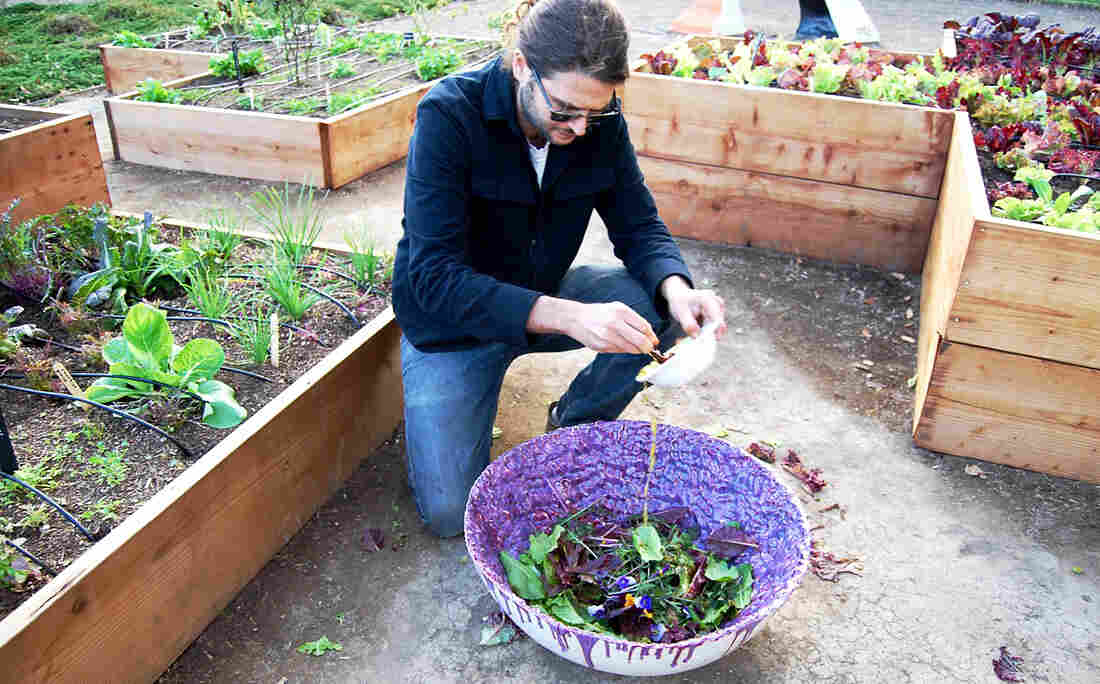 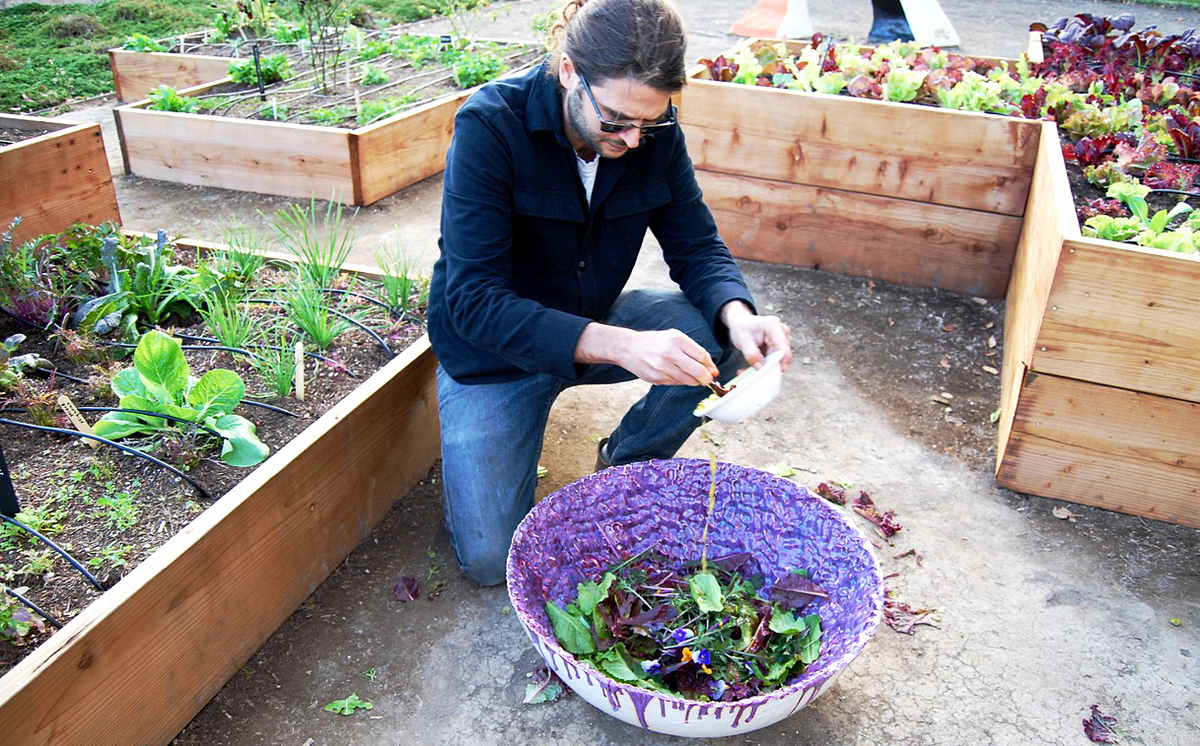 A fluid and flexible community space is what the Getty is after, too, says Sarah Cooper, who works in educational programs division and convinced Sherman to bring the salad garden to California.

Sherman's first Los Angeles guest artist is Michael Parker, who happens to share an interest in performance art about produce. In his "Juicework" exhibition earlier this year, Parker invited the public to squeeze juice from oranges, lemons and grapefruit using pretty handmade porcelain juicers that he made in his studio.

As he assembles his salad here at the Getty, Parker decides to taste each ingredient in the garden. The survey takes a couple of hours and yields selections like fragrant chicory and microgreen popcorn shoots for their color and pungent yet tender taste.

The leaves of the delicate purple-and-white pansies, however, do not make the cut. "Some of these plants leave a horrible aftertaste," Parker says.

Sherman agrees: "That leaf tastes like chewing gum or a crappy Life Savers from a hospitality bowl at a bad restaurant!"

At the garden's edge, we museum visitors watch Parker bend to try borage, an ancient herb with emerald leaves and purple star-shaped flowers. Borage was used to aid digestion and garnish the British Pimm's Cup cocktail.

"The young borage is delicious!" Parker says. "It tastes like cucumber. It's also kind of like okra because it's slimy."

Parker and Sherman next harvest mizuna and flashy butter gem and red ruffles lettuces. They add herbs and microgreens: chicory, basil and garlic chives. Pansy and marigold blossoms along with purple salvia give the salad more color. An errant ladybug is plucked out before the salad is finally dressed with the freshly squeezed juice of a Meyer lemon, olive oil, salt and pepper. Then it's all tossed in a giant purple iridescent porcelain bowl made by Parker.

Taking in the view of Los Angeles from atop the hill, the artists eat bites of salad with their hands and talk about how fresh it tastes, before moving onto discuss food waste and biodiversity in farming, and making absinthe from wormwood. The pretty salad looks like a Dutch still life from the 1600s and not a bit of it is wasted.

Visitors can see the Salad Garden first-hand two afternoons a week at the Getty and watch salad-making in the sculpture garden. And if it gets you hungry, you'll just have to make salad art at home.