Accessibility links
Tech Gurus Teach Food Entrepreneurs The Recipe For Success : The Salt The city of San Antonio is pairing budding food businesses with mentors from its thriving tech industry. We follow one cake maker through the process — and watch her revamp her business. 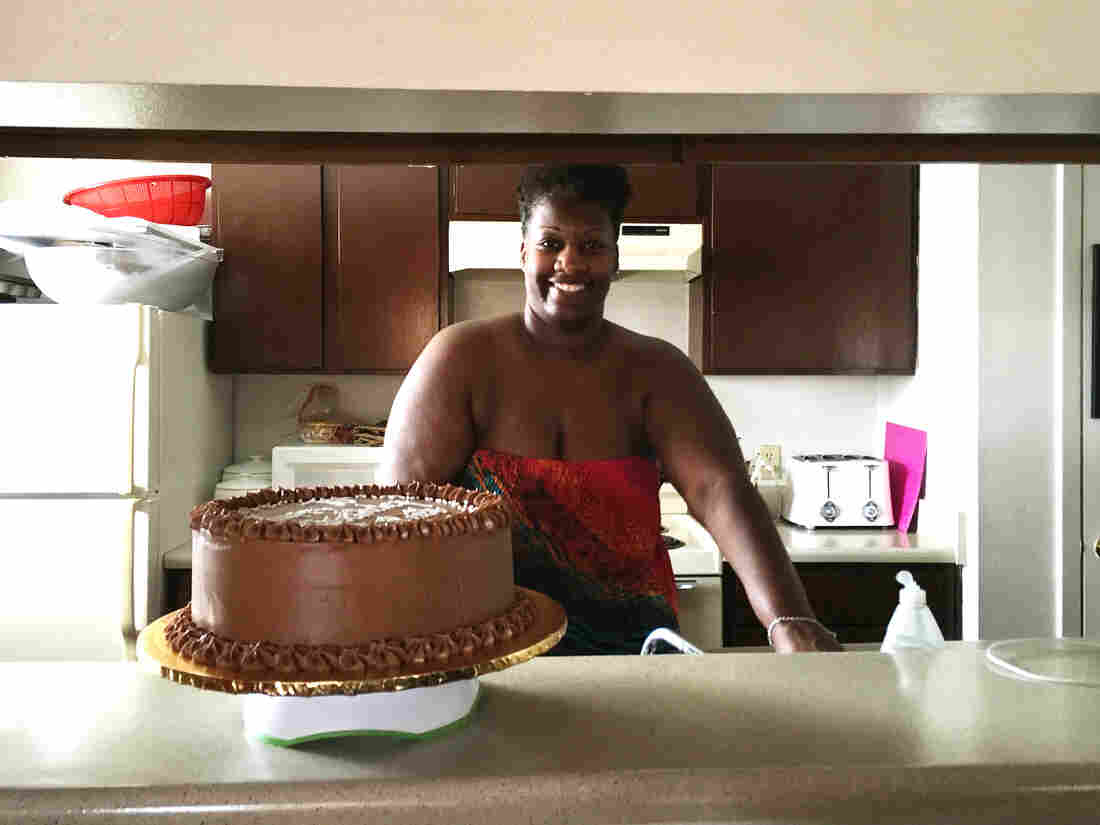 Last year, Munirah Small quit her job as a customer service representative to start a cake business. She had lots of repeat customers, but after accounting for her expenses, she found she didn't have much money left over — certainly not enough to pay herself a regular salary. So she applied to Break Fast and Launch to figure out what she could be doing better. Brenda Salinas for NPR hide caption 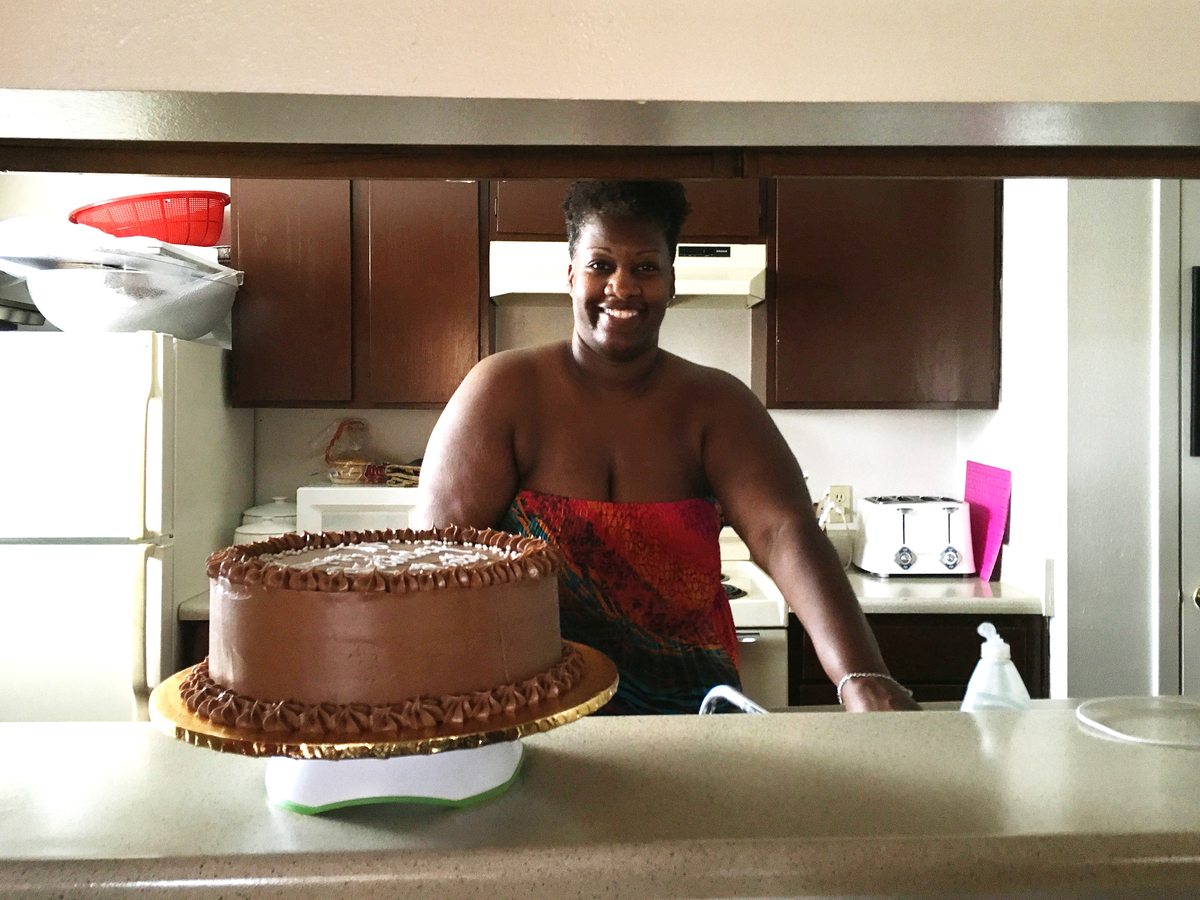 Last year, Munirah Small quit her job as a customer service representative to start a cake business. She had lots of repeat customers, but after accounting for her expenses, she found she didn't have much money left over — certainly not enough to pay herself a regular salary. So she applied to Break Fast and Launch to figure out what she could be doing better.

San Antonio is one of the country's emerging tech hubs. It's also home to a rich culinary scene. Now city officials are trying to bring both communities together through a program called Break Fast and Launch.

The program pairs emerging food entrepreneurs with technology mentors who teach them business. The tech mentors don't have culinary backgrounds, but they know how to get a startup off the ground. The idea behind Break Fast and Launch is to take some of that vibrant startup energy and inject it into San Antonio's food scene. It's one of several "culinary incubator" models springing up across the country.

Break Fast and Launch was started last year with city and federal funding. Thirty entrepreneurs went through the competitive program last spring. Munirah Small is part of the fall cohort that started in September. Last year, the 44-year-old mom quit her job as a customer service representative at AT&T to start a cake company called Sweet Themes.

"The best way to describe my cakes would be a delicious edible centerpiece," Small says.

She says she found a lot of business through church and community groups. Baking is now her full-time job, and she has plenty of repeat customers. But after accounting for her expenses, there's not much money left over — certainly not enough to pay herself a regular salary, she tells me. So Small applied to Break Fast and Launch to figure out what she could be doing better.

The eight-person cohort meets once a week in a designated part of a public library to talk business strategy with different mentors. When I first met up with the group in October, they were talking to Mike Girdley, the founder of a popular programming boot camp called Codeup.

Girdley has no experience in the food industry. In fact, he's never tasted anything whipped up by the entrepreneurs before him. Today they're talking about a common business mistake: pricing your product too low.

"You're going to price it way too low, Girdley tells them, "because you're seeing it from the price of a technician. You're not necessarily seeing it from the perspective of a customer, right?" The question these entrepreneurs need to ask themselves, he says, is "what value are you giving to the customer?"

Small sells her cakes for between $35 and $175 each, depending on the size, ingredients and design. That puts her in the same price range as a grocery store bakery — not her gourmet competitors. Girdley says if Small accounts for the value of her time, she's actually losing money on every cake. He tells her, you need to be charging three times as much.

Girdley says another lesson food entrepreneurs can pick up from the tech world is how to market their products with a story — the way Apple has long marketed its products to the creative class.

"People don't necessarily buy what your product is. They're buying into your story — the vision of how you're making the world a better place, or how you're changing people's lives," Girdley says.

Small might be a baker, but Girdley says she's not actually selling cakes: She's selling a complete experience. "They're not buying cakes from you, they're buying interactions with you," Girdley says.

After two hours at Break Fast and Launch, Small walks out with optimism and Kanye levels of confidence. She proclaims, "I'm the best cake service in the city!"

Three weeks later, I visit Small in her small apartment kitchen to see whether she has implemented the changes her mentor advised her to make.

As Small mixes the buttercream frosting, a cloud of sugar rises from her stand mixer, making her entire apartment smell sweet. Her little oven has been working around the clock. And there are so many cakes cooling in the fridge that she doesn't have any room for her own food. It's a sign that business has really picked up.

A lot has changed since we last met. Small has almost tripled her prices, and she's started marketing herself as a designer of custom, gourmet cakes. She's been targeting the market for weddings and quinceañeras -- a coming-of-age tradition, popular among many Latinos, to celebrate when a girl turns 15. These affairs can be as lavish as weddings, and Small has been going to expos, convincing women that her gourmet creations will impress their guests.

She's also using social media to promote herself and hosting cake tastings for potential clients. Earlier this month, she was the subject of a feature story in her local newspaper.

Small says something surprising happened when she raised her prices. "People were more apt to be interested than before, when I was undercharging myself," Smalls says. "It's kind of crazy how that works!"

At first, Small was worried about how her repeat clients would react to her price hikes. She explained to them that now that she's an established business, she needs to charge more. It turned out, most of her repeat clients were OK with the new prices, she says. Overall, the demographics of her clientele are shifting: She's now making larger cakes for weddings, quinceañeras and big corporate parties.

Of course, not every customer was on board with the higher prices. "I have some that have dropped off, they're like 'you're too expensive,' " says Small. "And that's OK, because when I'm at the mall, I can't shop at every store — not right now, sure can't. And it's no harm, no foul."

Small is baking nine cakes in the next 48 hours. The smallest — a two-layer chocolate cake that feeds eight people and takes her two hours to make — used to go for $35. Now she's selling it for $85.

"I've stopped taking that relaxed approach to it," Small says of her business strategy. And she says she's glad she reached out to the tech community for help.

And, yes, she's now paying herself — and making a 35 percent profit, she says.

She's still getting mentoring from Break Fast and Launch — only now, the focus is on what to do with her newfound profits. Her next goals: to get out of her tiny kitchen and into a commercial kitchen space, and to hire five people to work for her company full time.