Accessibility links
Premium, Young And Natural: The Turkey Labels We Cluck-Cluck Over : The Salt Turkeys these days are often plastered with an array of terms that can confuse and even mislead consumers. Here's a glossary of jargon for the wannabe informed Thanksgiving turkey buyer.

Premium, Young And Natural: The Turkey Labels We Cluck-Cluck Over

Premium, Young And Natural: The Turkey Labels We Cluck-Cluck Over 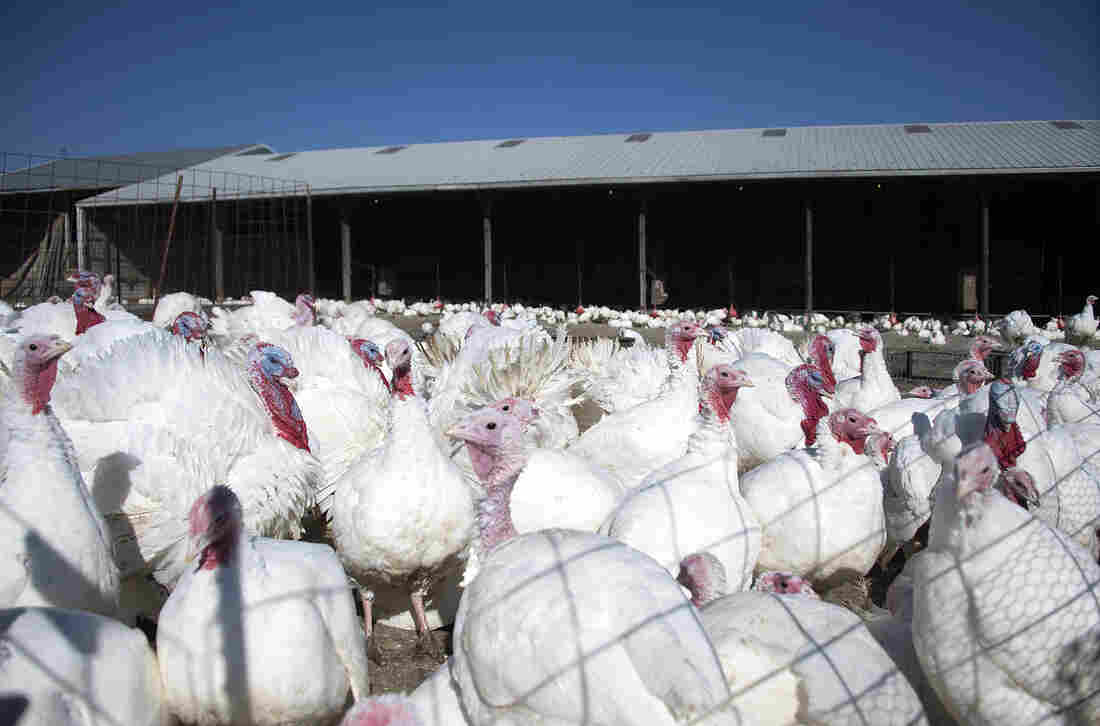 "Free-range" turkeys at Maple Lawn Farms in Fulton, Md., in November 2014. In some cases, turkeys labeled "free-range" roam freely on a farm. But in the vast majority spend most of their time in crowded houses, consumer advocates say. Jim Watson/AFP/Getty Images hide caption 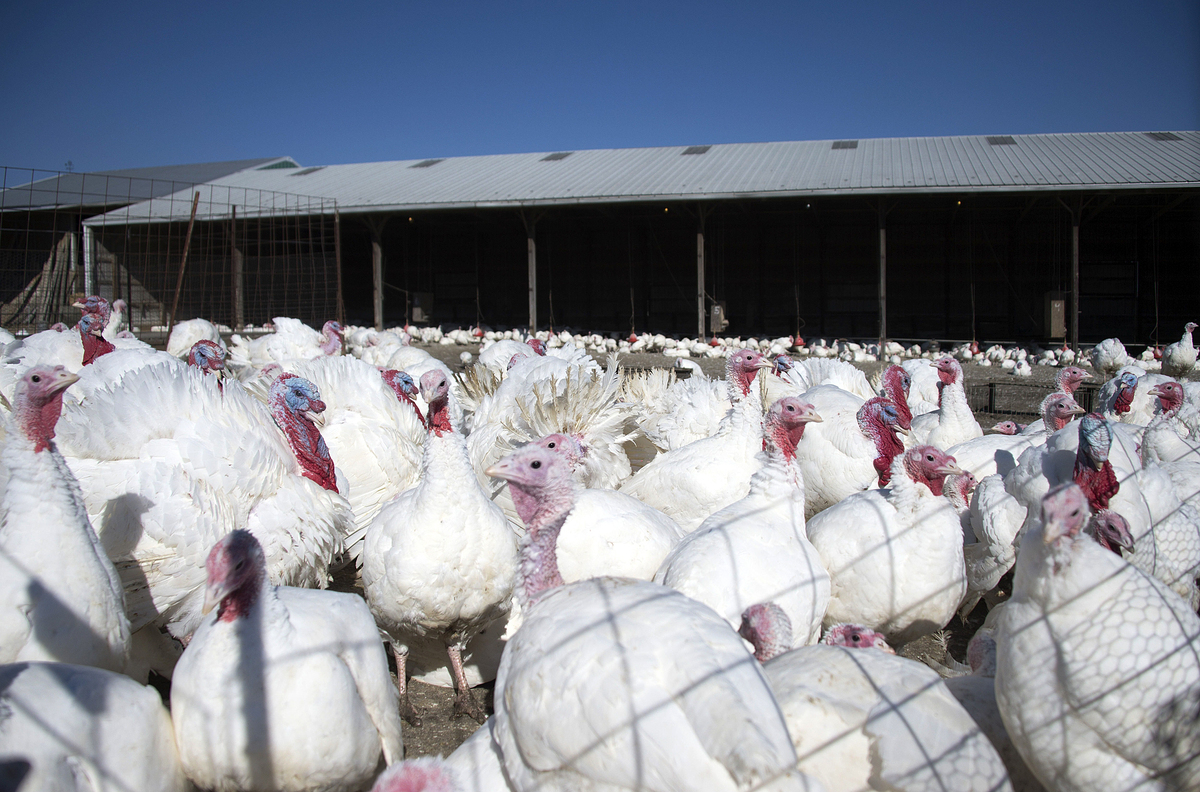 "Free-range" turkeys at Maple Lawn Farms in Fulton, Md., in November 2014. In some cases, turkeys labeled "free-range" roam freely on a farm. But in the vast majority spend most of their time in crowded houses, consumer advocates say.

You're at the grocery store, shopping for Thanksgiving dinner. You've grabbed sweet potatoes, Brussels sprouts and cans of pumpkin. If you're from the Midwest like I am, you're also gearing up for green bean casserole.

But when you approach a refrigerated section of the store piled high with turkeys, you're suddenly inundated with labels: natural, fresh, no hormones, young, premium and so on. Pretty soon, your head is spinning, so you grab the nearest one. As you head to the checkout line, you wonder if you've just made an ethical choice or been duped.

This scenario has become part of the Thanksgiving experience for many shoppers. If you're like me, you may have told yourself that, someday, you'll learn what all those labels actually mean. Well, today is that day. Because this is your guide to the utterly confusing world of turkey labels — a glossary for the wannabe informed Thanksgiving shopper.

What you might think it means: The turkey was slaughtered this morning (or maybe yesterday) and was rushed to my local grocery store, where consumers like me will taste the difference! 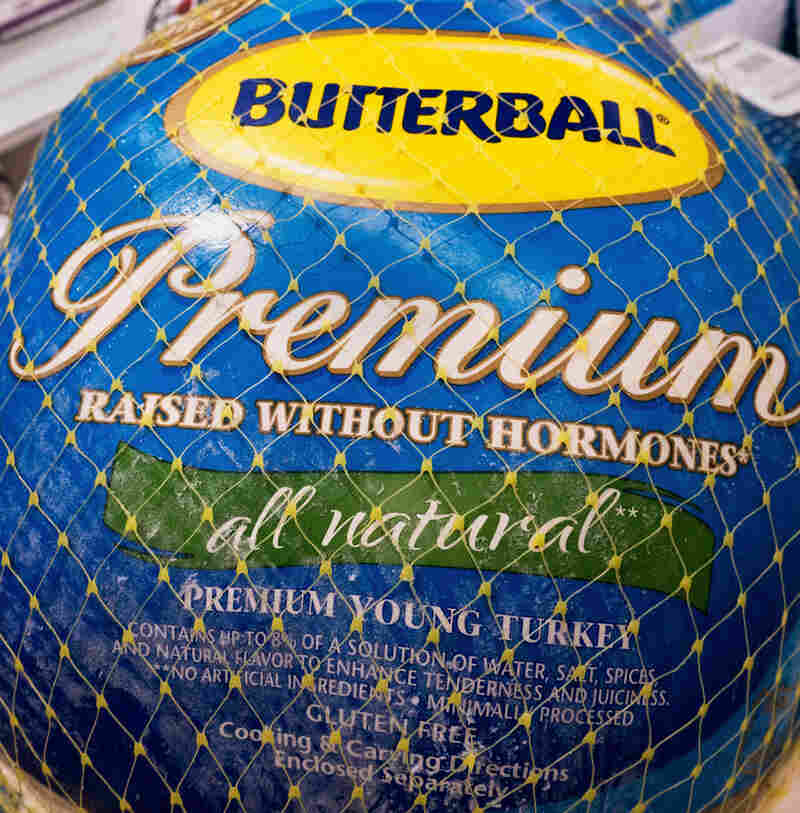 A Butterball turkey for sale in November 2014, in Centreville, Va. Terms like "premium" and "raised without hormones" tell you little about the quality of the turkey or how it was raised. Paul J. Richards/AFP/Getty Images hide caption 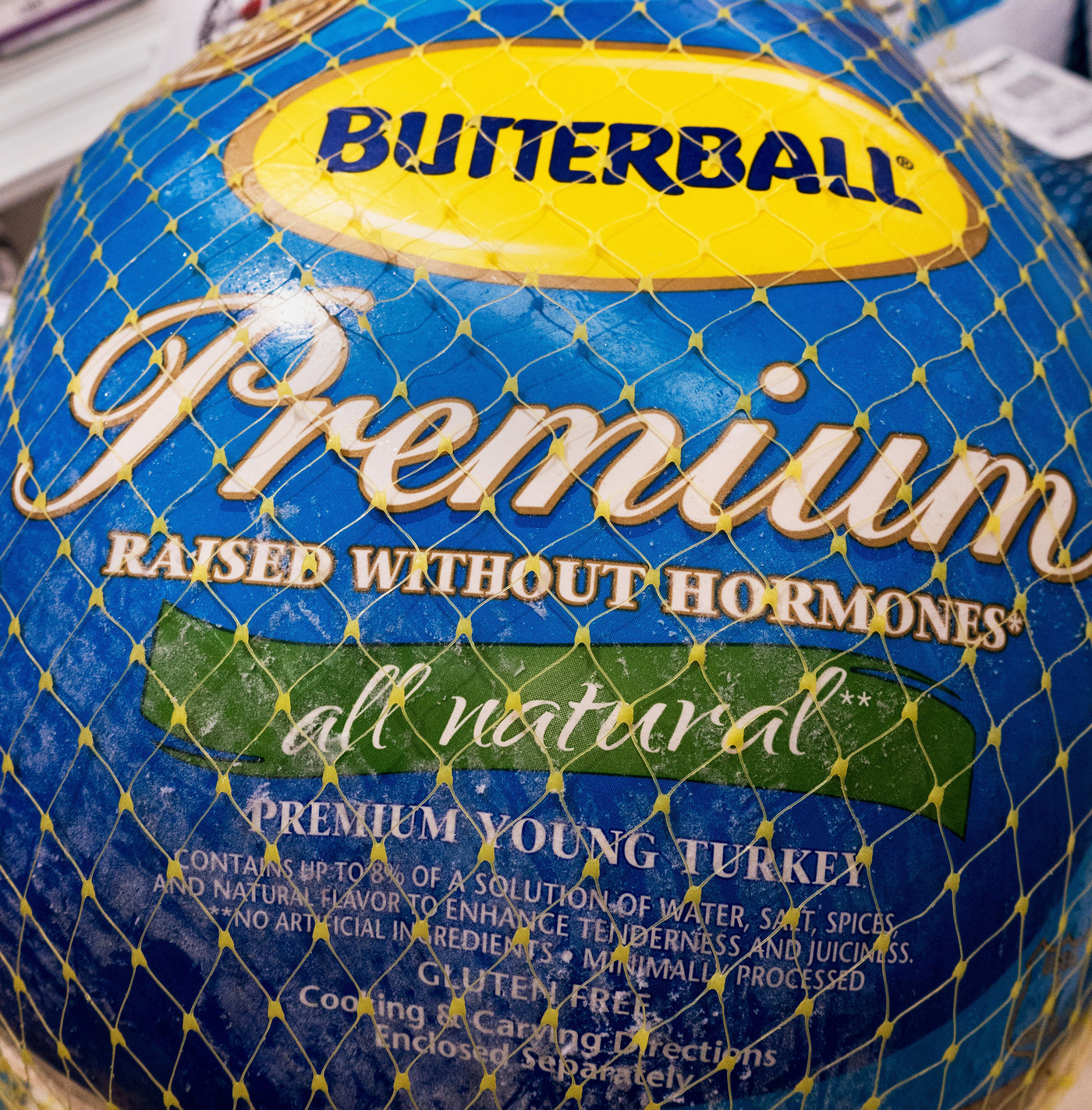 A Butterball turkey for sale in November 2014, in Centreville, Va. Terms like "premium" and "raised without hormones" tell you little about the quality of the turkey or how it was raised.

What it actually means: "Fresh" has nothing to do with the time between slaughter and sale. Instead, it means that the turkey has not been cooled to below 26 degrees Fahrenheit. In other words, it was never frozen. Above 26 degrees Fahrenheit, the meat can remain pliant — you can press it in with your thumb.

What you might think it means: This bird was killed at a younger age than most turkeys and is therefore more tender and delicious. Maybe it also suffered less.

What it actually means: The bird was likely killed at the same age as most other turkeys. According to Daisy Freund, an animal welfare certification expert at the American Society for the Prevention of Cruelty to Animals, most commercial turkeys are slaughtered at 16 to 18 weeks, compared to the roughly 10 years turkeys live in the wild. The U.S. Department of Agriculture does not define "young" for turkeys, but it requires that turkeys that lived more than a year be labeled as "yearling" or "mature."

What you might think it means: The turkeys have been raised in a "natural" environment, wandering around in the woods or on a farm, scavenging food and gobble-gobbling their cares away.

What it actually means: According to the U.S. Department of Agriculture, it means no artificial ingredients have been added to the turkey meat, and the meat is only minimally processed. But Urvashi Rangan, director of consumer safety and sustainability for Consumer Reports, says the term isn't helpful at all. "It has nothing to do with whether the turkeys got antibiotics every day, were living in filthy conditions or were confined indoors," she says. Her organization is campaigning against the use of the term, which they feel misleads consumers. The Food and Drug Administration also has admitted it's a challenge to define the term and just asked the public for help.

On that note, let's pause for a minute to answer a basic question — how exactly are most turkeys in the U.S. raised?

"The vast majority of turkeys are living in crowded houses — football field-sized sheds that are entirely enclosed — by the tens of thousands," says the ASPCA's Freund.   She says the 30-pound birds typically have their beaks cut to prevent them from injuring or killing one another, and are allotted an average of two square feet of space. "It's like living your entire life in Times Square on New Year's Eve," she says.

Meanwhile, Freund says, manure often piles up beneath the birds, and ammonia hangs thick in the air. Many turkeys are routinely given antibiotics to prevent them from getting sick. Plus, modern turkeys have been selectively bred to mature quickly and have extremely large breasts (for more white meat). Many have trouble standing and are incapable of having sex — their large chests get in the way, Freund says.

To be clear, turkey producers must still meet basic safety standards and the meat should be safe. But terms like "natural" may be misleading consumers about how the birds are actually raised.

What you might think it means: These turkeys roam freely on a farm, pecking at the lush grass and getting more exercise than I do.

What it actually means: In some cases (on some small farms), it does mean what you're picturing. But Rangan says in the vast majority of cases, "free-range" turkeys are raised in the standard, crowded houses. The only difference, she says, is that these birds must have "access to the outdoors."

But the word "access" is broadly used. "If the animal never even went outdoors, but you sort of opened and closed the door every day, that would suffice to label the bird as 'free-range,' " she says.

What you might think it means: This turkey had a better life than most, because at least it wasn't stuffed into a tiny cage.

What it actually means: This turkey's life was probably the same as most, because turkeys are not raised in cages. The conventional practice — which accounts for well over 95 percent of all commercial turkeys, according to ASPCA — is to raise them in open houses. So, calling a turkey cage-free is sort of like calling a cantaloupe cage-free.

What you might think it means: This turkey is a higher grade of meat, and is more delicious and healthy.

What it actually means: Basically, nothing. The USDA grades beef cuts with words like "prime," "choice" and "select," but premium is not one of their designations and these graded terms are not used for poultry anyway.   A company can label any kind of turkey as "premium."

What you might think it means: This bird is healthier than most because it wasn't pumped full of the hormones that turn some turkeys into the Incredible Hulk.

What it actually means: Once again, this term is misleading. By USDA law, turkeys (and other poultry) are not allowed to be given growth hormones.

What you might think it means: Finally, a bird that has been raised according to an ethical set of principles. It was probably treated fairly and lived a decent life. Maybe it even got to kiss its loved ones goodbye.

What it actually means: If there is no certifying agency, which there isn't for this term, the label is probably meaningless, says Rangan from Consumer Reports. That's because the USDA allows companies to come up with their own definition of "humane" and it gives its seal of approval if the company meets its own standards. In these cases, "it probably just means they met the conventional baseline," says Rangan.

That's most of the virtually meaningless terms. Let's move on to some labels that have at least some significance.

What you might think it means: The turkey was raised according to a stricter set of hygiene standards. It was probably kept cleaner and healthier.

What it actually means: The turkey was probably raised in the same crowded house conditions as most turkeys. The only difference is that it was slaughtered according to a set of kosher principles.

What you might think it means: This turkey enjoyed a lush supply of greens and grains, replicating its natural diet.

Did Your Thanksgiving Turkey Take Any Antibiotics?

What it actually means: The bird probably ate what most turkeys eat: corn. But these birds have not had their diets supplemented with animal byproducts, which does happen in some settings. The irony, though, is that turkeys are not natural vegetarians. In the wild, they eat a variety of bugs and worms, along with grass and other plants.

What you might think it means: These birds were never given any antibiotics of any kind.

What it actually means: These birds were given drugs only if they were sick, but not for growth promotion, feed efficiency or to prevent disease. That means their producers are contributing less to the risk of antibiotic resistance and to "superbugs"— a serious health concern. However, Rangan suggests that consumers look for the USDA label with this term, to verify that the companies have been inspected. And she points out that the label does not mean the birds were raised in more sanitary conditions — only that they were not given routine antibiotics.

What you might think it means: These turkeys were raised on a steady diet of organic vegetables, green smoothies and Bikram yoga.

What it actually means: To meet the requirements for the USDA's Certified Organic program, animals must have some access to the outdoors (though there's debate about whether or not most organic turkeys actually go outdoors), be fed only organic feed (non-GMO and grown without chemical pesticides) and must not be given antibiotic drugs on a routine basis. Rangan says organic conditions are "significantly different" from conventional conditions. And yet, she says, organic lags behind the conditions enjoyed by humanely raised birds.

Which brings us to the final section.

There are three main organizations that have publicly available standards for "humane" treatment. Birds bearing these labels typically are granted real access to the outdoors, eat a diverse diet and have the opportunity to behave as they would in the wild. You can read more about the specific criteria by clicking on each name.

Turkeys with this label come from farms that have been audited at least once a year, and have met criteria for animal welfare, environmental protection and community well-being. According to its website, "Provisions are made to ensure [the animals'] social interaction, comfort, and physical and psychological well-being."

This is also a label with clearly defined parameters for animal and environmental care. Its website says, "The goal of the program is to improve the lives of farm animals by driving consumer demand for kinder and more responsible farm animal practices."

This is a rating system with six different levels, ranging from less crowding (level one) to animals without clipped beaks spending their entire life on the same farm, with enhanced access to the outdoors  (level five-plus).

To summarize, here's a cheat sheet:

Enjoy this story? Check out our guide to egg labels.