Accessibility links
As Beekeepers Lose More Hives, Time For New Rules On Pesticides? : The Salt Beekeepers lost 42 percent of their hives last year. NPR and PBS NewsHour investigate what's behind the plight of the pollinators. Some scientists say pesticides called neonics are being overused.

America's beekeepers are having a rough time. They lost an estimated 42 percent of their hives last year.

While some colony losses are normal, these numbers are high. "Such high colony losses in the summer and year-round remain very troubling," entomologist Jeff Pettis said in a statement. He's a researcher at the USDA's Agricultural Research Service Bee Research Laboratory in Beltsville, Md., and a co-author of the government survey that tallied up the bee losses.

And these findings may be troubling for all of us who eat.

An estimated one in three mouthfuls of food we eat is dependent, to some extent, on the pollination services provided by bees and other pollinators. And honeybee pollination adds an estimated $15 billion to the value of crops each year.

What's to be done to reverse the plight of the bees?

One goal is to give bees more places to forage for nectar and pollen. Earlier this year, a presidential task force released a strategy that calls for restoring or enhancing 7 million acres of pollinator-friendly habit (think planting wildflowers along highways or other public spaces.)

But such efforts alone won't be enough to counter the headwinds that bees face. The task force points to multiple stressors — from climate change to the threat of the varroa mite to exposure to pesticides.

And it's that last stressor that's generated the most controversy: Several recent studies suggest that a class of pesticides called neonicotinoids, which are among the most widely used in the world, are harming bees.

The pesticides, which were introduced in the 1990s, are coated onto the seeds that farmers plant to grow their crops. 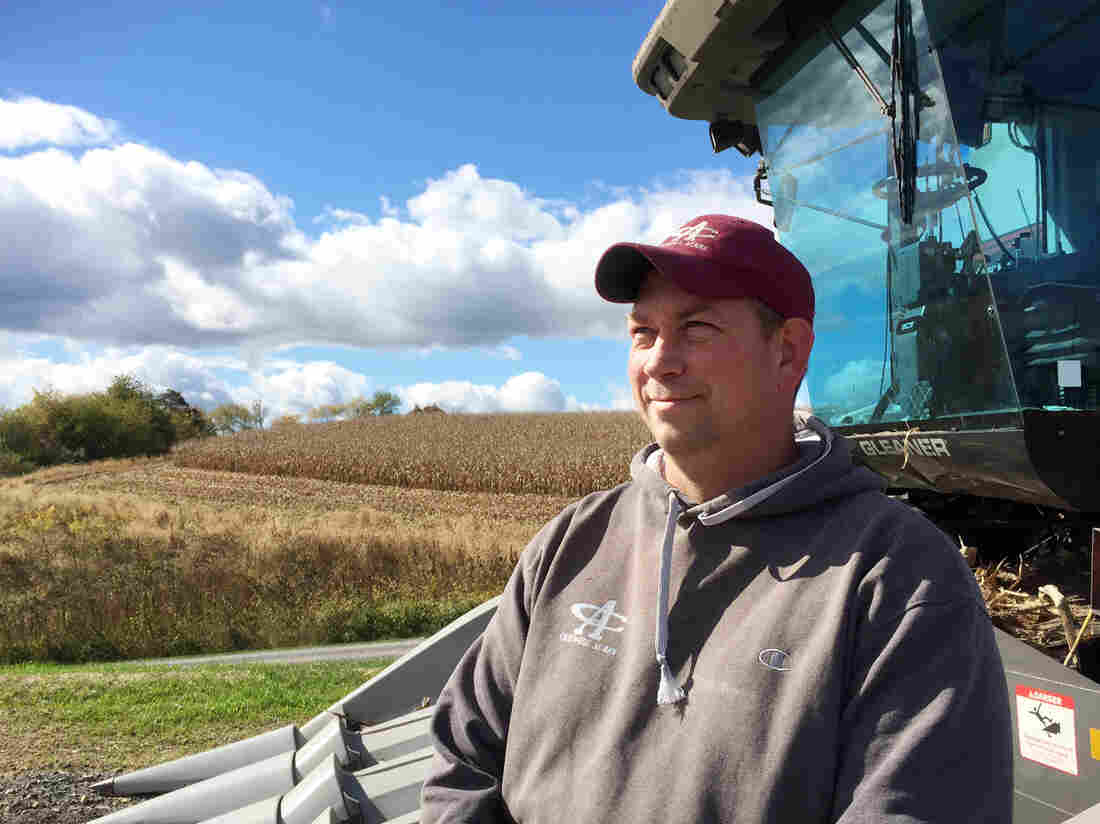 Lucas Criswell farms close to 2,000 acres in Pennsylvania's Susquehanna Valley. He has stopped using neonic-treated seeds on some of his crops. Allison Aubrey/NPR hide caption 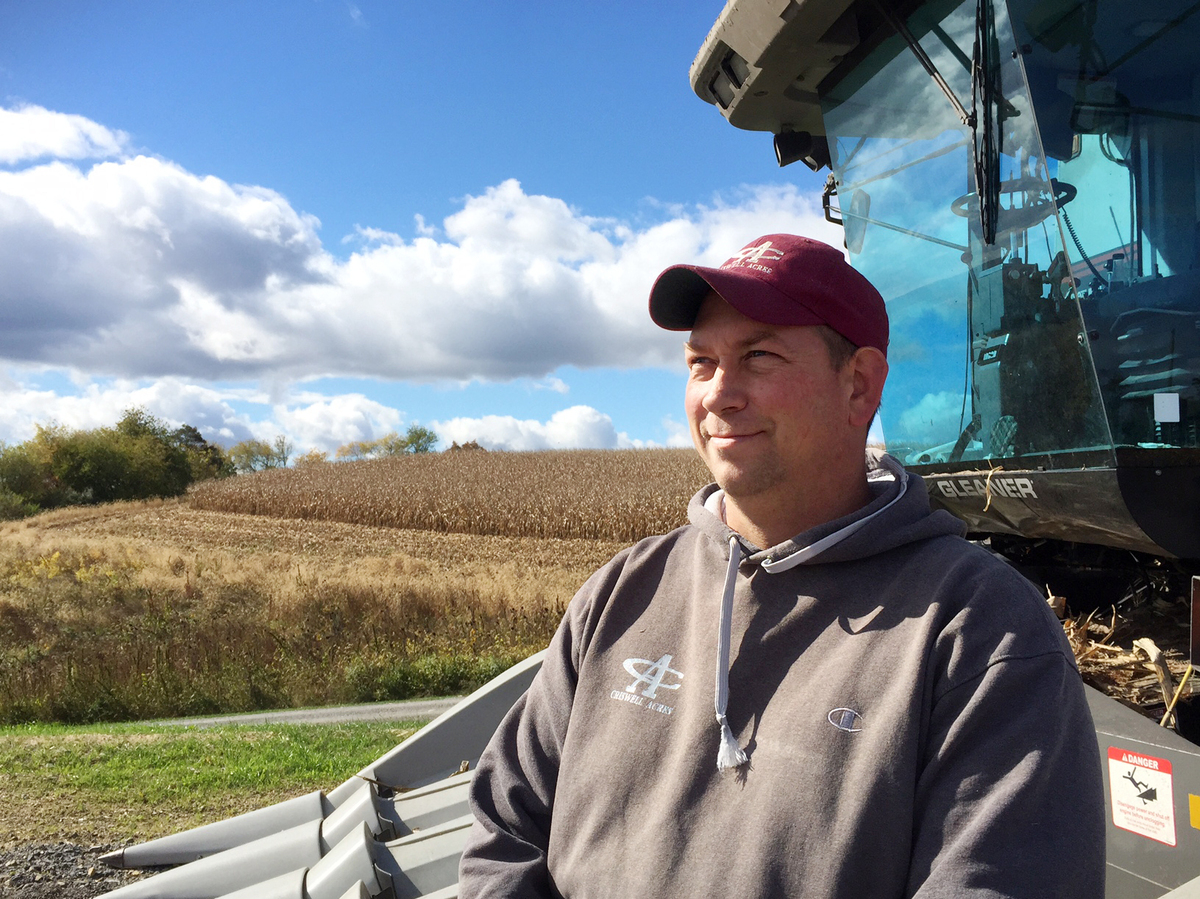 Lucas Criswell farms close to 2,000 acres in Pennsylvania's Susquehanna Valley. He has stopped using neonic-treated seeds on some of his crops.

It's estimated that somewhere between 80 and 95 percent of all corn planted in the U.S. — and about half of soybean crops — come from seeds pretreated with pesticides. And there's concern about overuse.

"The level of use is way out of step with the level of [pest] threat in most fields where we've worked," Christian Krupke, an entomologist at Purdue University, told me as part of a collaborative report with PBS NewsHour. (It airs Tuesday night on PBS.)

Krupke published a study several years back that linked bee deaths with pesticide-laden dust that flies up during the planting of the pretreated seeds.

But one of the leading manufacturers of neonicotinoids, Bayer Crop Science, says it has found a way to reduce that problem: a seed lubricant that reduces the dust.

Bayer says that, outside of acute exposures, neonicotinoids are not harmful to bees. David Fischer, Bayer's chief scientist, told us that when neonics are used as part of a seed treatment, the pesticide residues that get into the plants are in a "safe range" for bees.

"The body of evidence suggests there's no link between neonic exposure, neonicotinoid use, and bee decline or bee health," Fischer says.

He argues that varroa mites, not pesticides, are responsible for many of the problems bees face.

"Eighty percent of the problem is varroa mites, and the viruses and diseases" that the mites bring, Fischer says.

And the industry stands behind the safety of the pesticides. "Ongoing research and field studies have consistently found no adverse effects on bee colonies when pesticides are applied according to label directions," concludes Crop Life America, an industry trade group.

But, the findings of some recent studies challenge this conclusion.

For instance, a study published in the journal Science found bees exposed to neonicotinoid pesticides seemed less able to navigate their way back to their hives. And another study documented negative effects on populations of wild bees in seed-treated fields and in surrounding meadows.

Last month, a study published in Nature found that neonicotinoid pesticides affect honeybee queens. The researchers wrote that the "reproductive anatomy (ovaries) and physiology [of neonicotinoid exposed queens] were compromised." 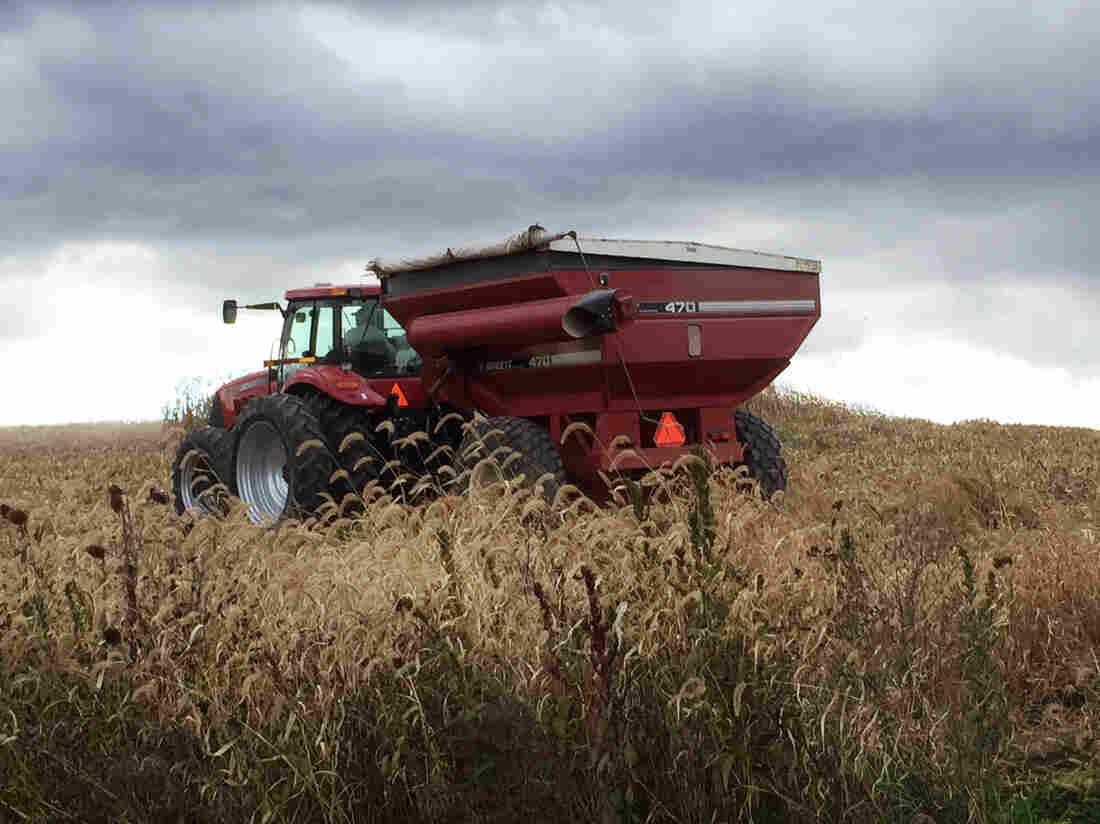 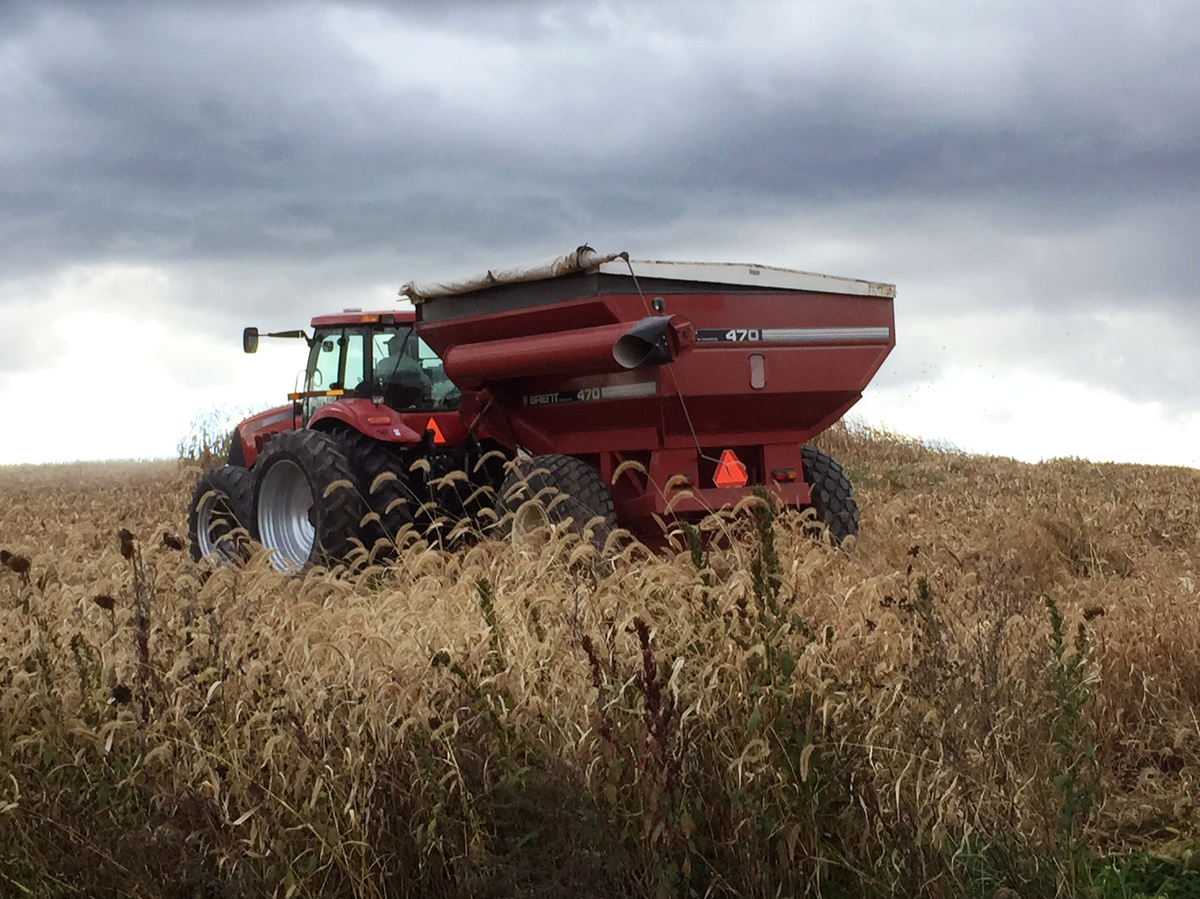 Queen health is critical to the health of the colony, says Williams. "Our study shows it's possible that these pesticides can play a role in reducing queen health."

Bayer's Fischer says he's not convinced by Williams' findings. He says the study has "a lot of technical flaws in it, and I think it needs to be repeated."

The industry has challenged the findings of studies conducted in laboratory settings. Industry scientists argue that lab-based studies don't capture what happens in the field.

Could A Mushroom Help Save The Honeybee?

But, as a spate of studies point in the direction of harm, the industry has stepped up efforts to promote the work it's undertaking to promote bee health.

Both companies are planting millions of flowers in the U.S. to increase bee forage. And in 2014, Bayer opened a $2 million Bee Care Center in North Carolina. (Bayer earned a reported $3.6 billion in total profits last year. The company told us it wouldn't disclose its sales of neonics only, but according to figures from 2009, Bayer's global sales of a neonicotinoid called imidacloprid alone totaled $1 billion.)

The industry is having to work harder to fend off criticism — and new regulation.

Earlier this year, Ontario, Canada, introduced new rules aimed at reducing the use of these pesticides.

The aim of the new rules is "to reduce the number of acres planted with neonicotinoid-treated corn and soybean seeds by 80 percent by 2017," according to a government release.

New rules will help ensure that the pesticide-treated seed "is only used when there is evidence of a pest problem," according to the release.

And, the European Union has had a partial ban of neonicotinoids in place for the past two years.

Now, the question some farmers are asking is: Do I really need these pesticides?

Lucas Criswell, who farms close to 2,000 acres in Pennsylvania's Susquehanna Valley, has stopped using neonic-treated seeds on some of his crops.

Several years back, Criswell got an outbreak of slugs eating his soybean crop. He worried that the pesticides were killing off the predators of slugs.

When entomologists at Penn State studied the issue, they found evidence that this could happen. As they reported in a study published last year, neonic "levels in field-collected slugs ... were still high enough to harm insect predators," such as beetles.

"Our research suggests that neonicotinoids can have unintended costs, even within crop production," John Tooker, associate professor of entomology at Penn State, said in a release about the paper.

Bayer's Fischer says he's aware of these findings, but he says the research was "conducted on a small plot on a research farm." Fischer says there's no data to show that this happens broadly.

And, Fischer says there's good evidence that neonicotinoids are beneficial to farmers. "They're extremely valuable," he says.

He says neonics "increase crop yields often by 20 percent, versus the other competitors. So they contribute billions of dollars to the ag economy in the United States." He points to this industry-supported analysis that supports this conclusion.

But Pennsylvania farmer Lucas Criswell is not convinced. He says his corn crop is strong — without using neonic-treated seeds. "We've been getting pretty good yields," Criswell told us — "definitely comparable" to yields from pesticide-treated seeds, he says. And, he says he's saving money, since he's paying less for the untreated seeds.

Now, instead of using the pesticide prophylactically in a pretreated seed, he uses a field scout to keep an eye out for the pests he may need to treat. "So, it's not a blanket approach," he says. If he needs to use a pesticide, "it's a spot treatment."

These pretreated seeds are used so widely, they're almost ubiquitous in corn crops. Criswell says it was a challenge to find untreated seeds. "Typically," he says, "the [pesticide] just comes with [the seed] — even if it's not needed."

He likens the prophylactic use of neonics to taking an aspirin before you have a headache. "All it does is put something in your body that you do not need." He says it's the "same as putting something into the soil that we do not need. "

Criswell says he knows that other farmers may benefit from the pesticides, but he says his crops aren't beset by many of the insects that the neonics are intended to treat.

The Environmental Protection Agency is currently re-evaluating the neonicotinoid family of pesticides. The president's task force on pollinators has asked the EPA to expedite the review. And the agency has "temporarily" halted the approval of new uses of neonicotinoids.